Despite over 90% of the United States population having some form of health insurance, medical debt remains a persistent problem. For people and families with limited assets, even a relatively small unexpected medical expense can be unaffordable. For people with significant medical needs, medical debt may build up over time. People living with cancer, for example, have higher levels of debt than individuals who have never had cancer.

High deductibles and other forms of cost sharing can contribute to individuals receiving medical bills that they are unable to pay, despite being insured. People with medical debt report cutting spending on food, clothing, and other household items, spending down their savings to pay for medical bills, borrowing money from friends or family members, or taking on additional debts. 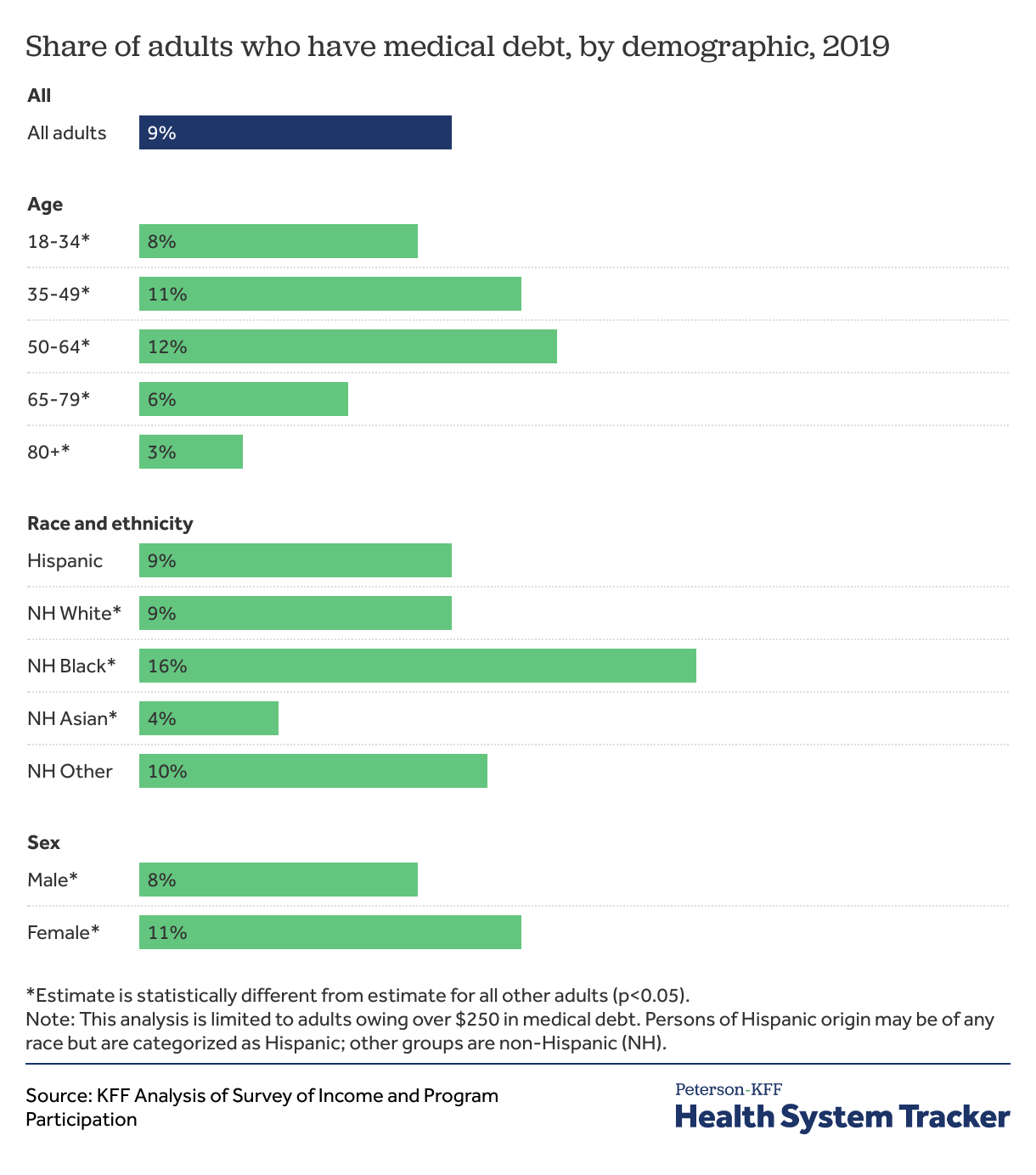 Women are also more likely to report having medical debt (11%) than men (8%). Some of this difference is likely related to childbirth expenses and lower average income among women than men. 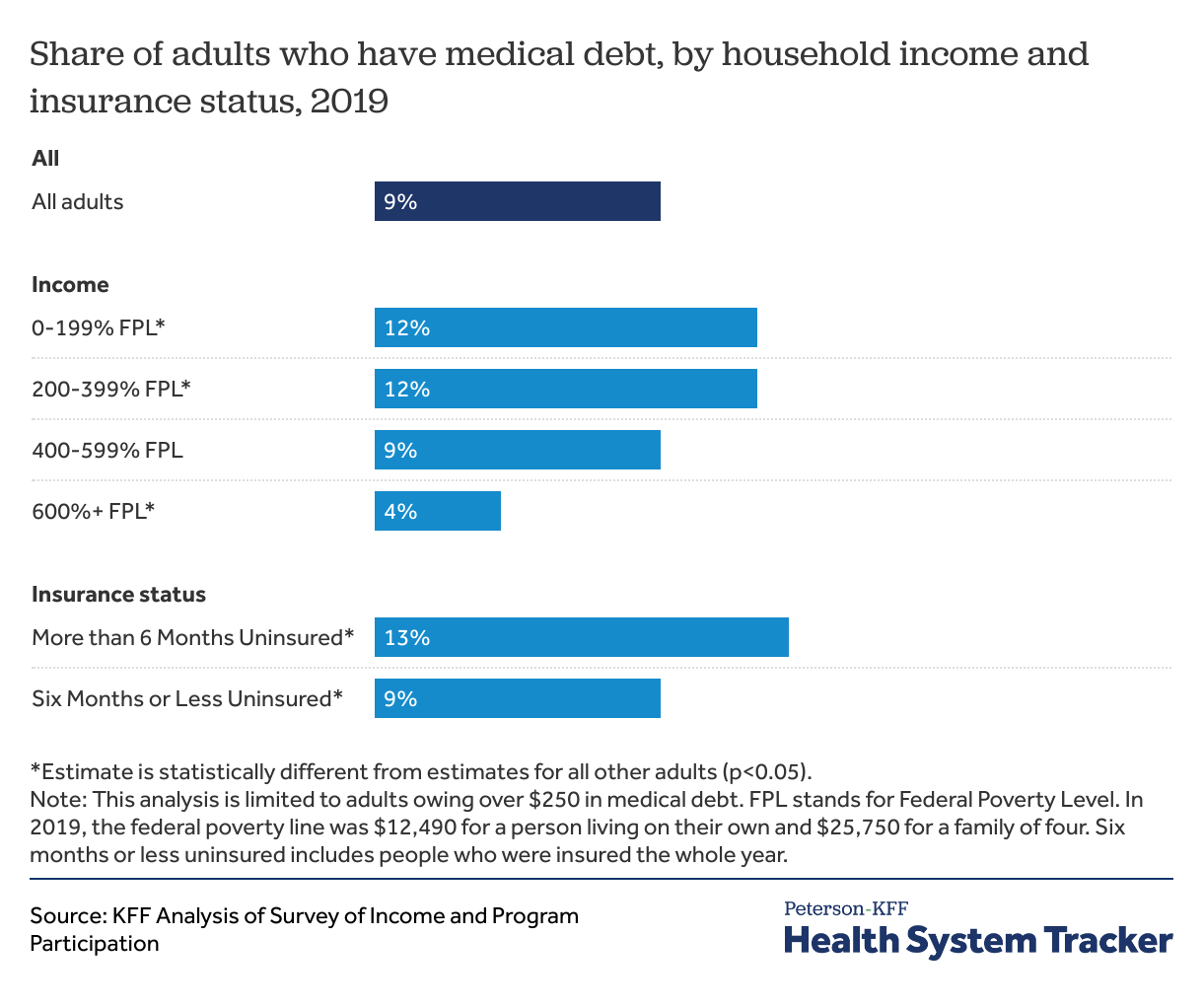 Most people in the United States are insured, but adults who were uninsured for more than six months in a year are more likely to report having significant medical debt (13%) than those who were insured the full year or uninsured for half of the year or less (9%). 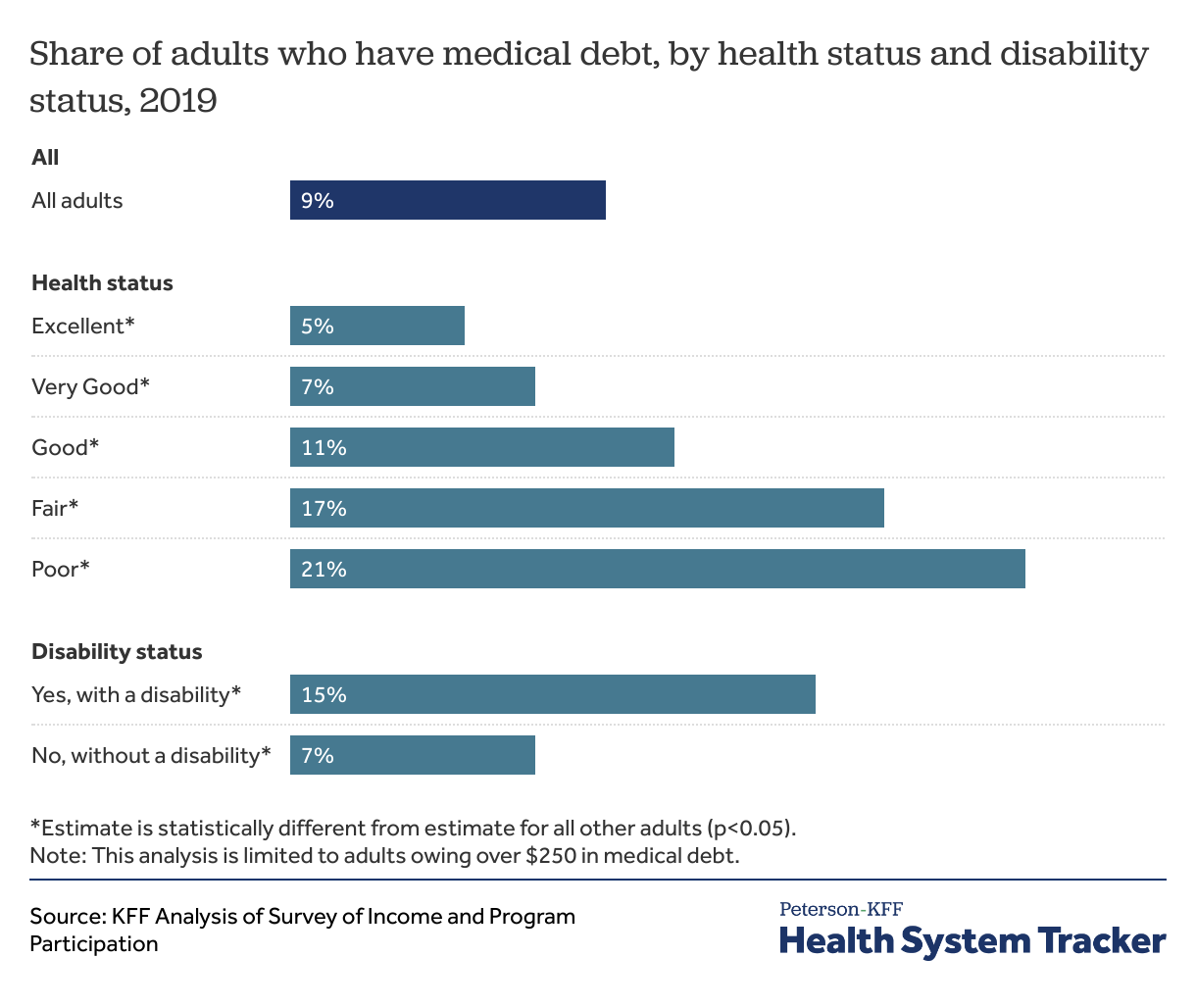 People with complex heath needs that require ongoing care can see medical bills pile up over time. Those in worse health or those living with disabilities may also experience unemployment or income losses, further contributing to their difficulty affording medical bills. We find that adults living with a disability are more likely than those without a disability to report owing over $250 in medical debt (15% vs. 7%). Similarly, people who report their health status is “fair” or “poor” are more likely to say they owe significant medical debt than those who say they are in “very good” or “excellent” health.

People living in rural areas, in the South, and in Medicaid non-expansion states are more likely to have significant medical debt 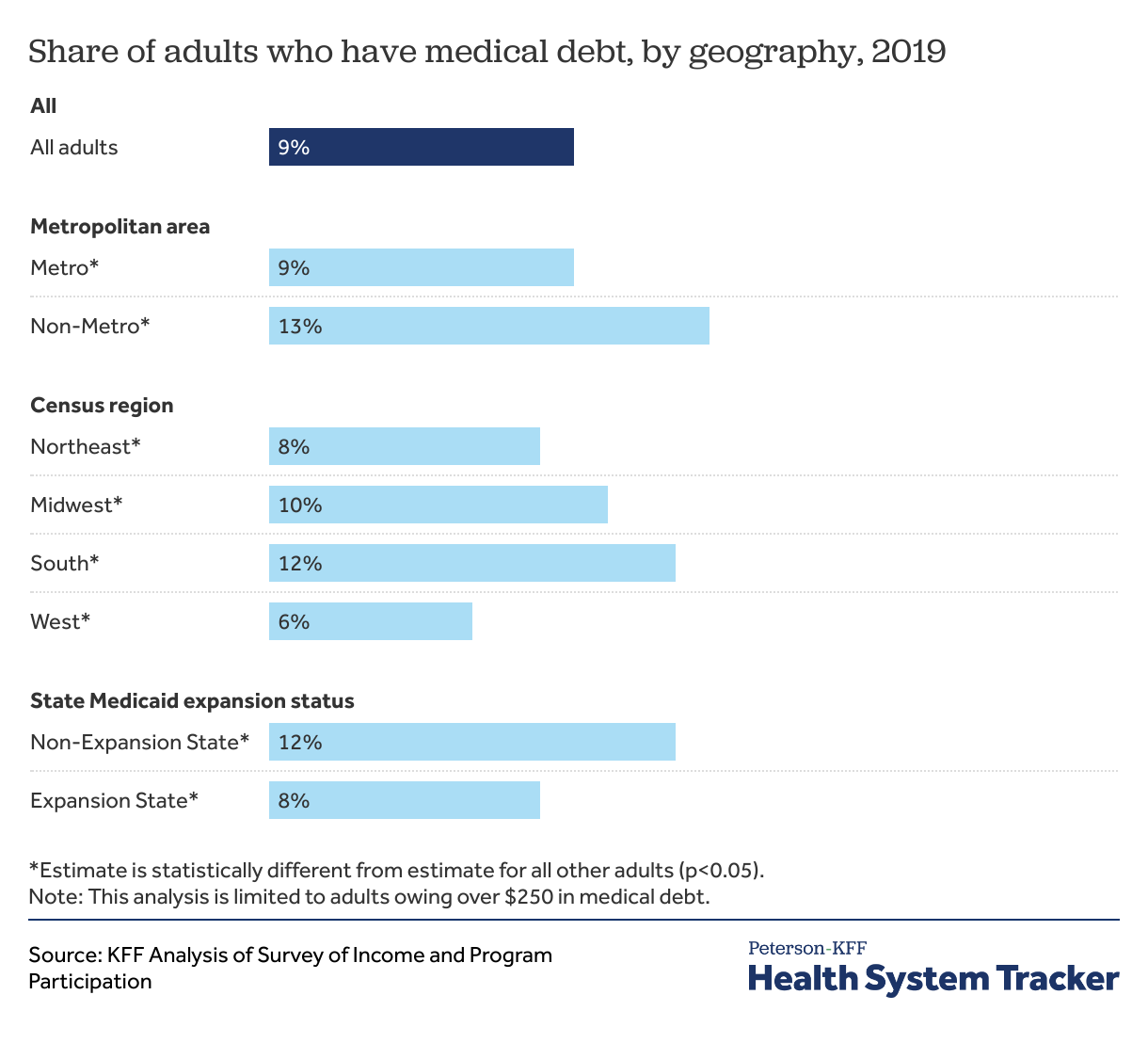 The burden of medical debt is not distributed equally across the country. People living in rural areas, in the South, and in states that did not expand Medicaid under the Affordable Care Act were more likely to report having significant medical debt.

Health status and income are both key factors in medical debt 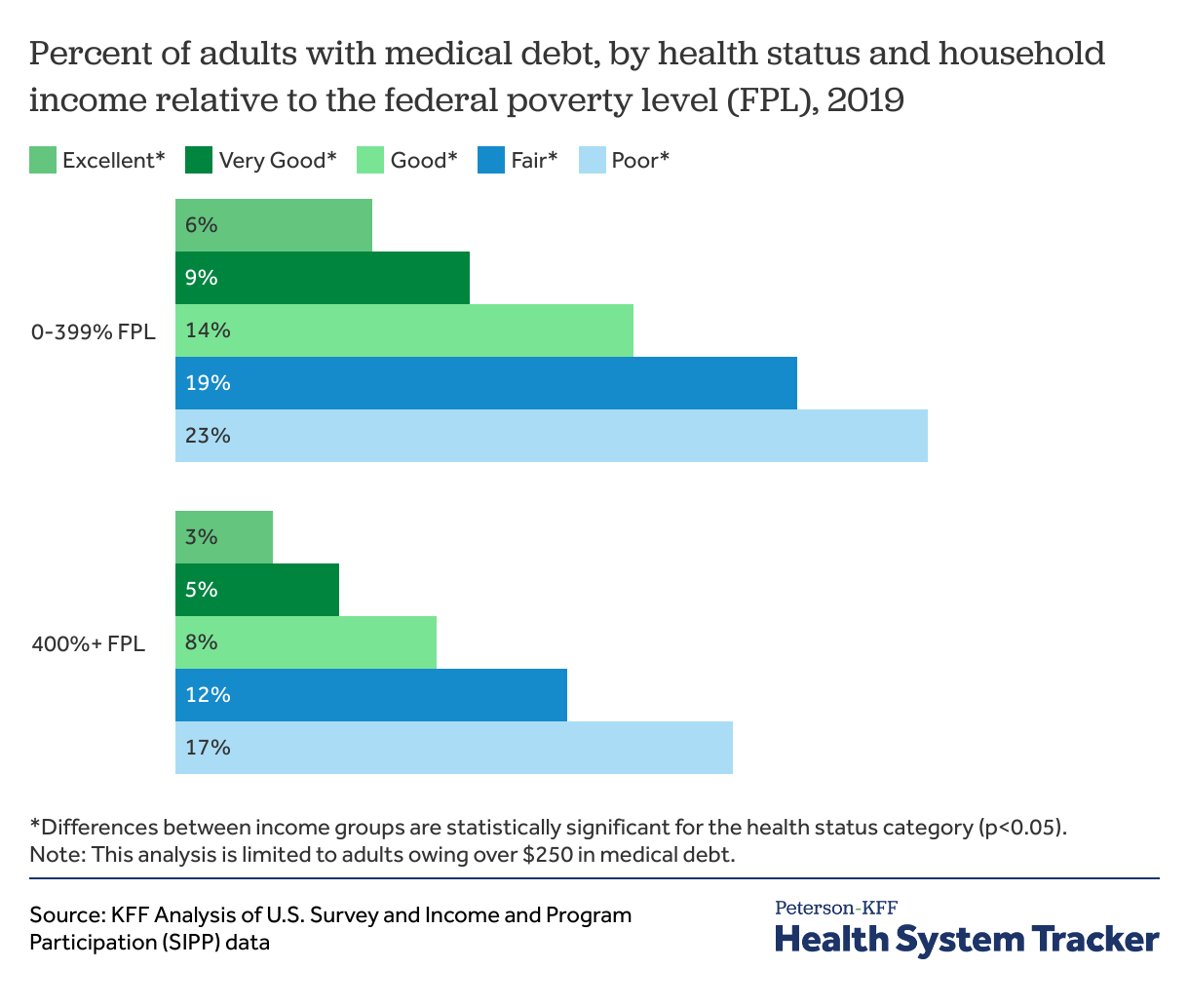 The chart above highlights the interaction between income and health status. Adults in worse health are more likely to report significant medical debt when they are also lower- or middle-income. For example, 23% of people in poor health with household incomes under 400% of poverty had over $250 of medical debt, compared to 17% of adults in poor health with incomes at 400% or more of poverty.

Most people with significant medical debt owe over $1,000 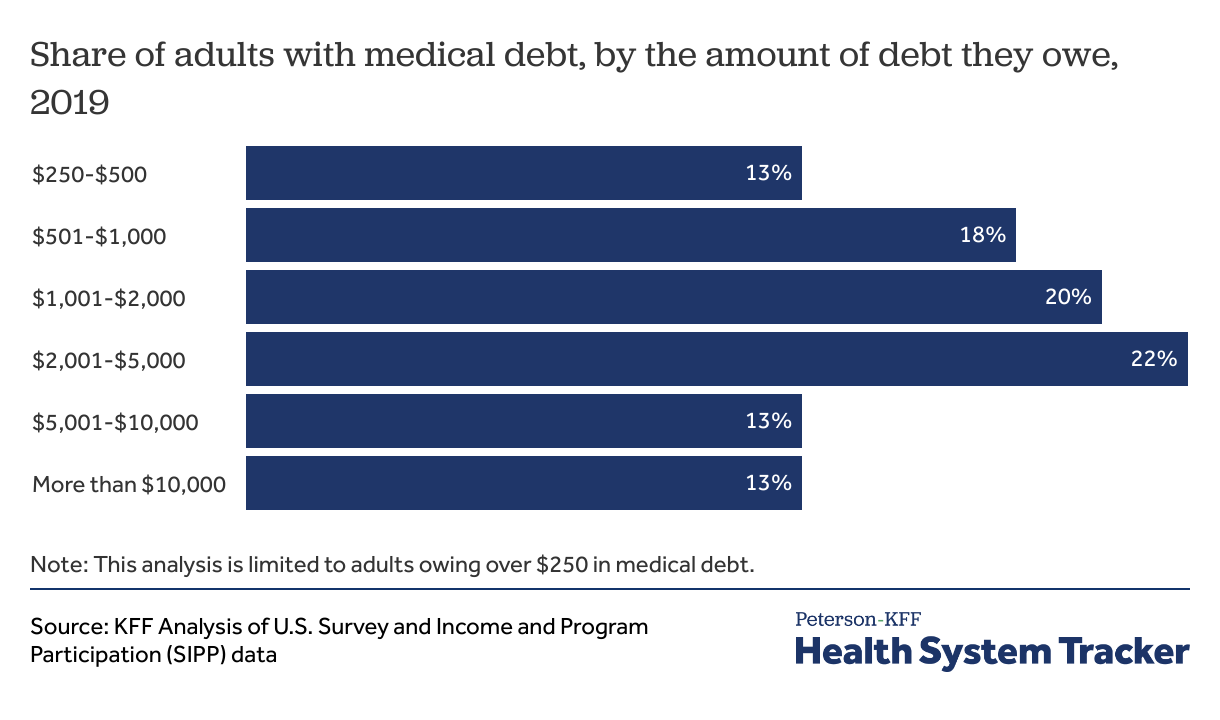 People in the U.S. owe at least $195 billion in medical debt and the bulk of that debt is owed by people with over $10,000 in debt 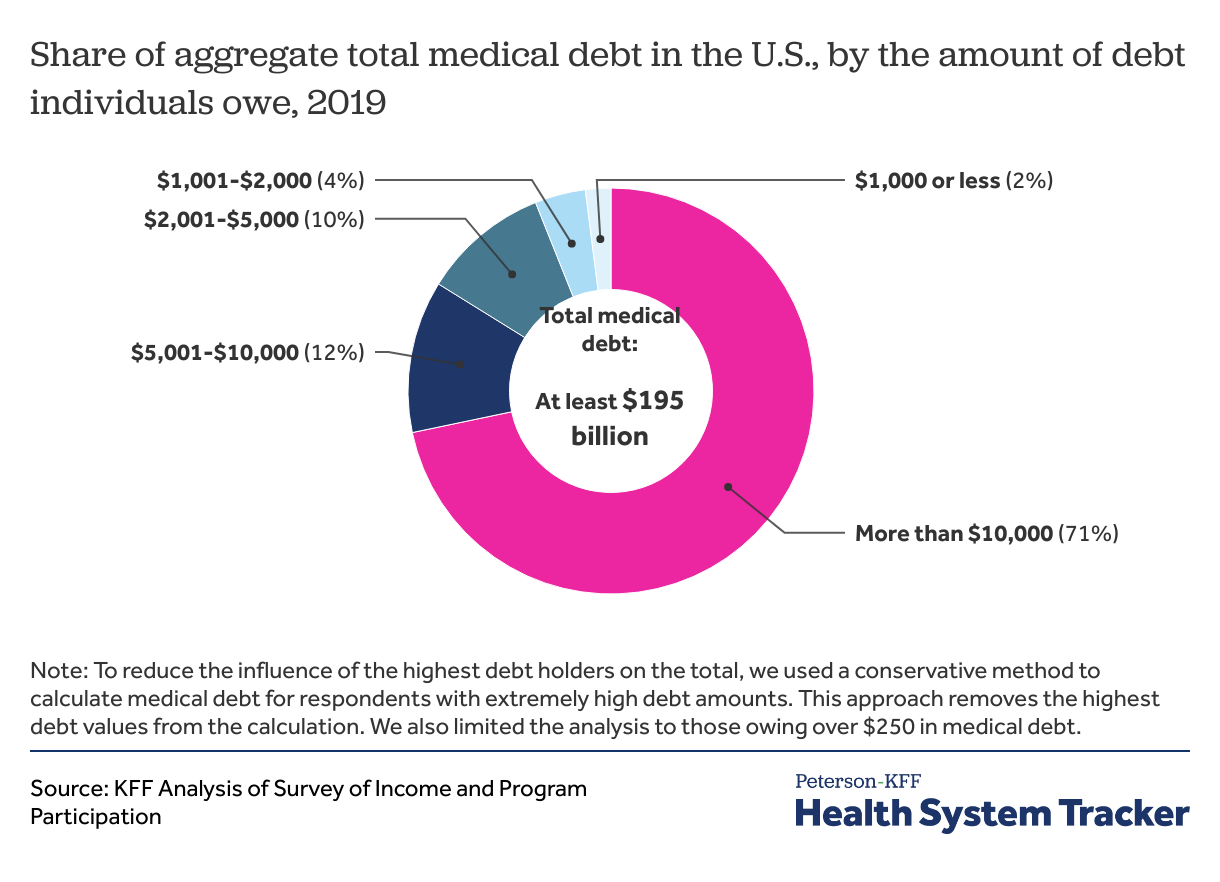 Medical debt remains a persistent problem even among people with insurance coverage. Most Americans have private health insurance, which generally requires payment of a deductible, coinsurance, and copays for medical services and prescriptions. A serious injury or illness can cost thousands of dollars out-of-pocket to meet these deductibles and other cost-sharing requirements. For people with a chronic illness, even smaller copays and other cost-sharing expenses can accumulate to unaffordable amounts. Insured patients can also incur medical debt from care that is not covered by insurance, including for denied claims, and for out-of-network care.

Many Americans, even those with private health insurance, do not have enough liquid assets to meet deductibles or out-of-pocket maximums. Among single-person privately-insured households in 2019, 32% did not have liquid assets over $2,000. Among multi-person households where at least one household member has private insurance, 20% did not have liquid assets over $2,000. Additionally, 16% of privately-insured adults say they would need to take on credit card debt to meet an unexpected $400 expense, while 7% would borrow money from friends or family. For these people, even a medical bill for a few hundred dollars can present major problems. KFF surveys and other studies find that people with unaffordable medical bills are more likely to delay or skip needed care in order to avoid incurring more medical debt, cut back on other basic household expenses, take money out of retirement or college savings, or increase credit card debt.

Medical debt can happen to almost anyone in the United States, but this debt is most pronounced among people who are already struggling with poor health, financial insecurity, or both. People who are very ill or living with a disability are also at risk of losing their employment or income due to illness. Shortcomings in both insurance coverage and social safety net programs aimed at replacing income during a time of illness can compound to increase the likelihood that sicker people end up with large amounts of medical debt. There are also significant racial disparities, with Black Americans being much more likely than people of other racial or ethnic backgrounds to report owing significant medical debt.

It is not yet clear how the pandemic and resulting recession affected medical debt in the United States. On one hand, many people lost employment and income early in the pandemic, which could have led to more difficulty affording medical care. On the other hand, many people delayed or went without care, so fewer people may have been exposed to costly medical care. Additionally, there was a small shift from employer-based coverage to Medicaid, which has little or no cost-sharing. Most private plans also voluntarily waived COVID-19 treatment costs early in the pandemic. In total, out-of-pocket health spending in the U.S. dropped by about 4% from 2019 to 2020.

As of January 2022, surprise medical billing is now banned in most cases by the No Surprises Act. However, “surprise bills” represent just a fraction of the unexpected and large medical bills many Americans face.

The fact that medical debt is a struggle even among households with health insurance and middle incomes indicates that simply expanding coverage will not erase the financial burden caused by high cost-sharing amounts and high prices for medical services and prescription drugs.

The Survey of Income and Program Participation (SIPP) is a nationally representative survey of U.S. households. The 2020 survey asked people age 15 and older in the household whether they owe any money for medical bills not paid in full as of December 2019. Respondents are asked to exclude bills that will likely be paid by the insurance company. Households may include non-related persons cohabiting together. Respondents younger than age 15 were not asked about medical debt.

Our analysis is at the individual level for adults age 18 and over. In order to identify households carrying more than small levels of debt, we looked at the share adults (age 18 and up) who reported that they owe over $250 in medical debt. Medicaid non-expansion states include those that had not expanded Medicaid under the Affordable Care Act and begun enrolling expansion eligible people by the end of 2019. People with a disability are those who have difficulty with one or more of the six daily tasks (difficulty with hearing, seeing, cognitive, ambulatory, self-care, or independent living). See the SIPP technical documentation for additional details.