In a given year, a small portion of the population is responsible for a very large percentage of total health spending. We tend to focus on averages when discussing health spending, but individuals’ health status – and thus their need to access and utilize health services – varies over the course of their lifetimes. In fact, very few people have spending around the average.

This collection of charts is continuously updated and explores trends in health spending variation across the population through an analysis of the Medical Expenditure Panel Survey (MEPS) data. The most recent year of available data is 2019.

Most people reported being in good or better health 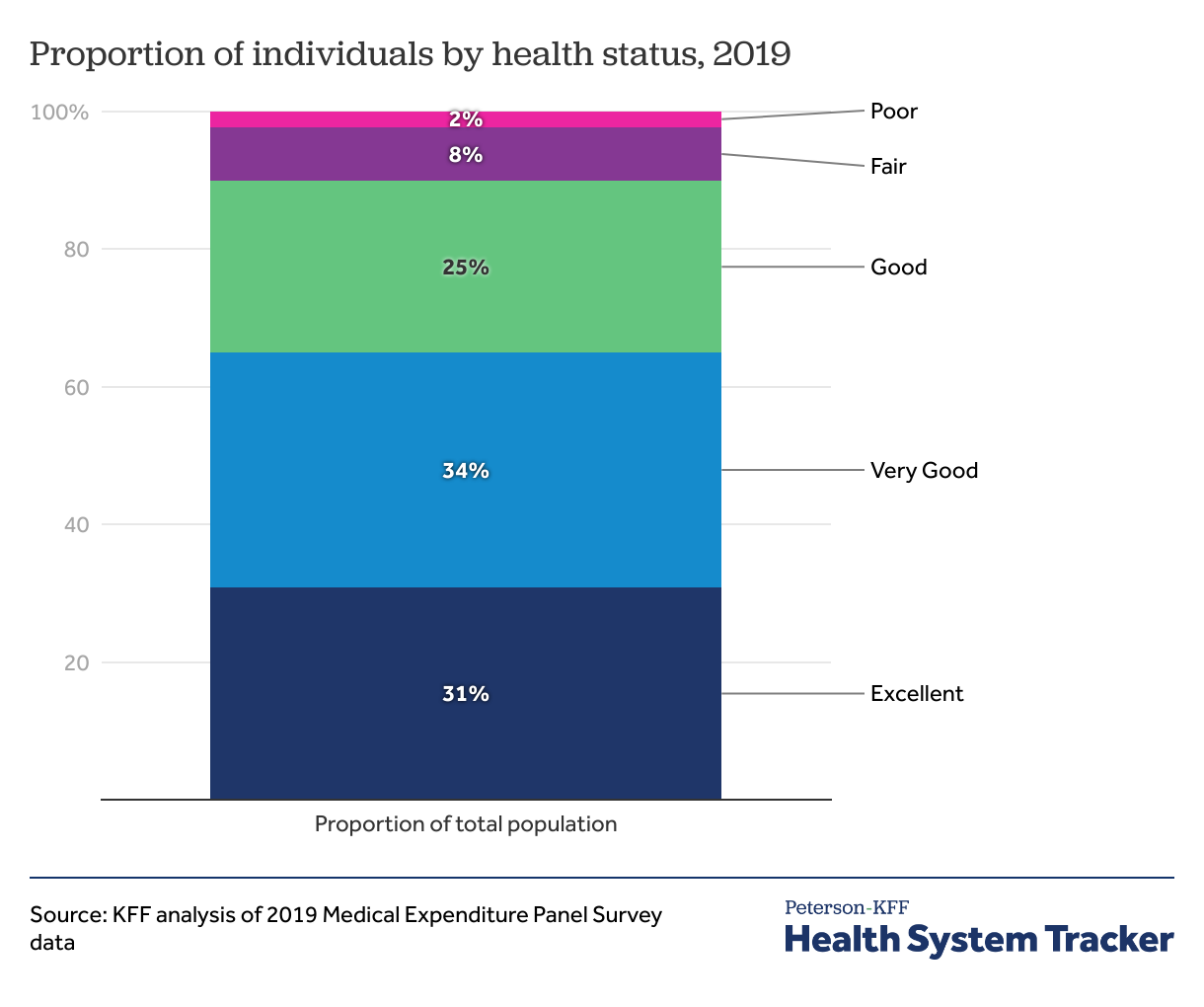 In the U.S., most of the population (90%) reported “good” or better health. Only 2% reported being in poor health.

As people age, they are more likely to experience health complications and utilize health services. Among people age 65 and over, 20% report their overall health as “fair” or “poor.” 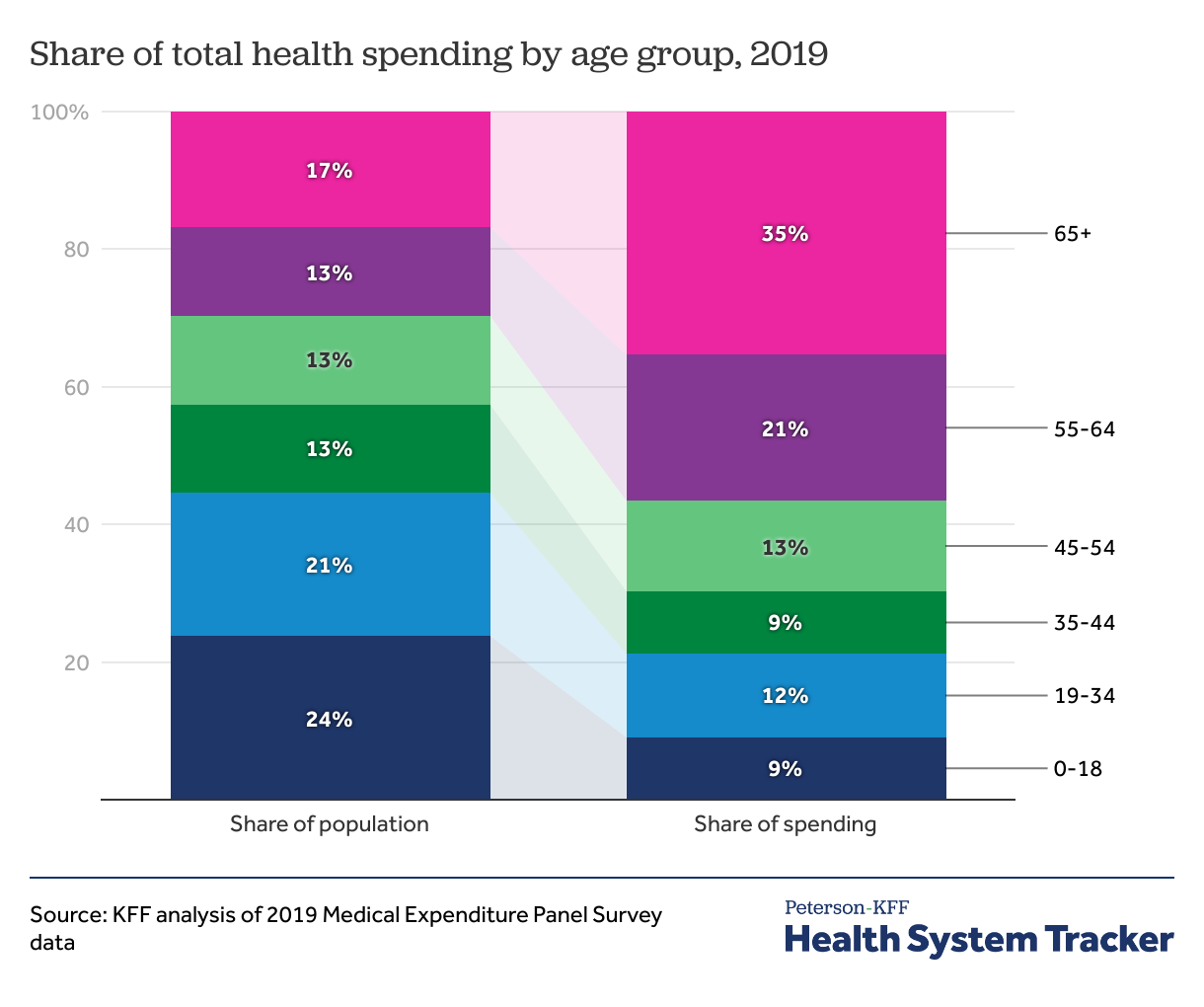 While there are people with high spending at all ages, overall, people 55 and over accounted for 56% of total health spending in 2019, despite making up only 30% of the population. In contrast, people under age 35 made up 45% of the population but were responsible for only 21% of spending.

A small share of the population incurs most of health spending, including among older adults and people reporting fair or poor health status 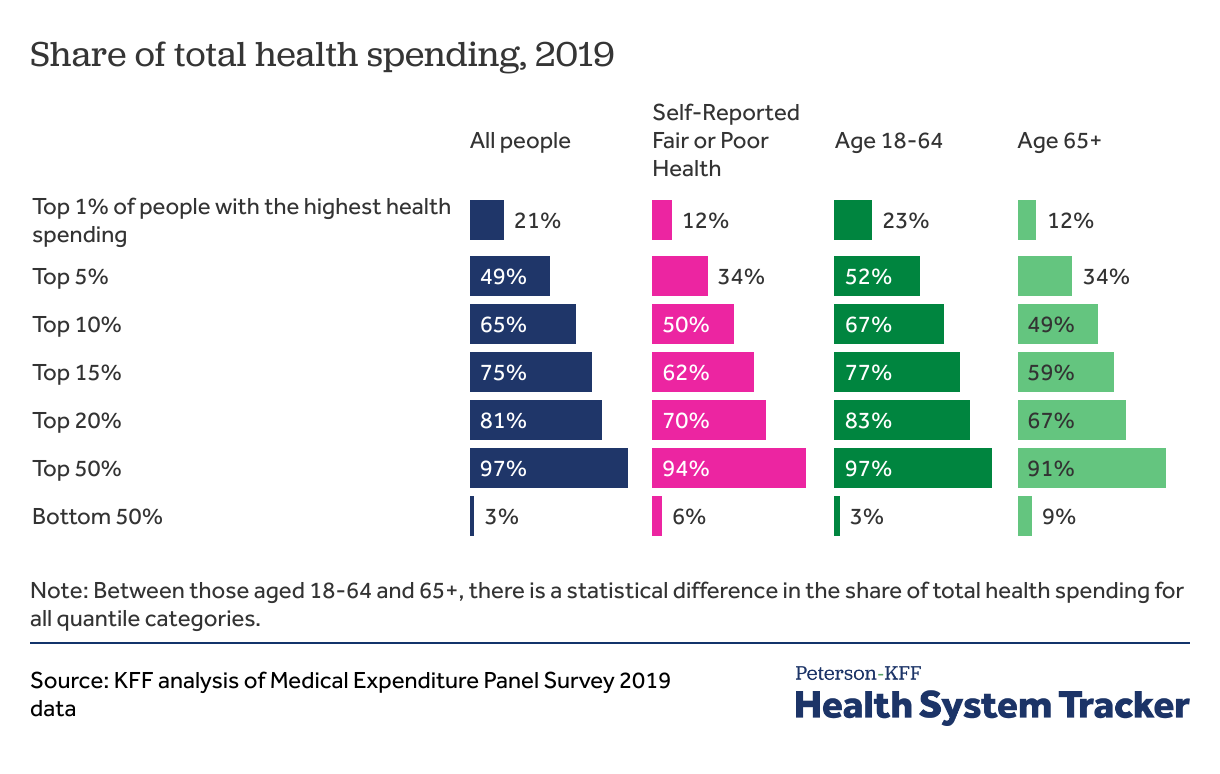 A small portion of the population accounts for a large share of health spending in a year. Although we tend to focus on averages, few people have spending around the average, since individual health needs vary over the life course. Some portion of the population (older adults and those with serious or chronic illnesses) require more and higher-cost health services than those who are younger or otherwise typically in need of fewer and less costly services.

Health spending is concentrated even within populations with relatively high average health costs. Among people reporting fair or poor health, the top 10% of people with the highest health spending accounted for 50% of total health spending. 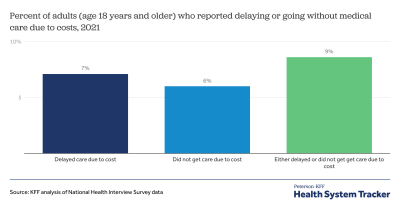 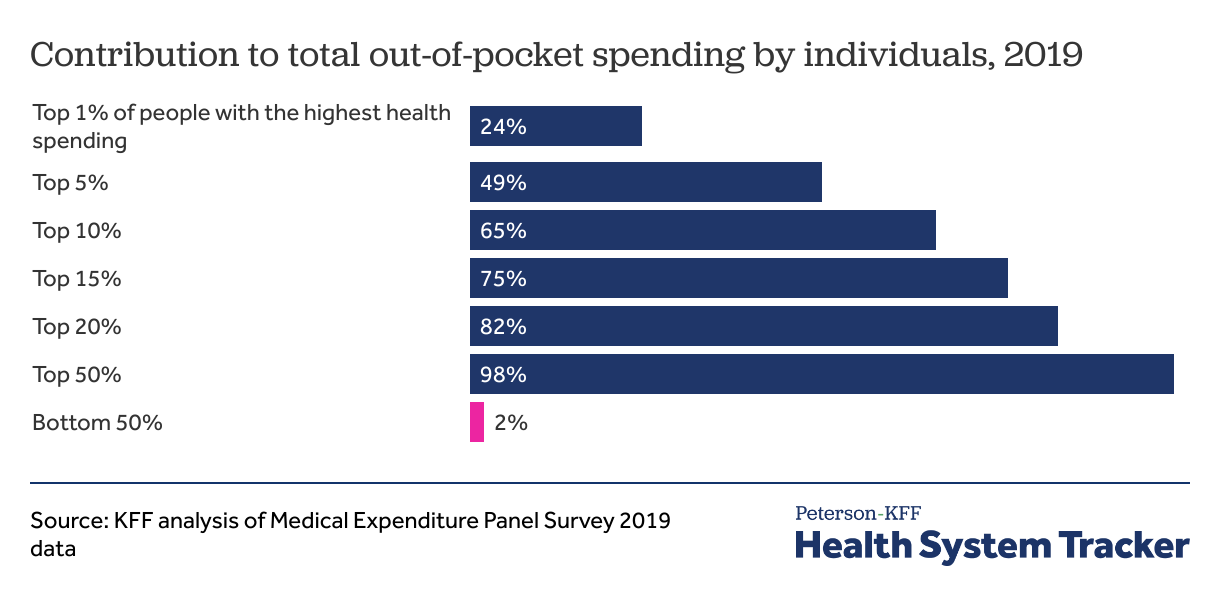 On average, patients with high needs have higher spending across all types of health services 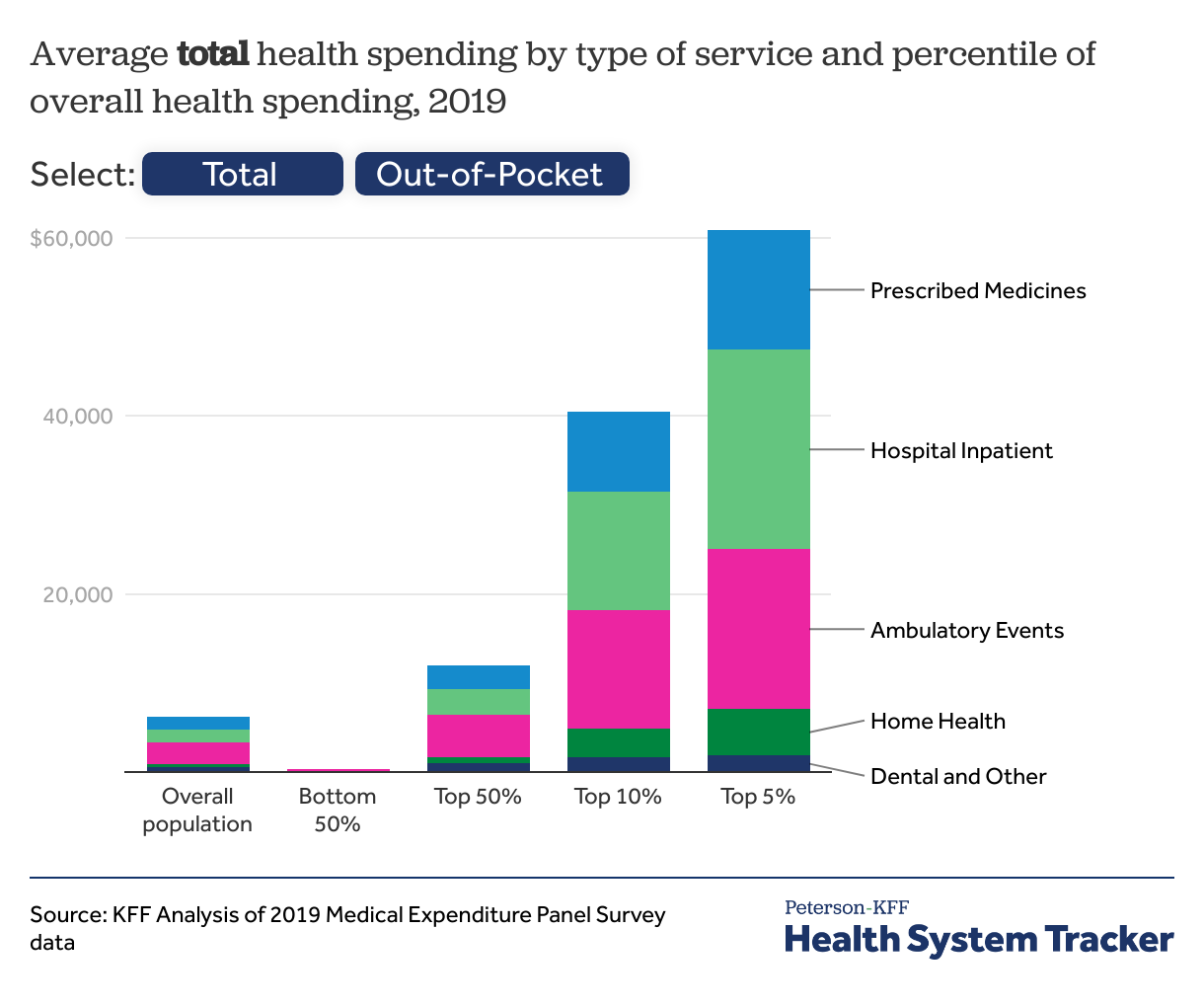 When it comes to inpatient spending, the people in the bottom 50% of spending had virtually no inpatient expenses, compared to over $22,000 annual inpatient spending for people in the top 5%. The patients with the highest health spending also have higher prescription drug spending. On prescription drugs, individuals in the top 5% had average health spending of over $13,000 a year, compared to the overall average of almost $1,400.

Health costs increase as individuals grow older, and this trend persists by insurance status and sex 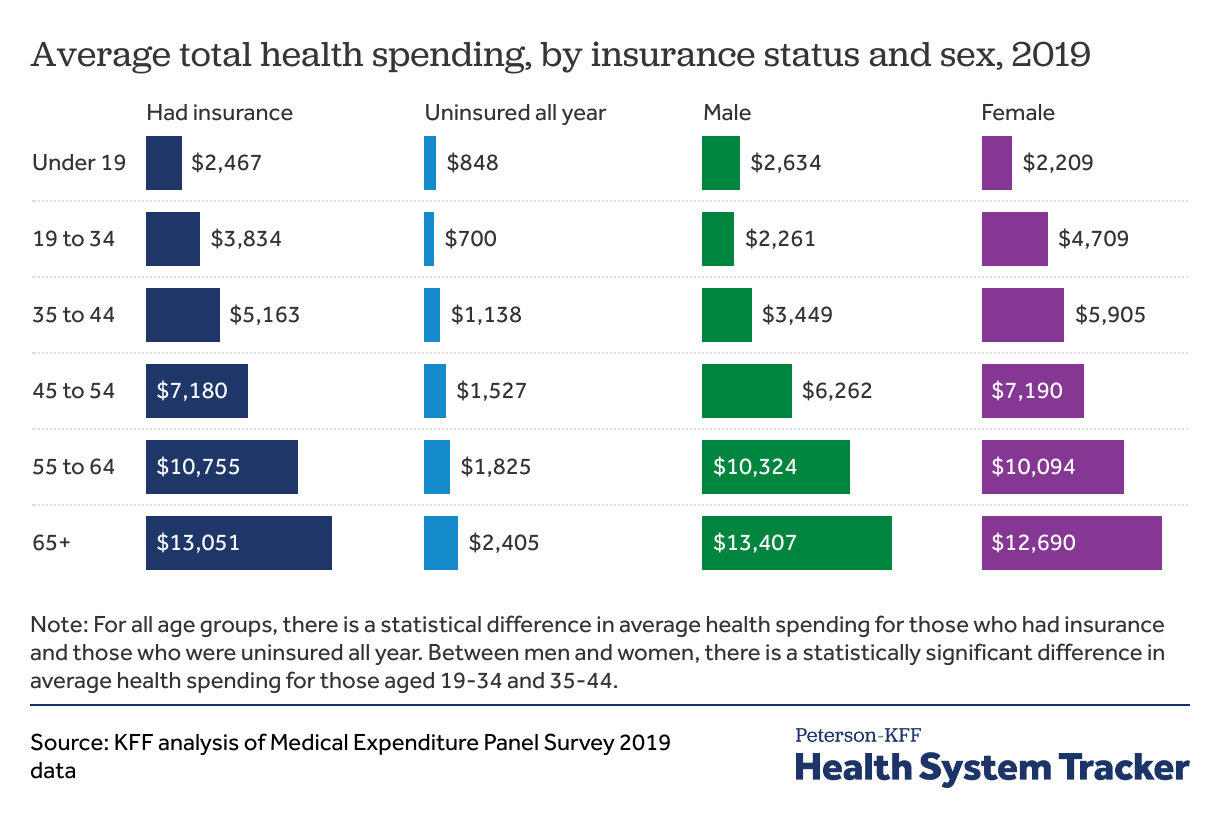 White people in the U.S. have higher health spending than those in other racial and ethnic groups 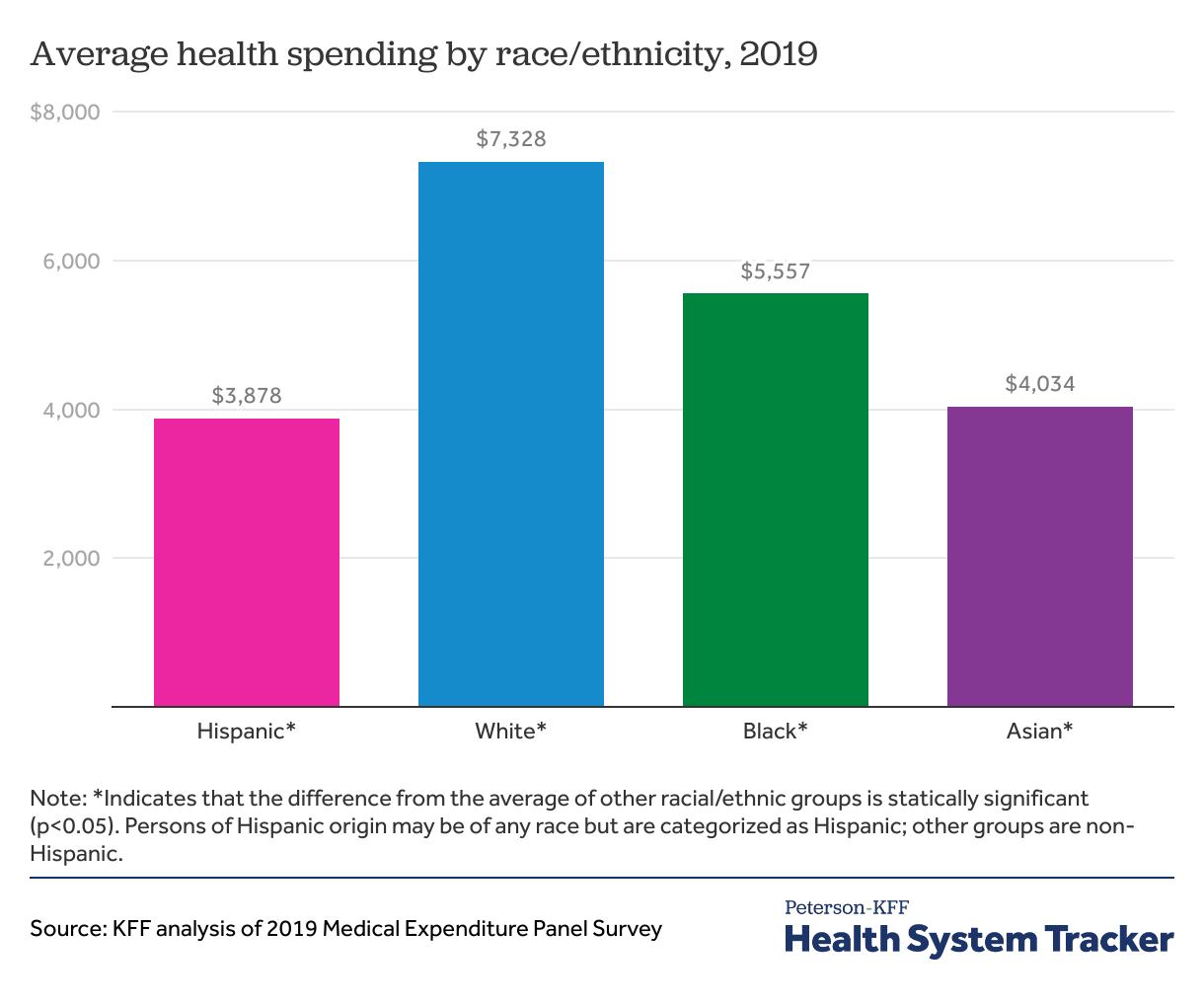 Overall, White people in the U.S. have significantly higher average total health spending than other race and ethnicity groups. People who identified as either Asian or Hispanic had the lowest average health spending in every age category. Differences in health spending by race may be driven by a variety of factors, including health status, insurance coverage, age distribution, and access to care. People of color are younger, on average, than White people, Hispanic people are more likely to be uninsured, and Hispanic and Black people are more likely to report delaying or going without medical care due to costs. Private health plans tend to pay higher prices for services than public plans do. About three in four Asian and White people are enrolled in private health plans at some point in a given year, while about one in two Black and Hispanic people are covered by private plans at some point in a given year.  Immigrants have lower health spending on average than those born in the United States. Asian and Hispanic people have the highest shares of foreign-born populations at about 66% and 33%, respectively. 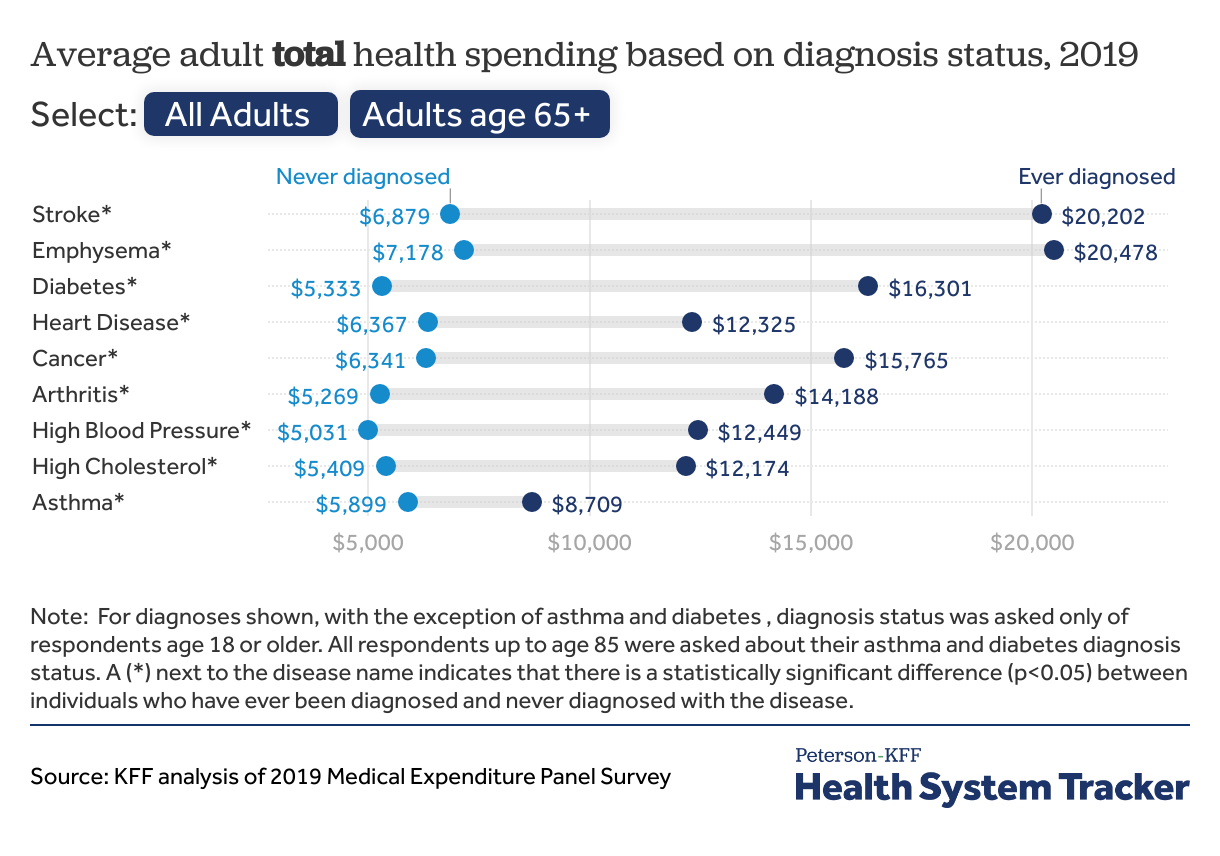 People with a current or prior diagnosis of certain chronic health condition(s) have much higher spending on average than people without these conditions. Current or prior diagnosis of chronic health conditions is also associated with higher health spending for adults over 65, though the difference is smaller on average when compared to the overall average among all adults. Emphysema is linked with the highest mean spending among those who have ever been diagnosed with a chronic condition. 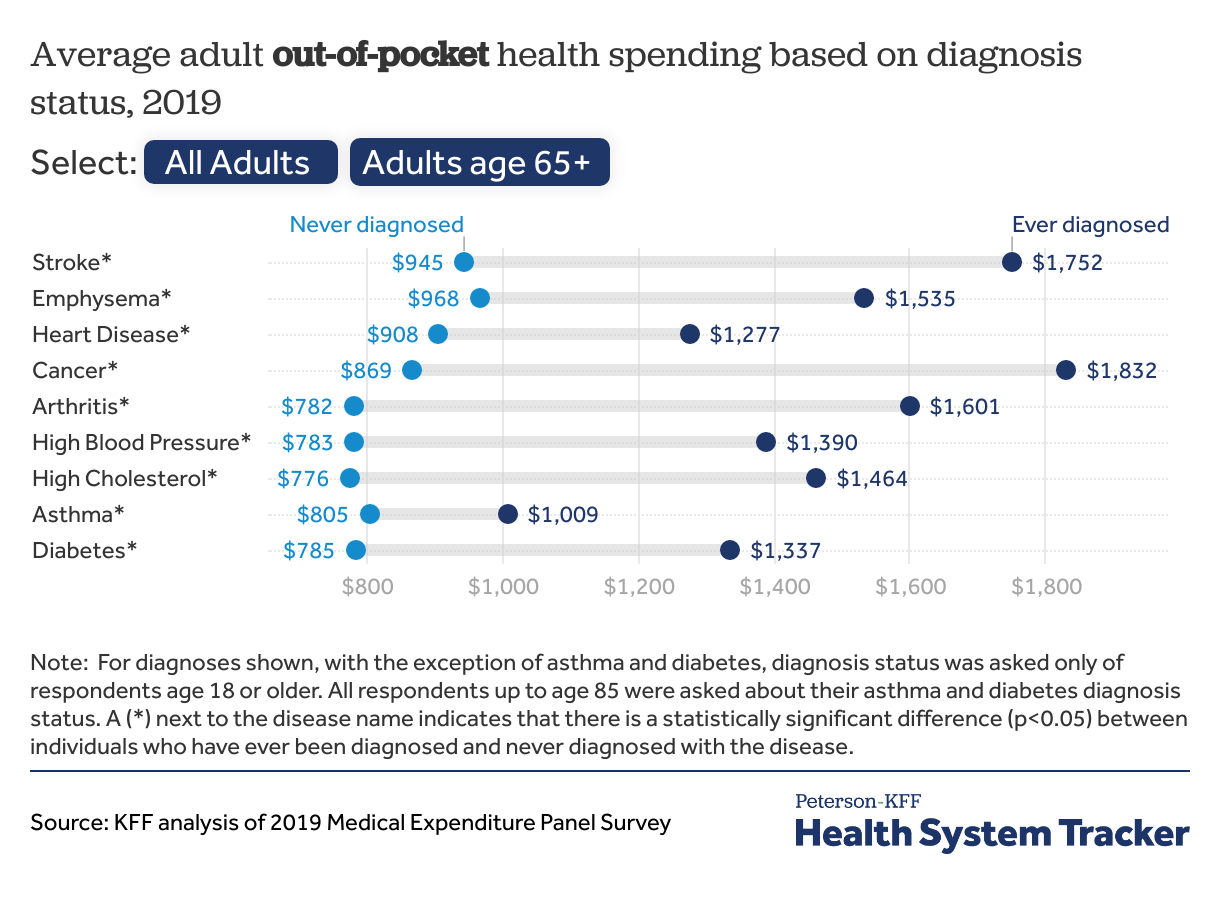 This collection of charts is based on the 2019 Medical Expenditure Panel Survey (MEPS) Household Component. MEPS is a nationally representative household survey of the U.S. civilian non-institutionalized population. Estimates account for the MEPS survey design, including the estimation weight, sampling strata, and primary sampling unit. Health spending includes individual out-of-pocket payments and payments made by payers for care provided during the year.