Health spending increased substantially in 2020, but is expected to grow moderately over time 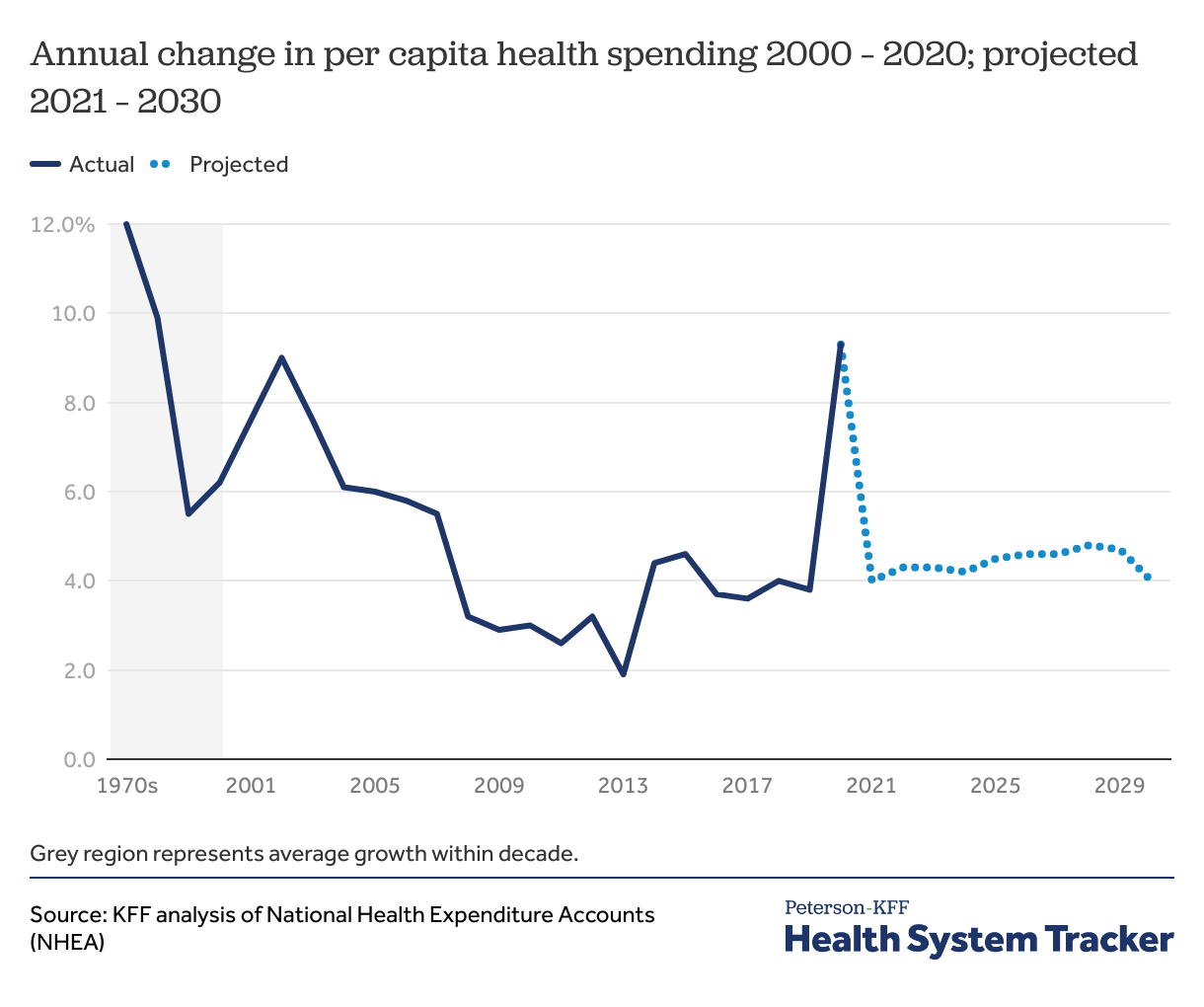 Each year, actuaries from the Centers for Medicare and Medicaid Services (CMS) project future spending on health. Looking ahead to the coming years, there remains a great deal of uncertainty around the future need for acute COVID-19 treatment, vaccinations or boosters, and the long-term health effects of the virus. New variants and new treatments add even more uncertainty.

Additionally, the pandemic has had indirect effects on the health system that make projections difficult. COVID-19 has led to new costs for testing and treatment, but has also caused other shifts in health spending. Some people missed or delayed routine care or cancer screenings earlier in the pandemic, for example, which could lead to pent-up demand for missed care, worsening health conditions, or more complex disease management going forward. New ways of delivering care, such as through telemedicine, could also shift spending patterns in the future.

Further, the recent broad-based inflation trends in the economy and health sector employment trends also add to the uncertainty of these projections.

With all this uncertainty, the CMS actuaries expect health spending to return to more normal growth rates in the coming years. They project that per capita health spending will grow at a rate of 4.5% on average from 2021 to 2030. 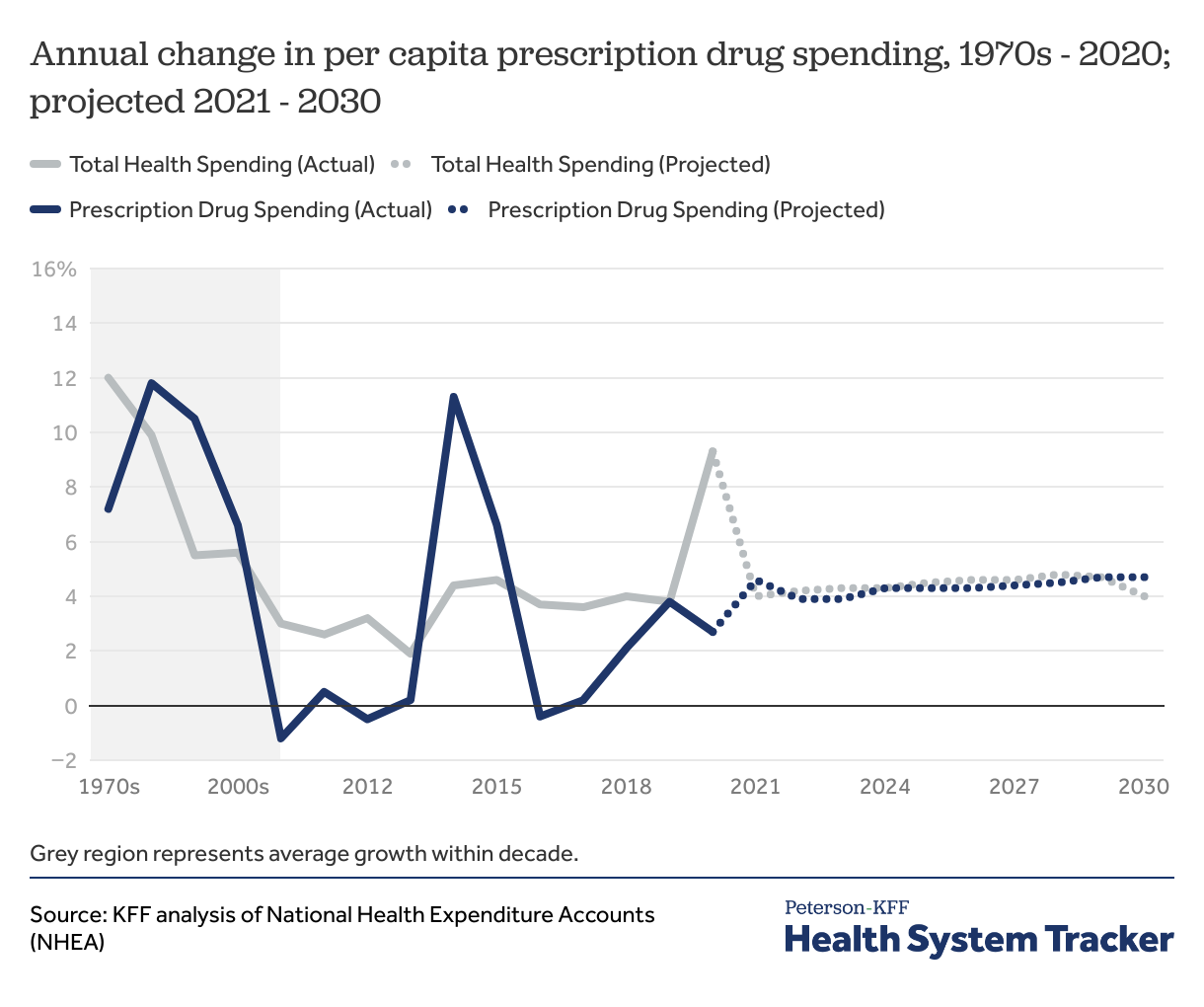 Looking ahead, CMS projects growth in per capita drug spending will be moderate from 2021 through 2030, averaging 4.3% per year. However, pandemic-related factors, such as the future need for COVID-19 vaccinations or boosters and newly developing therapeutics, contribute to uncertainty around projections of prescription drug spending. 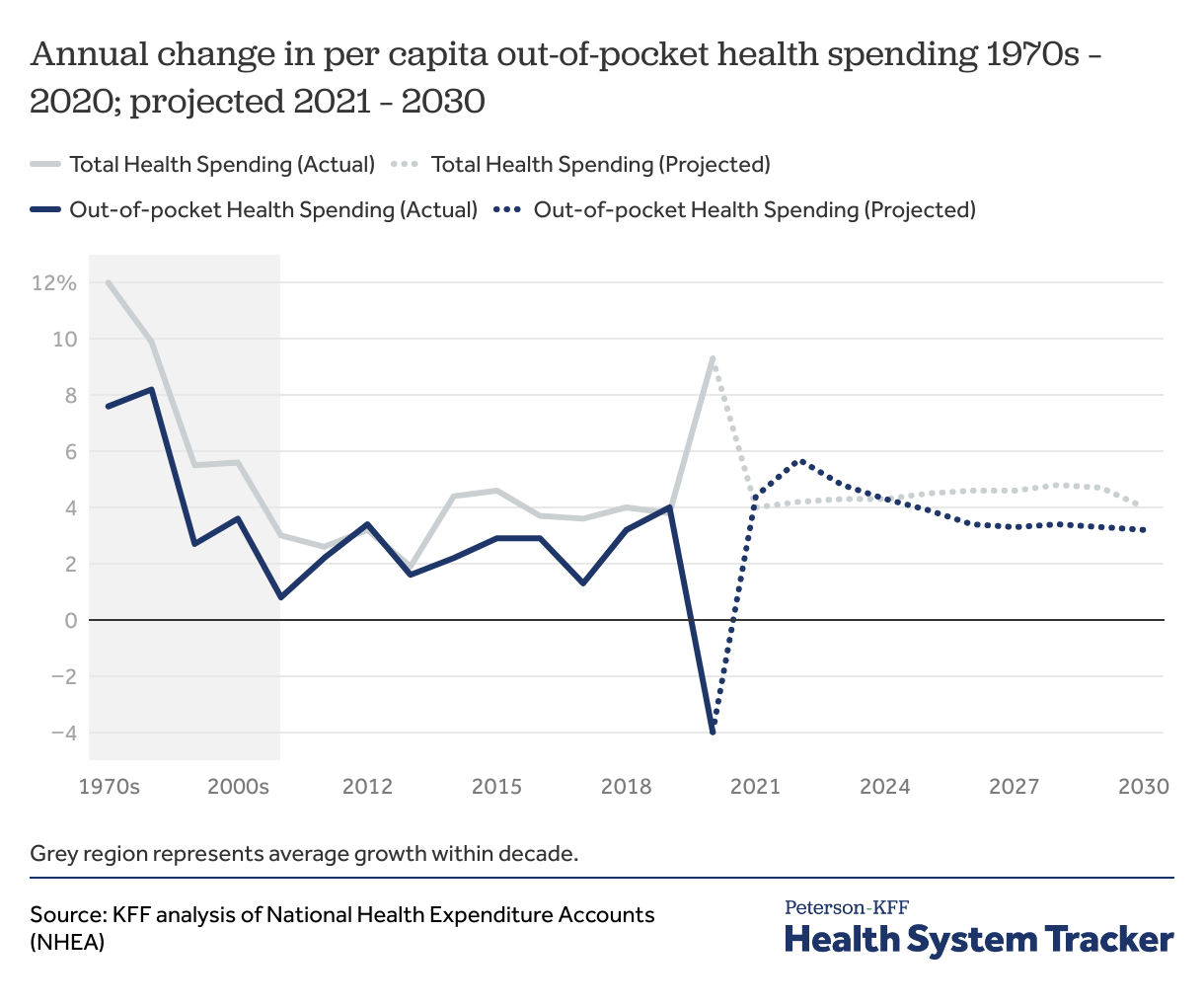 Out-of-pocket spending decreased 4.0% per capita in 2020 from the previous year, due in part to people delaying or going without routine care during the early stages of the pandemic. Additionally, although COVID-19 treatment can be very expensive, most insurers waived out-of-pocket costs for these hospitalizations for at least part of 2020. Other COVID-19 related services like testing (and eventually vaccination) were also generally available without cost-sharing. 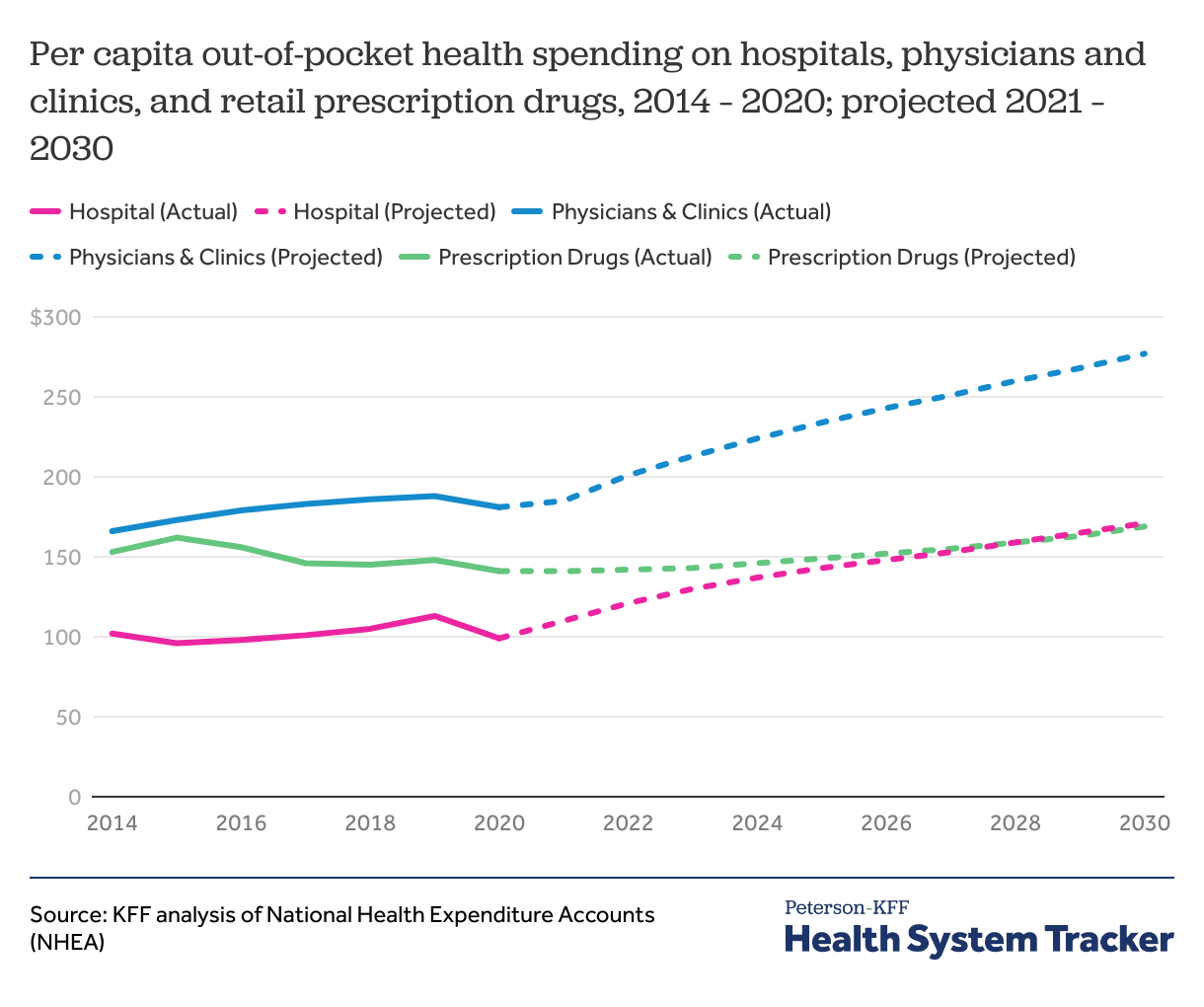 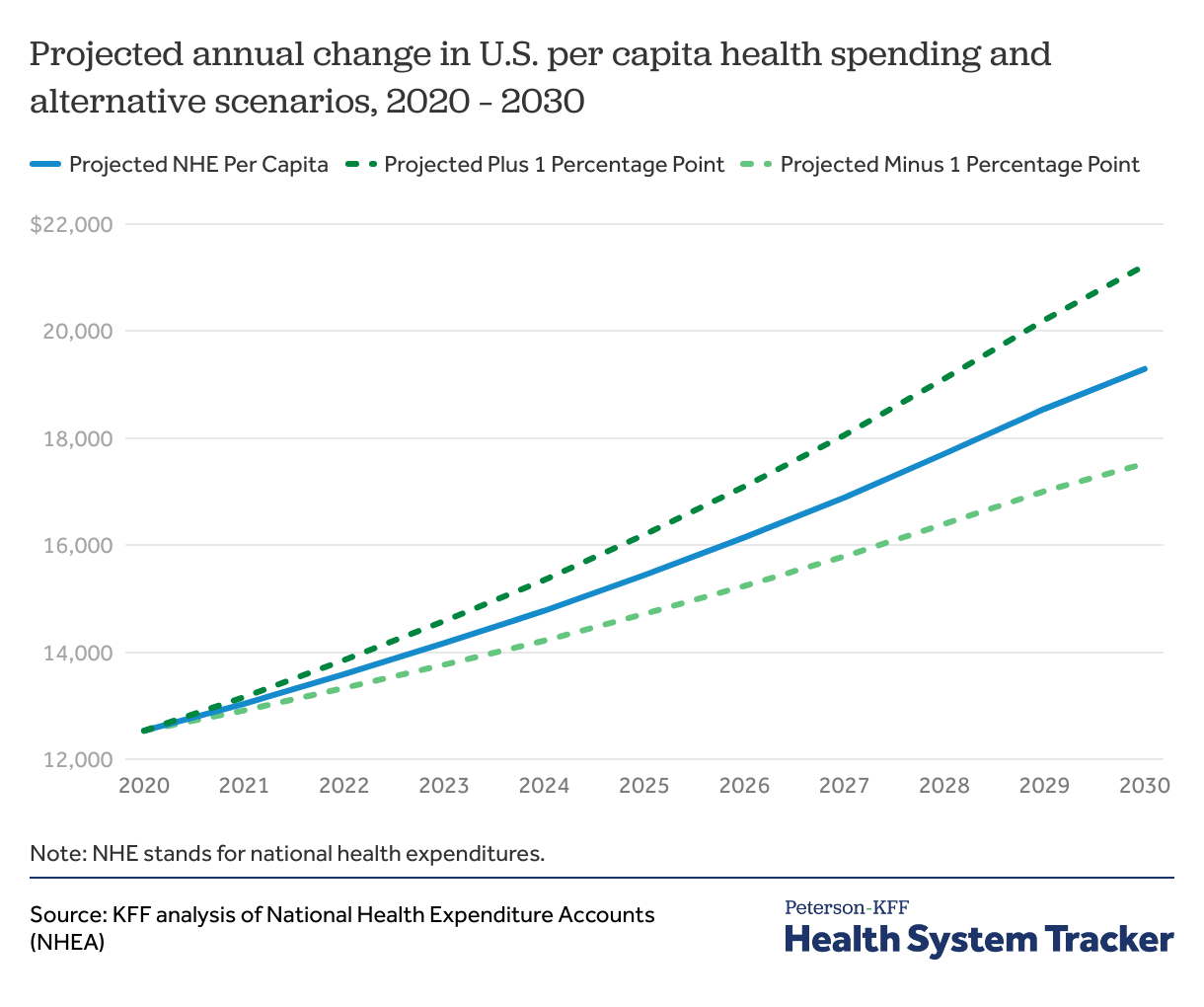 The COVID-19 pandemic makes projections of health spending even more difficult than in normal years, and even small differences in growth rates can add up to large spending differences over time. Volatile economic conditions, such as periods of inflation, can also impact the cost of health services. 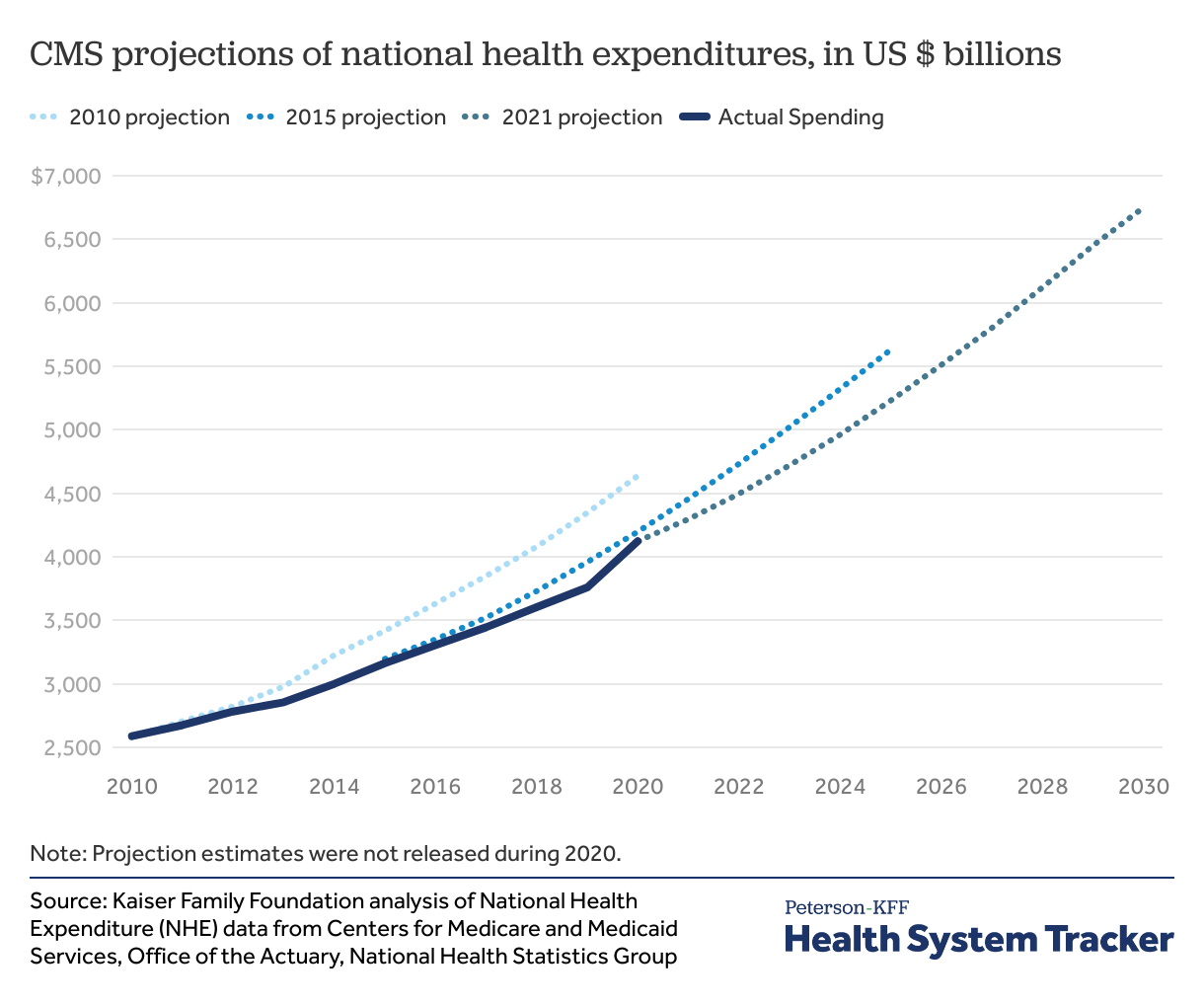