This chart collection explores recently released National Health Expenditure (NHE) data from the Centers for Medicare and Medicaid Services. These data offer insight into changes in health spending over time as well as the driving forces behind spending growth. 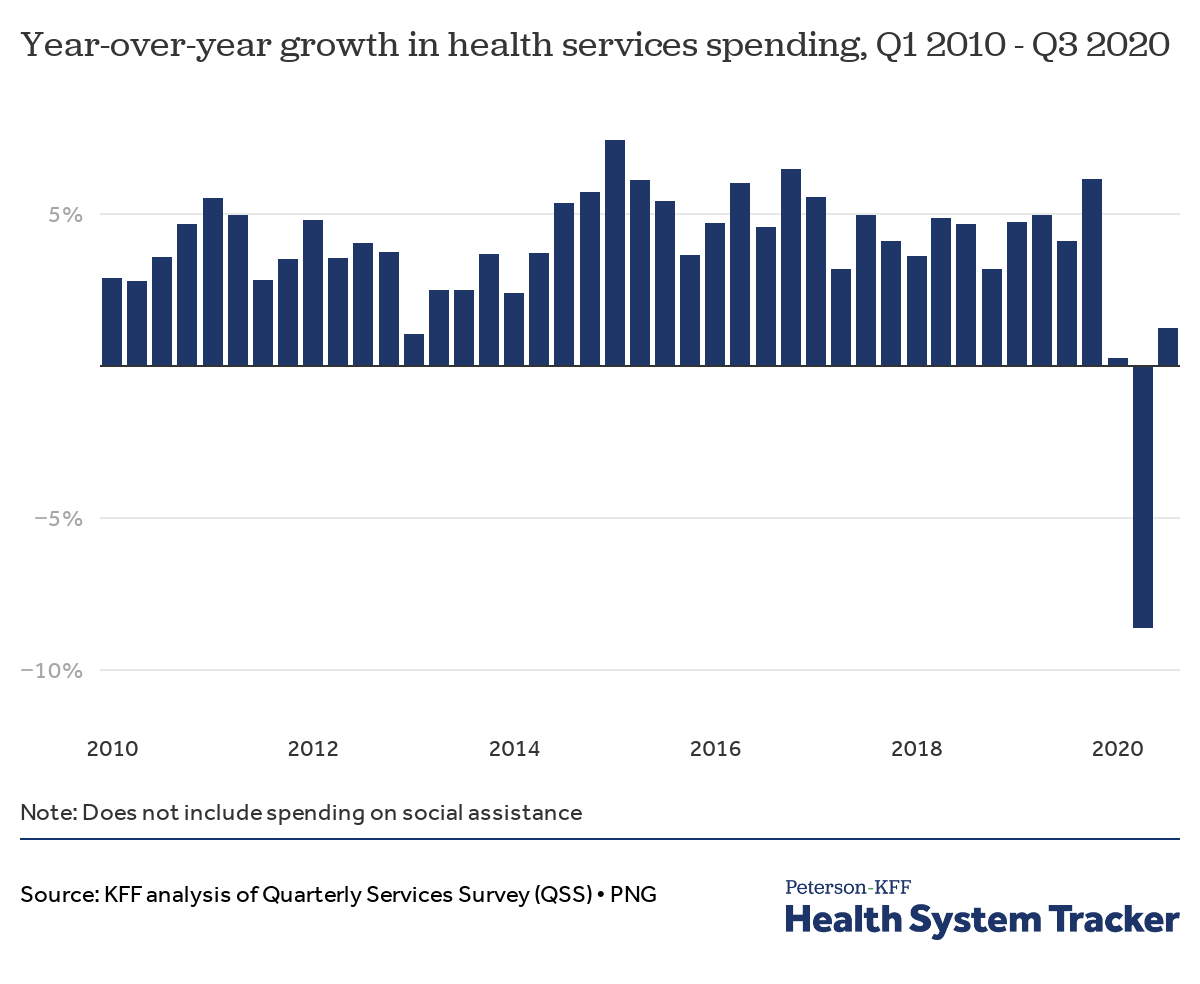 Before the pandemic, total health expenditures increased substantially over the past several decades 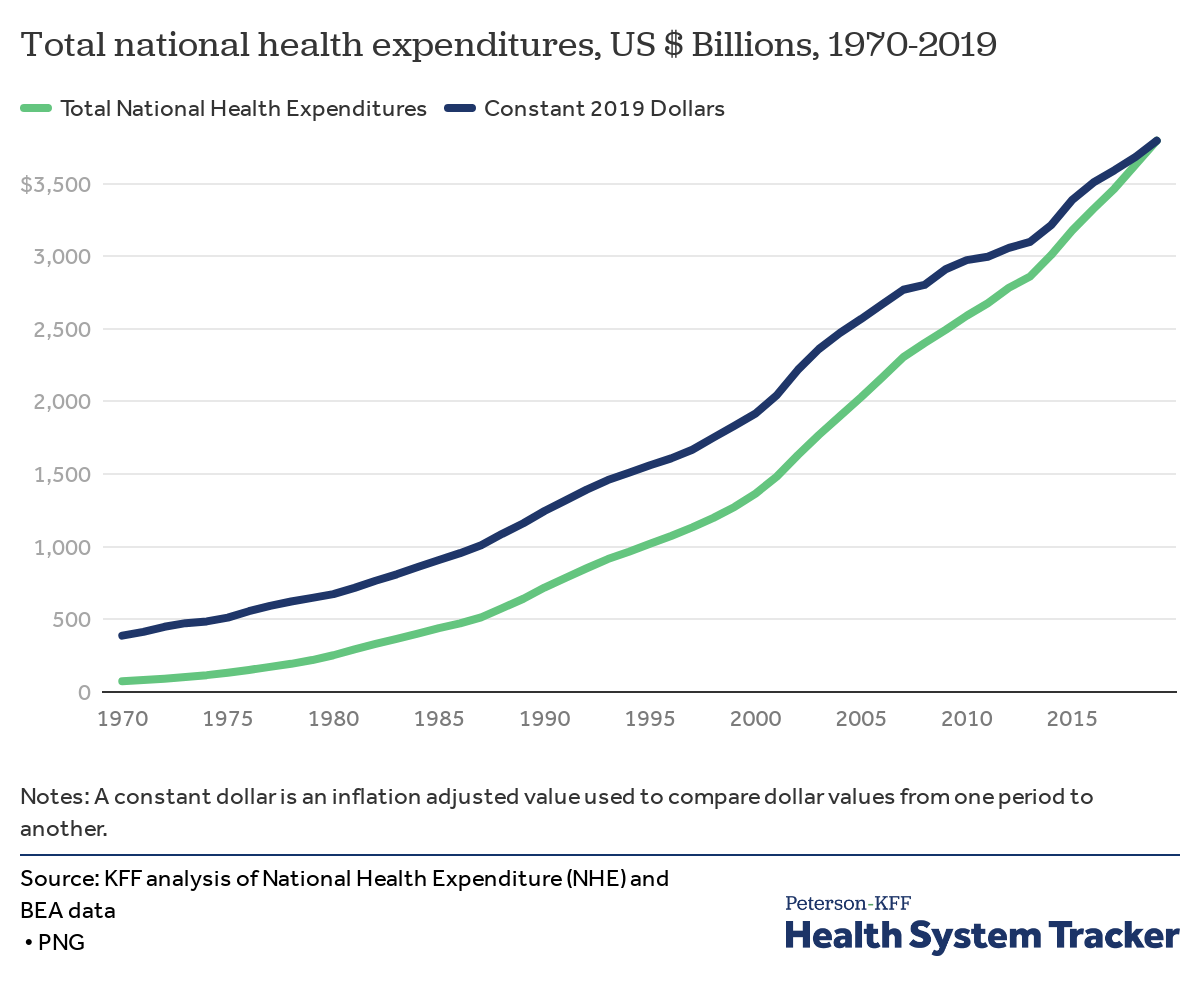 On a per capita basis, health spending has grown substantially 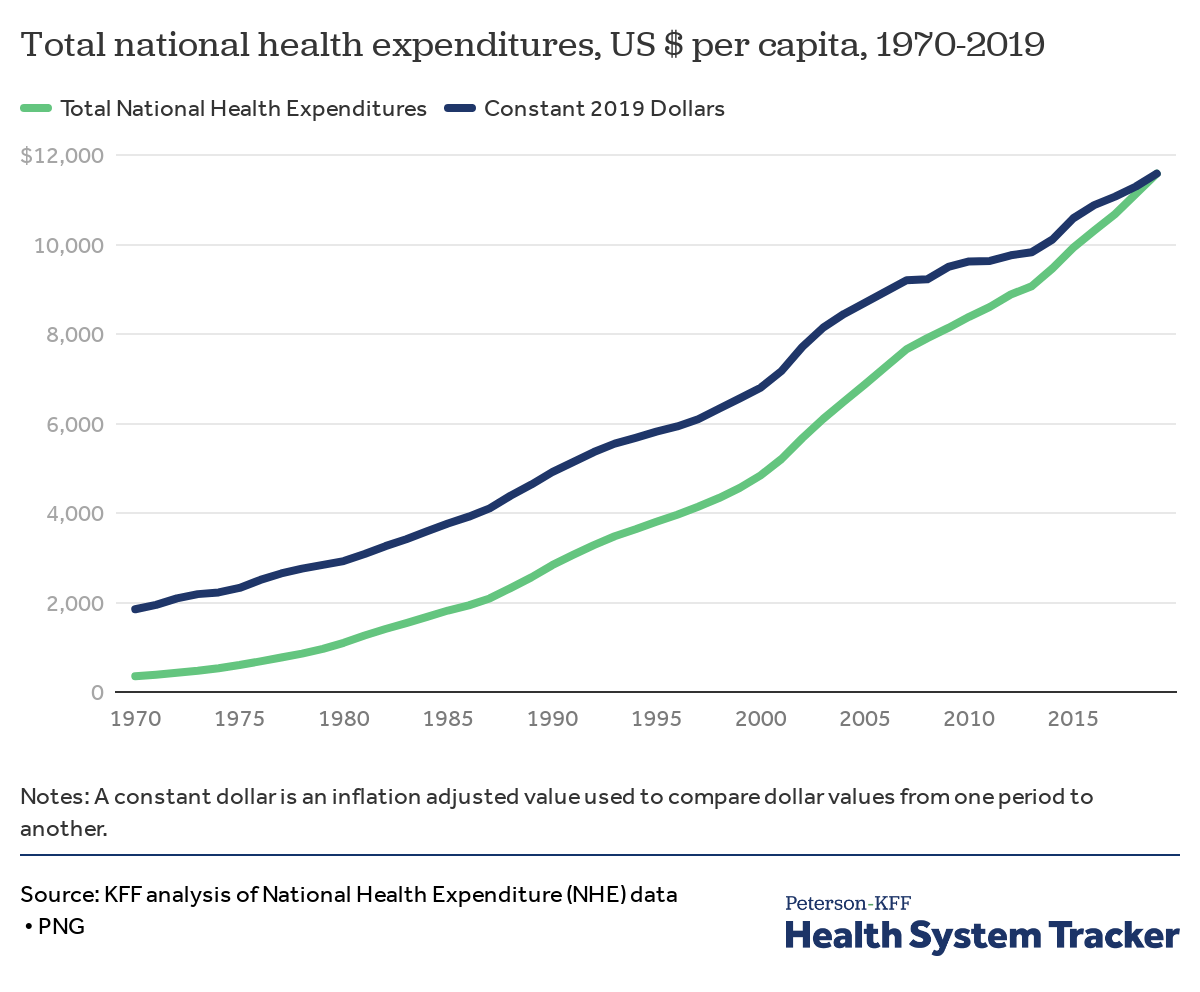 Health spending growth has outpaced growth of the U.S. economy 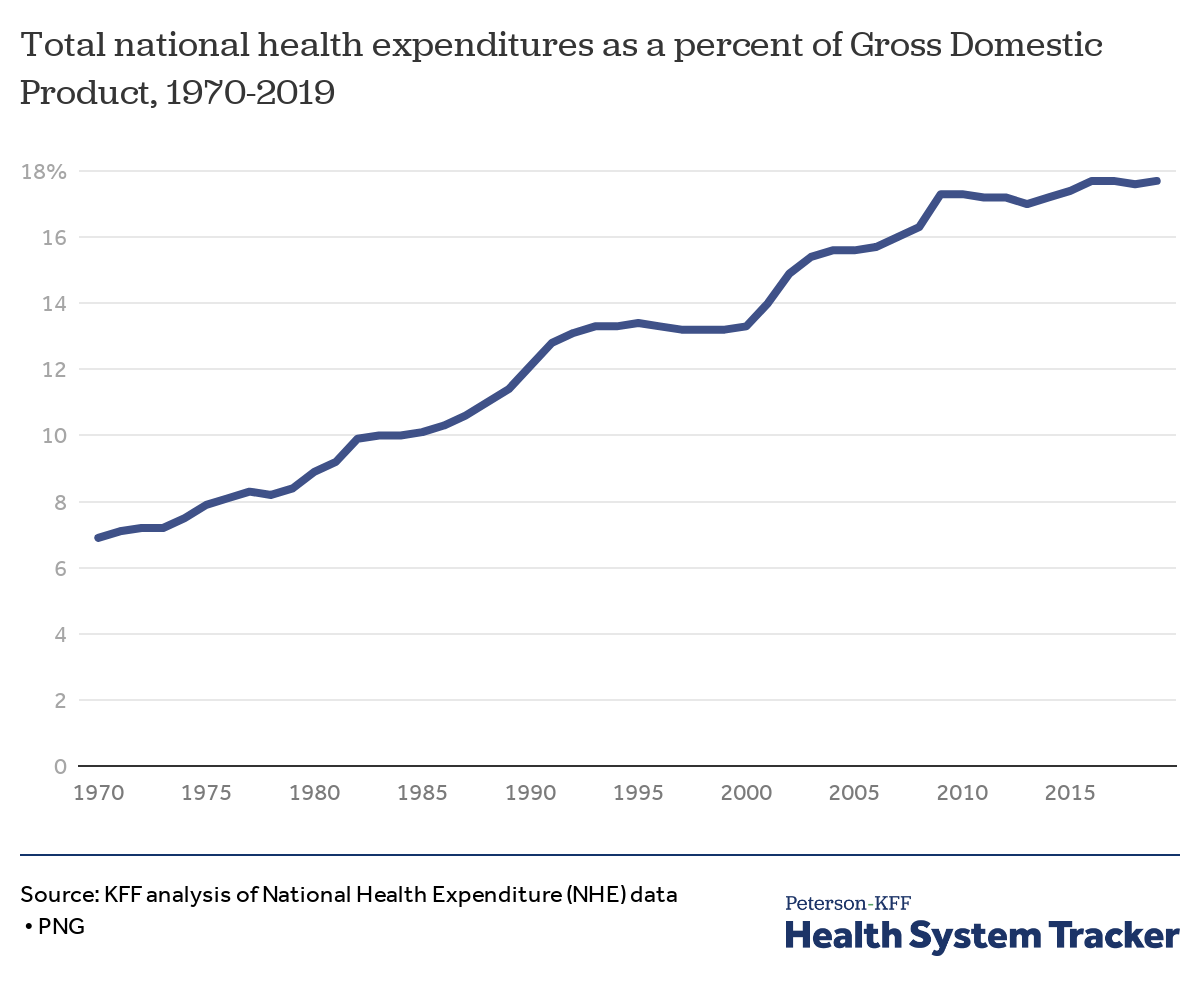 Another way to examine spending trends is to look at what share of the economy is devoted to health. In 1970, 6.9% of the gross domestic product (GDP) in the U.S. was spent toward total health spending (both through public and private funds). By 2019, the amount spent on healthcare has increased to 17.7% of the GDP. Health spending as a share of the economy often increases during economic downturns and remains relatively stable during expansionary periods. From 2016 through 2019, the share of GDP attributable to health spending decreased slightly from 17.9% to 17.7%. Although health services spending has decreased in the first three quarters of 2020 relative to the same period in 2019, GDP has decreased more in 2020 over 2019, and therefore, health spending may represent a larger portion of the economy in 2020 than in prior years.

Health spending growth has slowed, and is now more on pace with economic growth 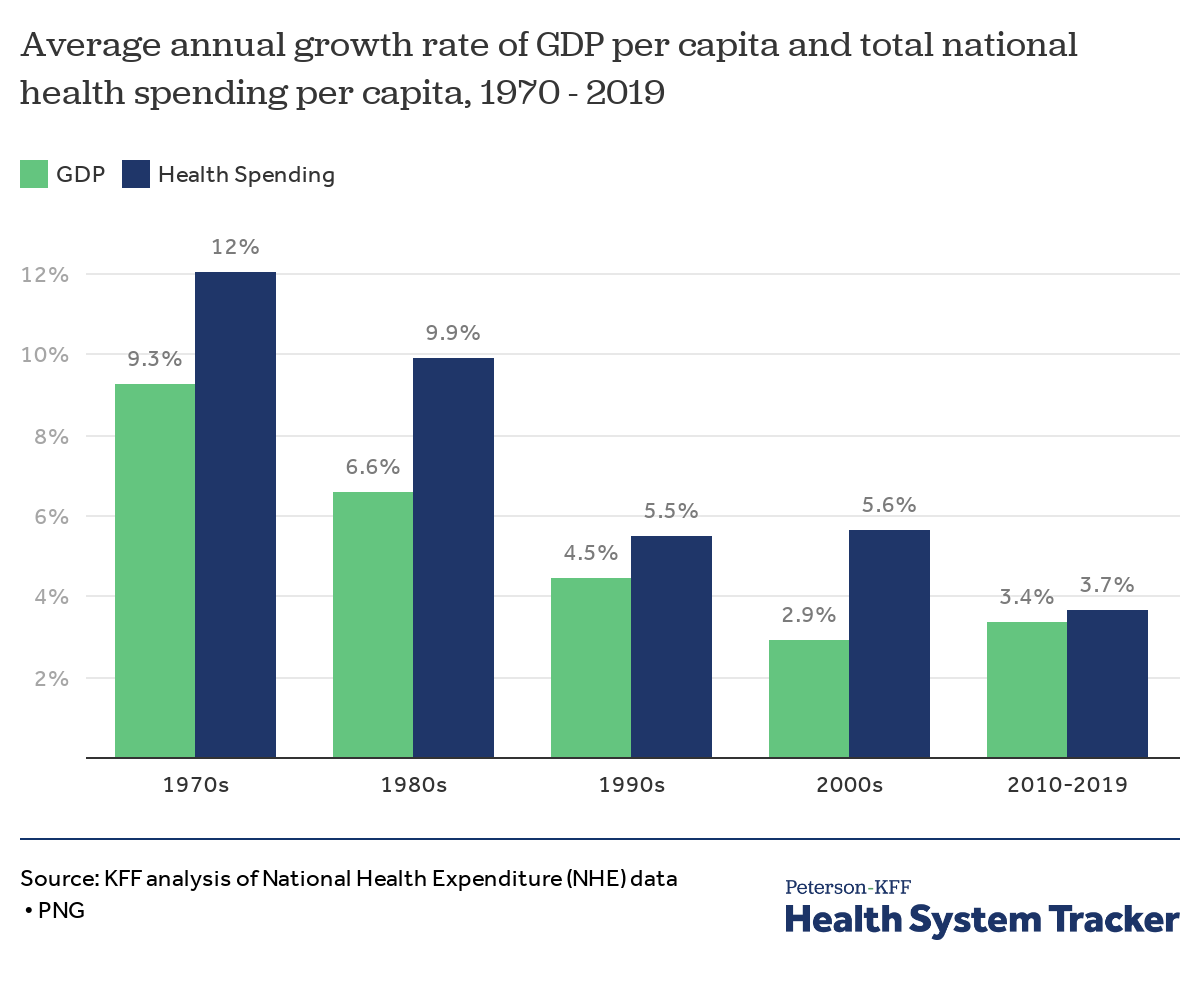 From 1970 through 1980, the average annual growth in the U.S. economy was 9.3% per year, compared to health spending growth of 12%. Although health spending growth has since moderated, it generally continued to outpace growth of the economy, though by somewhat smaller margins in recent years. The periods from 2010 through 2013, and 2016 through 2018, however, saw an average annual growth rate in health expenditures similar to growth in GDP. Health spending did pick back up in 2014 and 2015 with the coverage expansions of the Affordable Care Act and growth has been stable in the years since.

In recent years, spending on hospitals, physicians, and prescriptions has slowed to a similar pace 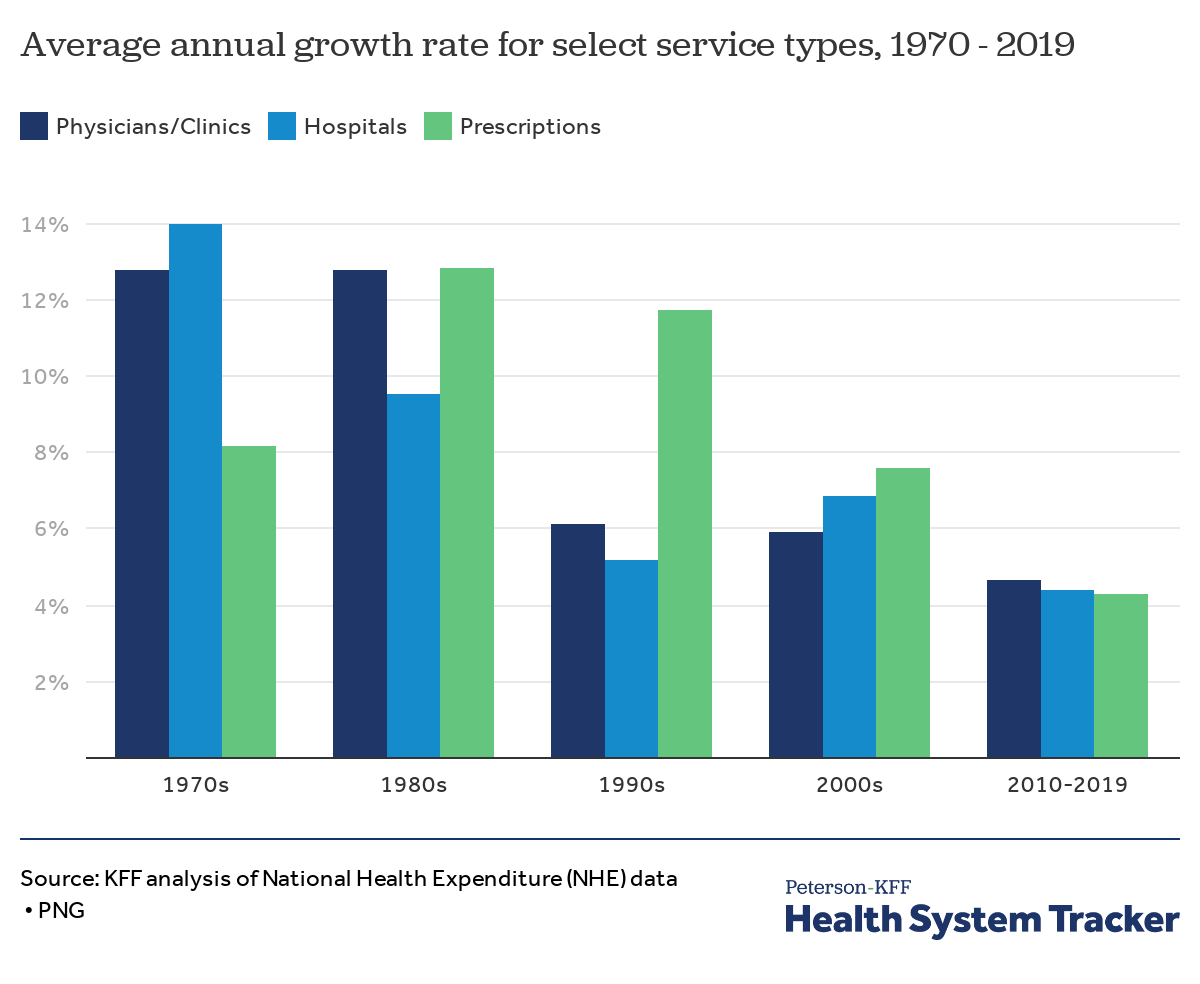 Hospital and physician services represent half of total health spending 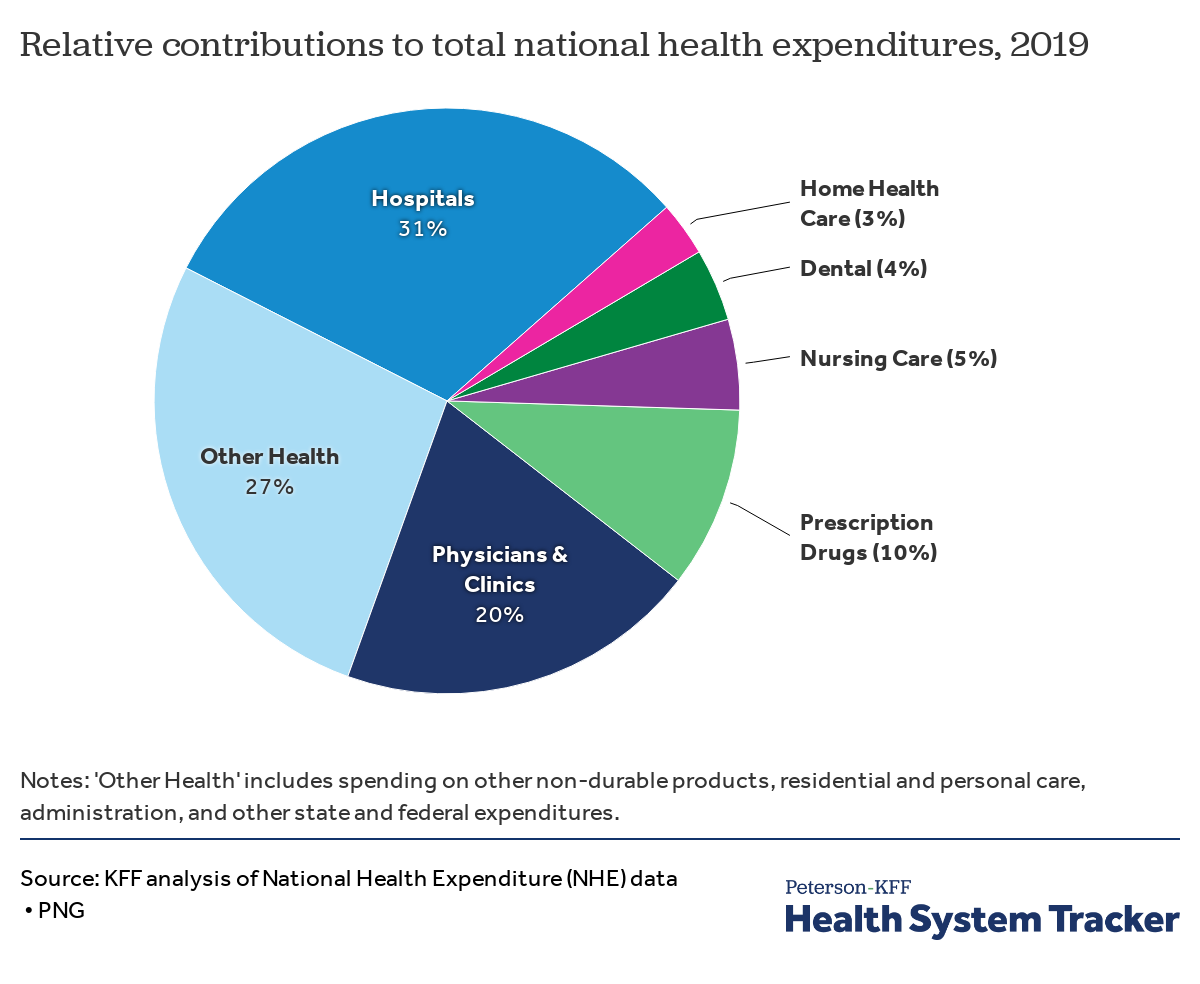 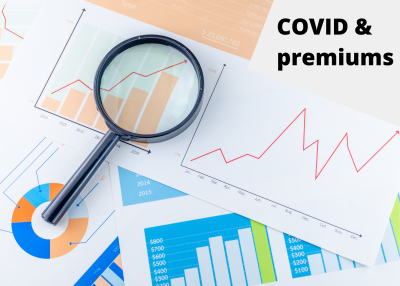 Per capita out-of-pocket expenditures have grown since 1970 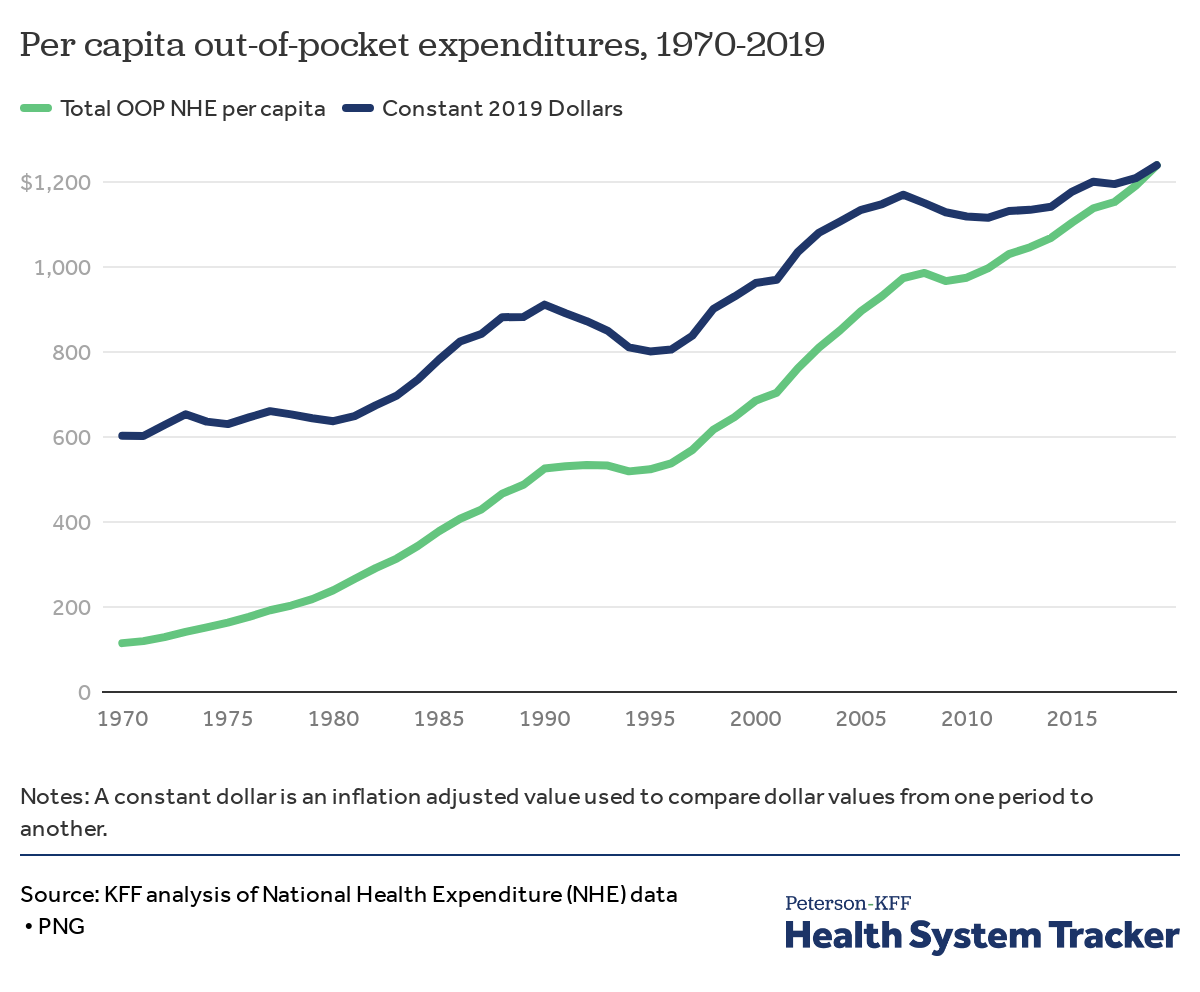 In dollar terms, out-of-pocket expenditures have grown steadily since 1970, averaging $1,240 per capita in 2019, up from $115 per capita in 1970 ($603 in 2019 dollars). Out-of-pocket medical costs do not include the amount individuals contribute toward health insurance premiums. 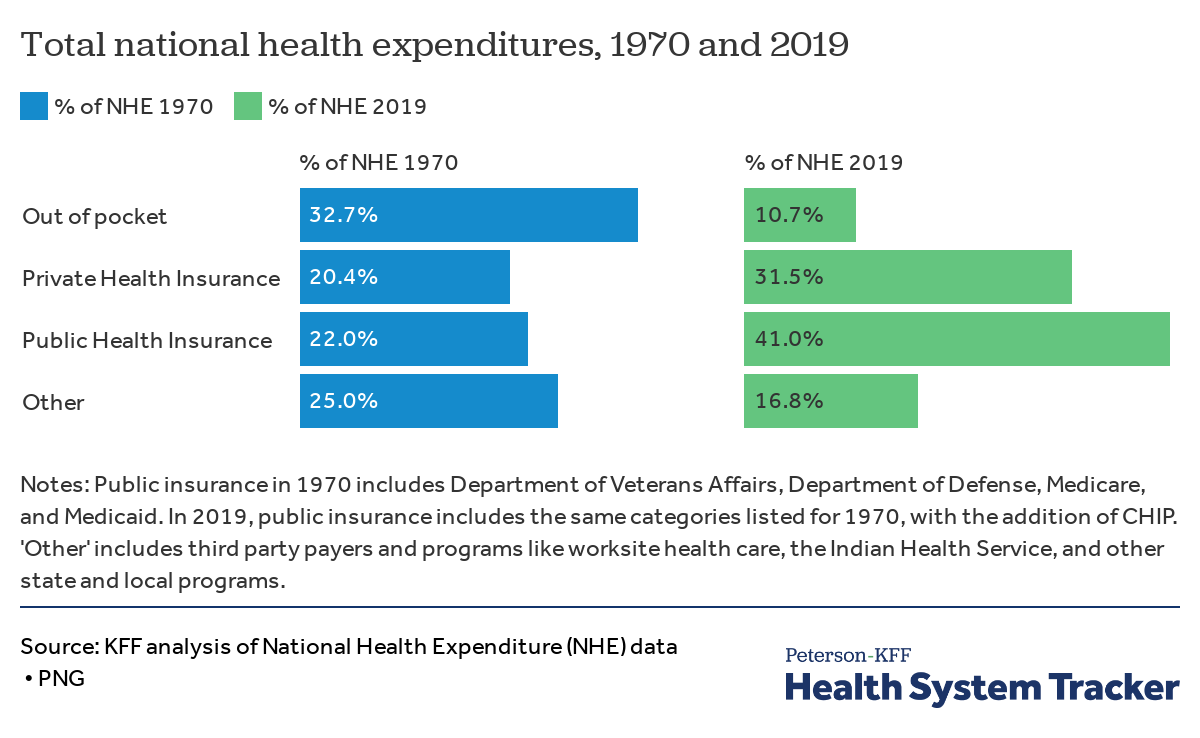 On a per enrollee basis, private insurance spending has grown much faster than Medicare and Medicaid spending 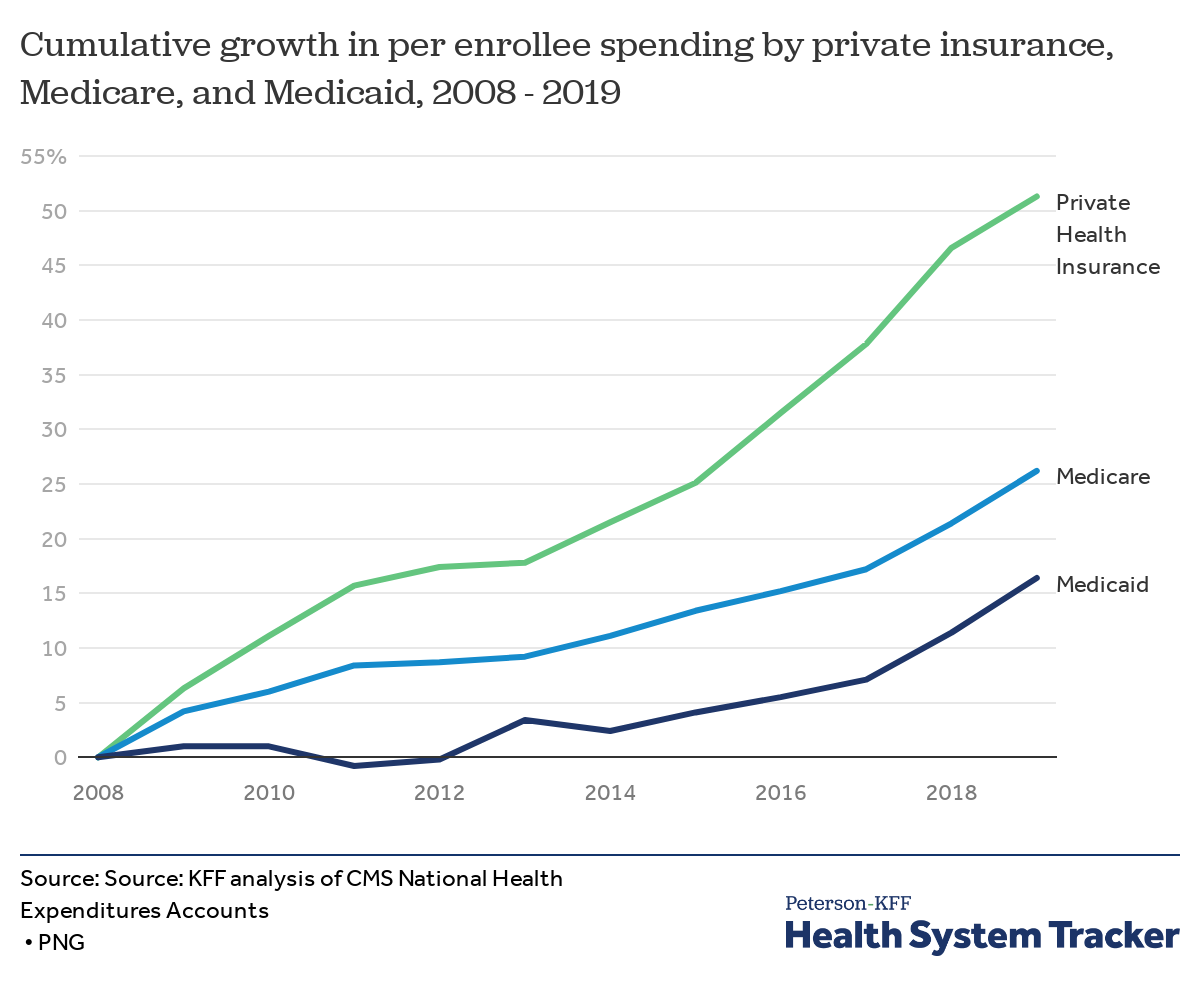 Per enrollee spending growth has slowed recently for all major payers 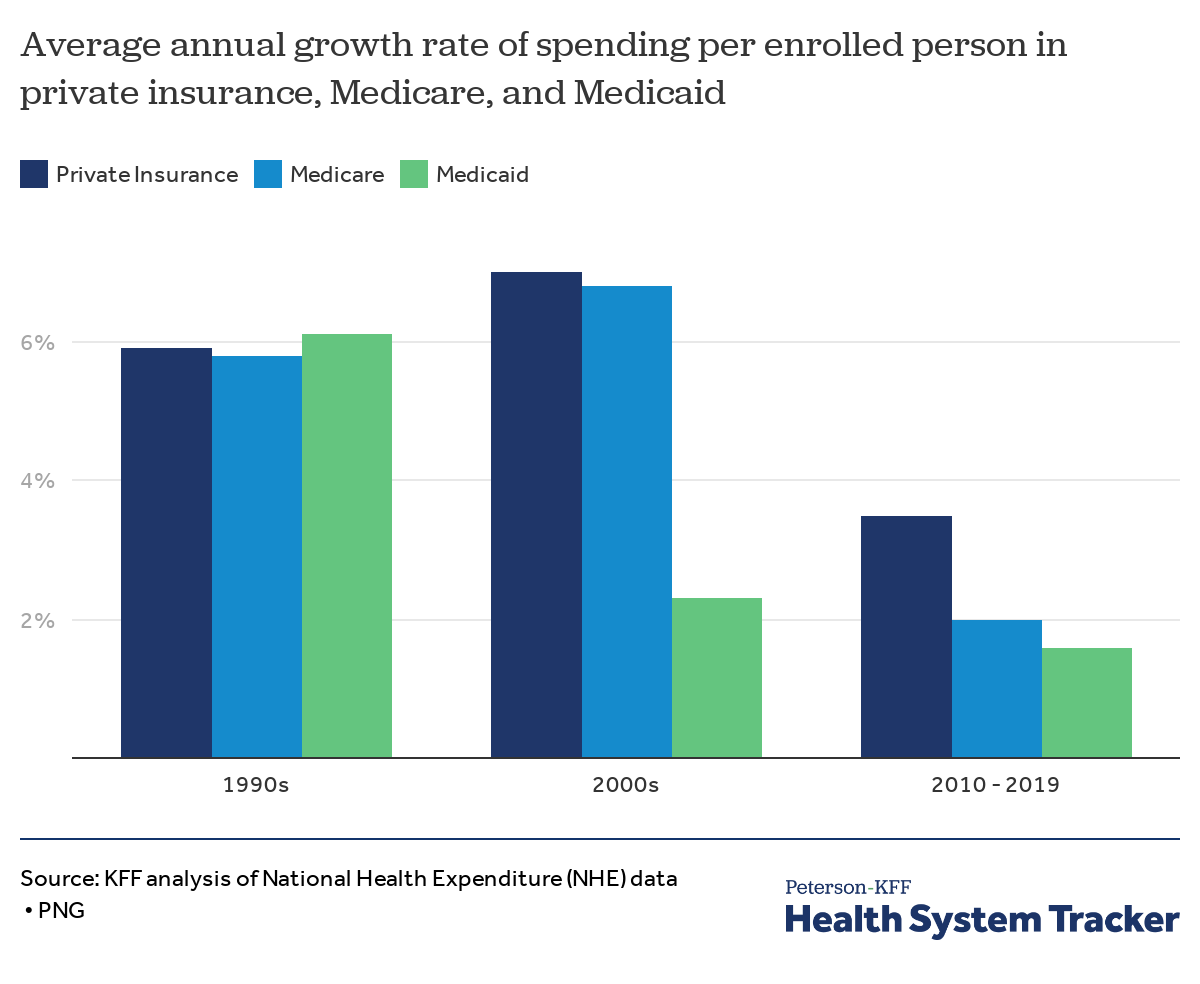 Public and private health spending have both grown substantially, but public spending has grown faster 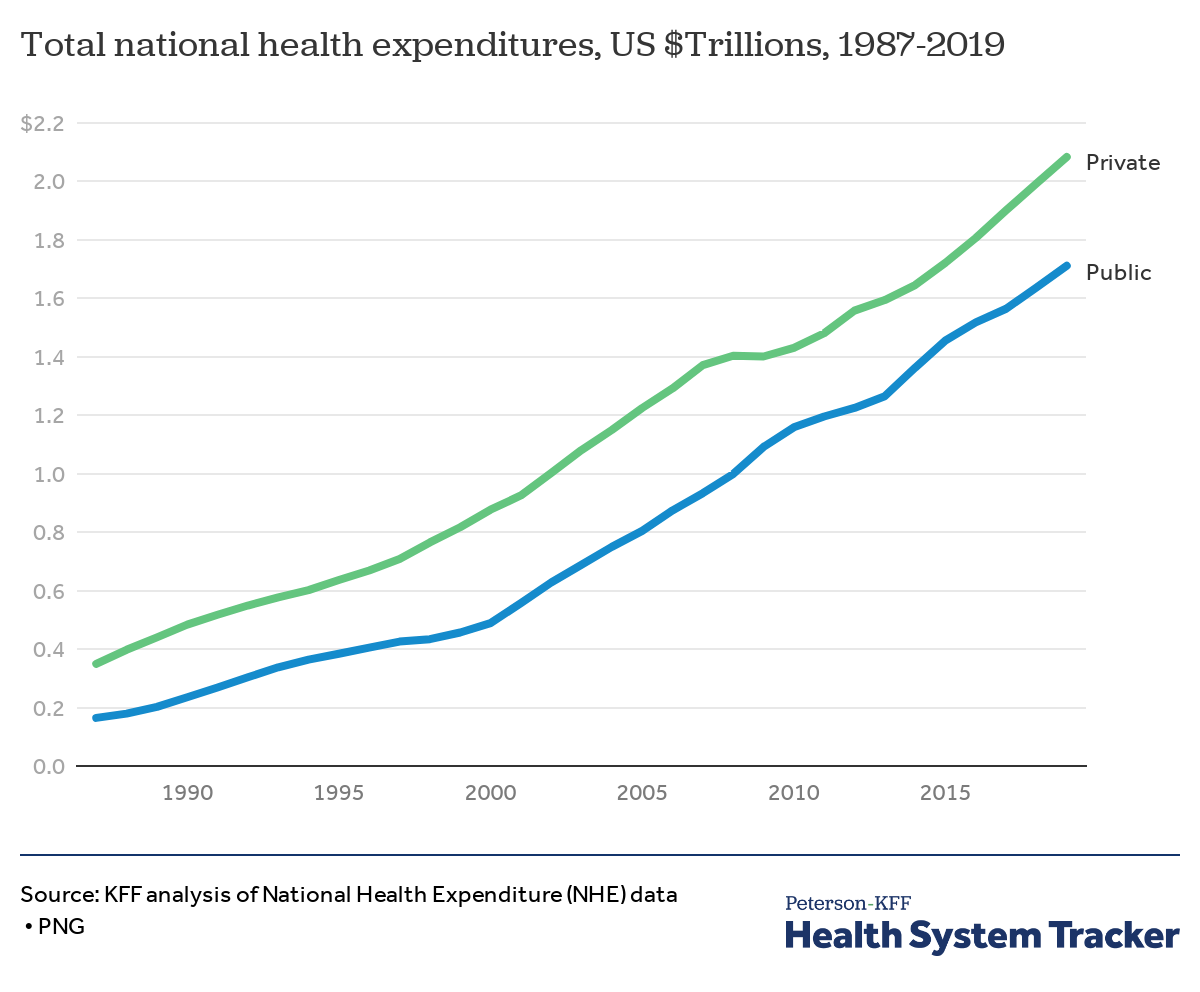 Administrative costs have risen modestly in the last decade, but dropped in 2019 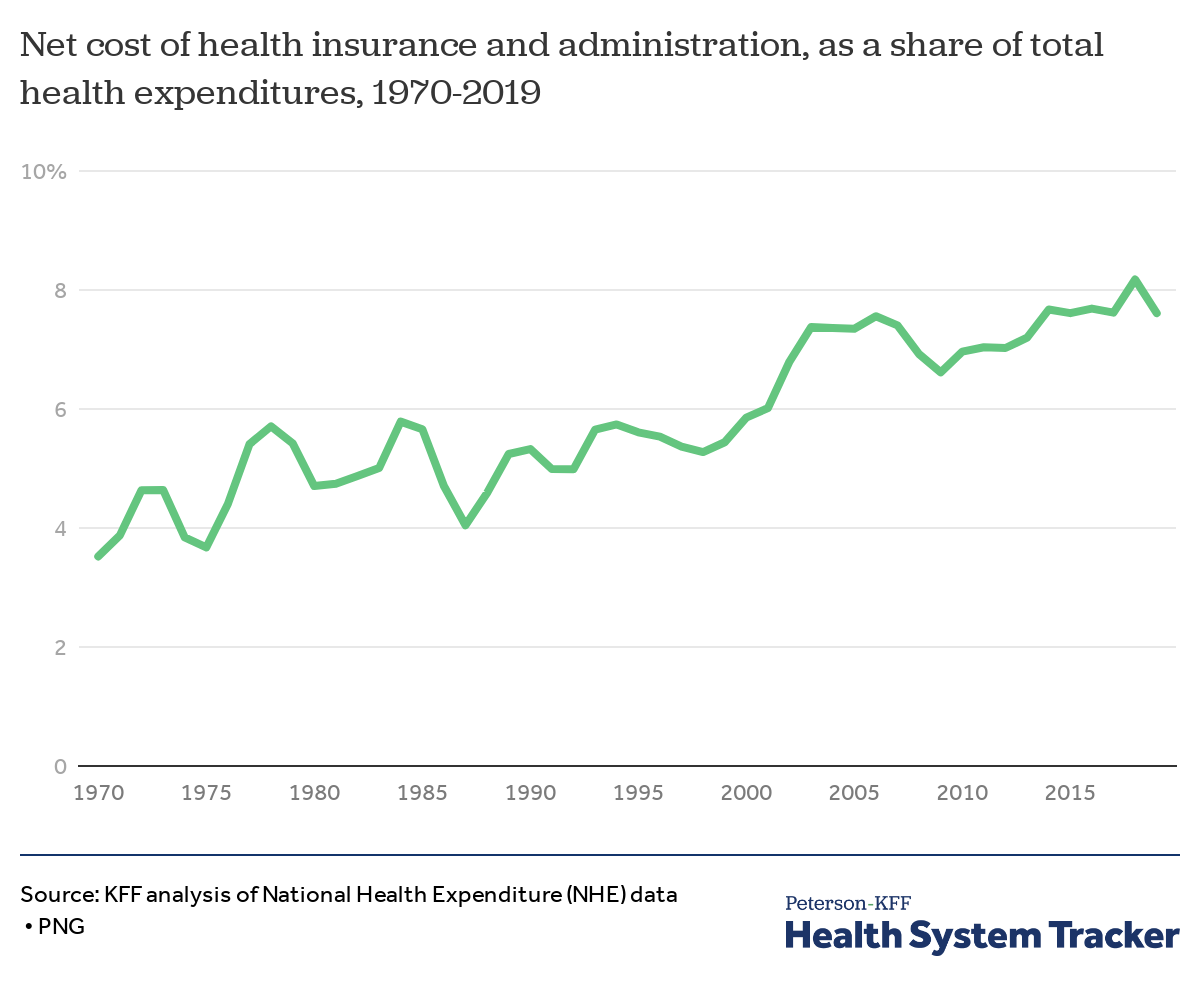 Spending on public health has increased, particularly by state and local governments 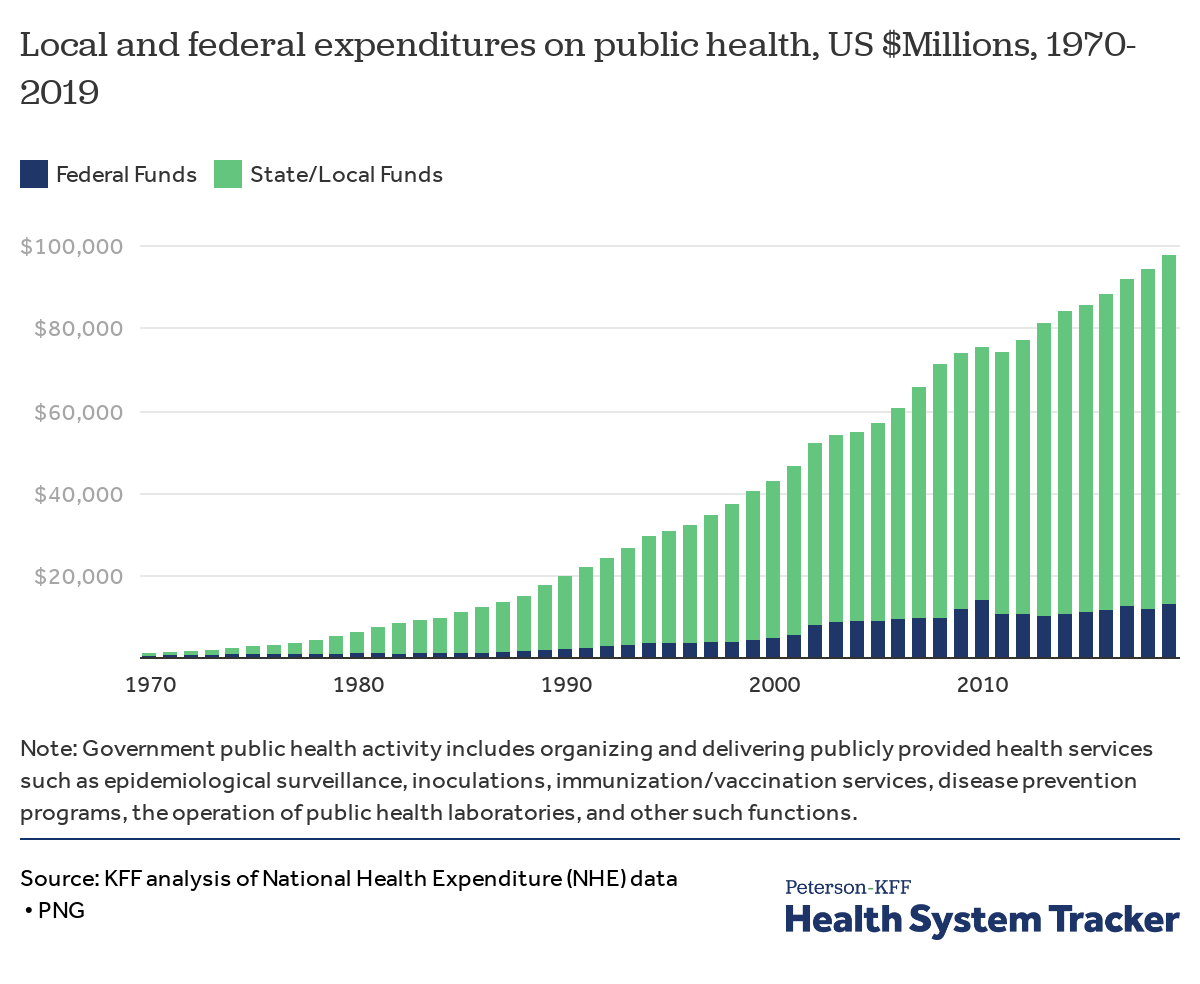 Spending on public health has grown since the 1970s, and the majority of this growth is from state and local governments. Public health spending had been relatively flat in the years immediately following the Great Recession, but has picked up in recent years. 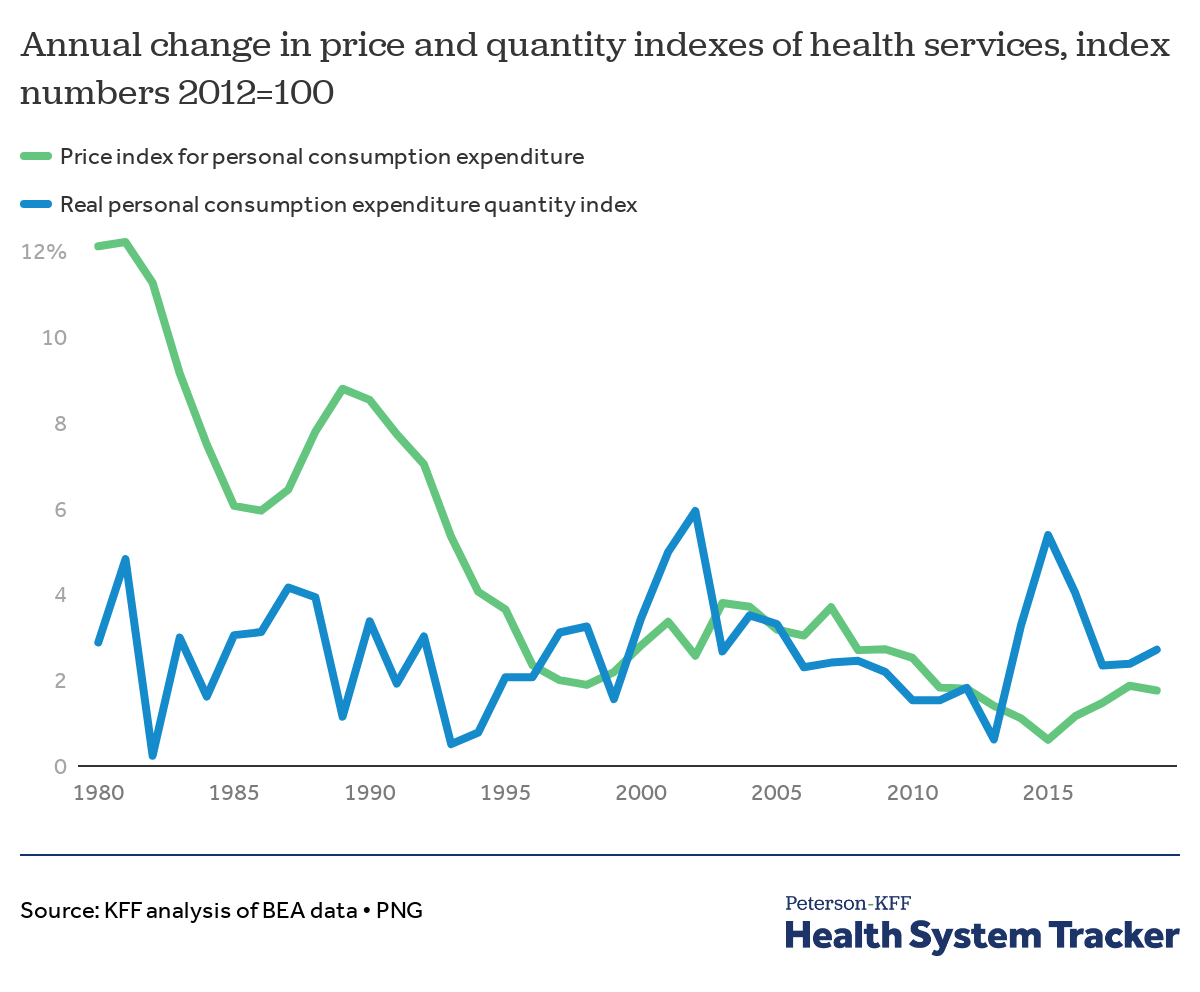 Health services spending is generally a function of prices (e.g., the dollar amount charged for a hospital stay) and utilization (e.g., the number of hospital stays). For most of the 1980s and 1990s, healthcare price growth in the U.S. outpaced growth in utilization of healthcare. In recent years, utilization – likely driven by coverage gains under the Affordable Care Act – has grown quicker than prices. 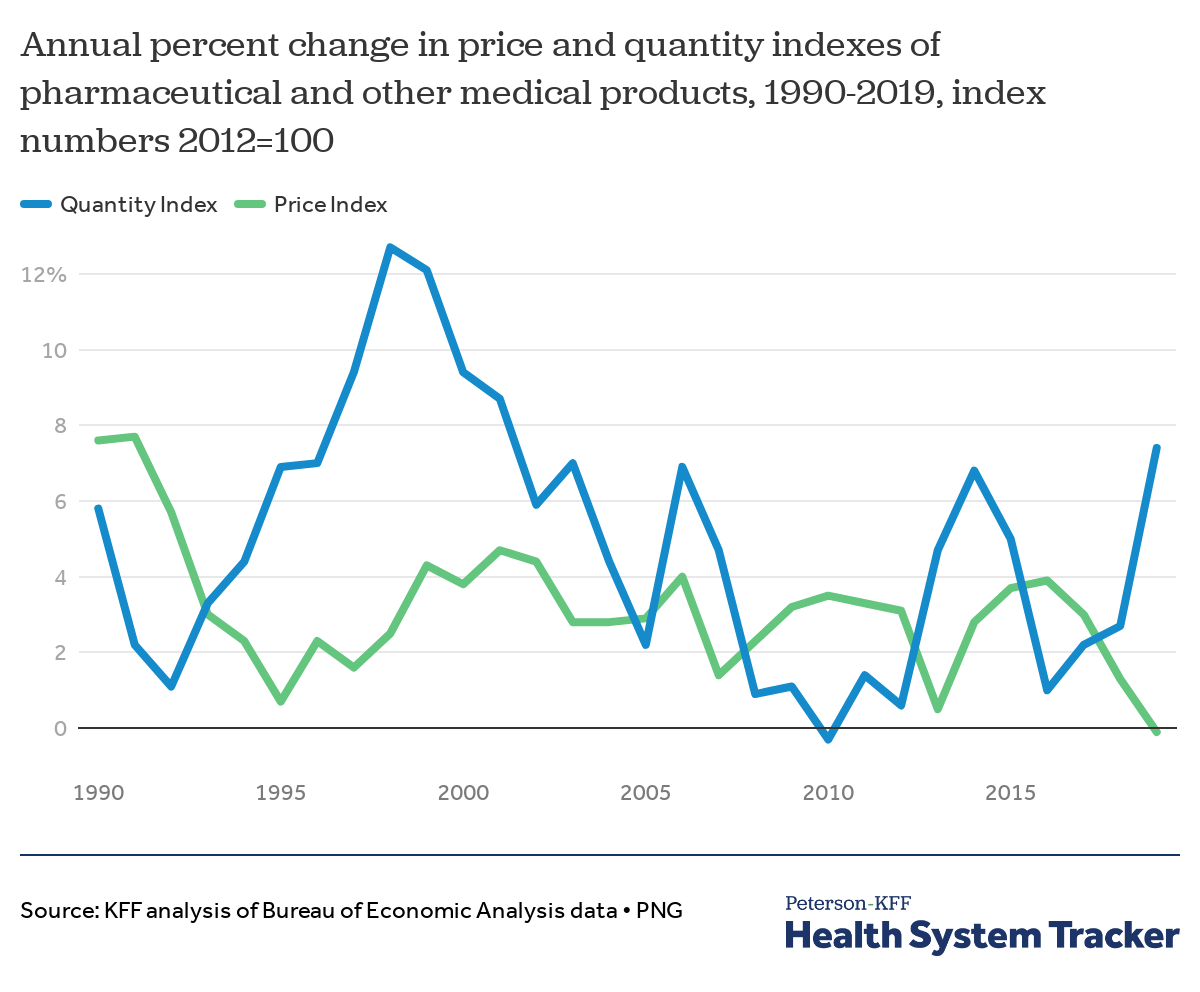 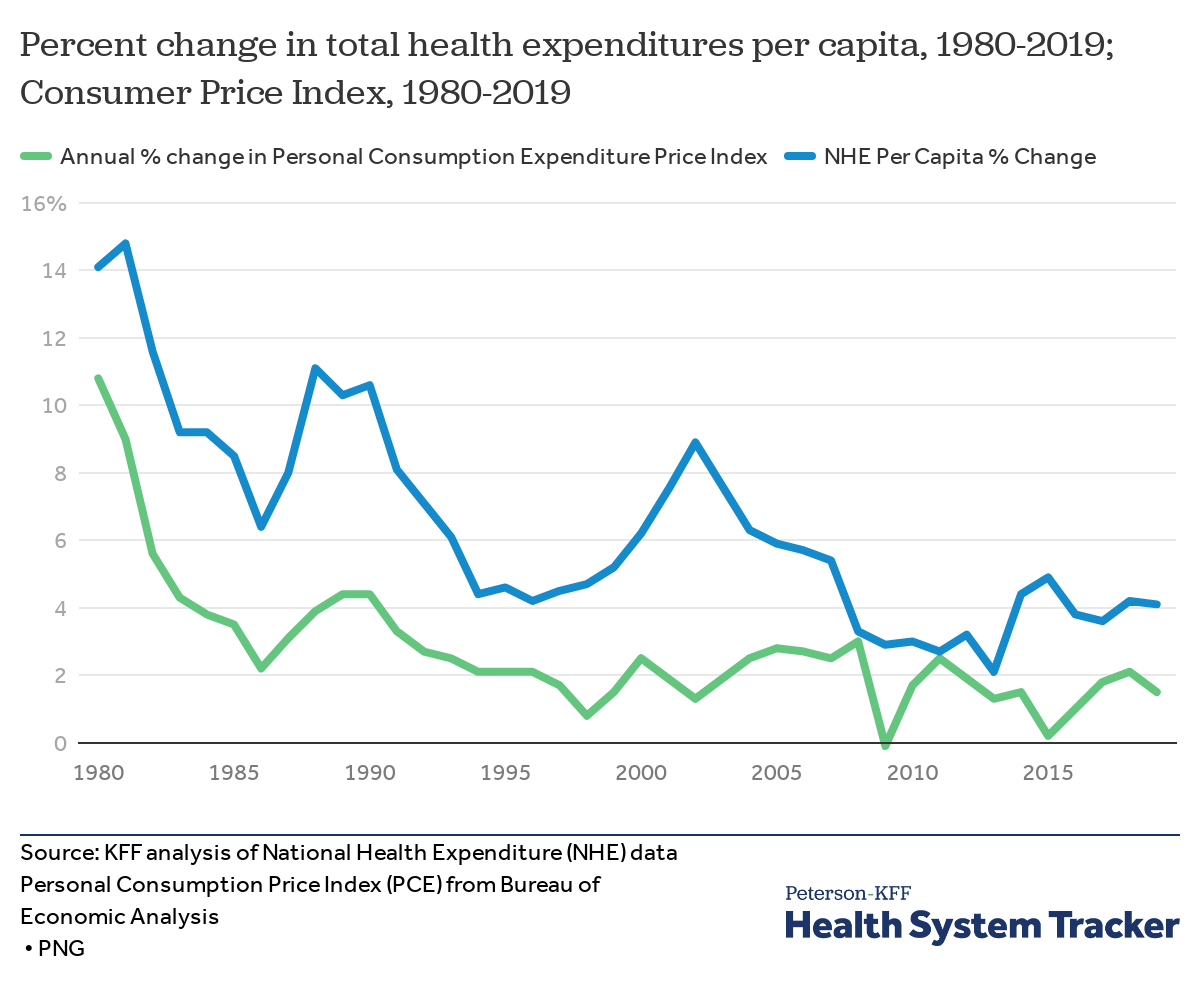 From 1980 to 2008, per capital national health expenditures grew faster than the Personal Consumption Expenditure Price Index (inflation). Starting in 2008, health spending growth slowed to a similar rate as inflation and remained relatively stable at about 3 percent growth per year. In 2014 and 2015, health spending began to grow more rapidly with the Affordable Care Act’s coverage expansion, but slowed once again in 2016 and 2017. Per capita health spending slowed slightly from 2018 to 2019, declining 0.1%. 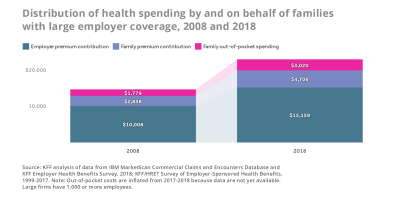 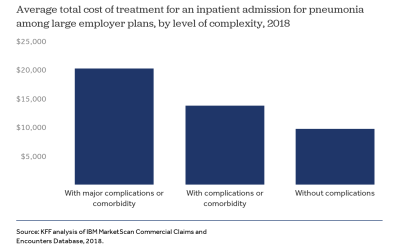