Health plans use cost-sharing (deductibles, copayments, and coinsurance) as incentives for enrollees to use services efficiently and to shop for lower cost options when they do need care. Cost-sharing that is too high, however, can discourage enrollees from getting the care that they need or drive them into financial distress and even bankruptcy. Enrollees in private health insurance plans may have to pay thousands of dollars to meet plan deductibles, coinsurance and copayments. Cost-sharing in private health insurance plans has steadily increased over time. For employer-based coverage in 2021, the average deductibles for single coverage were $2,379 for covered workers at small firms and $1,397 for covered workers in larger firms. Similarly, deductibles in non-group Marketplace plans can be much higher for enrollees not eligible for cost-sharing reductions.

How much do households have in assets?

Liquid financial assets are those that are most easily converted to cash, including checking and saving accounts, money market accounts, certificates of deposit, savings bonds, non-retirement mutual funds, stocks and bonds. It excludes the value of dedicated retirement accounts (such as 401k accounts) and the cash value of life insurance. We think of this as the money that a household could bring to bear in a short period. 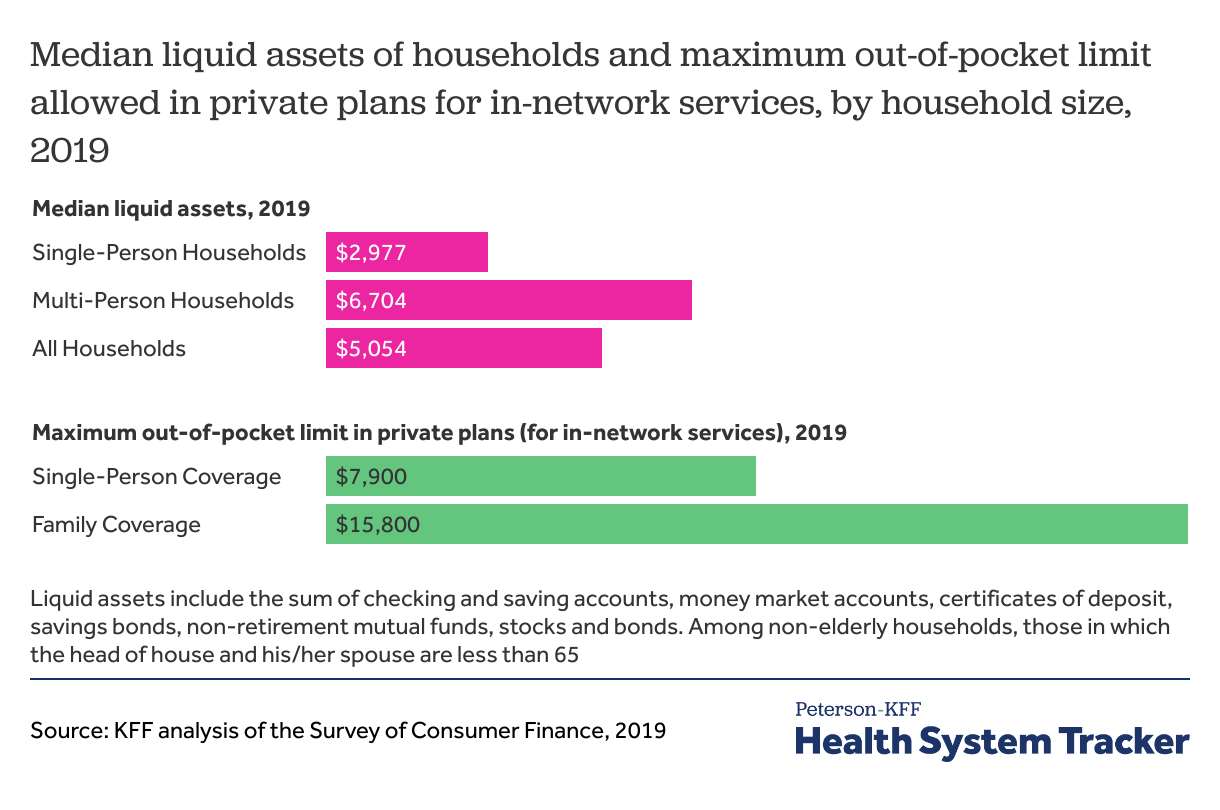 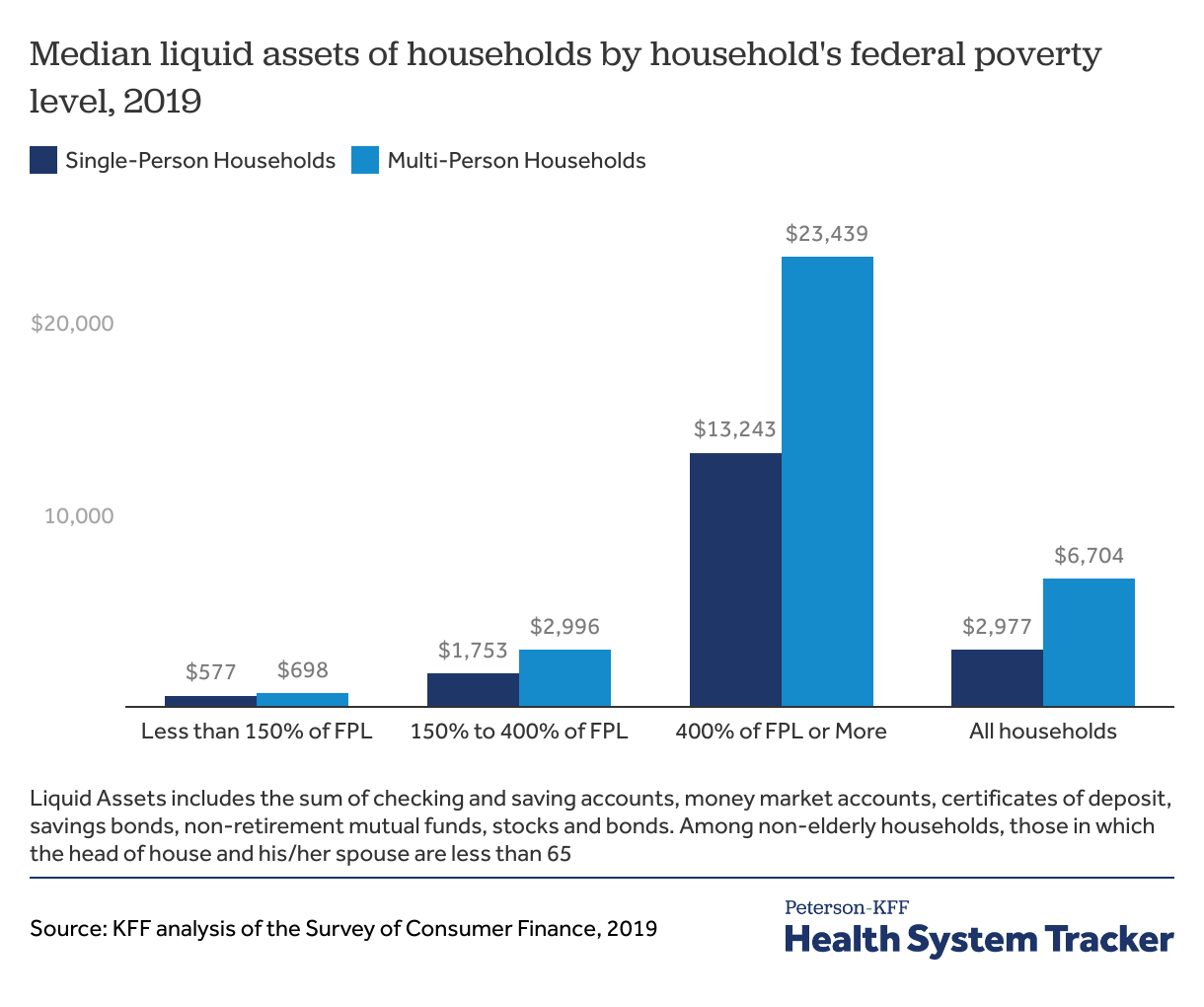 How many households can afford typical cost-sharing amounts? 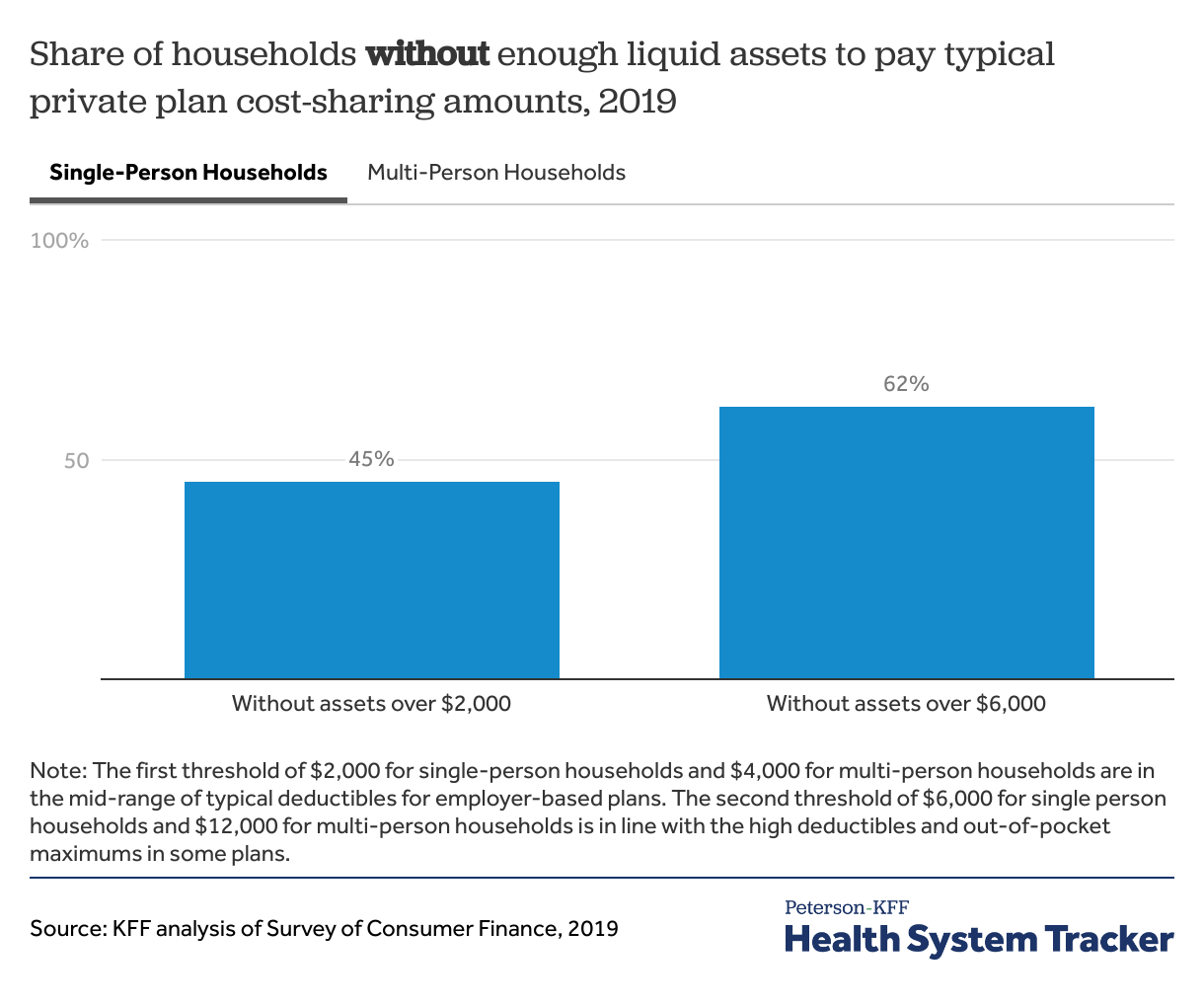 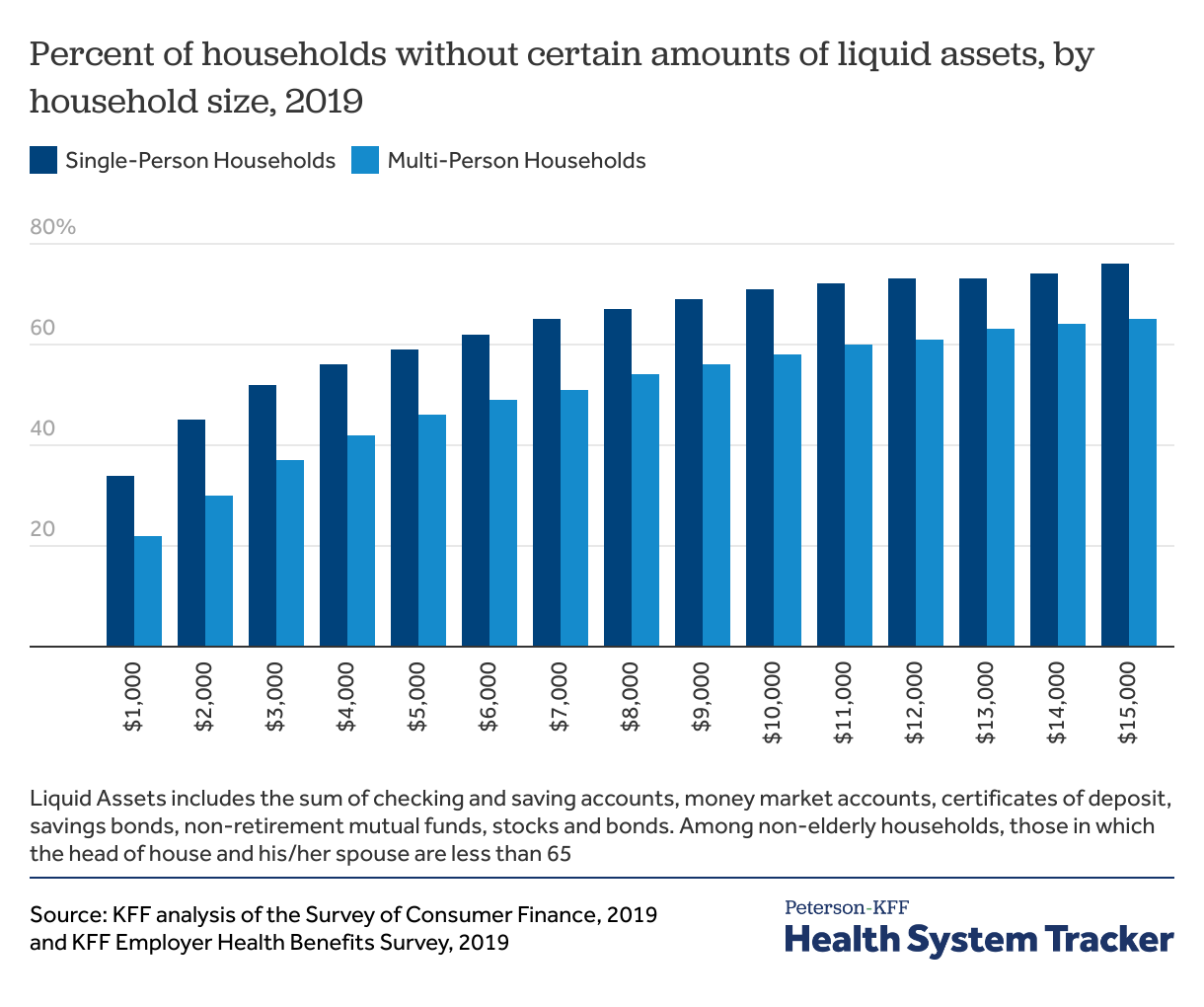 Most households do not have enough liquid assets to meet the typical out-of-pocket maximum. In a given year, most people are relatively healthy and would not need to pay these expenses, but a serious illness or accident could potentially expose people to high costs.

How does affordability of cost-sharing vary by income?

Lower-income people are less able to afford costly medical care. Among non-elderly people living on their own with incomes below 150% of poverty, 72% could not pay $2,000 from their liquid assets for cost sharing, compared with 54% of those between 150% and 400% of poverty and only 16% of those above 400% of poverty or more.

Low-wage individuals may have reduced cost-sharing if they are covered through Medicaid or a Marketplace plan, but many are ineligible for these programs. Low-wage workers enrolled in employer plans may struggle to meet plan cost-sharing requirements. Approximately 84% of multi-person households with incomes below 150% of the FPL do not have $4,000 in liquid assets, in addition to 16% of households with incomes above 400% of the FPL and 57% of households in between. While households with higher incomes are more likely to have savings, many still do not have enough to meet typical cost-sharing level, evidenced by the fact that approximately one-in-six multi-person households earning above 400% of poverty have less than $4,000 in liquid assets. 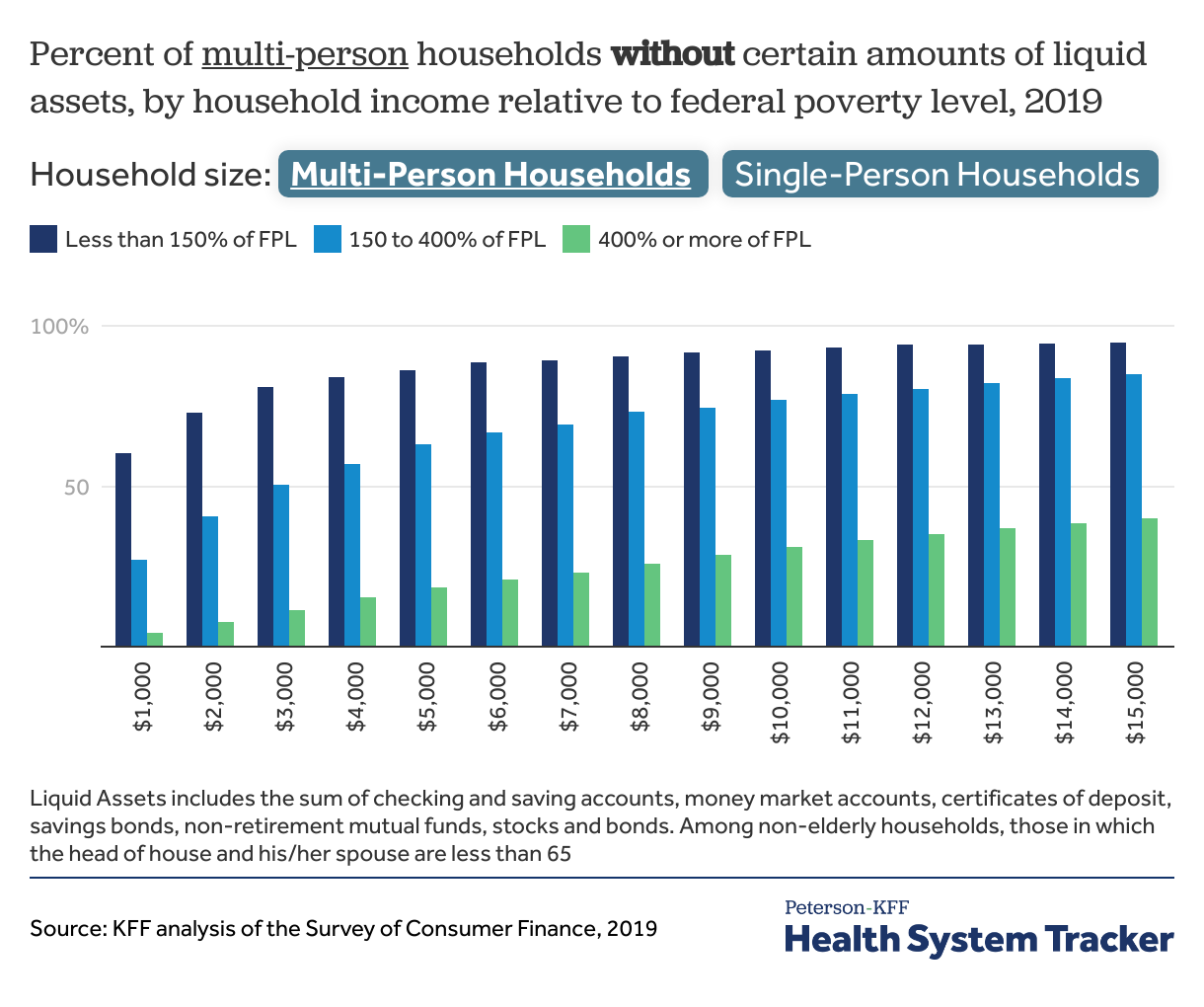 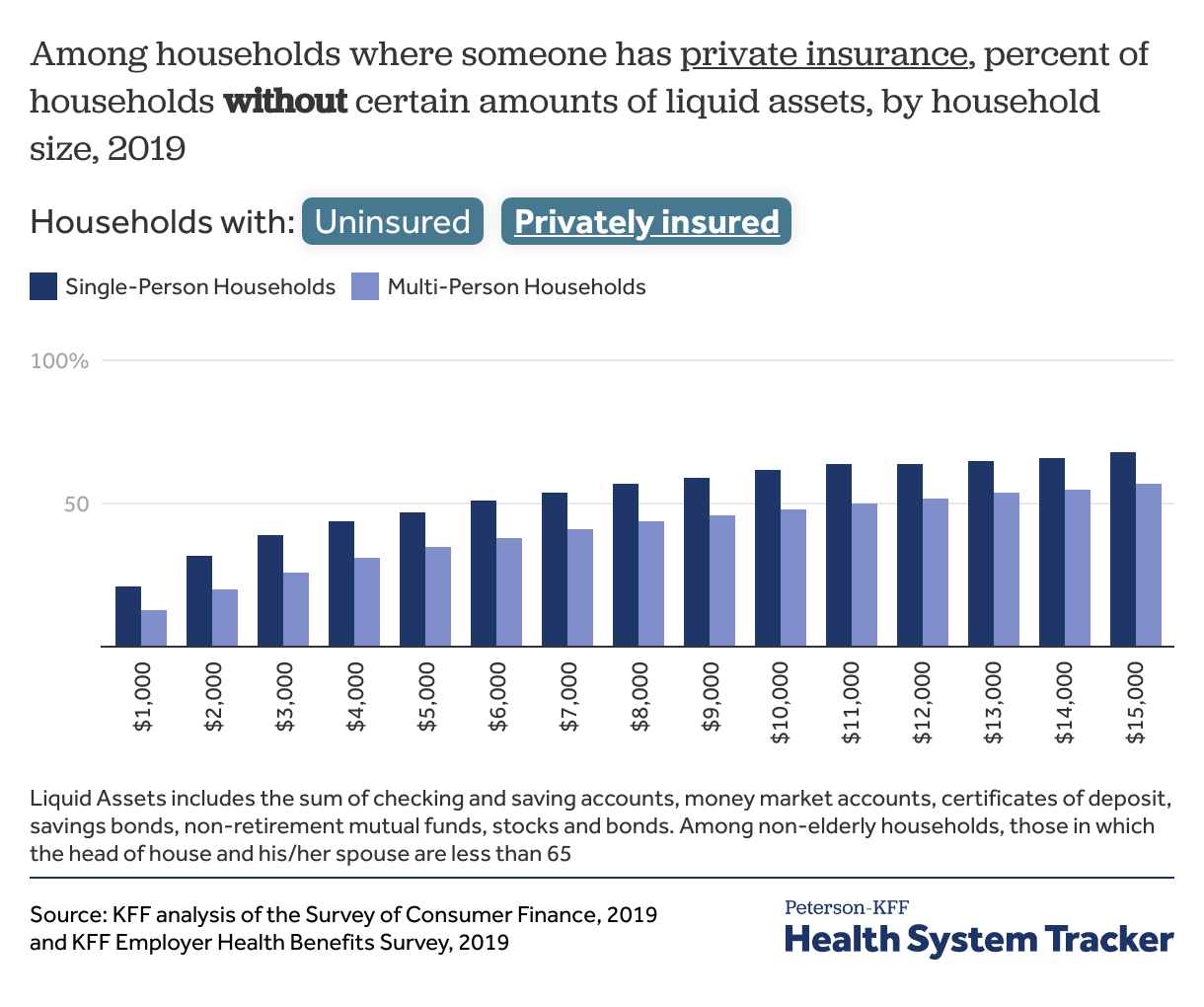 How do families cover emergency expenses?

When faced with high medical bills, people may turn to friends and relatives for help. Approximately two-thirds of non-elderly households indicated that, in an emergency, they could obtain $3,000 of financial assistance from friends or relatives. Households with higher incomes are more likely to say this is possible – 80% of households with incomes over 400% of the FPL say they could rely on personal networks to obtain $3,000, compared with 62% of households with incomes between 150% and 400% of the poverty level.

A third of households do not think they could borrow $3,000 from friends or relatives in case of an emergency 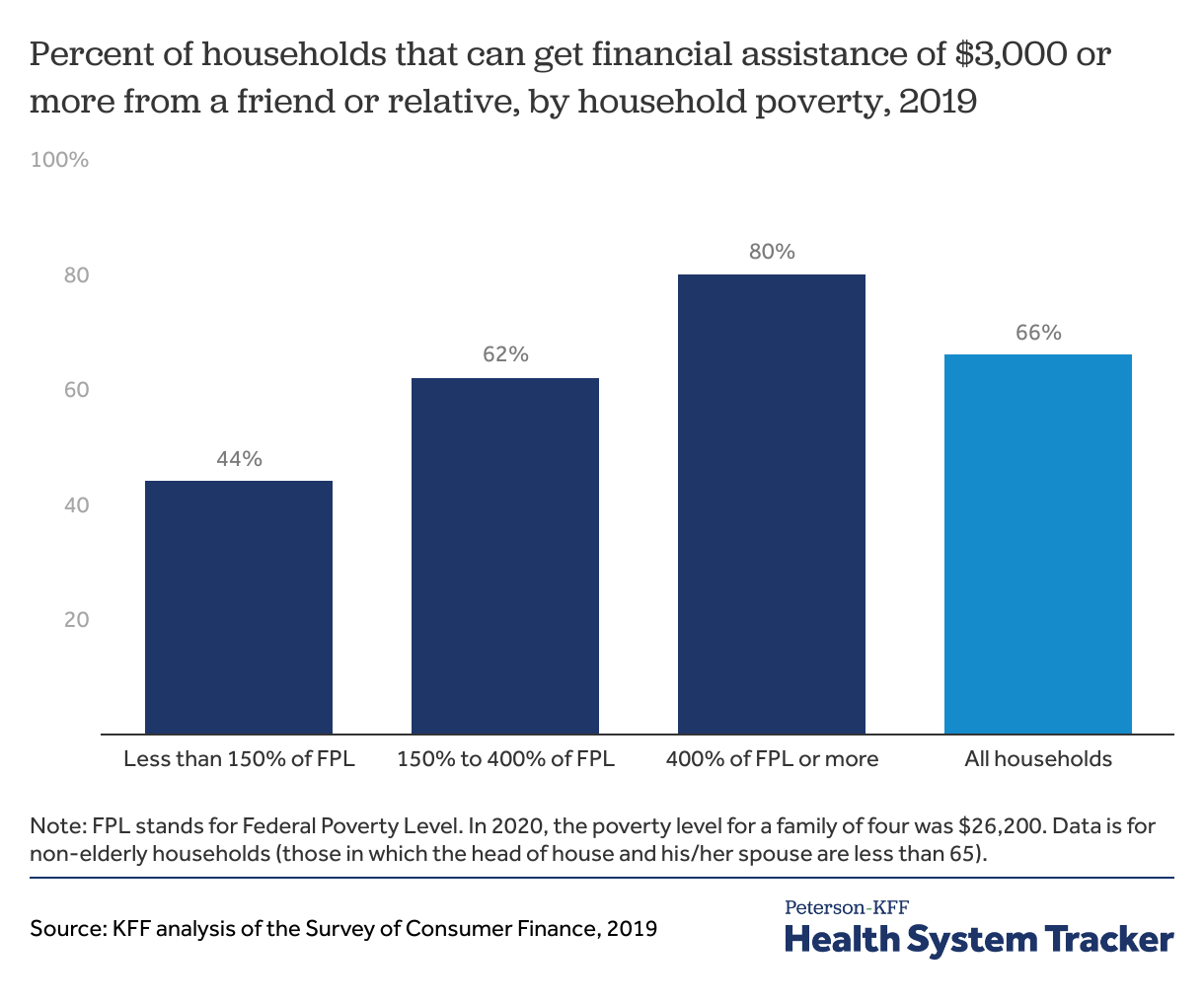 KFF’s previous analysis on the subject found that even relatively small medical expenses can lead to persistent debt. The Survey of Household Economics and Decisionmaking (SHED) is an annual survey conducted by the Federal Reserve that asks individuals about their income and how they think about household finances. The 2020 SHED asked respondents how they would cover an emergency expense of $400. A significant share of non-elderly adults enrolled in an employer or non-group health plan indicated that they would not be able to meet this amount from their current savings, including 16% who indicated they would put a $400 emergency expense on their credit card and pay it off over time, 2% who reported that they would take a bank loan and 6% said they would be unable to meet the expenses.

KFF previously collaborated with the Los Angeles Times to field a national survey concerning the experiences of adults with employer-sponsored health insurance. A significant share of respondents reported affordability challenges, including four in ten (40%) who said that their family had problems paying for medical bills or affording premiums. These challenges were more pronounced among lower-income households. Sixty-five percent of people in households earning less than $40,000, and 51% of people in households with incomes between $40,000 and $75,000, indicated that they found it difficult to afford premiums or care, despite employer-sponsored coverage.

Over half of survey respondents (51%) on an employer plan reported that someone in their household skipped or postponed care or filling a prescription in the past year because of the expense, and 17% said they have had to make difficult sacrifices to pay health costs. During the last year, 26% of adults on an employer plan reported cutting spending on food, clothing, and household items to pay for health-related expenses, and 20% said that they took on additional credit card debt. 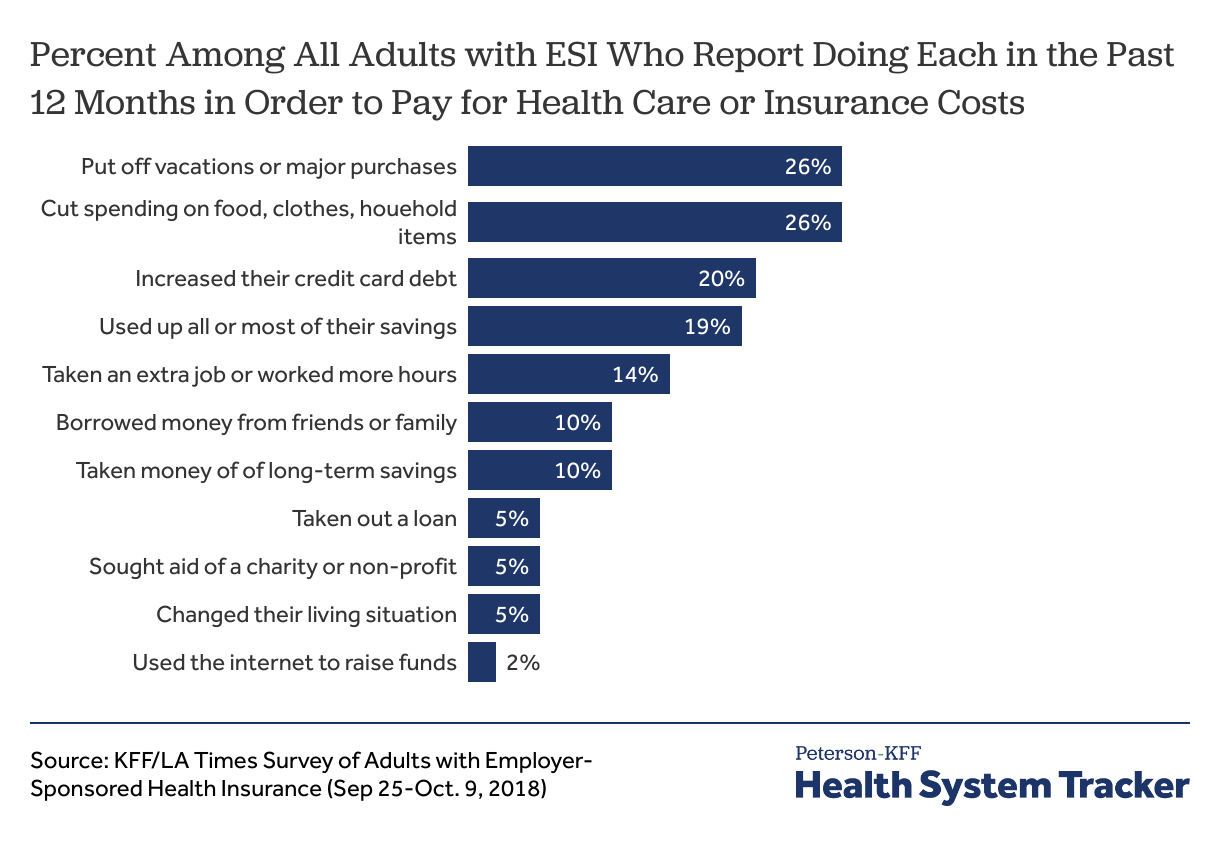 By shifting a portion of health cost onto people using services, health plan cost-sharing reduces the expense paid by the insurer, thereby potentially lowering the premium. More importantly, requiring consumers to contribute encourages them to carefully consider which services they will use, and, depending on how the cost-sharing is structured, may encourage the use of lower-cost care. While cost-sharing may reduce premiums, evidence suggests it also might discourage people from seeking needed and beneficial care.

As cost-sharing levels have increased, so has concern about cost-related access barriers among people with private coverage. While low-income people enrolled in Medicaid or the Marketplaces face little or no cost-sharing, employer plans generally do not vary cost-sharing based on income. In 2020, just 7% of firms with 50 or more workers had programs to help lower-wage workers meet cost-sharing obligations.

Much of the discussion around affordability of private coverage has centered on premium costs. A broader notion of affordability would focus on the ability of families, particularly low- and middle-income families, to meet potentially high out-of-pocket expenses associated with a chronic or acute illness. In addition to high cost sharing deterring needed health care, it can also create financial instability. In the U.S., nearly 1 in 10 adults owe medical debt.

The 2019 Survey of Consumer Finances (SCF) is a triennial, nationally representative household survey conducted by the Federal Reserve Board. The survey has a dual frame, with respondents selected from both a national area probability design and a sample of households with high-income tax returns. The poverty levels are defined as $12,490 for a single-person household and $4,420 for every additional person in the household, and are based on the 2019 Poverty Guidelines as defined by the Department of Health and Human Services. The 2019 SCF is based on about 4,100 non-elderly households. Weights were applied to ensure that percentages were representative of the population.

The SCF defines a family as a “primary economic unit (PEU),” or all the individuals living in a household who are financially interdependent with the dominant individual or couple. Income and assets are measured for the PEU in the household. The definitions of the different types of assets and debts are available here. In this analysis, we first look at the median levels of assets of non-elderly households. We look at median assets because the averages are significantly affected by a small number of households with high levels of assets

The SCF provides information about the types of insurance present in each household, and about whether each member had coverage or not. Unlike financial characteristics, insurance questions are asked of all members of a household, including members that are not part of the PEU, which could be a relative who is financially independent or a financially independent non-relative living in the household. This creates some potential ambiguity when we look at households in which someone has private coverage because it is possible that the only people with private coverage are not part of the PEU. Because we have information, about whether or not each person in the household has some coverage or not, we were better able to target the members of the PEU in identifying households where someone was uninsured. We selected only households where the financially dominant individual, his or her spouse or partner, or his or her financially dependent children (regardless of the child’s age) were uninsured. Many households have multiple forms of coverage.

The Survey of Household Economics and Decisionmaking (SHED) is an annual survey of adults conducted by the Federal Reserve Board. The survey is based on the Ipsos KnowledgePanel, a nationally representative probability-based online panel. Ipsos selected respondents for KnowledgePanel based on address-based sampling (ABS). The questions asked of the panel are intended to gather information from the individual about how they make household economic decisions. The SHED survey finishes data collection in October and then releases the report and public use file in May of the following year.

Net financial assets, is a broader measure of the household’s total resources. This category includes all financial assets (including assets dedicated to retirement) reduced by the household’s unsecured debts. For this measure, the value of assets is reduced by credit-card debt and other unsecured loans, but debts secured by real property (such as mortgage debt) and loans for vehicles and education are not counted against assets. This category measures how much money a household has available to pay medical expenses after meeting some debt obligations, although the money may not be easily accessible in all cases. 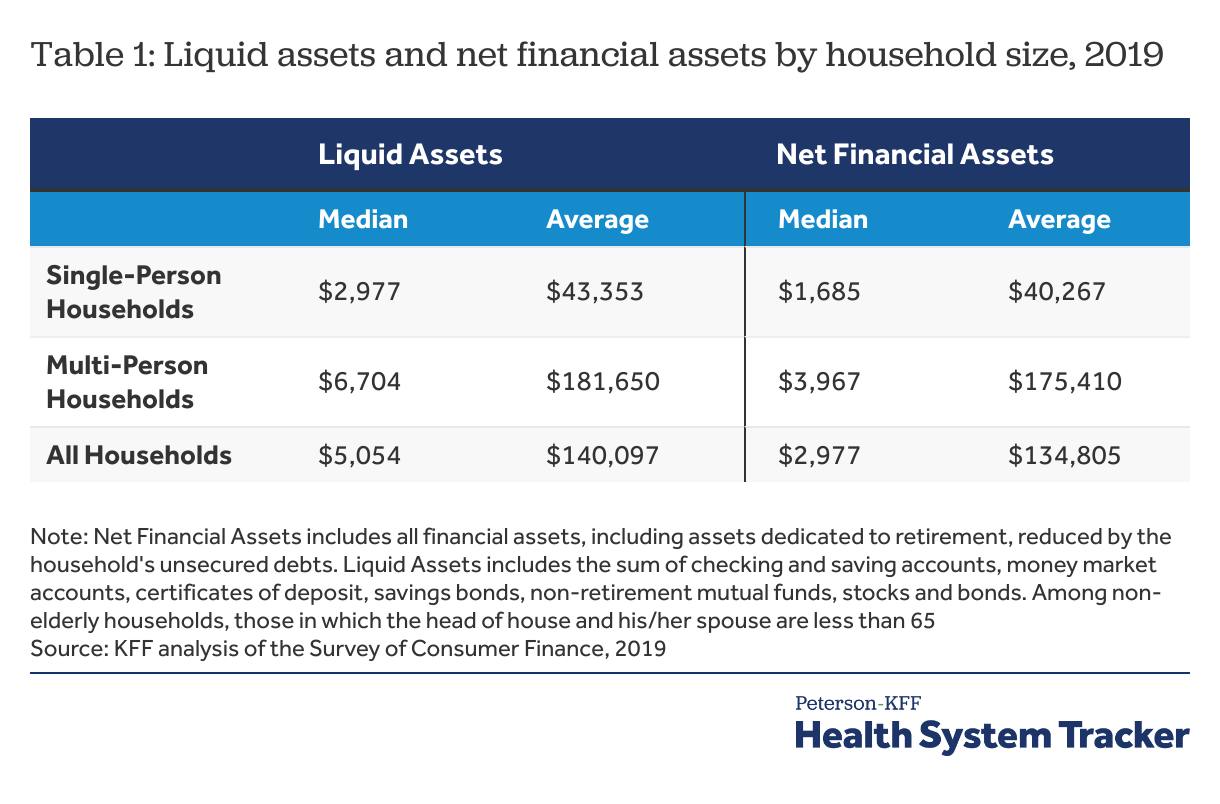 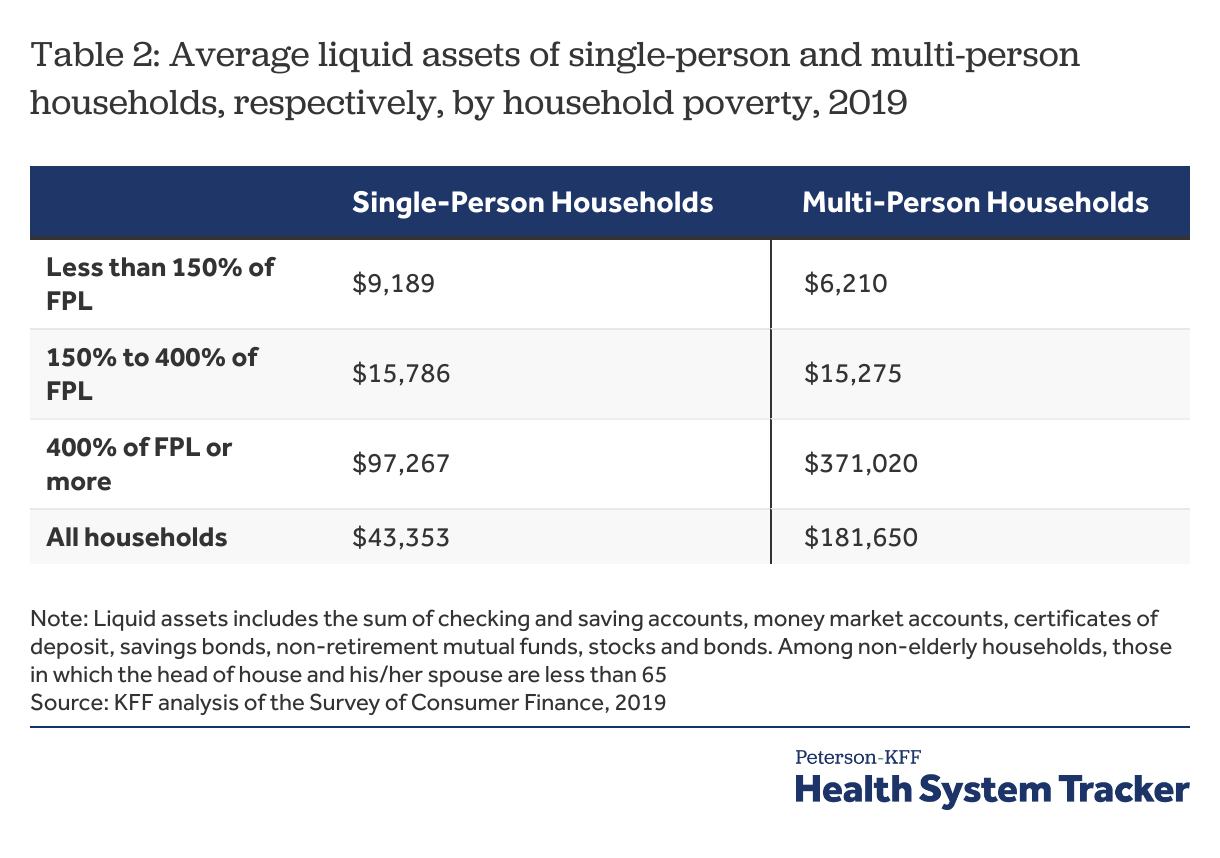 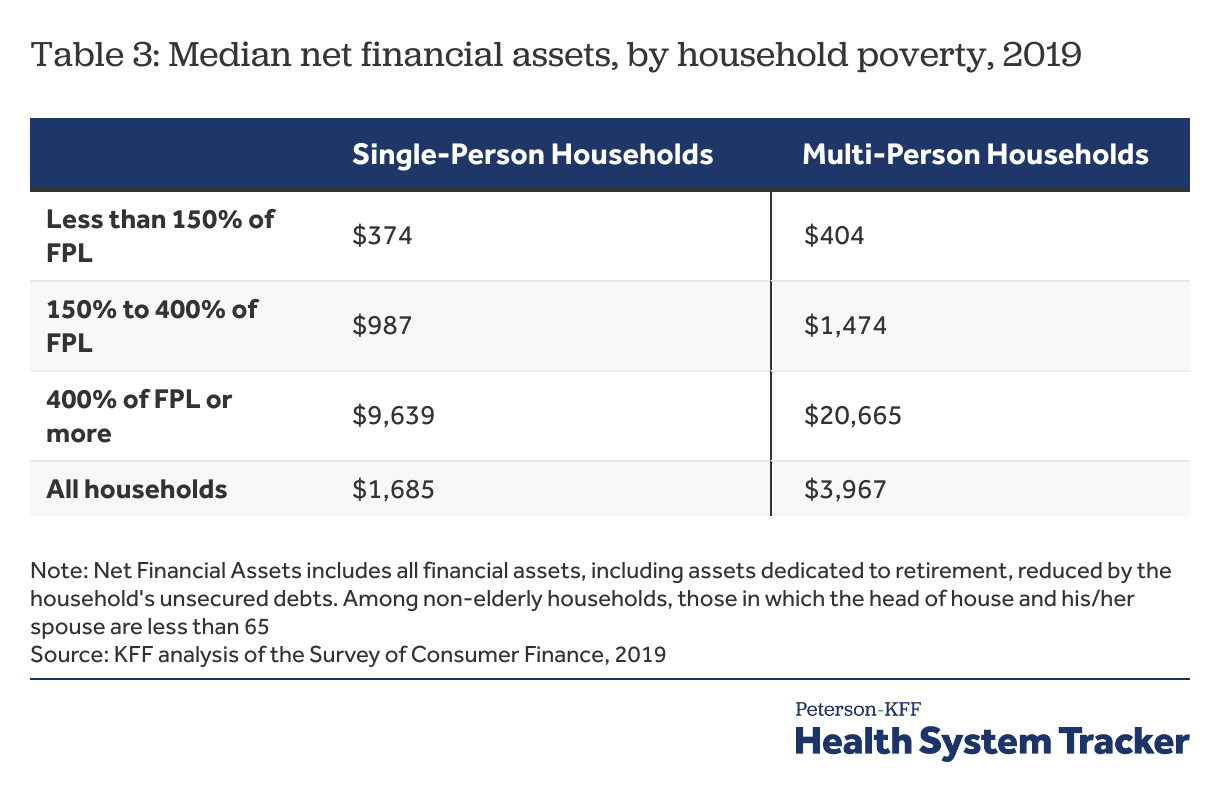 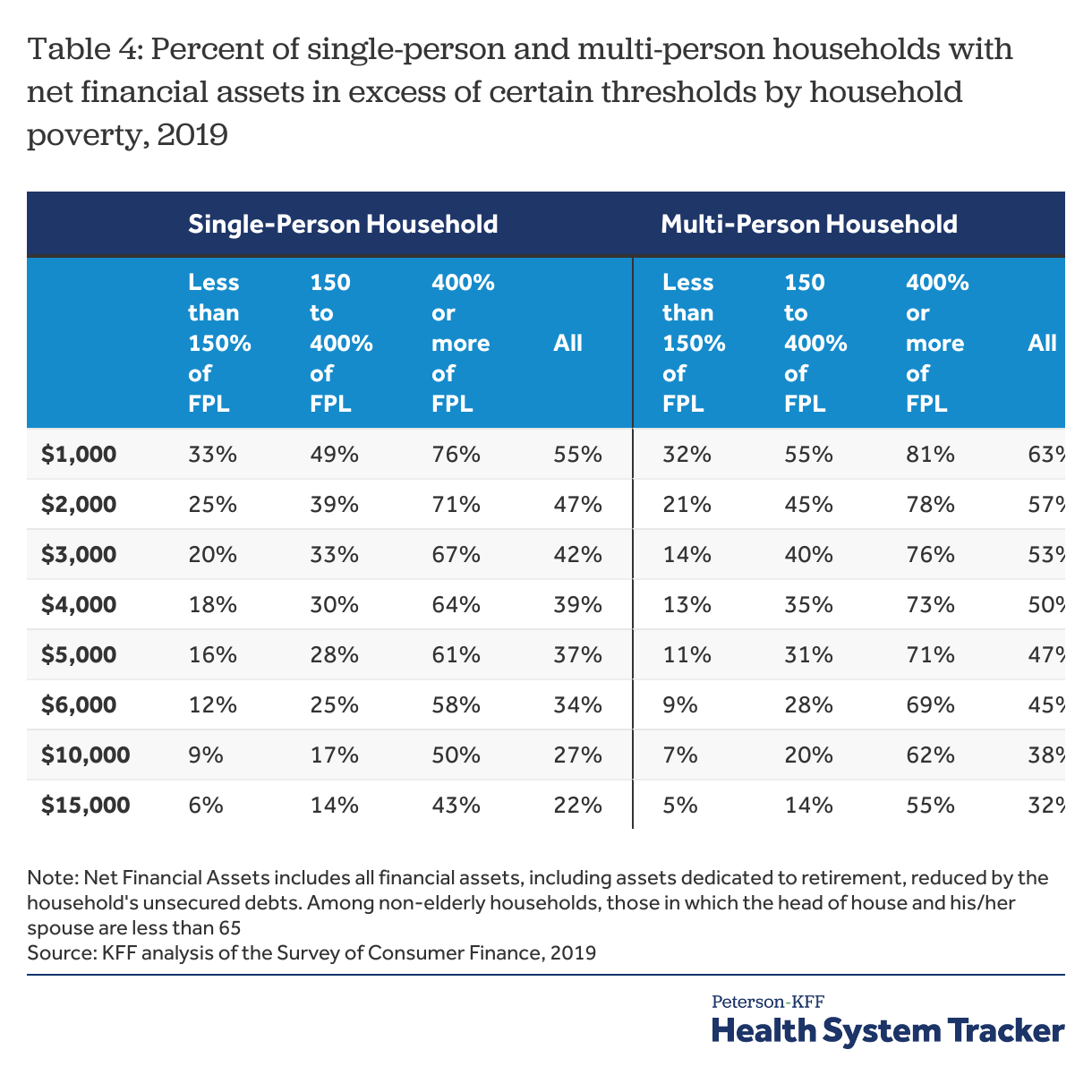