The cost of employer sponsored health insurance—including premiums, deductibles, and other out-of-pocket costs—has risen steadily over time. Few employer plans (just 7% of firms with 50 or more workers in 2020) have programs to help lower-wage workers meet cost-sharing obligations. Low-income workers offered health insurance through their employer are typically not eligible for subsidies on the Affordable Care Act Marketplaces, even if they would face lower costs to buy coverage and with reduced cost sharing. While many employers pay a significant portion of health insurance premiums, some workers face relatively high contributions to enroll in coverage, particularly when enrolling dependents.

In this brief, we analyze the Current Population Survey to look at the share of family income people with employer-based coverage pay toward their premiums and out-of-pocket payments for medical care. We specifically look at people in working families, limiting the analysis to non-elderly people living with one or more family members who are full-time workers and have employer-based coverage.

We find that people in lower-income families with employer coverage spend a greater share of their income on health costs than those with higher incomes, and that the health status of family members is associated with higher health-related expenses.

Compared to higher-income people, those with lower incomes spend a significantly higher share of their income on health premiums and out-of-pocket expenses 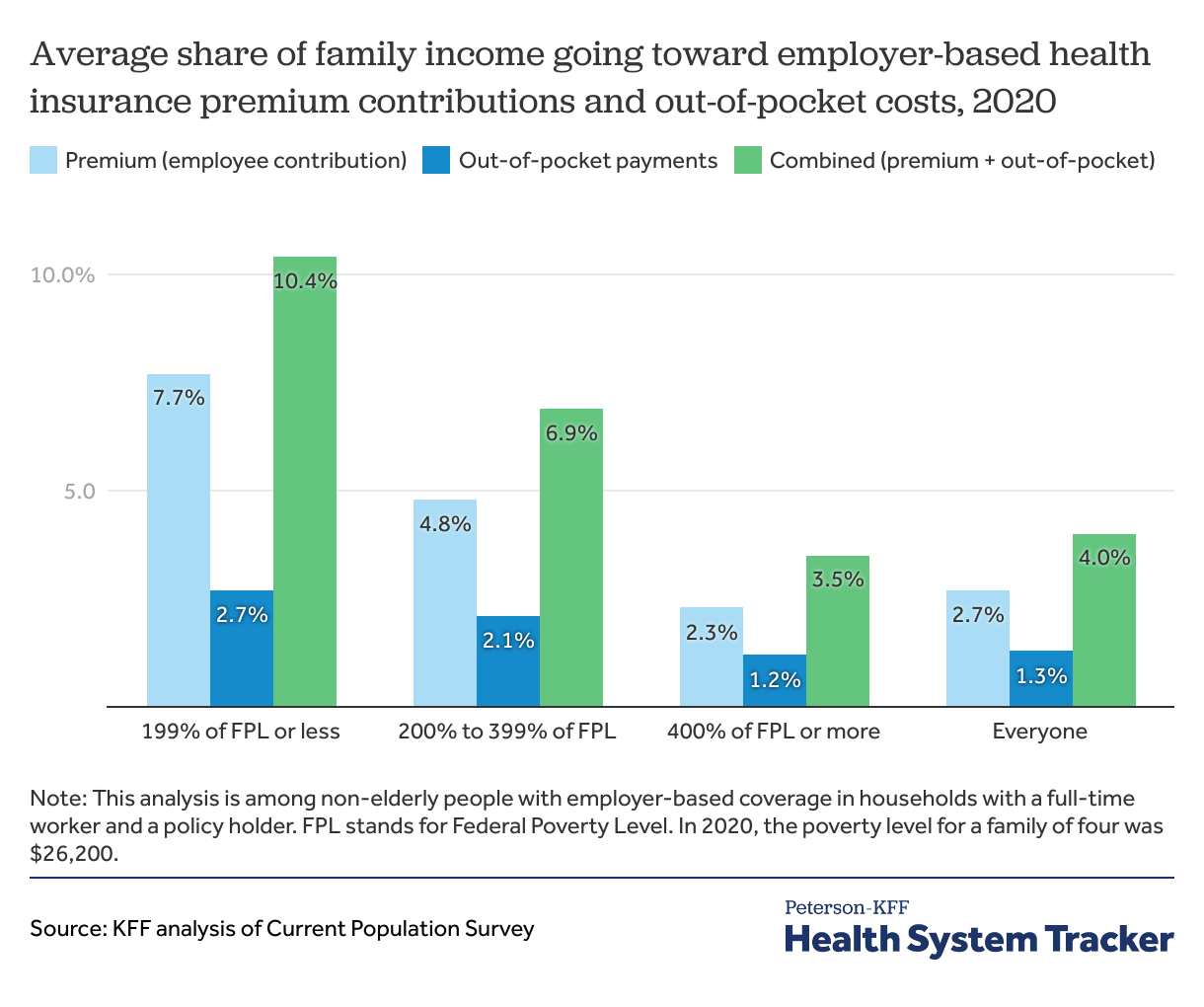 Overall, individuals in families with employer coverage spend 2.7% of their income on the worker contribution to enroll in employer-based coverage and another 1.3% of their income on out-of-pocket spending such as the cost sharing typically required when enrollees use services. Among people with employer-based coverage, the share of family incomes spent on health insurance premium contributions and payments for medical care vary considerably by income. For those in families with incomes at 199% of federal poverty and below, the average family payments for health insurance premiums and medical care, combined, average approximately 10.4% of family income. A substantial share of that spending is for the premium contributions. Meanwhile, those in families with incomes at or above 400% of the federal poverty level pay about 3.5% of family income on premium contributions and medical expenses. 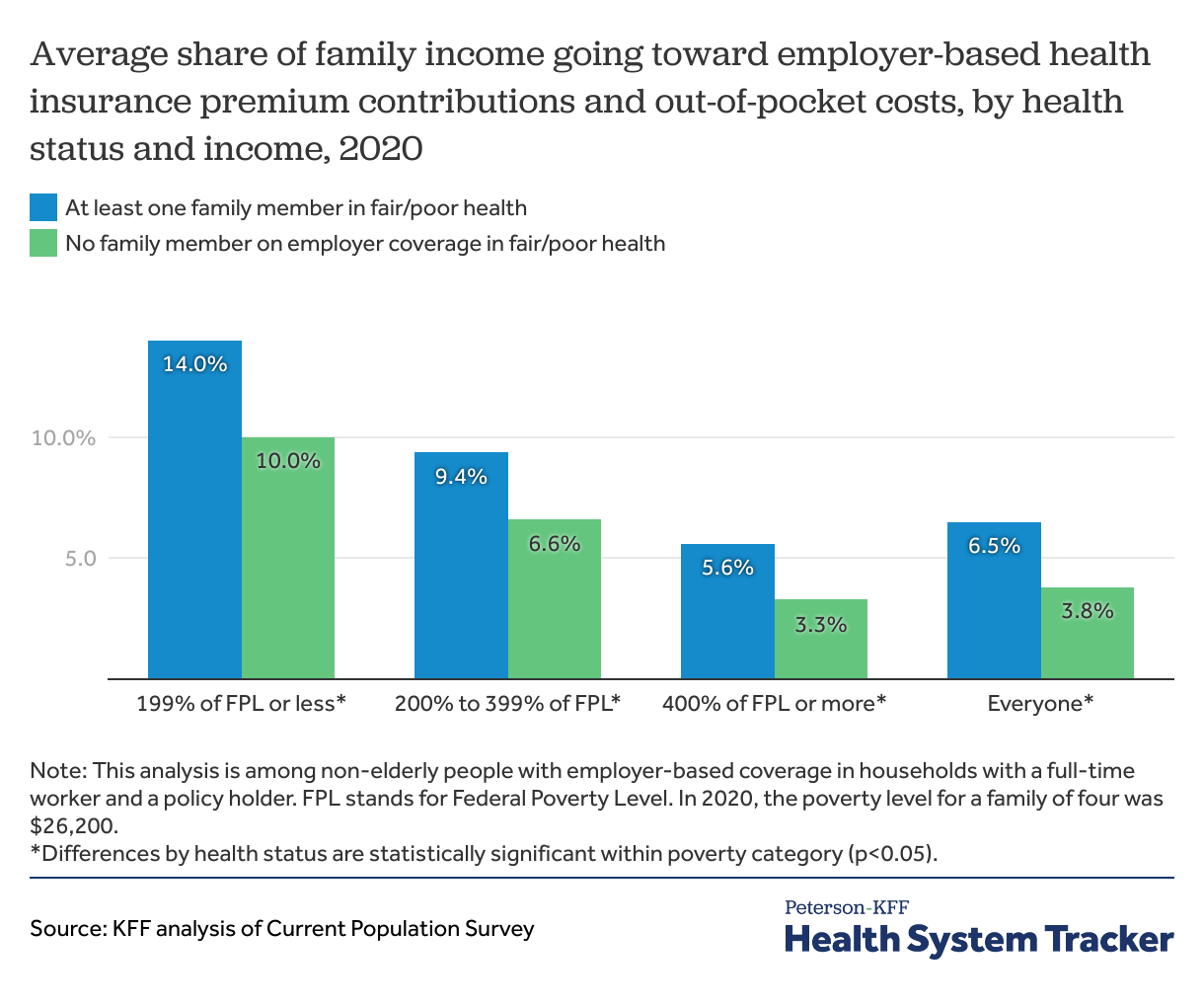 Living with someone in fair or poor health adds significantly to family health care spending, even for people with employer-based coverage. People with employer coverage often face a deductible which may require the enrollee to spend thousands of dollars before the plan covers most services. We compared the share of family income spent on premiums and out-of-pocket medical spending, between households where everyone covered by employer coverage reported being in better health (good, very good, or excellent health) to those with at least one member in worse health (fair or poor). Overall families with all members in better health spend 4% of their income on premium contributions and out-of-pocket medical expenses compared to 7% in households with at least one member in fair or poor health.

Employer-based coverage is the most common source of health insurance for non-elderly Americans. The degree of financial protection from high health care costs varies considerably across employer plans and by family income. People in lower-income families (below 200% of poverty) spend 10.4% of their family income, on average, on premiums and out-of-pocket costs, compared to 6.9% for people in families with incomes between 200% and 399% of poverty, and 3.5% for people with incomes of 400% of poverty or more. Spending toward premium contribution and out-of-pocket medical costs is higher for families with at least one member in worse health across all income groups.

Employer health plans can expose low and moderate-income families to thousands of dollars for premium contributions and cost-sharing, which can lead to medical debt. Many Americans, even those with private health insurance, do not have enough liquid assets to meet deductibles or out-of-pocket maximums.

While federal law provides premium subsidies and cost sharing reductions for low-income people enrolled in health plans through the Affordable Care Act (ACA) Marketplaces, there are no similar subsidies for people with employer coverage. Relatively few employers vary cost-sharing or premium contribution with a worker’s income.

The employer-based coverage affordability requirement has been a long-standing issue under the ACA. The ACA requires employers (with more than 50 employees) to offer full-time workers with health coverage that meets standards for affordability and minimum benefits. Employers that do not meet these standards are required to pay a tax penalty. Coverage is considered affordable if the contribution required for employee self-only coverage is less than 9.61% of family income in 2022, regardless of the family income or family size. The affordability test is applied to the cost of self-only coverage even if the employee chooses family coverage with a contribution that is a much higher share of income (known as the “family glitch”). The family glitch locks an estimated 5.1 million dependents out of ACA Marketplace subsidies. Additionally, those paying just under the affordability threshold toward employer-based coverage (9.61% of income in 2022) are not eligible to get subsidies through Marketplaces, even though premium contributions on the Marketplaces would be capped at a lower 8.5% of income threshold.

The cost of employer-sponsored health insurance has been steadily increasing over the past decade; premiums are up 47% and deductibles are up 92% from 2011 to 2021. More workers are covered by health plans with high-deductibles that may act as barriers to care, especially for lower-incomed workers.

Over time, as the total cost of employer coverage has risen, the share of people with employer-based coverage has fallen among those with lower and moderate incomes, but has remained fairly stable for people with incomes above 400% of poverty. In firms where there are more lower-wage workers compared to firms with fewer lower-wage workers, employees must contribute a greater share of the total cost of health insurance over time. Prohibitively high costs to enroll in employer coverage or afford medical expenses creates access barriers to enrolling in coverage and affording medical care or prescription drugs, putting Americans at risk of financial instability and medical debt.

The Annual Social and Economic Supplement (ASEC) to the Current Population Survey provides information about employment, income, health coverage and demographic characteristics of people living outside of institutions in the US. Beginning in 2011, the ASEC began collecting information from respondents on the amounts they pay for health insurance premiums and out-of-pocket costs for medical care, which we use to measure average spending by people at different levels of poverty. We use the 2021 ASEC with a focus on non-elderly people with employer-based coverage in households with a full-time worker and a policy holder. We exclude people who report other types of coverage, therefore some households may have more health spending than reported here.

The ASEC asks respondents about coverage at the time of the interview. These findings are representative of 136 million non-elderly people with job-based coverage, including more than 9 million with family incomes of less than twice poverty and another 36 million with incomes between 200 and 400 percent of poverty. A “family” is related people living in the same household. Subfamilies are considered part of one family. We did not include out-of-pocket spending on over-the-counter items as spending for medical care. The analysis does not consider potential tax deductions that may be available for premium contributions or out-of-pocket medical spending. 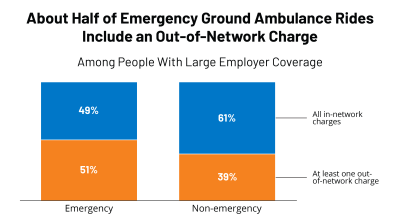