Pregnancy is one of the most common reasons for a hospitalization among non-elderly people. In addition to the cost of the birth itself, pregnancy care also involves costs associated with prenatal visits and often includes care to treat psychological and medical conditions associated with pregnancy, birth, and the post-partum period.

To examine the health costs associated with pregnancy, childbirth, and post-partum care, we examined a subset of claims from the IBM MarketScan Encounter Database from 2018 through 2020 for enrollees in large employer private health plans. We look at health spending (both the amount paid by insurers and that paid out-of-pocket by enrollees) for female enrollees of reproductive age who give birth, compared to those who do not give birth, holding age constant.

We find that health costs associated with pregnancy, childbirth, and post-partum care average a total of $18,865 and the average out-of-pocket payments total $2,854 for women enrolled in large group plans. We also examine how pregnancy, childbirth, and post-partum health spending among large group enrollees varies by the type of delivery, finding these costs for pregnancies resulting in a vaginal delivery average $14,768 ($2,655 of which is paid out-of-pocket) and those resulting in cesarean section (C-section) average $26,280 ($3,214 of which is paid out-of-pocket).

Women who give birth incur almost $19,000 in additional health costs and pay about $3,000 more out-of-pocket than women of the same age who don't give birth Click To Tweet

How we measure the cost of pregnancy, birth, and post-partum care

Some previous analyses of the cost of pregnancy and childbirth have looked at the cost of specific services, such as vaginal and cesarean delivery, or services with a pregnancy diagnosis code. However, looking only at specific claims can miss other care associated with pregnancy and birth, such as psychological care, physical therapy, or treatment of other conditions that arise because of pregnancy but are not necessarily billed as a pregnancy related expense.

In this analysis, we take a different approach. Using a regression model controlling for age, we look at the average difference in health spending for women of reproductive age who give birth compared to those of the same age who do not give birth. The benefit of this approach is that it allows us not only to look at the cost of the delivery, but also at all health costs associated with pregnancy, childbirth, and postpartum care.

We limit the analysis to people who give birth in a hospital (either a live birth or stillborn) and do not include pregnancies that end in abortion or miscarriage. This analysis only includes the cost of the pregnancy, delivery, and post-partum recovery for the woman, and not any subsequent health spending for care of the infant.

How much does pregnancy, childbirth, and post-partum care cost?

We estimate that pregnant women of reproductive age (ages 15 to 49) enrolled in large group health plans incur an average of $18,865 more in health care costs than women who do not give birth. This additional health spending associated with pregnancy, delivery, and post-partum care includes both the amount paid by insurance (an average of $16,011) and that paid out-of-pocket by the enrollee (an average of $2,854). There is significant variation around these averages, and costs vary significantly by the type of delivery.

Women who give birth incur nearly $19,000 in additional health costs and pay almost $3,000 more out-of-pocket than those who do not give birth 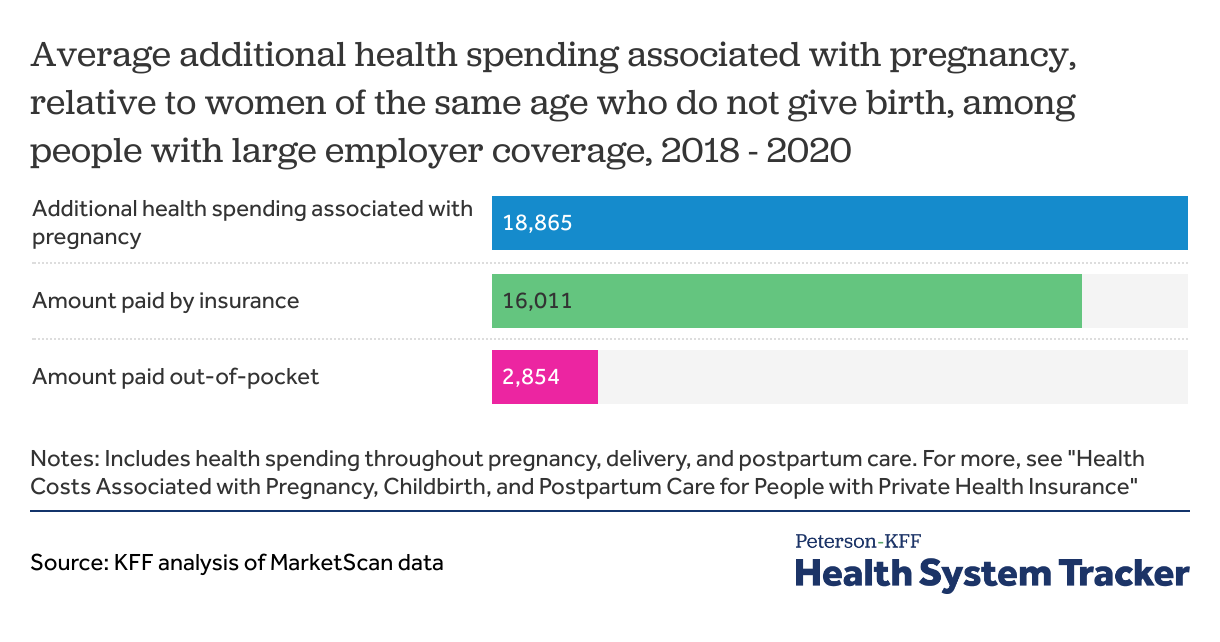 How much pregnancy-related health spending is for hospitalizations and outpatient care?

These out-of-pocket costs only include amounts paid for cost-sharing (deductibles, coinsurance, and copayments) under the health plan. Therefore, out-of-pocket spending on fertility care is generally missed because these services are not often covered by insurance. Similarly, we do not include any balance bills sent by out-of-network providers directly to patients. We previously estimated that 10% of in-network admissions for maternity care included an out-of-network charge putting patients at risk for surprise medical bills. However, as of January 2022, the No Surprises Act prohibits surprise billing by out-of-network providers when a patient was admitted at an in-network hospital.

How do pregnancy and childbirth costs vary by type of delivery?

Health costs associated with pregnancy, childbirth, and post-partum care vary significantly based on whether the baby is born by cesarean section or vaginal delivery. Over the course of their pregnancy, delivery, and post-partum period, large group enrollees who give birth via cesarean section incur an average of $26,280 more in healthcare costs than those who do not give birth. By contrast, this amount for women with a vaginal delivery averages $14,768. 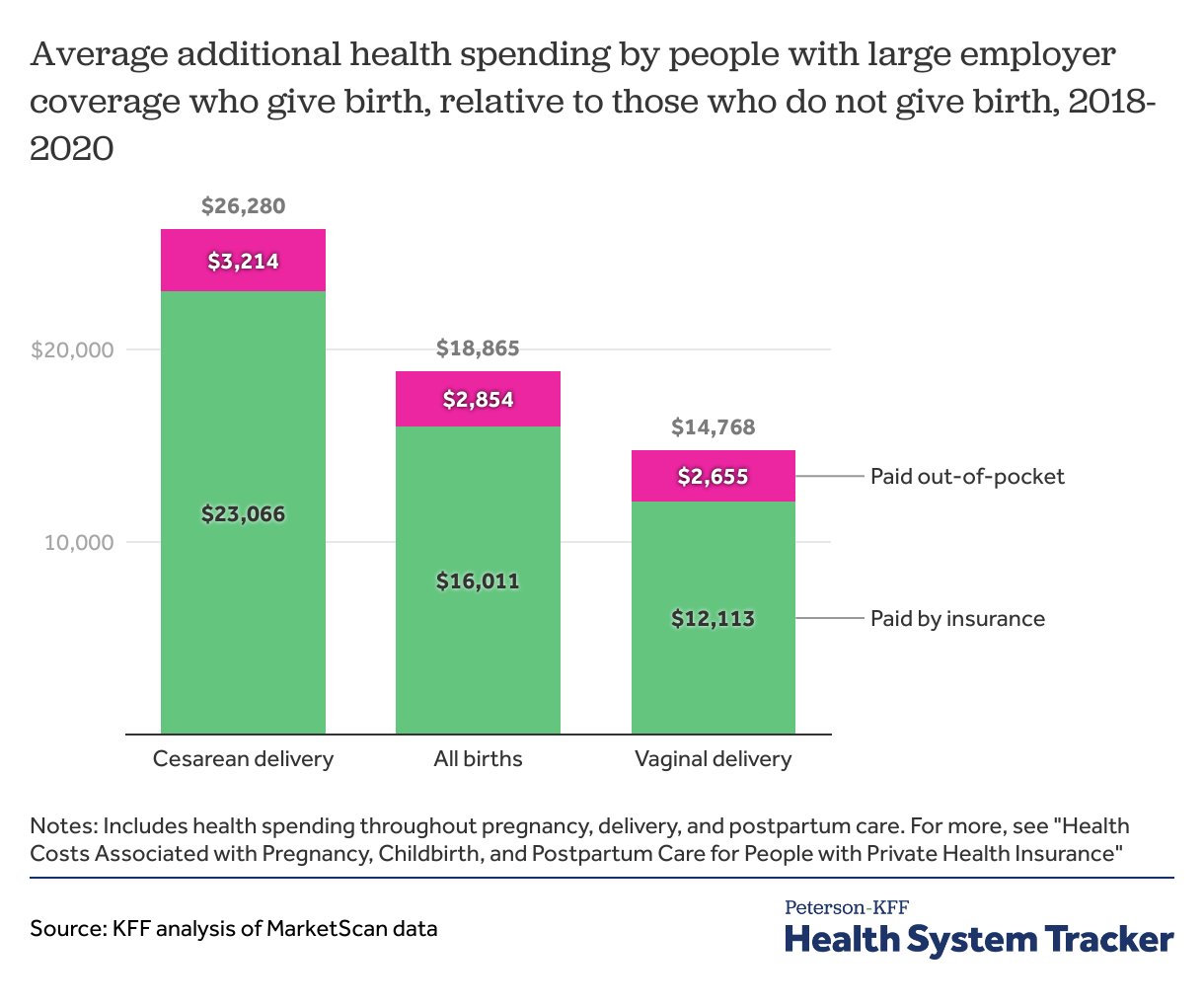 What are the implications of high out-of-pocket costs for pregnancy and childbirth?

The frequency and intensity of services associated with pregnancy and childbirth can lead to considerable out-of-pocket expenses for new parents, particularly those covered by private insurance.

On average, over the course of their pregnancies, pregnant women enrolled in large employer health plans incur $2,854 more in out-of-pocket costs than similar women who are not pregnant. These costs are more than many families can afford. Roughly one third of multi-person households and half of single-person households would not have the liquid assets needed to cover typical out-of-pocket costs associated with pregnancy and childbirth in private health plans. About half of people who give birth in a given year are covered by private insurance, and the remainder are mostly covered by Medicaid, which generally has little or no out-of-pocket liability.

Medical care for the infant can result in even more out-of-pocket costs for families with private insurance coverage. And these out-of-pocket health costs arrive just as these parents begin taking on additional costs of caring for a child. Many new parents also experience income losses due to a lack of paid parental leave, which can leave many new parents vulnerable to incurring medical debt.

This analysis has some limitations, including that we do not control for health status before the pregnancy. It is possible women who give birth are somewhat healthier on average going into their pregnancies than women of the same age who do not give birth. Conversely, it is also possible that health conditions present before pregnancy may be incidentally discovered during pregnancy. Although we do not control for health status, health status and spending are strongly correlated with age, for which we do control.

We are only including health spending that happens through the health plan, so do not include care that is paid fully out-of-pocket, which would include most fertility treatments (as this care is often not covered by insurance).

We describe our findings as applying to pregnant women, though some of the births included were for female enrollees under the age of 18. The MarketScan sex variable is binary and our analysis is limited to the classification on the health record.

This analysis uses claims from the IBM Health Analytics MarketScan Commercial Claims and Encounters Database, which contains claims information provided by a sample of large employer plans. MarketScan allows for enrollees to be tracked for their duration at one contributing employer, and we used a subset of claims for enrollees covered in each of three years, 2018 through 2020. All dollar values are reported in 2020 nominal dollars. To make MarketScan data more representative of large group plans, weights were applied to match counts in the Current Population Survey for enrollees at firms of a thousand or more workers by sex, age and state. Weights were trimmed at eight times the interquartile range.

We further limited the sample to female enrollees between ages 15 and 49 who were continuously enrolled during the 2018-2020 period, to avoid including costs for women who changed coverage during the pregnancy. In total, this analysis used claims for almost 2,267,200 female enrollees, which represents about 15% of the estimated 14,800,000 women of reproductive age enrolled in large group market plans (plans offered by employers with one thousand or more workers) in 2018.

IBM assigns a DRG to each admission using the Centers for Medicare & Medicaid Services (CMS) Grouper. This method selects a DRG for the admission based on the diagnosis and procedures a patient received during the stay. We identify women as having a pregnancy if, between August 2018 and September 2020, they had an admission that was designated as a delivery (783-788, 796-798 and 805-807). We then modeled spending for these enrollees between January 2018 and December 2020, controlling for age and whether they had multiple pregnancy related admissions over that period. This method does not include the cost of pregnancy for enrollees who do not give birth (i.e., those pregnancies ending in a miscarriage or abortion).

Claims data available in MarketScan allows an analysis of liabilities incurred by enrollees with some limitations. First, these data reflect cost sharing incurred under the benefit plan and do not include balance-billing payments that beneficiaries may make to health care providers for out-of-network services or out-of-pocket payments for non-covered services, meaning that we may understate the costs associated with pregnancy. Secondly, claims data show the retail cost for prescription drugs and do not include information about the value of rebates that may be received by payers. Third, when showing how spending is divided across types of care (i.e., health services and prescriptions), we combine spending on inpatient and outpatient care because global billing is commonly used for maternity services. In claims data, inpatient costs will therefore sometimes include all services for routine prenatal care, delivery services, and postpartum care since the global maternity claim is typically billed the day of delivery. Lastly, sex is defined as reported on the claim, and we are unable to identify the gender identity of the enrollee. 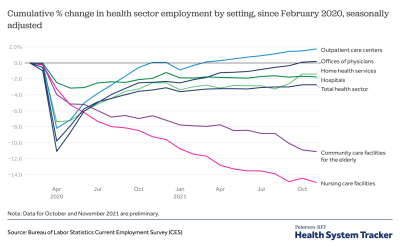