Surprise bills vary by diagnosis and type of admission

There has been considerable attention to the issue of “surprise-medical bills,” or the occurrence of out-of-network charges when a patient was unaware of charges and therefore could not reasonably avoid them. Earlier this year, we estimated that 18% of emergency visits and 16% of inpatient admissions at in-network hospitals resulted in at least one out-of-network bill. Out-of-network charges typically leave patients exposed to higher costs, both through plan cost-sharing requirements as well as “balance billing” from the provider. Balance billing is a practice in which out-of-network providers – who have not negotiated discounted rates with an insurer – charge patients the difference between what they received from the insurer and their full charge for a service. For an in-depth explanation of out-of-network billing, consumer protections and current legislative proposals, see our earlier brief: An examination of surprise medical bills and proposals to protect consumers from them.

This analysis looks at the prevalence of potential surprise medical bills based on patient diagnosis, emergency visits, and type of inpatient admission. We find that these factors can also affect the likelihood that patients may incur surprise out-of-network bills.  As in our earlier brief, we analyzed insurance claims from large employer plans to identify how often inpatient admissions, emergency room visits or outpatient surgeries result in a claim from an out-of-network provider. 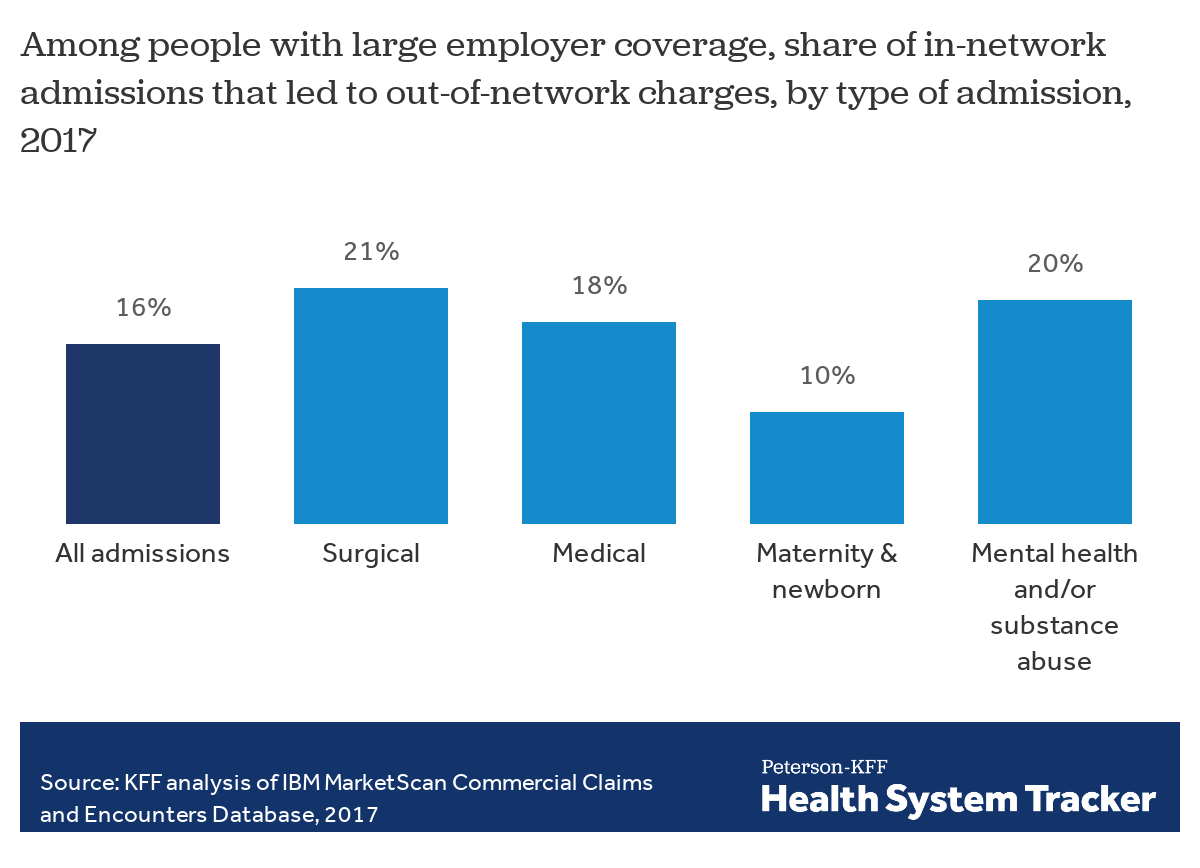 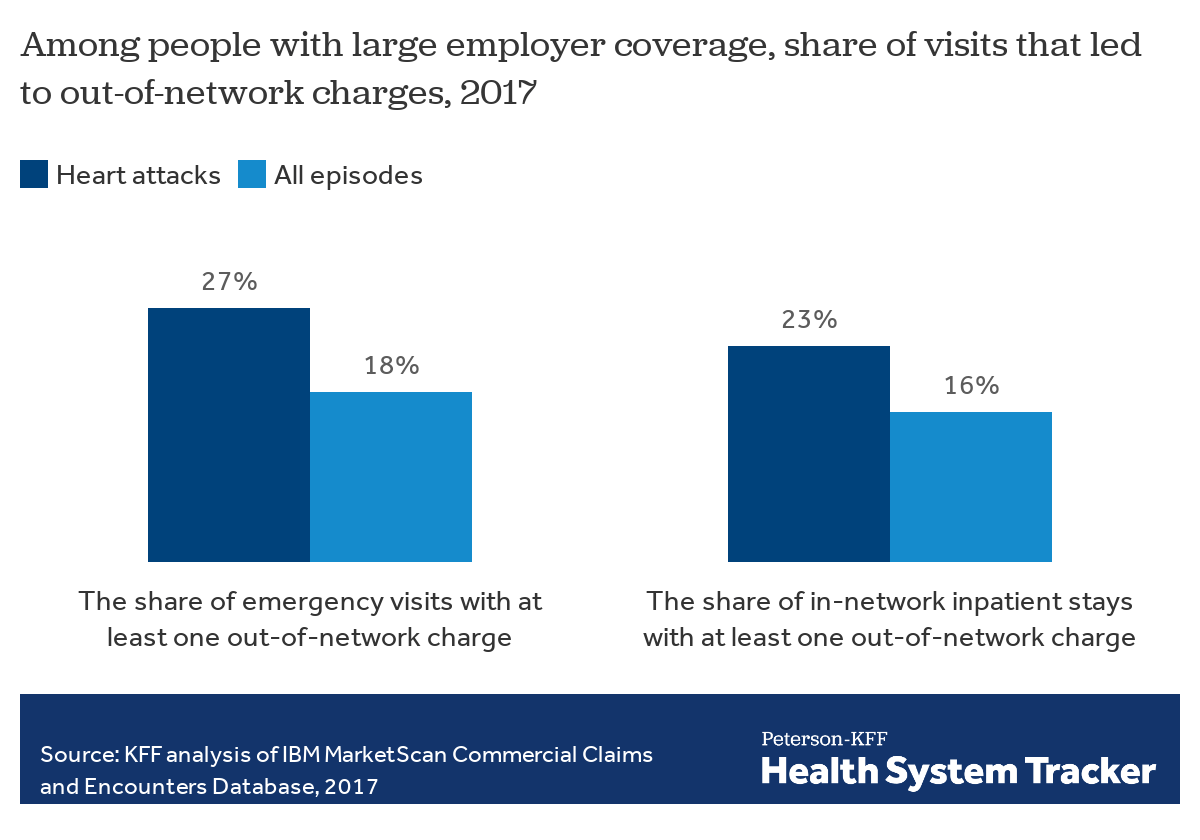 We examined the incidence of out-of-network charges among people covered by large employer health plans who received emergency services or inpatient stays at in-network facilities for a heart attack. The incidence of out-of-network charges was 50% higher for heart attacks compared to the incidence rate of all diagnoses for both emergency services (27% vs. 18%) and for inpatient admission at in-network facilities (23% vs. 16%), respectively.

We also examined the incidence of out-of-network charges among patients having breast cancer surgery. Our method of identifying potential surprise medical bills generally counts out-of-network charges incurred on the same day as a patient’s emergency room visit and charges incurred during the same days that a patient was treated at in-network inpatient facility. This method, however, may not capture all of the surprise bills that certain patients may face. In particular, patients undergoing a mastectomy or lumpectomy — procedures typically performed on an outpatient basis to treat breast cancer — also receive surgical pathology services to diagnose and stage the cancer and determine appropriate treatment. These surgical pathology services may be provided on the same day or on a different day than the breast cancer surgery. 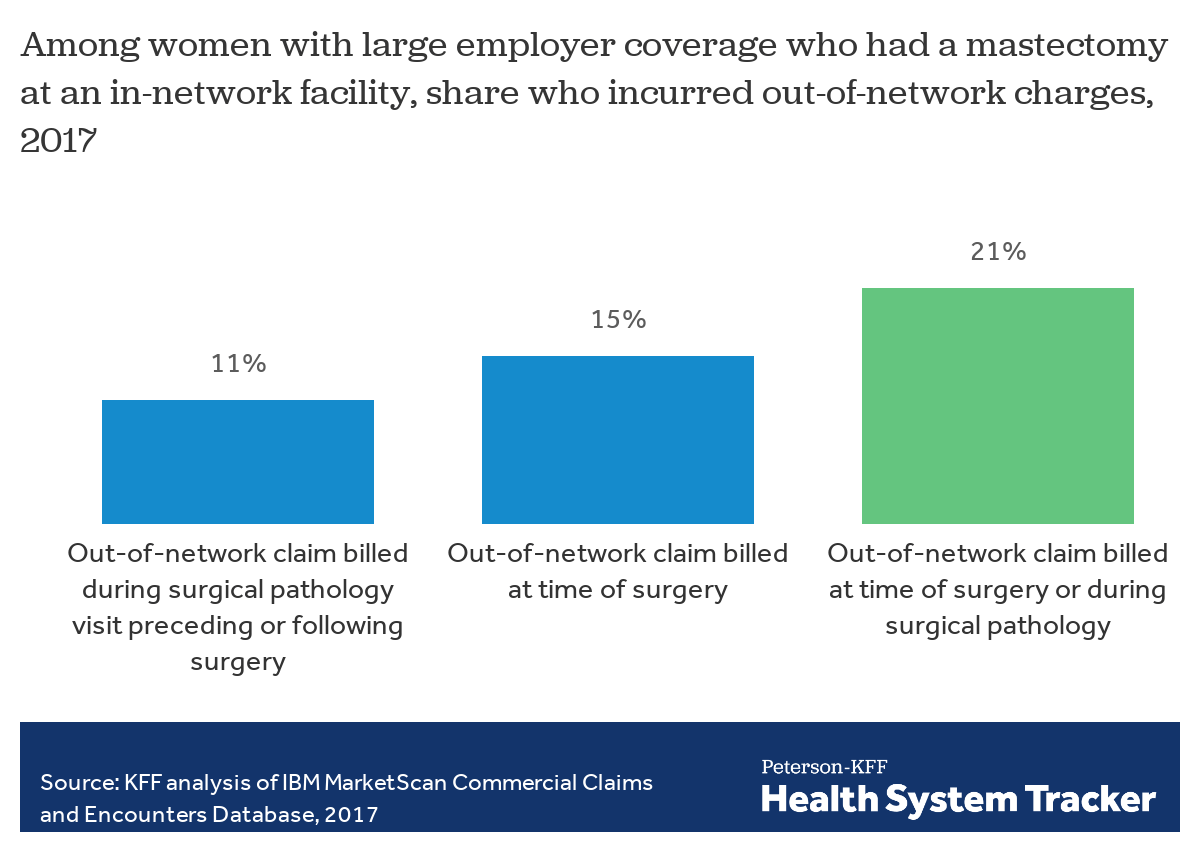 While potential surprise bills are relatively common, in general, patients with serious or complex conditions may be even more likely to face such charges, depending on the types of services they need and providers they encounter. As this analysis shows, admissions at in-network hospitals for maternity and newborn led to an out-of-network bill about 10% of the time, compared to almost a quarter of admissions involving a heart attack. The higher likelihood of surprise out-of-network medical bills, in turn, increases a patient’s financial exposure. While a person giving birth usually has more time to prepare and presumably plan for in-network provider use than a person having a heart attack would, one in ten maternity-related admissions at in-network hospitals still led to an out-of-network charge. The nature of surprise medical bills is that they cannot be reasonably prevented through planning.

We analyzed a sample of medical claims obtained from the 2017 IBM Health Analytics MarketScan Commercial Claims and Encounters Database, which contains claims information provided by large employer plans. We only included claims for people under the age of 65. This analysis used claims for almost 19 million people representing about 22% of the 86 million people in the large group market in 2017. Weights were applied to match counts in the Current Population Survey for enrollees at firms of one thousand or more workers by sex, age, state and whether the enrollee was a policyholder or dependent. Weights were trimmed at eight times the interquartile range. Our methods for defining out-of-network claims, in-network facilities and emergency room visits matches the procedure described here. We defined the type of admissions based on the classifications provided in the Marketscan database, similar to the approach used here, which classifies admissions into five categories: surgical; medical; childbirth and newborn; psychological and substance abuse; and, other. 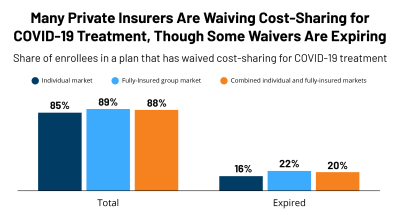