By Nisha Kurani and Cynthia Cox

The United States spends significantly more on healthcare than comparable countries, and yet has worse health outcomes. Much of the national conversation has focused on spending on retail prescription drugs and administrative costs as the primary drivers of health spending in the U.S. President Donald Trump has signed executive orders with broad directives to lower prescription drug costs primarily in the Medicare program, and Democratic Presidential candidate Joe Biden’s healthcare plan also aims to lower prescription drug costs by giving the federal government authority to negotiate prices for all purchasers. While it is true that many brand-name prescription drugs are priced higher in the U.S. than in peer countries, health spending data indicates that other spending categories – particularly hospital and physician payments – are greater drivers of health spending.

This brief examines the drivers of health spending and differences between the U.S. and other nations in Organisation for Economic Co-operation and Development (OECD) that are similarly large and wealthy (identified based on median gross domestic product (GDP) and median GDP per capita, for countries that have available data). In 2018, the U.S. spent nearly twice as much per capita on health as comparable countries. Most of the additional dollars the U.S. spends on health compared to peer nations goes to providers for inpatient and outpatient care. The U.S. also spends more on administrative costs, but perhaps not as much as people think, and spends significantly less on long-term care.

The U.S. spends twice as much as comparable countries on health, driven mostly by higher payments to hospitals and physicians 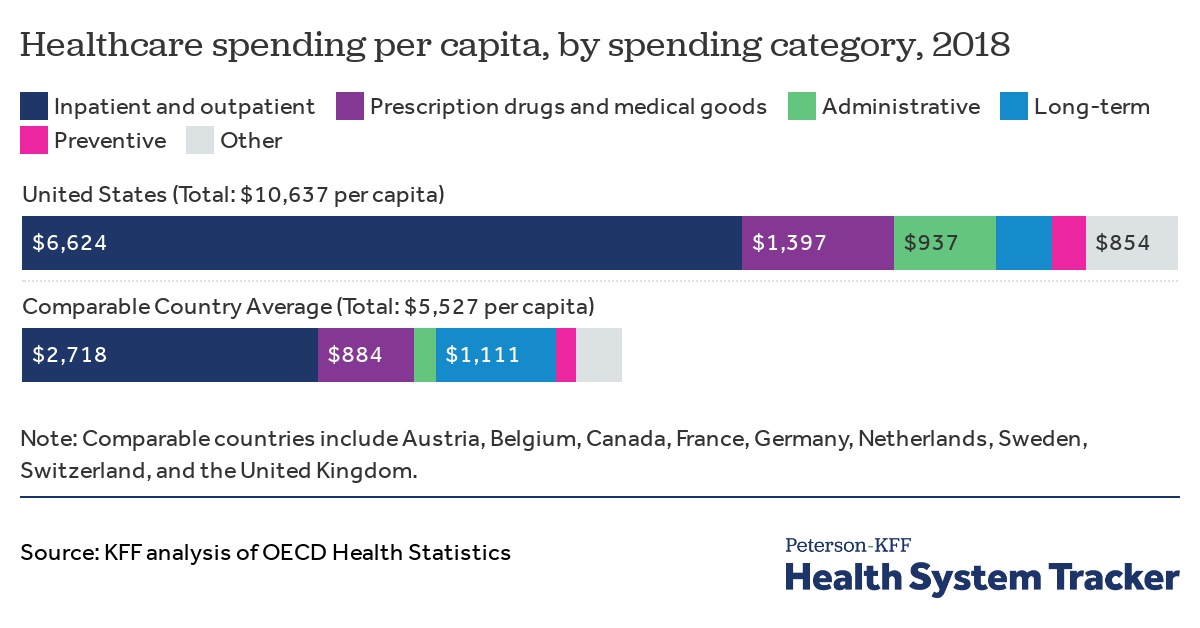 The largest category of health spending in both the U.S. and comparable countries was spending on inpatient and outpatient care, which includes payments to hospitals, clinics, and physicians for services and fees such as primary care or specialist visits, surgical care, and facility and professional fees (see Methods for more details). Americans spent $6,624 per person on inpatient and outpatient care while comparable countries spent an average of $2,718 per person, a difference of $3,906 per person. Patients in the U.S. have shorter average hospitals stays and fewer physician visits per capit­a, while many hospital procedures have been shown to have higher prices in the U.S.

Spending on health administration was over four times more per person in the U.S. than in comparable countries: $937 compared to $201 per person, respectively, a difference of $736. Administrative costs include spending on running governmental health programs and overhead from insurers but exclude administrative expenditures from healthcare providers. Roughly half (53%) of administrative spending in the U.S. is from private health insurance costs, while the remainder are from governmental health programs such as Medicaid and Medicare.

The U.S. also spent more on preventive care than peer nations – $309 compared to $175 per capita, on average, a difference of $134; activities captured in this spending category vary amongst countries, but in the U.S. it generally consists of public health activities, including preventive health programs and education for immunizations, disease detection, emergency preparedness, and more.

Spending in the “other” category includes ancillary services, and other types of care and medical goods uncaptured in the other spending categories.

The main driver of relatively high health spending in the U.S. is the cost of inpatient and outpatient care 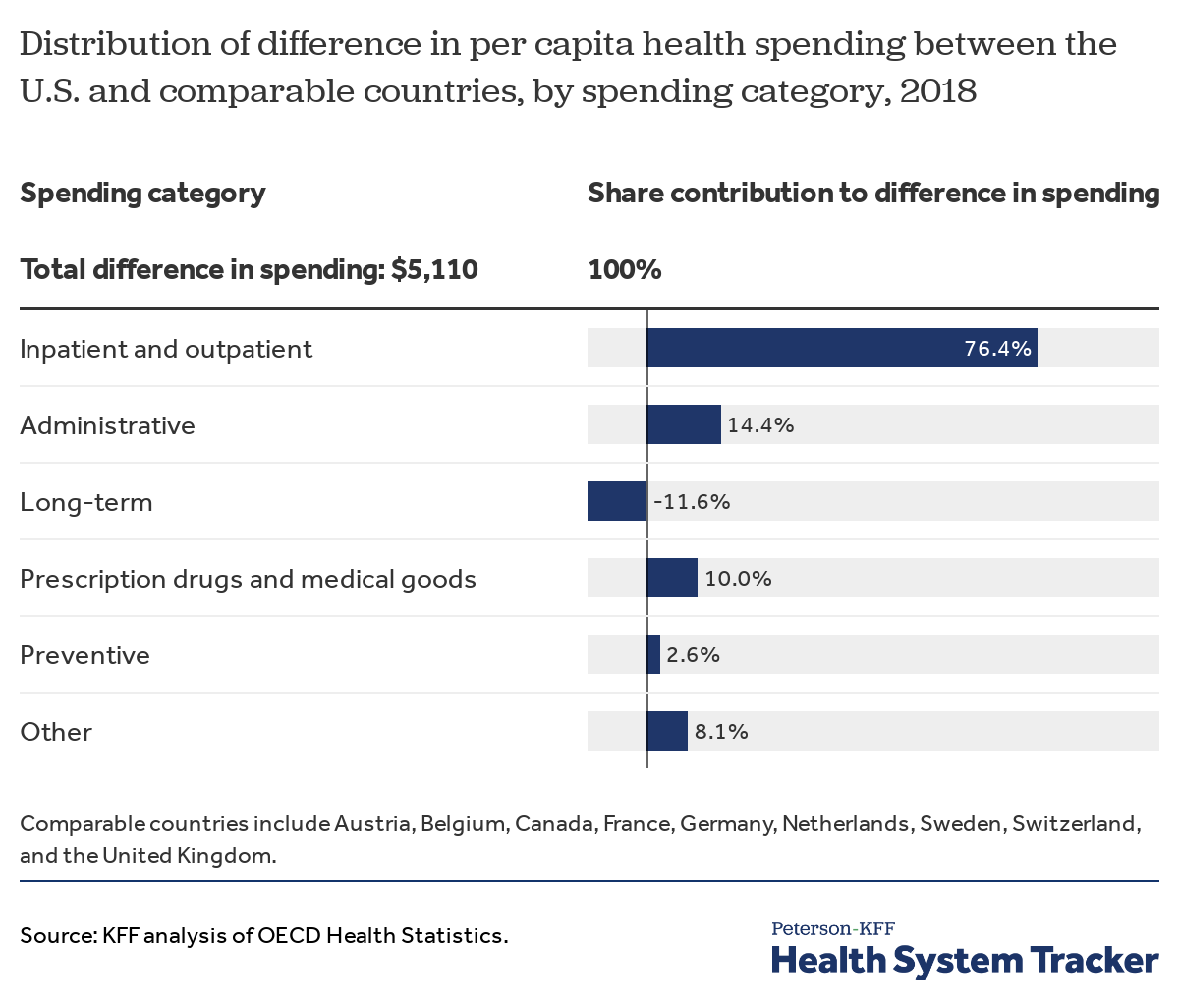 Inpatient and outpatient care represent a greater share of health spending in the U.S. compared to peer countries

Although the U.S. spends more per person on retail prescriptions drugs and medical goods, these costs represented a slightly smaller share of total spending as compared to the comparable country average in 2018 (13% and 16%, respectively).

Over the past decade, per capita health spending has grown at similar rates for the U.S. and comparable countries, but the change in dollars is significantly different 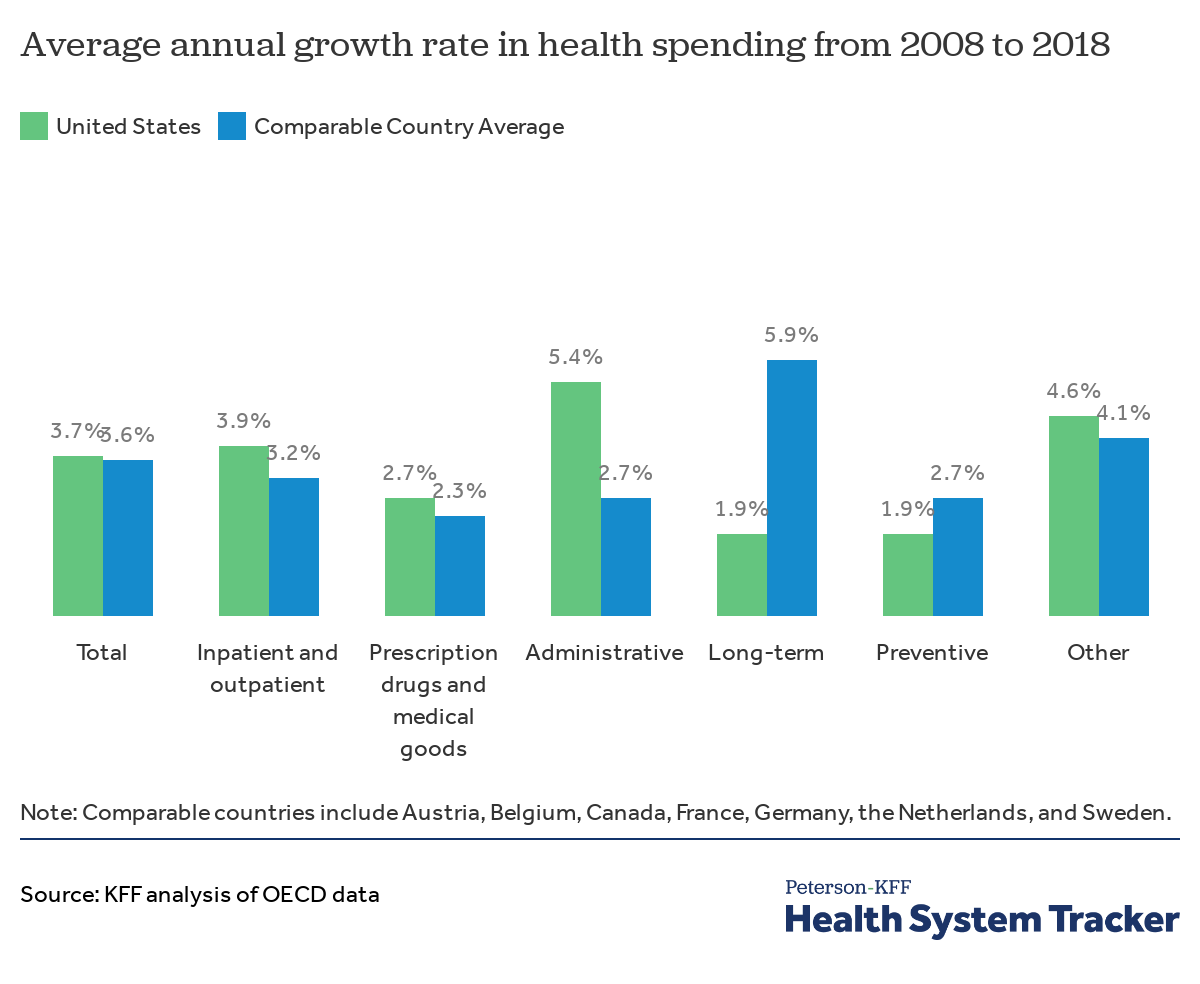 Between 2008 and 2018, health spending grew at a similar rate in both the U.S. and comparable countries (3.7% and 3.6%, respectively). However, since spending in the U.S. was significantly higher to begin with, the rate amounted to roughly twice as much in spending in dollars in the U.S. compared to comparable countries. The same is true for the growth in many specific spending categories. (This chart breaks from those presented earlier as it does not include data from Switzerland or the United Kingdom, since they did not report all spending categories in 2008. See methods.)

Notably, growth in spending on long-term care represented a far smaller share of spending growth in the U.S. versus comparable countries (1.9% vs 5.9%, respectively). Long-term care can be expensive or hard to access in the U.S. for many patients. Meanwhile, spending on administrative costs in the U.S. saw the greatest growth rate at 5.4% over this period, while administrative costs in comparable countries grew at half that rate, at 2.7%.

Political discourse on health spending often focuses on prescription drug prices and administrative costs as being the primary drivers of high health spending in the U.S. compared to other nations. Current policy proposals aim to address prescription drug pricing. Drug prices are, indeed, higher in the U.S. than in other high-income countries, but as this analysis shows, reducing drug spending alone would have a comparatively smaller effect on the gap between health costs in the U.S. and comparable countries. The biggest contributor to the difference in costs between the U.S. and peer nations is spending on inpatient and outpatient care. Yet, people in the U.S. use less care and have worse health outcomes than those in peer nations.

We analyzed health expenditure and financing data from the Organization for Economic Co-operation and Development (OECD) for 10 countries, including the U.S., in 2018. Data consisted of current expenditures on health expressed as per capita, current prices, current purchasing power parity (PPP), in U.S. dollars. Data in this analysis is rounded. Comparable country data was taken by averaging spending data from countries that have above median GDP and above median GDP per capita (Austria, Belgium, Canada, France, Germany, Netherlands, Sweden, Switzerland, and the United Kingdom). Australia and Japan were not included due to gaps in data on categories of spending for 2018. The United Kingdom and Switzerland did not have spending data on inpatient and outpatient care for 2008, and therefore were excluded from the analysis of growth rates between 2008 and 2018.

Current expenditures on health consisted of spending as a function of inpatient curative and rehabilitative care, outpatient curative and rehabilitative care, long-term care, ancillary services, medical goods, preventive care, governance and health system and financing administration, and other health services. In our analysis, “other” consists of other health services, ancillary services, and uncategorized spending, which is the difference between the sum of all categories and the total spending. Inpatient and outpatient care have been combined due to differences in when the same service may be performed inpatient versus outpatient depending on the country. The OECD defines outpatient care as care that “comprises medical and ancillary services delivered to a patient who is not formally admitted to a facility and does not stay overnight.” Long-term care services may be provided by hospitals, nursing homes, doctors’ offices, homes or other places. Medical goods consist of over-the-counter drugs, prescription drugs, other pharmaceuticals used for clinical purposes, and goods used for clinical purposes, such as hearing aids, glasses, prosthetics, and medical technical devices.