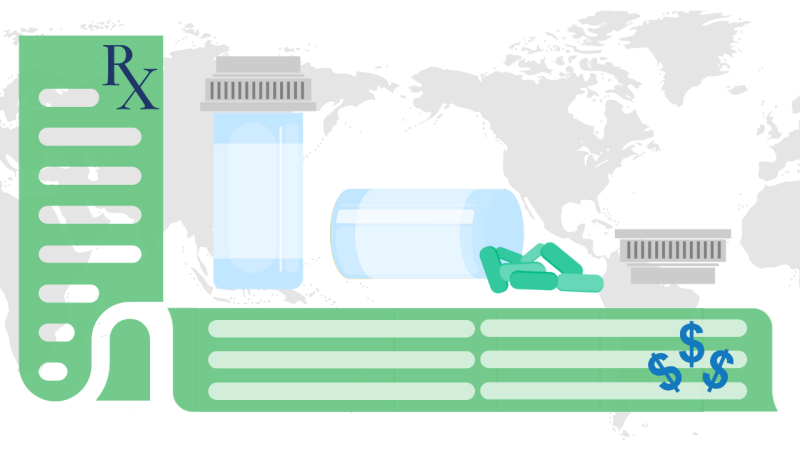 More than three in four adults in the United States think the costs of prescription drugs are unaffordable and nearly one in three adults say they haven’t taken their medications as prescribed due to costs. In 2019, the U.S. spent more than $1,000 per person on prescribed medicines, an amount higher than any peer nation.

This chart collection examines what we know about prescription drug spending and use in the U.S. and comparably large and wealthy countries, using data from the Organization for Economic Cooperation and Development (OECD).

Prescription drug spending in the U.S. is about double that of many peer nations 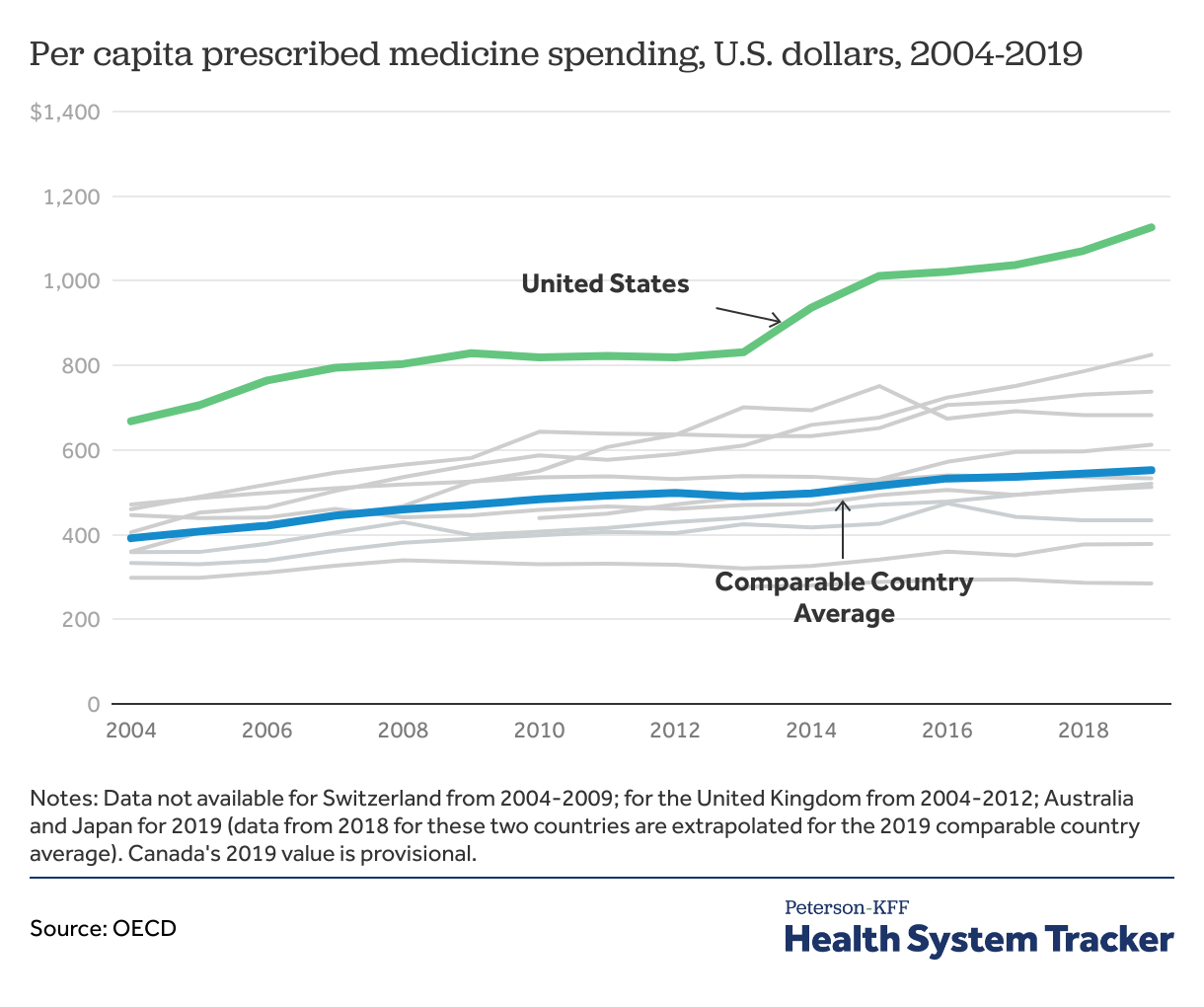 In 2019 (the latest year with internationally comparable data from the OECD), the U.S. spent $1,126 per capita on prescribed medicines, while comparable countries spent $552 on average. This includes spending from insurers and out-of-pocket costs from patients for prescription drugs filled at the pharmacy.

Per capita prescribed medicine spending in the U.S. grew by 69% from 2004 to 2019, compared to 41% in comparable countries, on average. During this period growth rates fluctuated, with modest growth in U.S. from 2006 to 2013, and sharp increases in growth in 2014 and 2015 which were largely driven by the introduction of new, highly priced treatments. 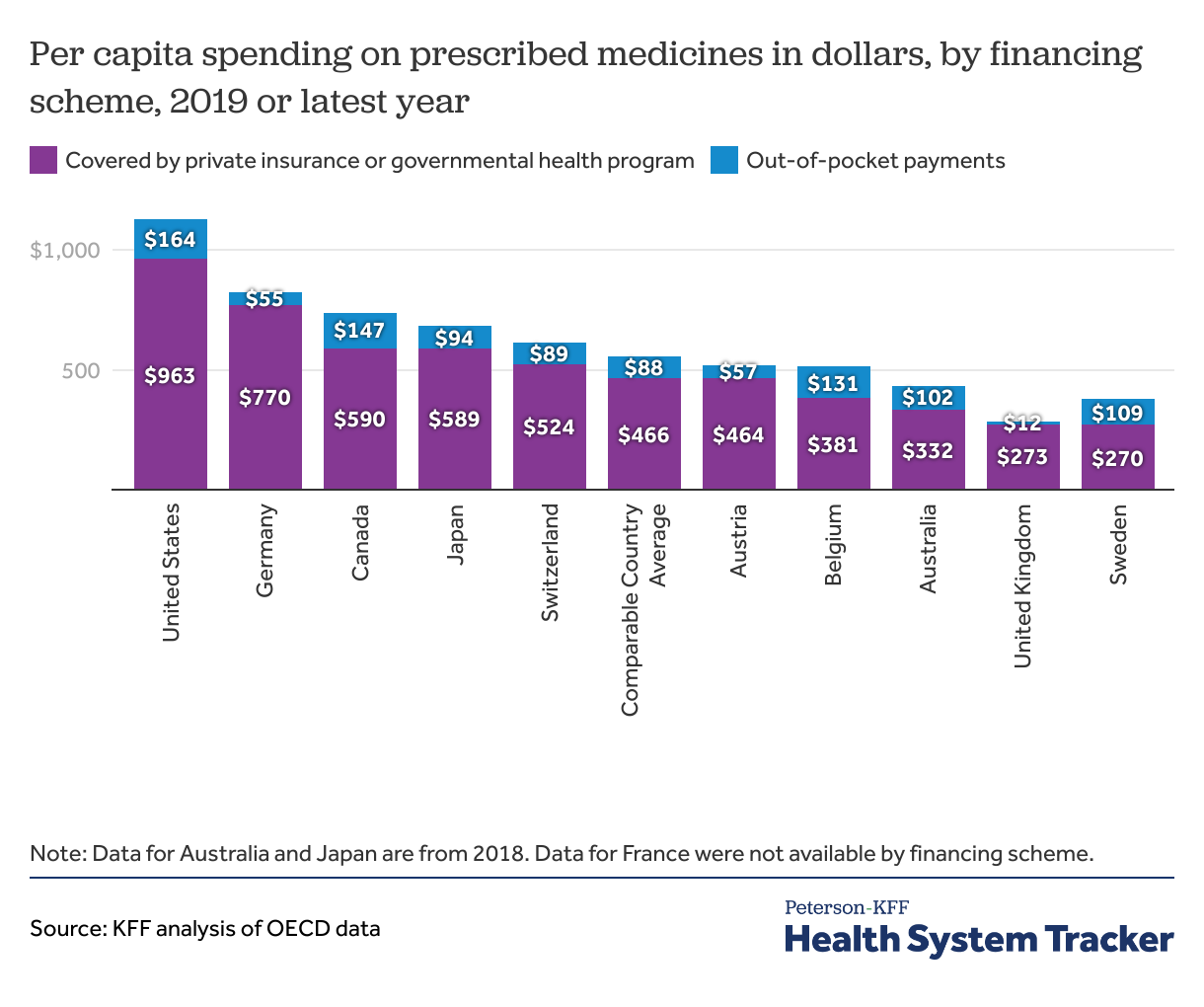 In the U.S., per capita insurer payments and out-of-pocket spending on prescribed medicines ($963 and $164, respectively in 2019) are both higher than in any other comparable country. Private and public insurance programs cover a similar share of prescription medicine spending in the U.S. compared to peer nations, on average (85% and 84%, respectively). However, the steep costs in the U.S. still contribute to high U.S. healthcare spending and are passed onto Americans in the form of higher premiums and taxpayer-funded public programs. Given that retail drugs account for 18% of total health spending in employer plans, changes in prices or use of drugs can impact employer costs, employee premiums, and patient costs.

Prescription drugs cost more in the U.S. than comparable countries 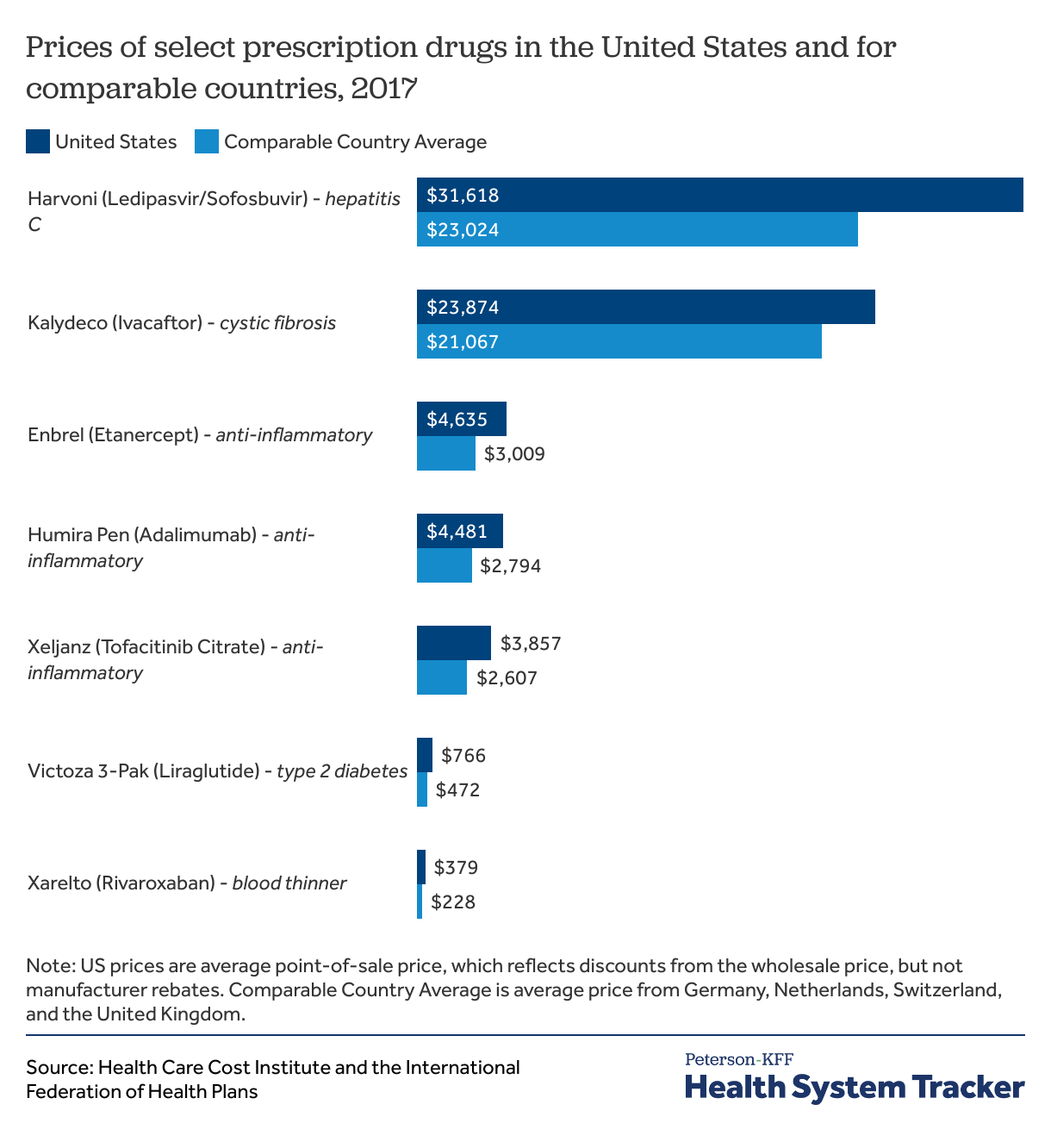 Countries’ prescription drug policies can vary based on a number of factors, including the regulation or benchmarking of prescription drug prices, the numbers of and types of payers, the role of pharmaceutical benefit managers, patent protections of drugs, and the availability and prices of generic or biosimilar alternatives. In the U.S., drugs with no competitors can be more expensive than in other countries, in part because the U.S. does not directly regulate or negotiate the price of drugs. When generics or biosimilars become available, these lower-cost alternatives can offer less expensive treatment options to patients and payers.

Generic drugs account for the majority of drugs dispensed in the U.S., but only one-fifth of the spending 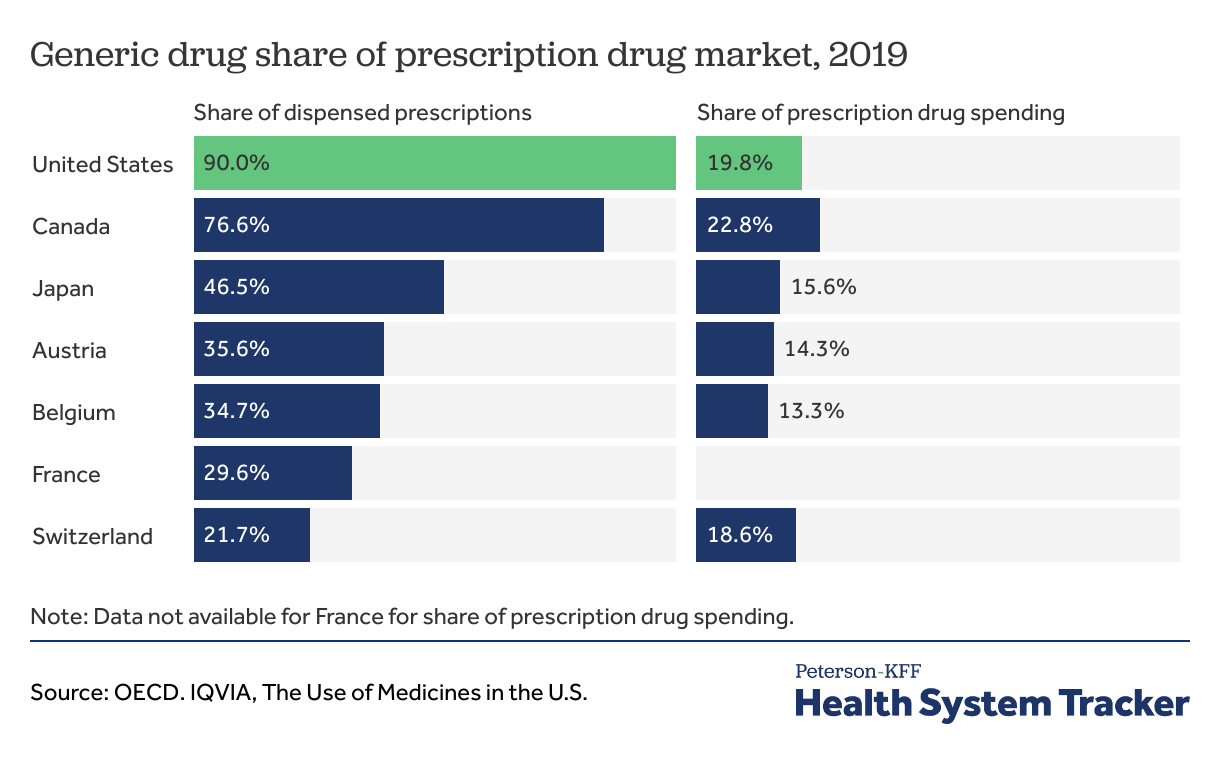 Substituting generics for brand name drugs can reduce health care spending. International comparisons of the share of the prescription drug market that is made up of generic drugs are a challenge due to differences in data collection. While most countries, including the United States, categorize the “share of dispensed prescriptions” attributable to generics by the number of prescriptions, some comparable countries use daily doses. Nevertheless, this data provides an insight into the use of generics and relative spending. The data shows that while a vast majority (90%) of dispensed prescriptions in the U.S. are for generic drugs, spending on these drugs represents a smaller fraction of spending (19.8%). While prices of brand-name drugs have generally increased, prices of generics have largely gone down.

The share of the population taking prescription drugs is somewhat higher in the U.S. than in most peer nations 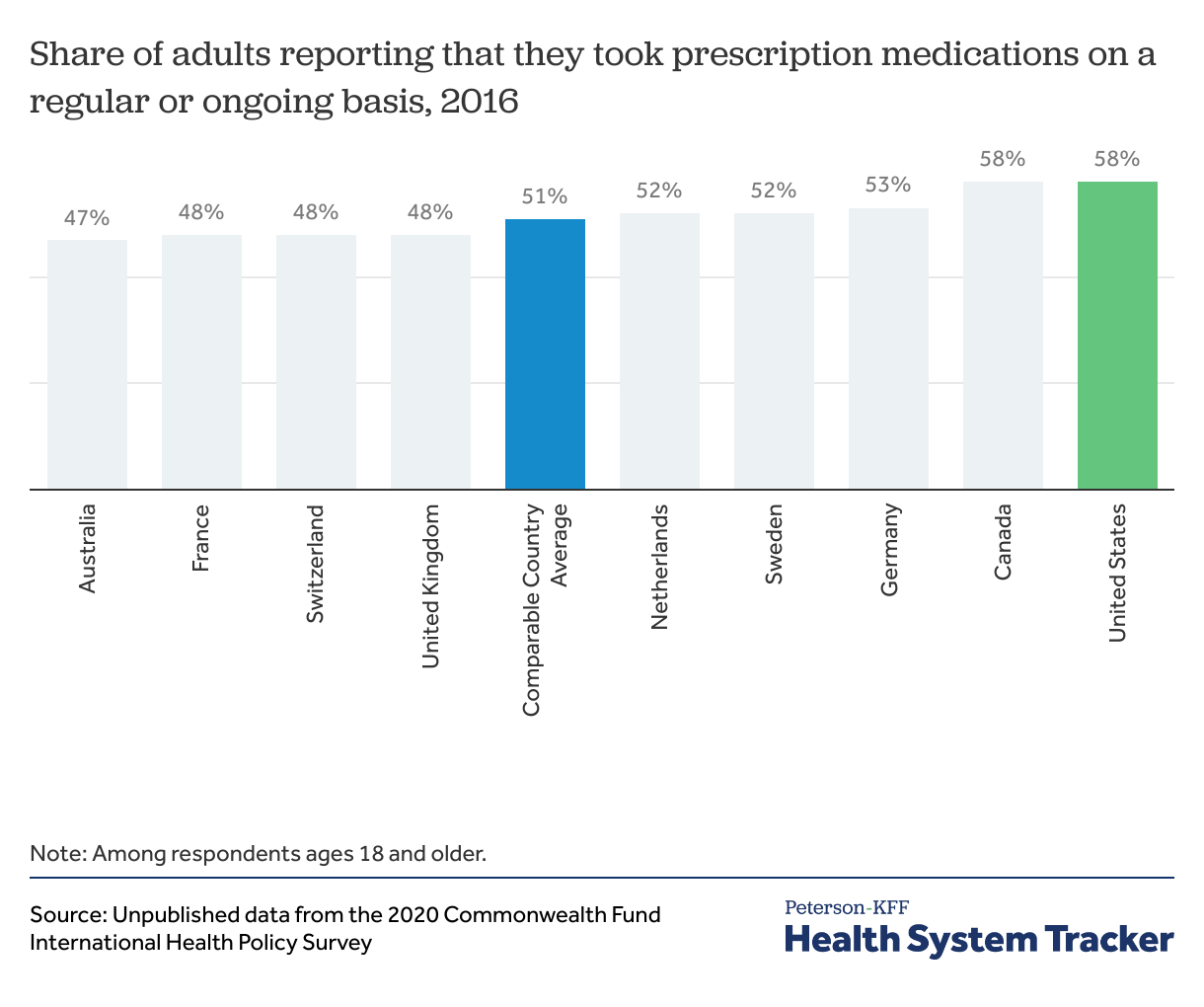 Both price and use affect the cost of any good or service, and the same holds for prescription drugs. Data on the use of prescription drugs can be hard to capture and compare across countries. Available survey data finds that over half of people in the U.S. (58%) report taking prescription drugs on a regular or on-going basis, which is similar to the share in comparable countries (51% on average).