How do U.S. healthcare resources compare to other countries?

This chart collection looks at the availability of hospital resources and healthcare professionals in the United States and similarly wealthy countries. A related chart collection examines how the U.S.’s healthcare resources factor into the nation’s preparedness for the coronavirus pandemic.

The availability of healthcare resources (e.g. medical professionals, technology, and other infrastructure) can affect the functioning of a health system in a variety of ways, including access to care, prices of services, and disaster preparedness. In a similar analysis, for example, we have examined how healthcare resources vary within the U.S. to understand how prepared our health system was to handle a surge of COVID-19 patients.

Overall, this chart collection shows that, on a per capita basis, the U.S. has more nurses but fewer physicians, hospitals, and acute care beds than comparable countries.

The U.S. has fewer acute care hospital beds per capita than many comparably wealthy countries 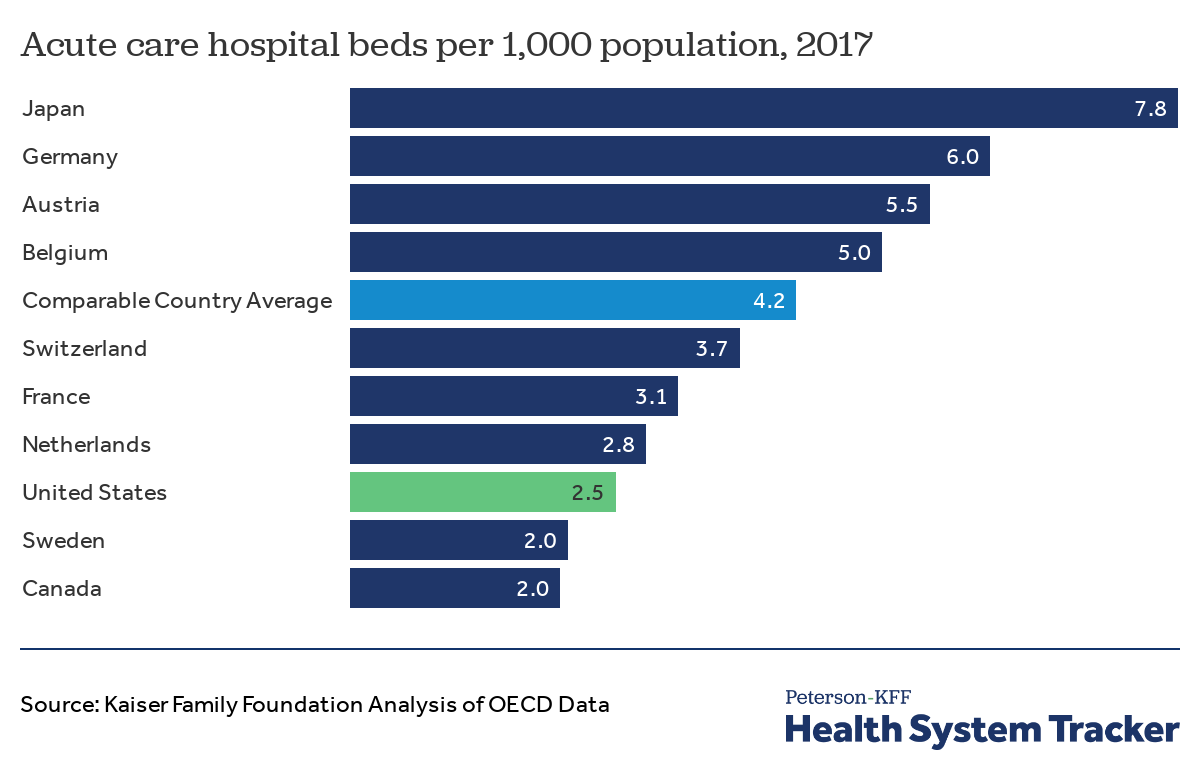 Hospital density is decreasing at a faster rate in the U.S. than in comparable countries 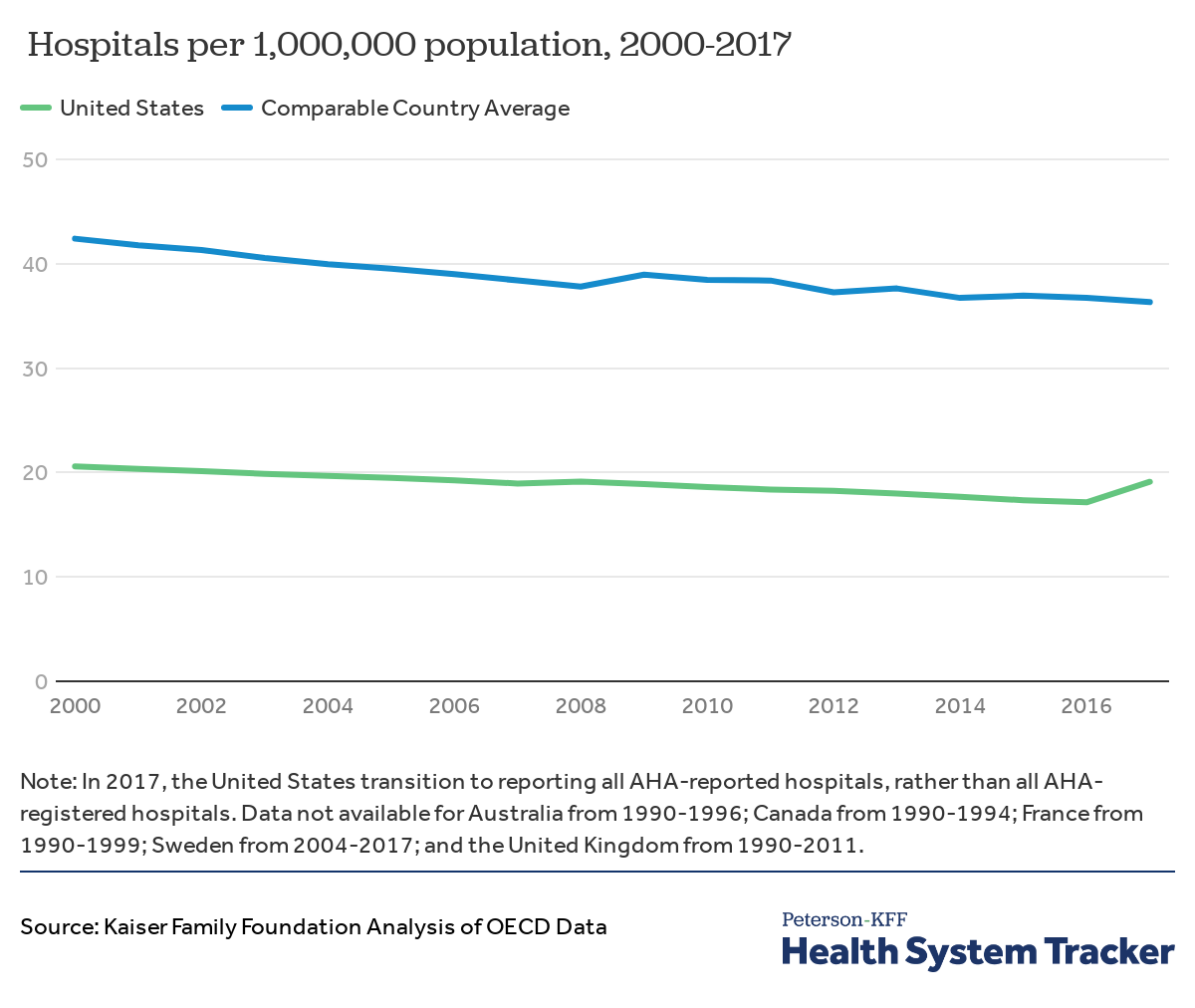 In the past 17 years, the number of hospitals per capita has decreased in both the U.S. and similar countries, although the average density of hospitals in the U.S. has decreased more rapidly. From 1990 to 2017, the U.S. hospital density has decreased by about 28%, whereas the comparable country average has dropped by about 13%. In the U.S, fewer hospitals and higher rates of hospital consolidation are associated with higher prices but not accompanying improvements in quality of care. Additionally, the coronavirus pandemic has highlighted that the availability of hospitals and hospitals beds ultimately contributes to a health system’s ability to treat patients and handle surges in hospital admissions.

There are fewer physicians per capita in the U.S. than there are in most comparable countries 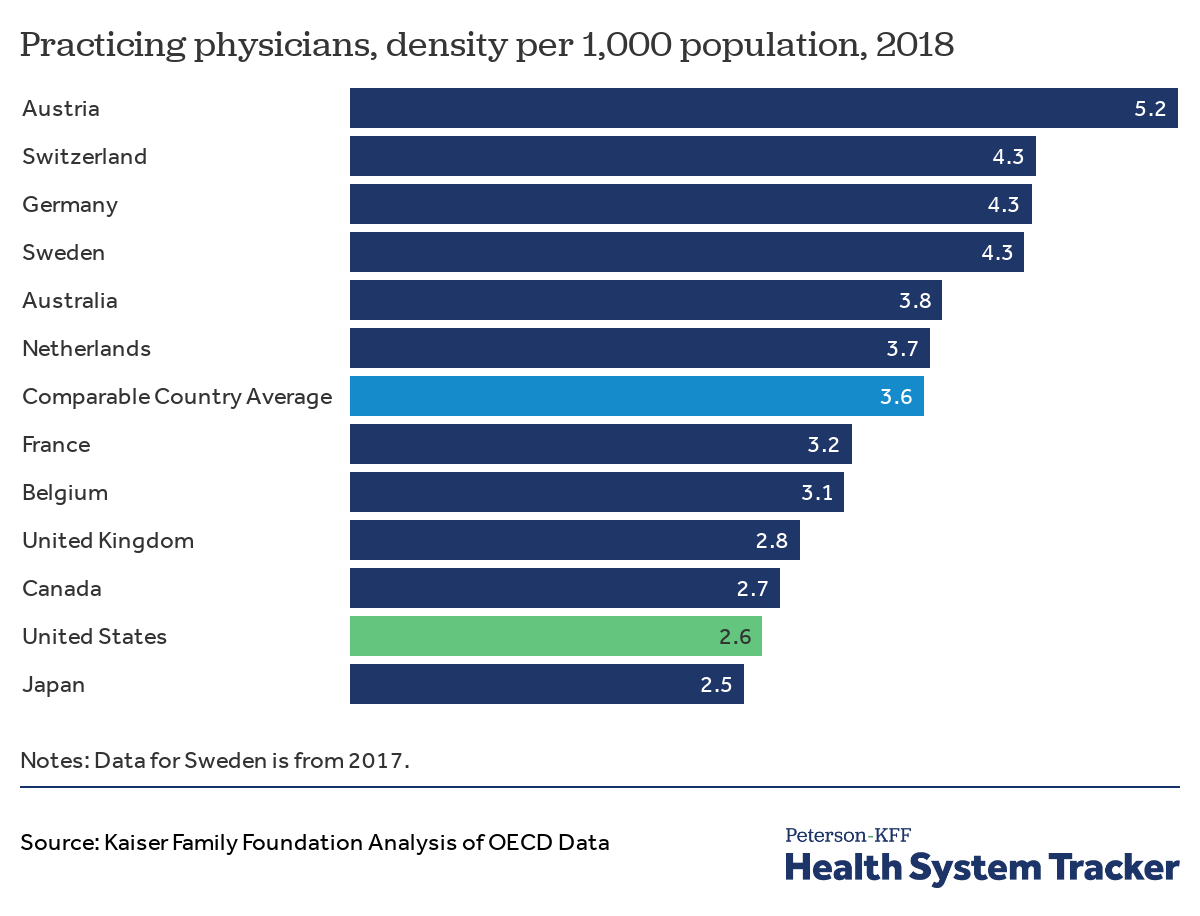 Some attention has been given recently to a potential doctor shortage in the U.S., particularly during the onset of the coronavirus pandemic, during which certain hospitals were understaffed to treat the sudden surge in patients. The U.S. has fewer doctors per capita than comparable countries, except for Japan.

The U.S. consistently has fewer physicians than comparable countries over time 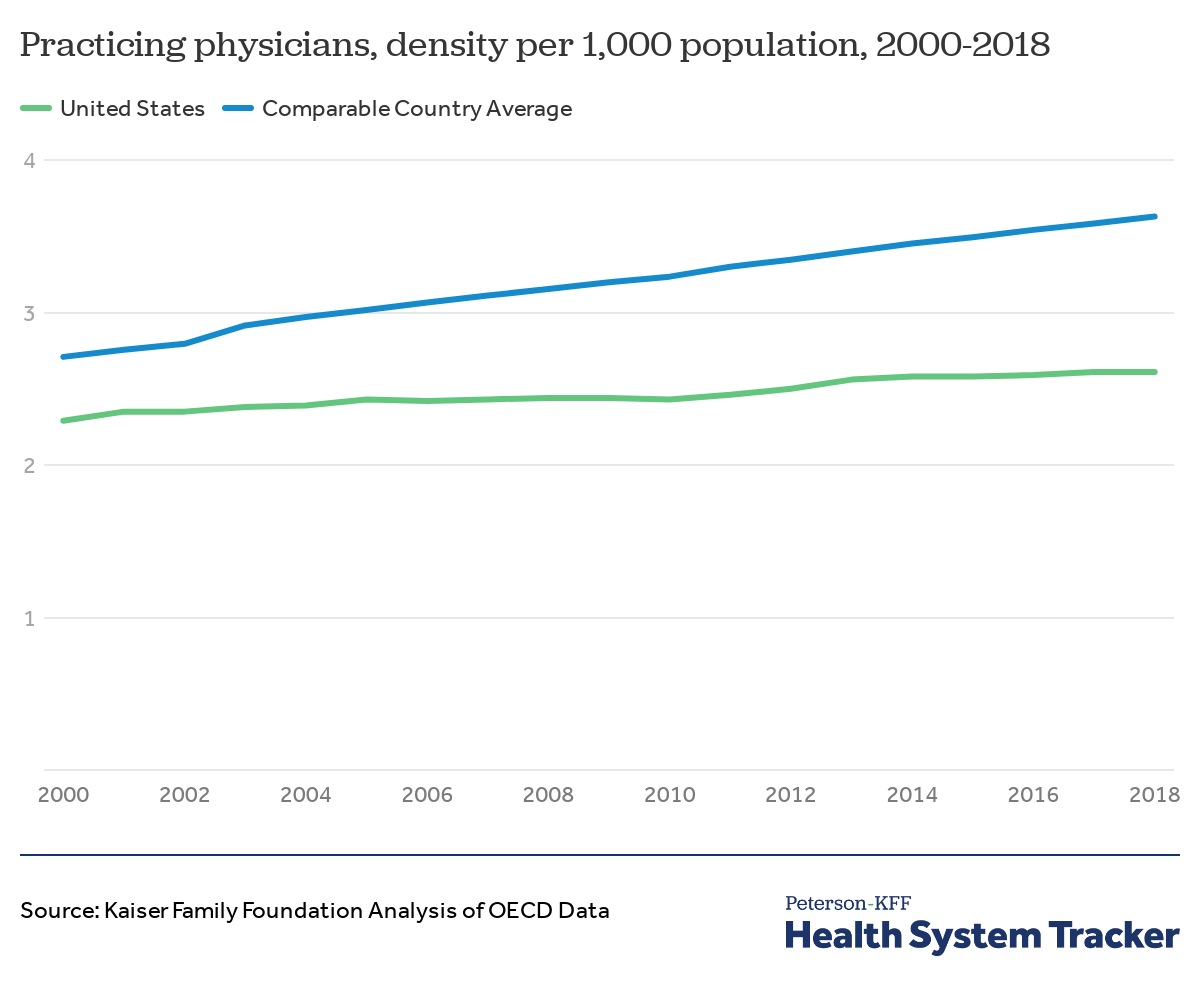 The U.S. has the highest percentage of specialists among comparable countries 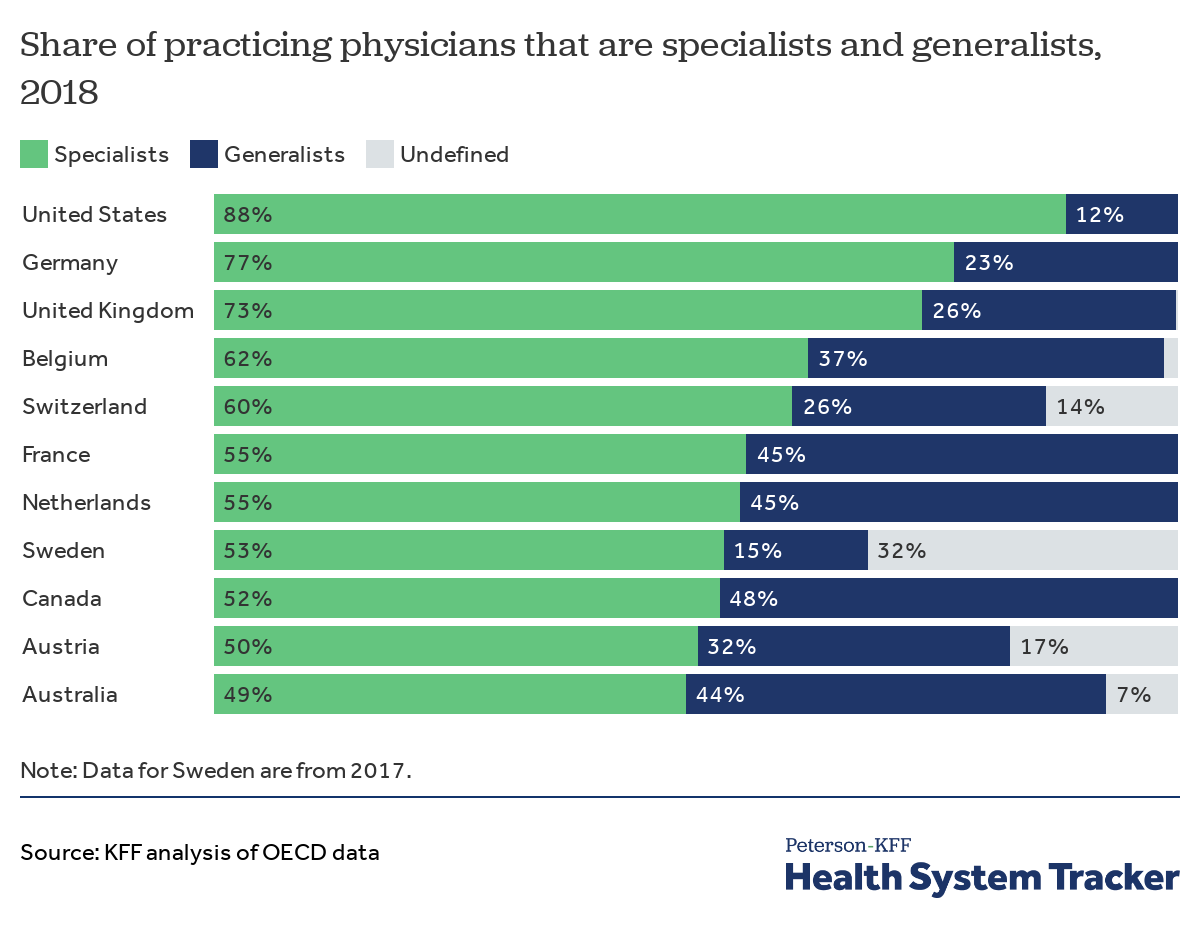 The U.S. has fewer psychologists and psychiatrists working in mental health than most comparable countries 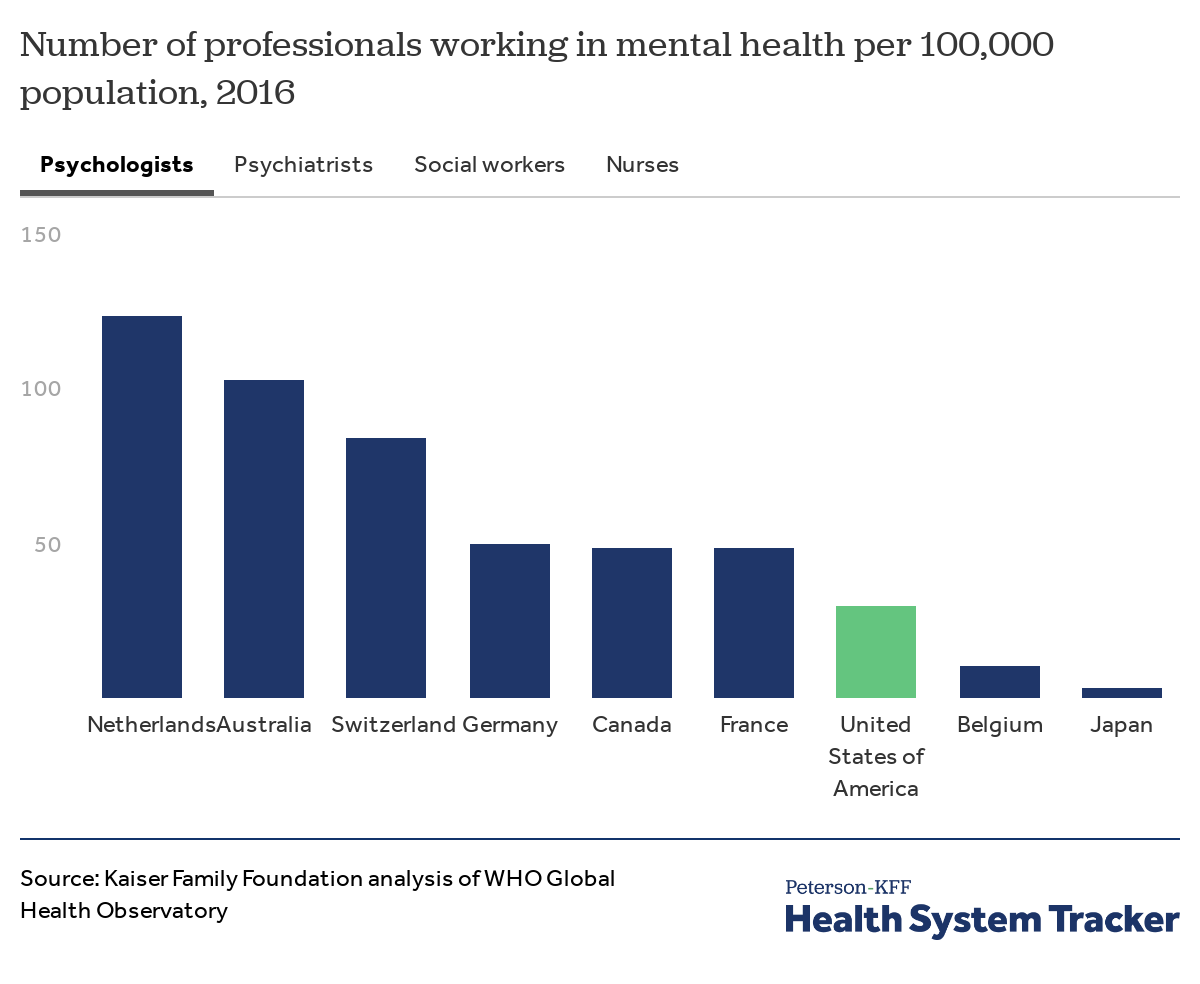 The numbers of psychiatrists, psychologists, and nurses per 100,000 population in the U.S. working in mental health are lower than the comparable country average. The rate of social workers per 100,000 population working in mental health in the U.S. is second to Canada, and more than other comparable countries where data is available.

Compared to similar countries, the U.S. has more nurses licensed to practice per capita 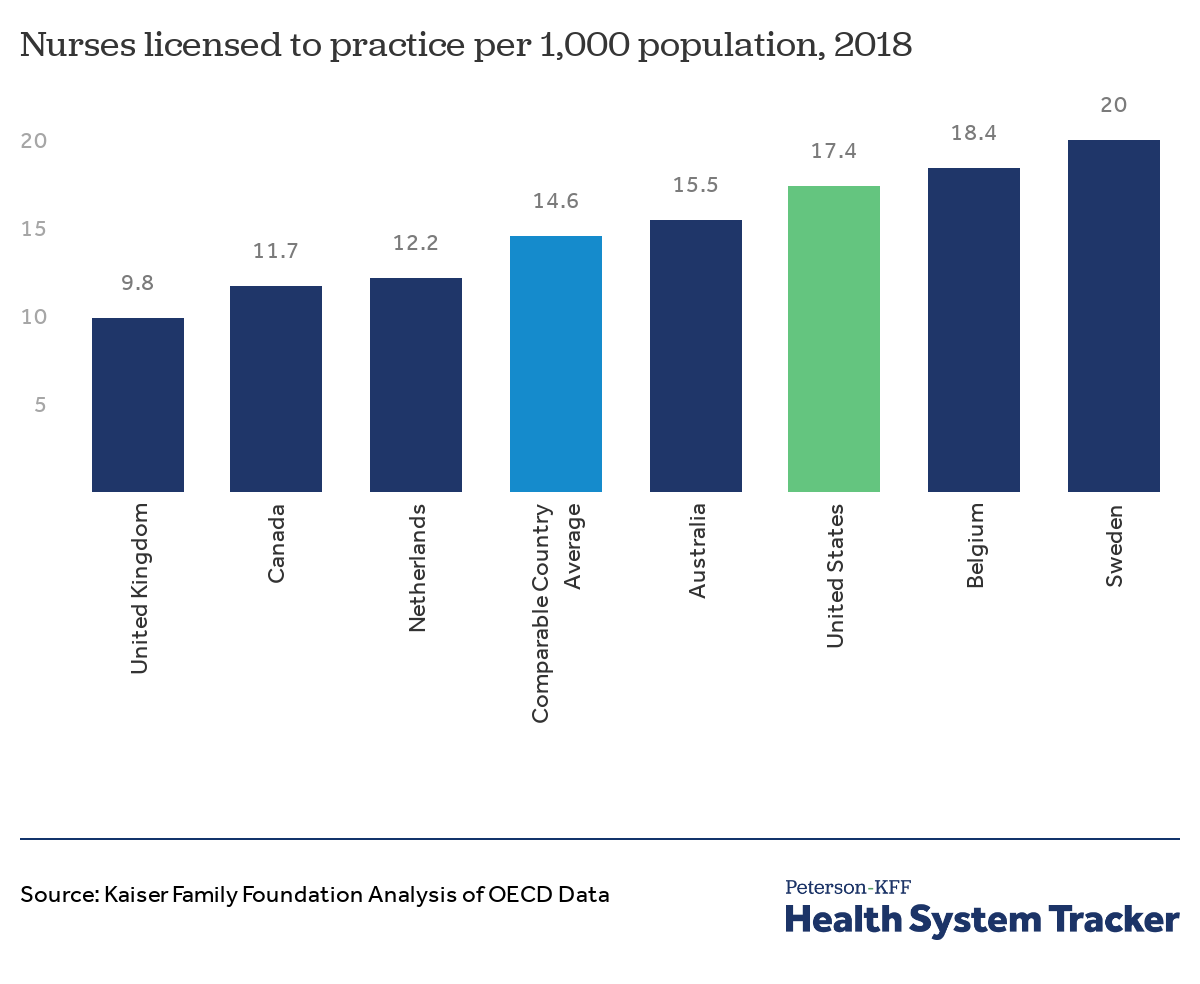 Since 2000, the number of licensed nurses per capita has grown faster than peer countries 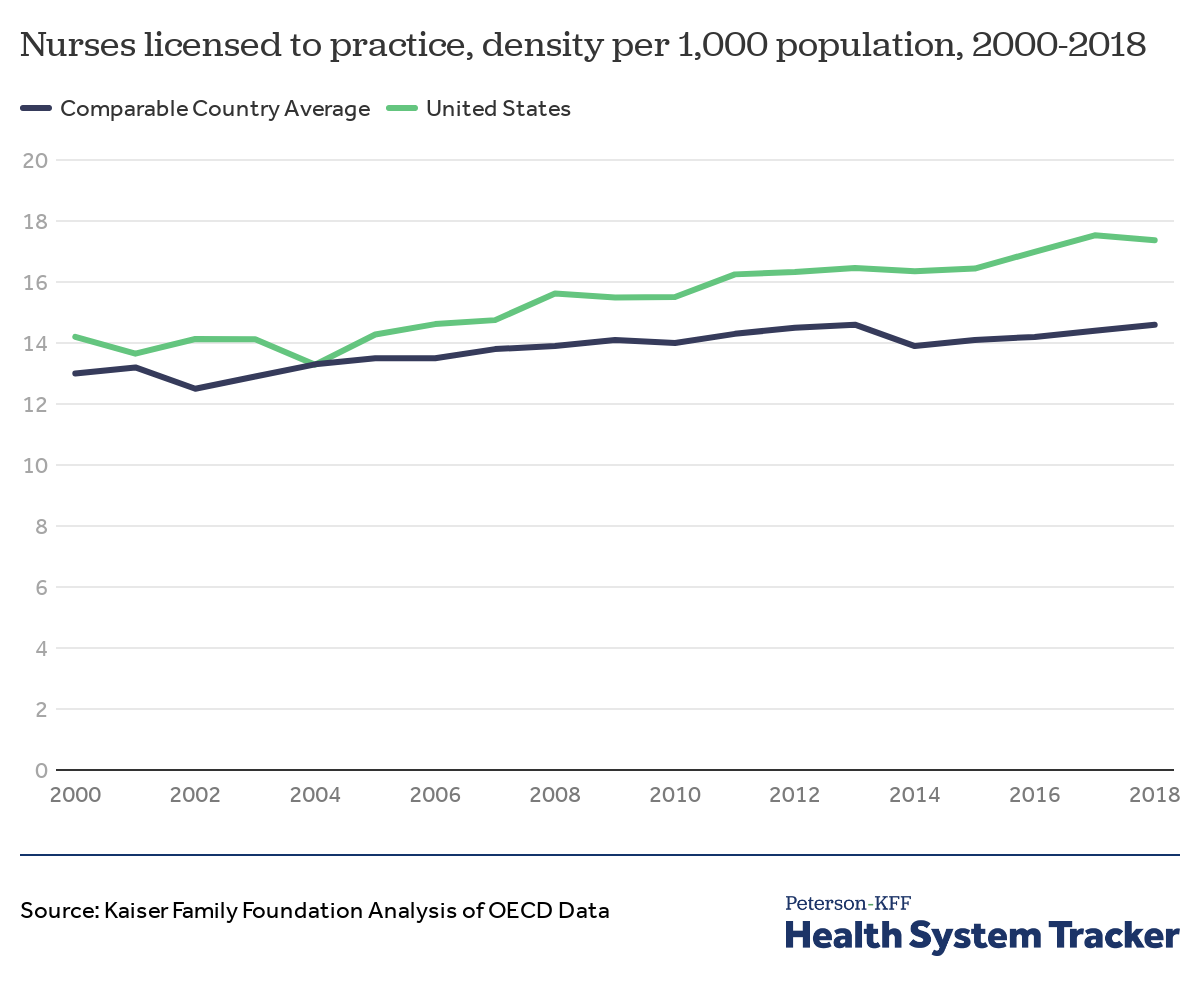 Both the U.S. and comparably wealthy OECD countries have seen growth in the number of nurses per capita since the year 2000. However, the U.S. has grown faster, increasing by about 22% from 2000 to 2018, as opposed to about 12% growth for comparable countries.

On average, the U.S. has around two times as many MRI machines per capita than comparable countries 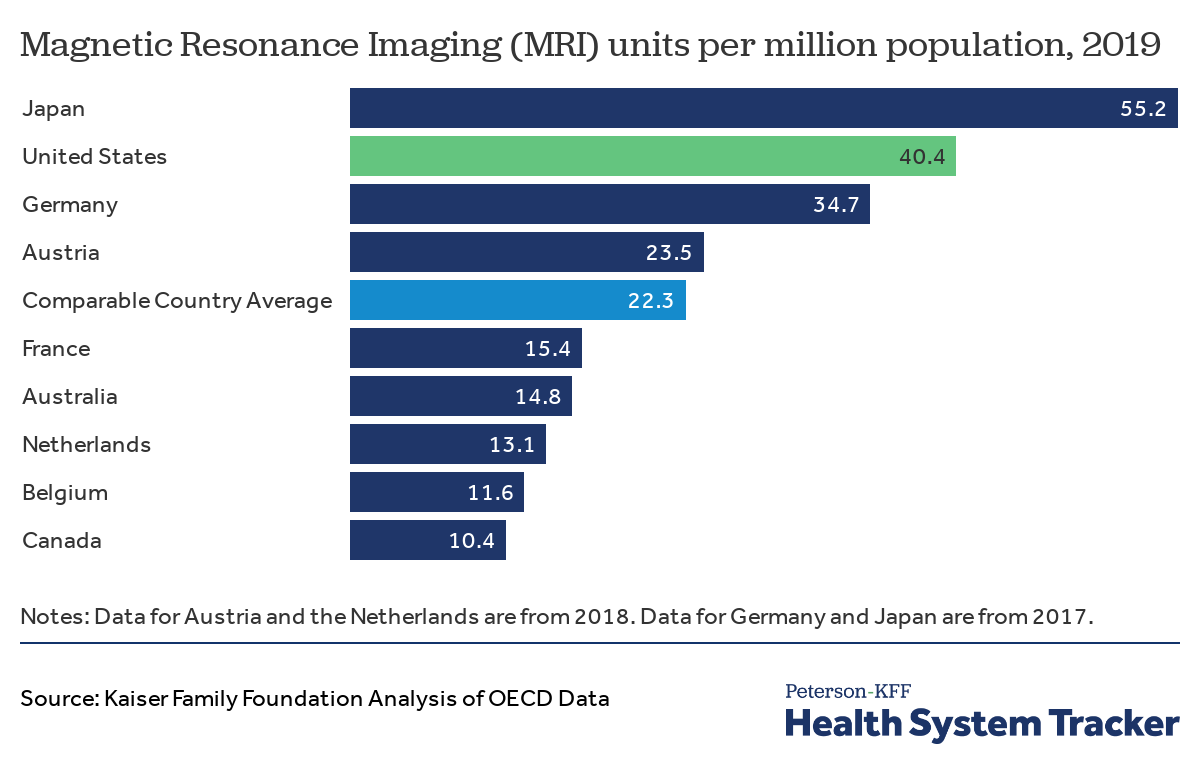 Magnetic Resonance Imaging (MRI) machines are an example of technology that is used for increasing the accuracy of diagnosing medical conditions, though they are also associated with higher cost. While the full scope of resources a nation has can be difficult to measure, the OECD has data on the availability of MRI machines for certain countries.

The U.S. has 40.4 MRI machines per million people, which is substantially more than most comparably wealthy countries except for Japan (55.2). The comparable country average is 22.3 MRI machines per million people. However, it should be noted that more MRI machines are not always associated with higher usage. For example, per OECD data, Austria, Germany and France all conduct similar numbers of MRI exams per capita when compared to the United States, despite having fewer machines. 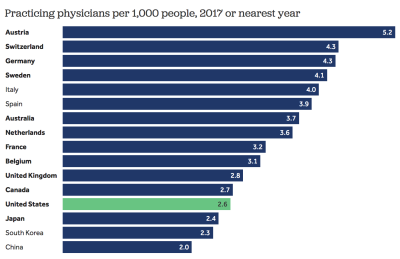