As the new coronavirus spreads within the United States, questions have arisen over the potential costs people may face if they become severely ill and need treatment. To address concerns over costs associated with COVID-19, Vice President Pence met with a group of large private insurers, who agreed to waive copayments and deductibles for COVID-19 tests. However, America’s Health Insurance Plans (AHIP) clarified that the out-of-pocket costs for treatment – such as hospitalizations for more serious cases – would not be waived, meaning people with private insurance who face deductibles could be on the hook for large costs.

In this brief, we examine the potential cost to employer health plans and their enrollees of COVID-19 treatment by looking at typical spending for hospital admissions for pneumonia. We use a sample of the IBM MarketScan Commercial Claims and Encounters claims database, which includes claims from 18 million people enrolled in large employer plans in 2018. Specifically, we look at the costs of admissions for people with pneumonia, including three diagnosis-related groups (DRGs) for pneumonia without complications or comorbidity, with complications or comorbidity, and with major complications or comorbidity. These DRGs include pneumonia caused by similar (SARS-associated) coronavirus, as well as other viruses and bacteria. We also looked at two DRGs for respiratory system diagnoses requiring ventilator support. DRGs are groups of similar diagnoses for which the same level of hospital resources are generally required. (It is important to note that at this time, there are no curative treatments for the new coronavirus infection itself; rather, treatment addresses the complications from COVID-19-related illnesses). Our sample is limited to people under age 65.

Total costs of admissions for pneumonia

Beginning with the total cost of treatment, paid for by a combination of the employer plan and the employee’s out-of-pocket costs, we find that the average cost of an admission for pneumonia with major complications and comorbidities is $20,292 in 2018. However, costs vary greatly across the country, with admissions for pneumonia with major complications or comorbidities ranging from $11,533 (25th percentile) to $24,178 (75th percentile).

The cost of inpatient admissions for COVID-19 treatment could top $20,000 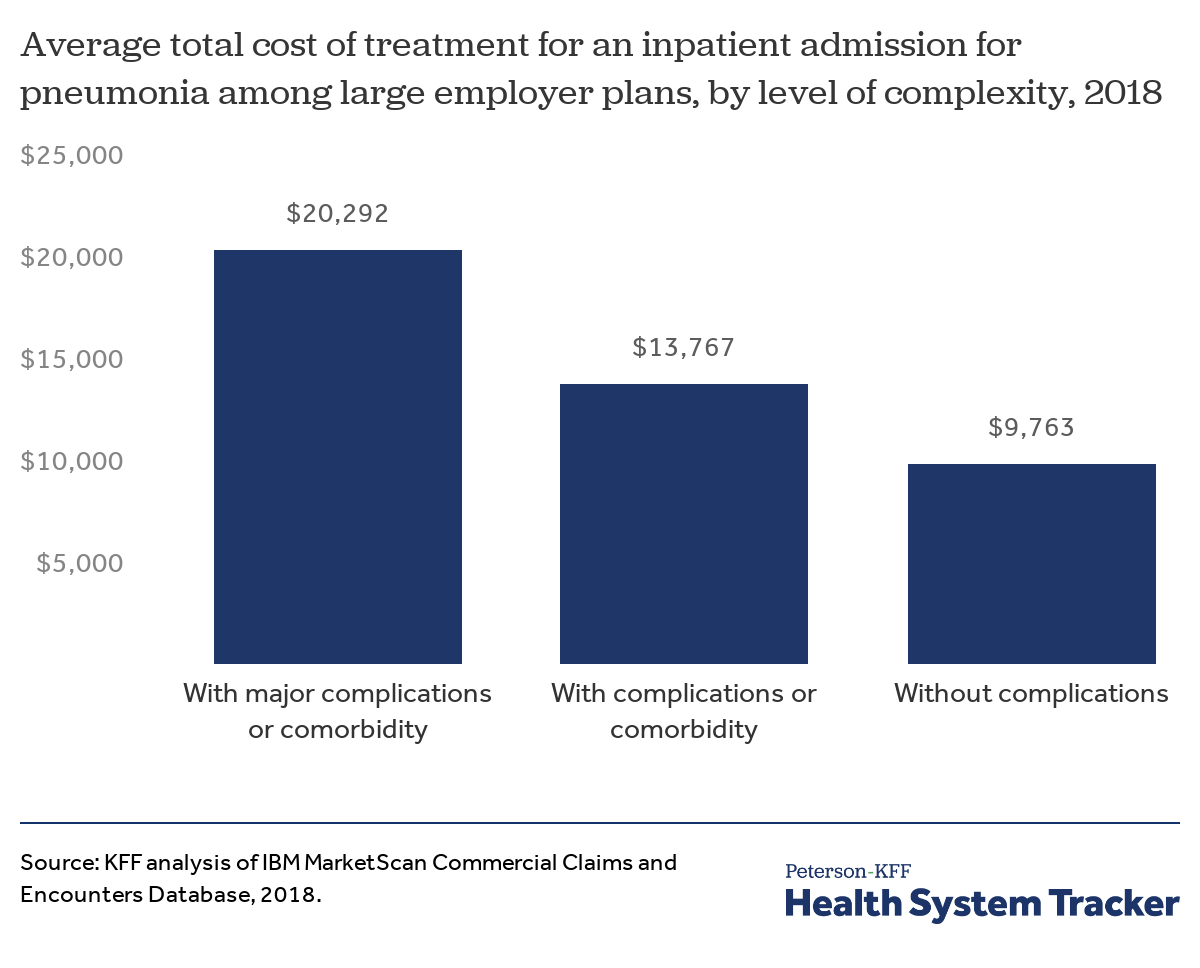 Hospital stays are longer when ventilator support is required 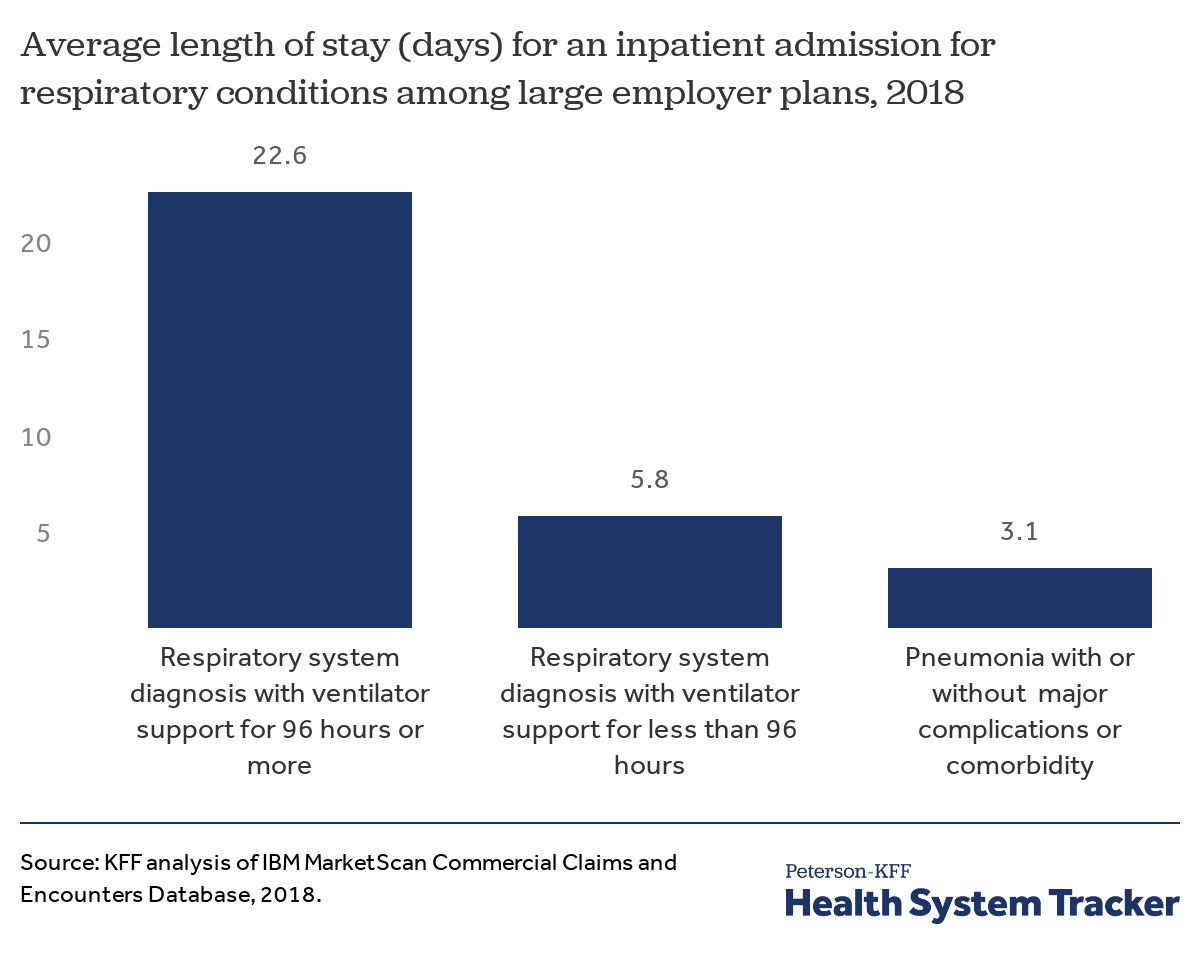 Reports from China indicate the average length of stay for a patient diagnosed with coronavirus was around 11 to 12 days. However, it is important to keep in mind that length of hospital stays vary between countries even under normal circumstances, so this may not be translatable to the U.S. In one study from China, about 2.3% of hospitalized COVID-19 patients received invasive mechanical ventilation.

Hospital stays are more expensive when ventilator support is required 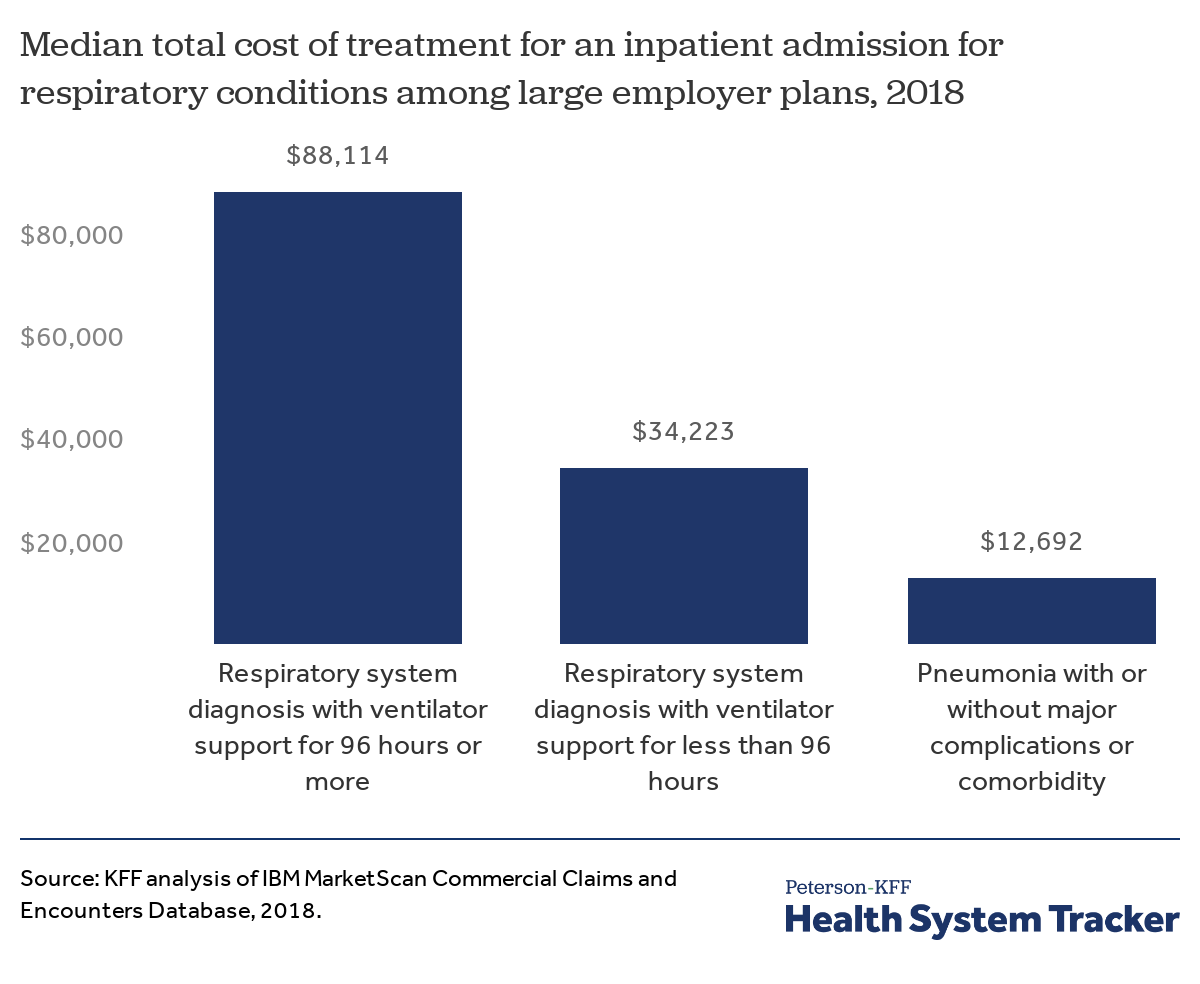 There is also considerable variation in the cost of admissions for respiratory conditions. For patients who require ventilator support, the combination of longer stays and higher intensity treatments results in higher average spending. The median total cost of an admission for a respiratory condition requiring 96 hours or more of ventilation is $88,114 dollars, compared to $34,225 for an admission requiring less than 96 hours of ventilation.

The charts above show the total costs for admissions, including both the amount paid by insurance and the amount paid out-of-pocket. People with employer and other private coverage often face a deductible for hospital stays, which is the amount patients must pay before their insurance begins covering the cost of certain services. Across people with employer-sponsored coverage, 82% of covered workers had a deductible, with 55% having a deductible of over $1,000. On average, across people with and without deductibles, the typical deductible in employer sponsored plans is $1,396. Aside from deductibles, plans may charge other forms of cost-sharing for hospitalizations, such as copays (fixed dollar amounts) and coinsurance (a percent of the allowed charges) as well. The chart below examines total out-of-pocket costs, including deductibles, copayments, and coinsurance.

People with employer coverage who are admitted for COVID-19 treatment could face out-of-pocket costs exceeding $1,300 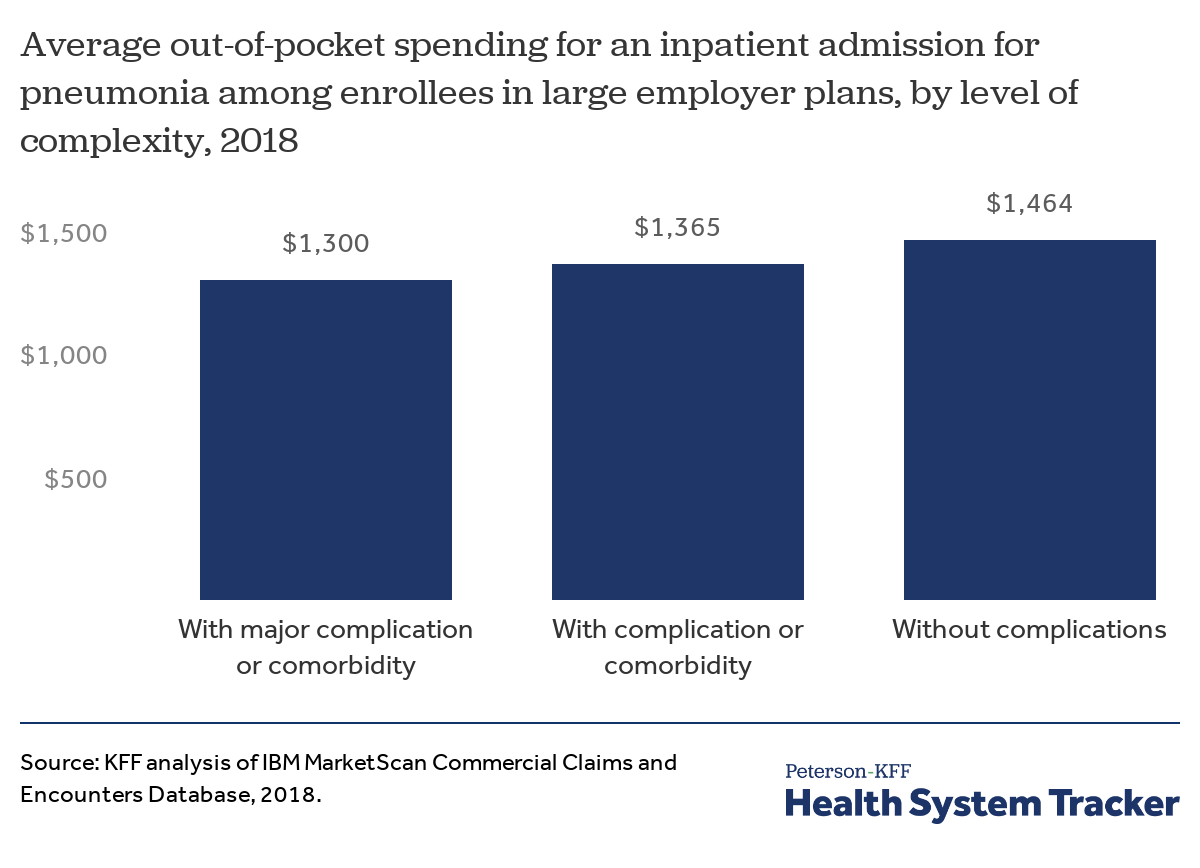 There are several reasons to believe out-of-pocket costs could be even higher during this outbreak than this analysis indicates:

First, many patients will have higher deductibles, so their out-of-pocket exposure is largely a function of their plan design. The 75th percentile for out-of-pocket costs for pneumonia (regardless of severity) was just over $2,000 in 2018. This analysis is based on claims from large employer plans, which tend to be the most generous private plans. People with private coverage through small businesses and the individual market tend to face higher deductibles.

Second, the pandemic is emerging early in the calendar year, meaning that many people have not yet accrued much health spending to satisfy their deductibles. Deductible and out-of-pocket spending is concentrated early in the year, particularly January through March. On average, employee out-of-pocket spending does not reach the typical employer plan deductible until mid-to-late May. In a normal year, many enrollees never meet their deductible, though it is possible more people will if the coronavirus pandemic leads to greater numbers of hospitalizations.

Third, these figures do not include balance billing, which is when an out-of-network provider sends an additional bill directly to the patient for an amount not covered by the health plan. Patients often receive these surprise medical bills for care, even when they go to in-network hospitals. Some large health insurance companies have assured the public they will not charge higher cost-sharing for people who inadvertently go out-of-network, but only health care providers (such as hospital and physician groups) would be in a position to halt balance bills. Prior to the COVID-19 pandemic, Congress had considered bipartisan legislation to address surprise billing, but had been met by resistance from both health care providers and insurers (more background is here).

Given concerns of surprise billing for COVID-19 treatment, we examined the incidence of out-of-network charges for in-network admissions related to pneumonia. 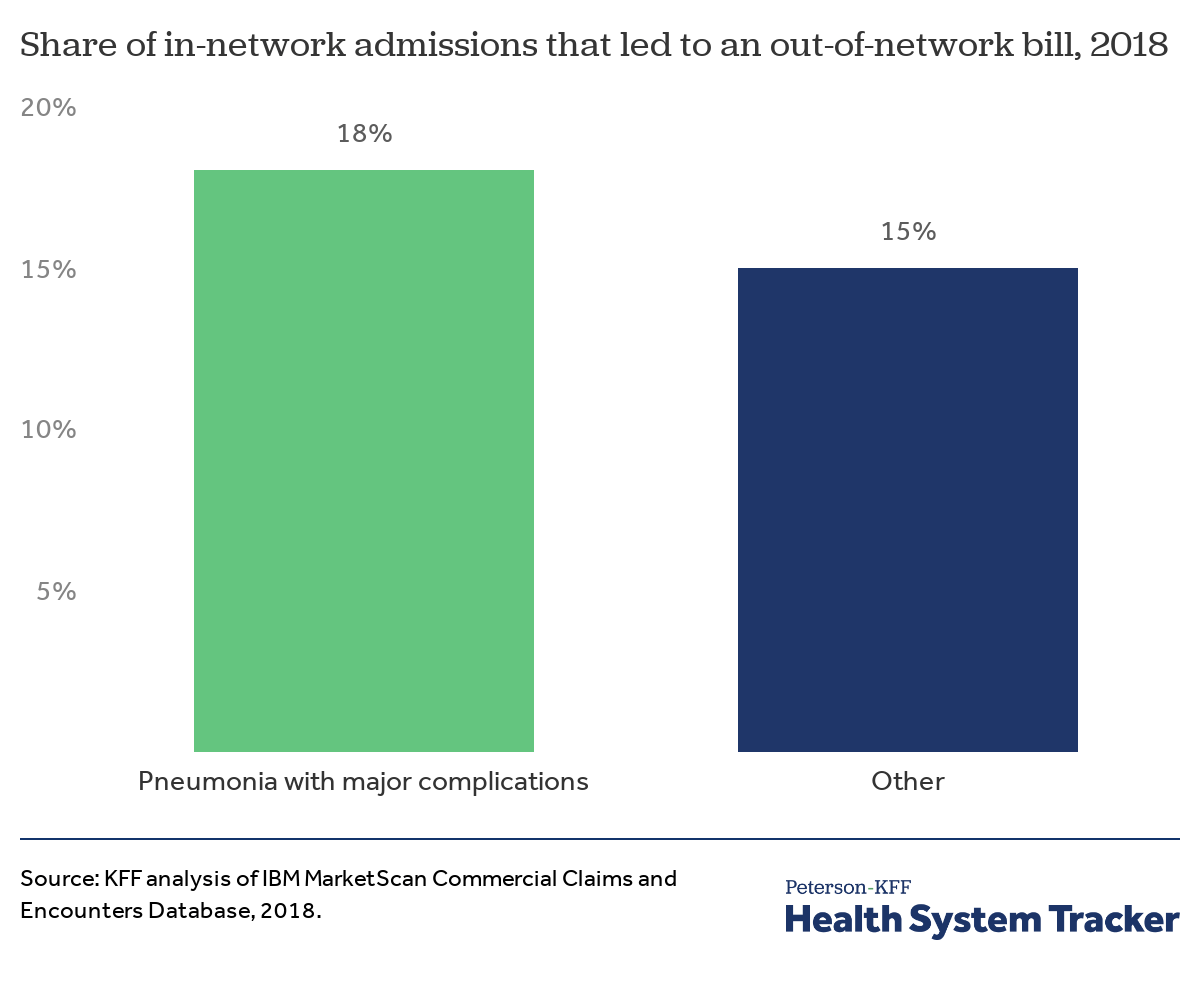 We estimated that nearly 1 in 5 (18%) of patients who have in-network admissions for pneumonia with major complications or comorbidities face out-of-network charges. Fifteen percent of patients admitted into an in-network facility for all other medical conditions received an out-of-network charge. (This analysis builds on earlier analysis demonstrating that the incidence of surprise bills vary by diagnosis and type of admission.)

Medical costs are already a common concern in the U.S., particularly for people without insurance, those with high deductibles, and those in worse health. In the context of the COVID-19 pandemic, it is of even greater concern, as many people could be incurring high out-of-pocket costs, at a time when there is also risk of a recession. The pandemic could add more costs to the healthcare system, employers, and insurers as well, though that will depend on how many people are infected and how many become seriously ill. For individuals with private insurance who do become seriously ill, it is likely their out-of-pocket costs could top $1,300.

The challenge of addressing these concerns over costs in the United States is exacerbated by a fragmented health insurance system and decentralized regulation process. Several states have moved to require fully-insured health plans regulated by the state to waive cost-sharing for testing. These states, however, are unable to regulate the self-insured employer plans, which are regulated by the federal government and cover 59% of covered workers at private sector employers. To date the federal response has been to ask insurers to voluntarily waive costs of testing. Consequently, some insurers administering self-insured employer plans have responded by extending this policy to their self-funded business, while allowing employers to opt-out.

Even if testing is made widely available without cost-sharing, people with private coverage who contract COVID-19 risk high out-of-pocket costs if they need hospitalization. Former Vice President Joe Biden’s proposed response to COVID-19 would cover treatment costs through an emergency medical plan. At this time, the U.S. Congress is currently considering legislation to respond to COVID-19, but there is no indication that it will address treatment costs.

We analyzed a sample of medical claims obtained from the 2018 IBM Health Analytics MarketScan Commercial Claims and Encounters Database, which contains claims information provided by large employer plans. We only included claims for people under the age of 65, as people over the age of 65 are typically on Medicare. This analysis used claims for almost 18 million people representing about 22% of the 82 million people in the large group market in 2018. Weights were applied to match counts in the Current Population Survey for enrollees at firms of a thousand or more workers by sex, age and state. Weights were trimmed at eight times the interquartile range.

Inpatient claims were aggregated by admission. Each claim has a variable (‘ntwkprov’) that indicates whether or not the provider or facility providing the service was in the health plan’s network. In-network admissions were defined as admissions that included an in-network room and board charges. Some in-network admissions may include out-of-network facility charges.

The authors would like to thank Dustin Cotliar, MD, MPH for his contributions.