In this collection of charts, we use a variety of data sources to explore trends in health outcomes, quality of care, and spending on treatment for people in the U.S. with diabetes and other endocrine disorders. In the U.S., diabetes is the most common endocrine disease and is associated with severe health complications such as vision loss, kidney failure, lower-extremity amputations, and heart disease. As the following charts show, the U.S. has seen a reduction in complications due to diabetes and improvement in disease management, but diagnosis rates and diabetes-related spending continue to grow.

Total health spending and out-of-pocket costs are generally higher for people with diabetes than those without diabetes. Recently, the increasing price of some types of insulin has drawn attention from both consumers and lawmakers concerned about insulin affordability for those who rely on it to survive. Complete data regarding these price changes — including discounts drug makers give to insurers and pharmacy benefits managers — are not publicly available. However, it is likely that increases in net prices are lower than increases in list prices after accounting for these discounts. How changes in pricing affect people with diabetes depends on their source of coverage and plan design. 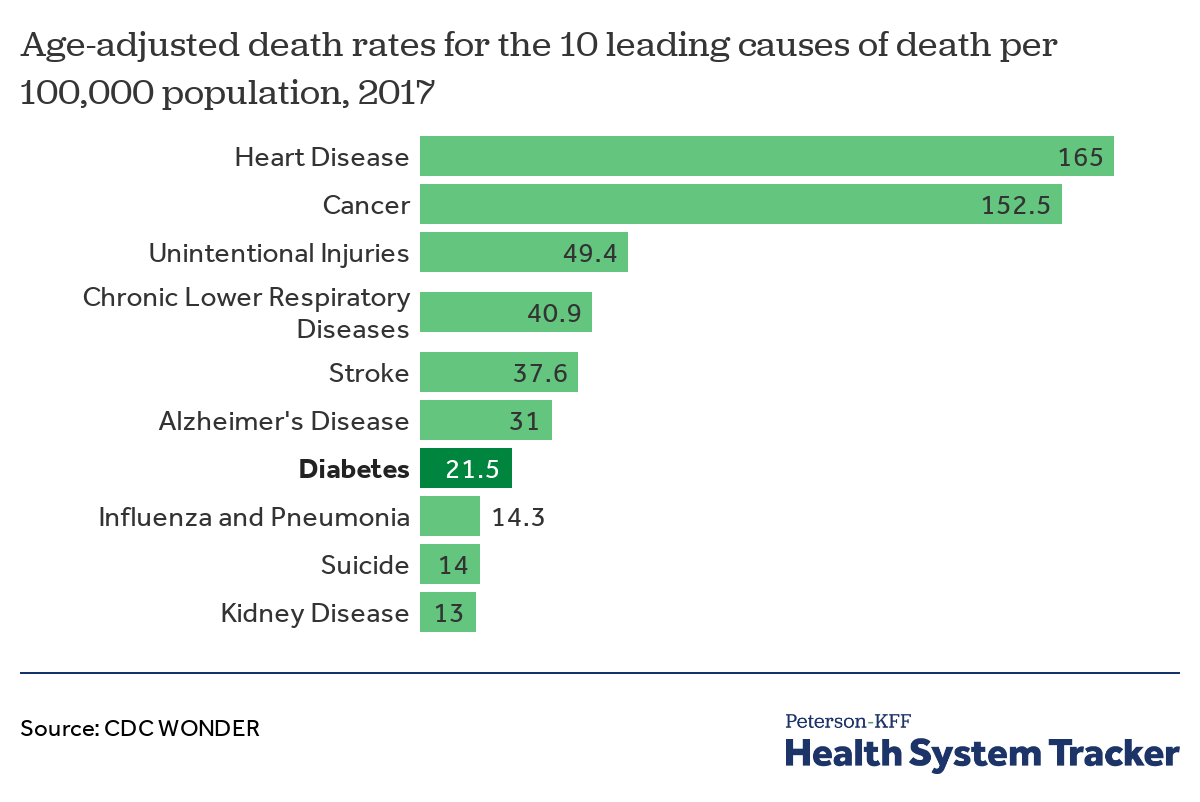 Diabetes is among the 10 leading causes of death in the U.S. Diabetes is a type of endocrine disease. Such diseases occur when any of the major glands in the endocrine system produce too little or too much of a particular hormone, or when the body responds irregularly to hormones. Diabetes, in particular, presents when the body is unable to properly regulate blood sugar levels.

There are three main types of diabetes: type 1, type 2, and gestational diabetes.

The mortality rate for diabetes in the U.S. remains higher than the average rate for other comparable countries 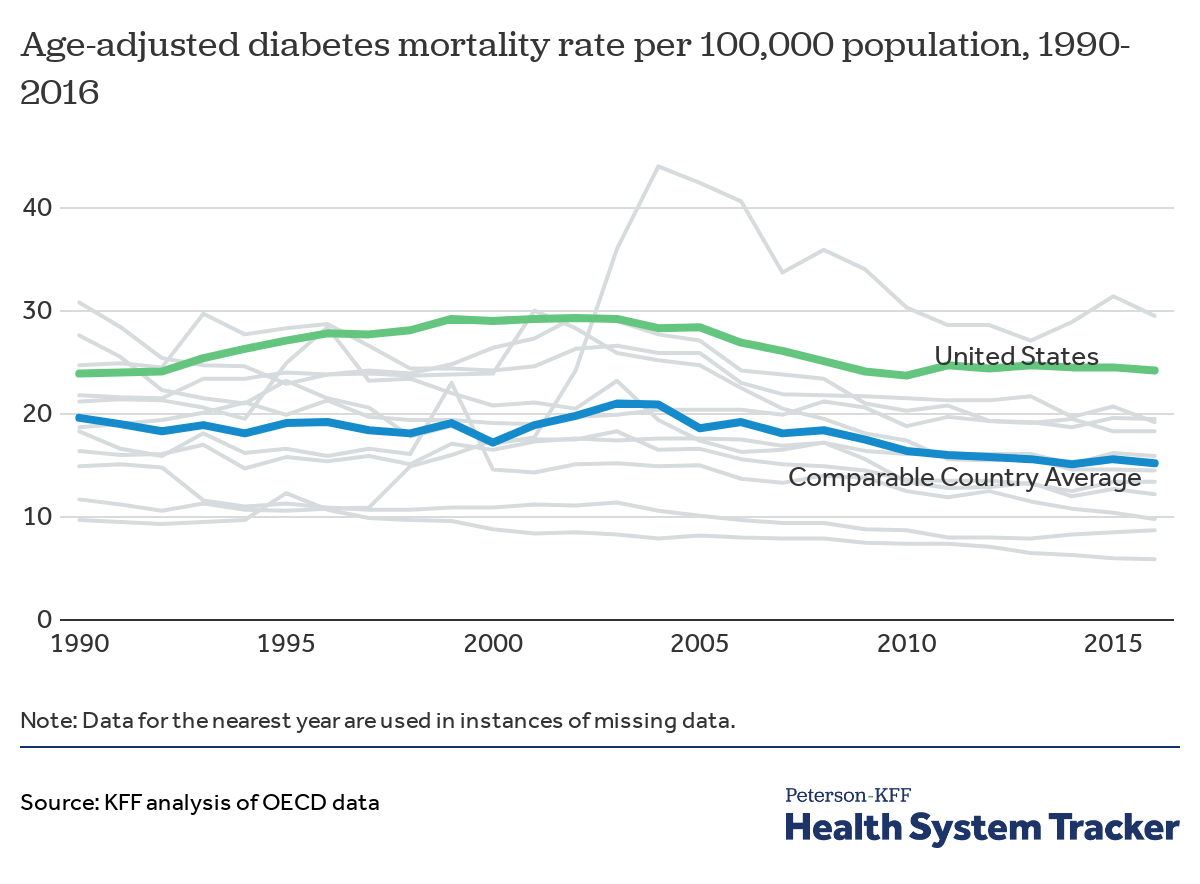 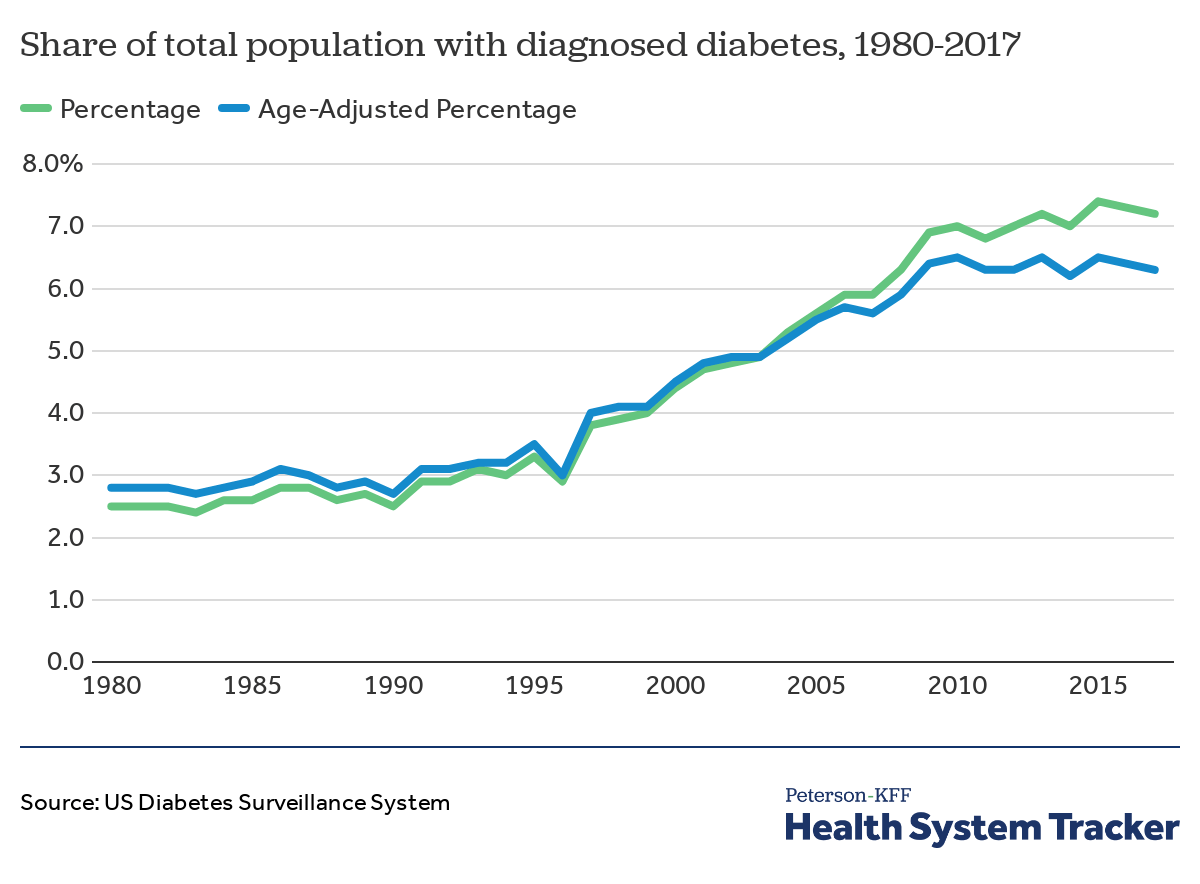 In 2017, 7.2% of the population was diagnosed with diabetes, or 6.3% of the population when adjusted for age, which takes into account changes in age distribution. This marks a 188% increase from 1980 (and 125% when adjusted for age). Additionally, people who have diabetes may be undiagnosed for the condition. Current estimates from the CDC suggest that 30.3 million people in the U.S. (9.4% of the total population) have diabetes, including 23.1 million with a diagnosis and 7.2 million who are undiagnosed. 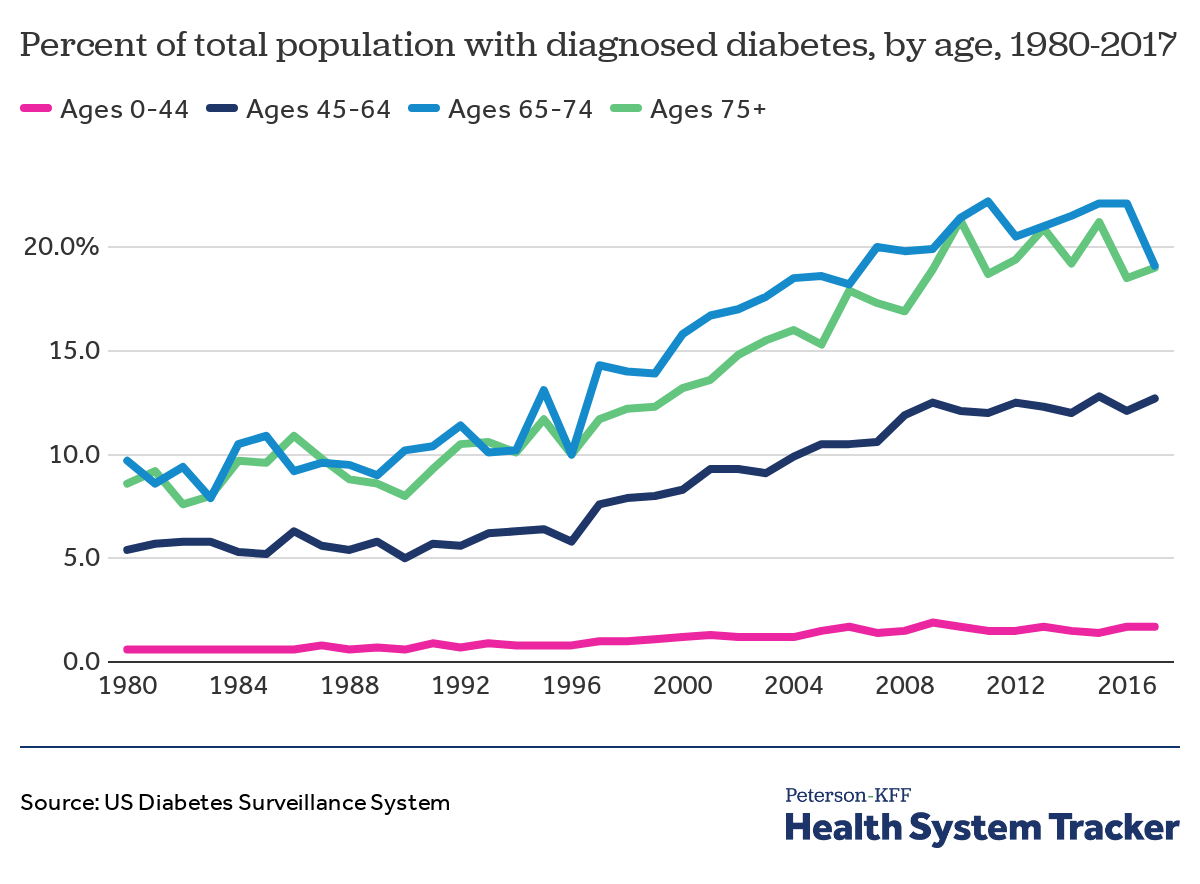 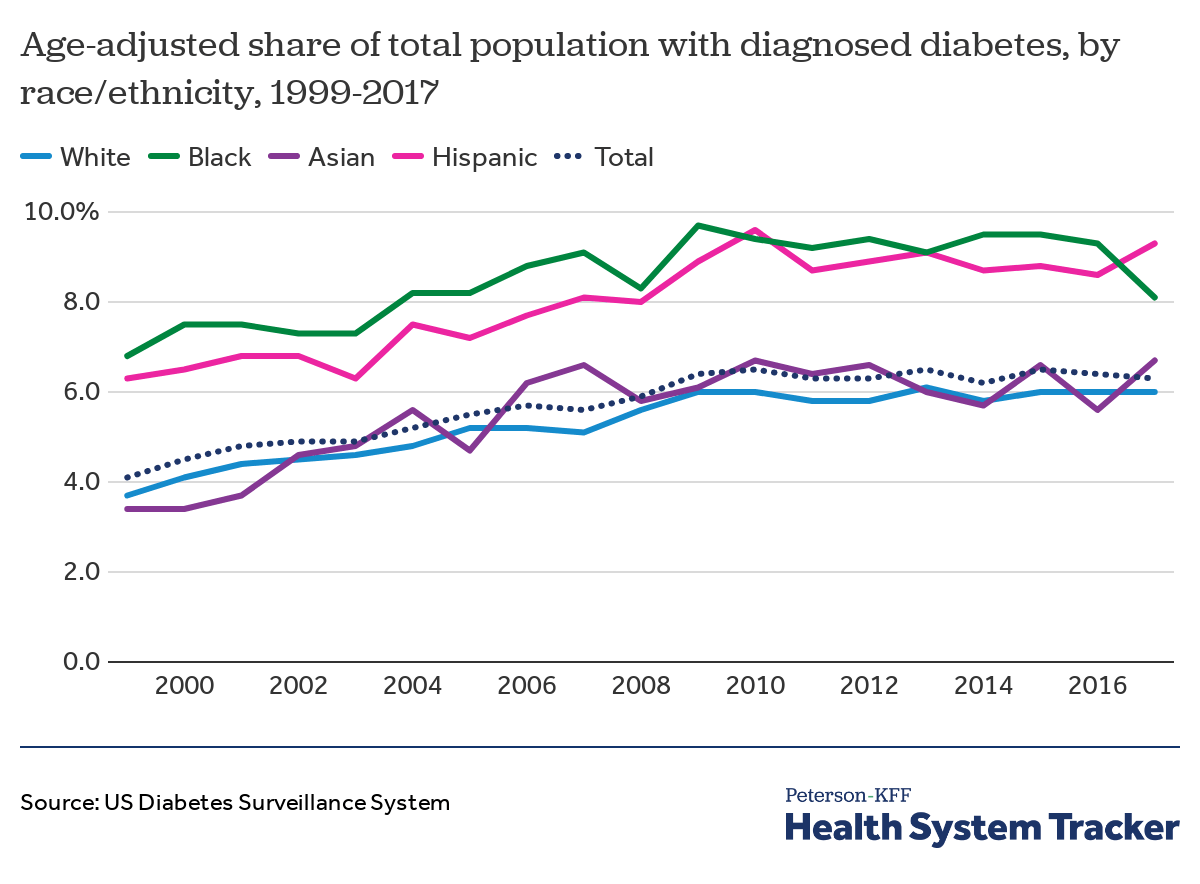 In the U.S., the prevalence of diabetes has increased over time across all racial and ethnic groups and most rapidly among Asian and White people, but Black and Hispanic people continue to have the highest rates of diagnosed diabetes. In 2017, 6% of White people and nearly 7% of Asian people had a diabetes diagnosis, compared to over 8% of Black people and over 9% of Hispanic people — well above the national average of 6% of the total population for all ages. From 1999 to 2017, the percentage of people with a diabetes diagnosis increased by 19% among Black people, 48% among Hispanic people, 62% among White people, and 97% among Asian people. 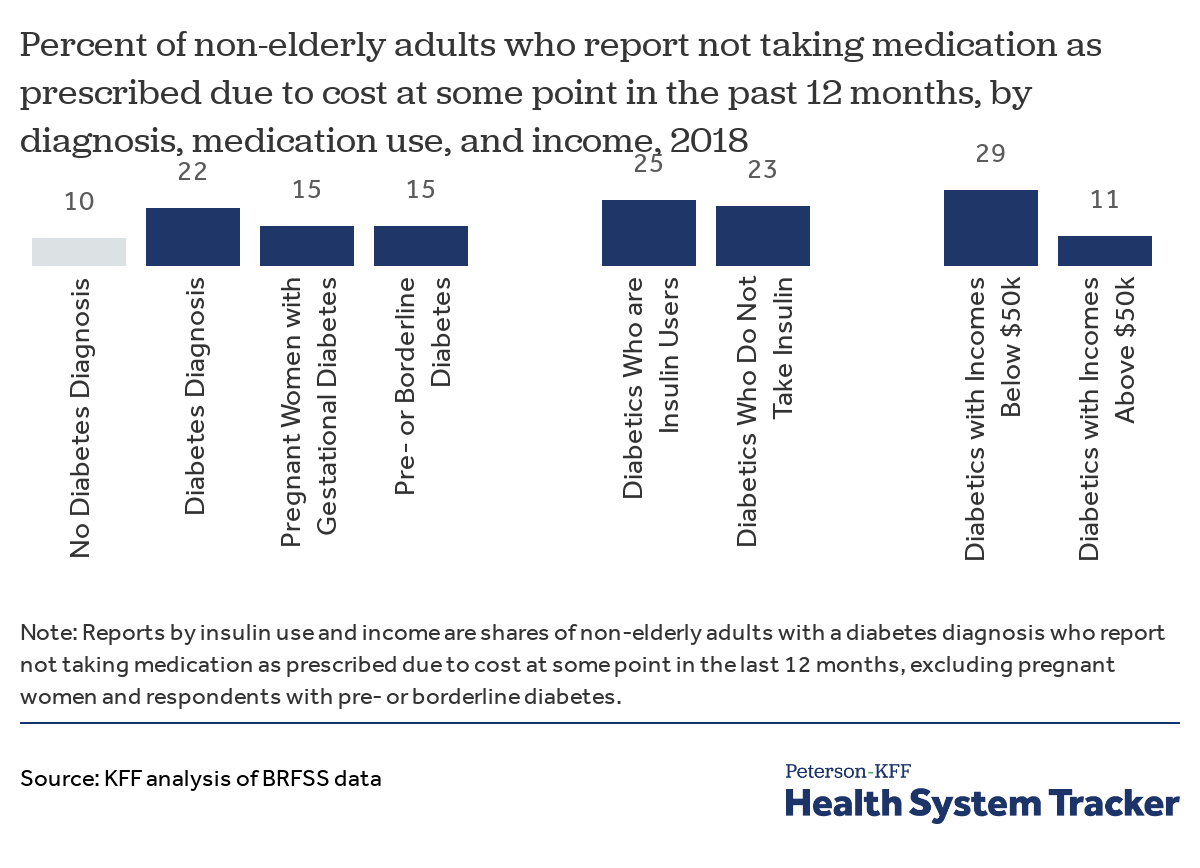 Among those with employer-sponsored health insurance, people with diabetes are more likely to postpone or delay treatment than those without diabetes 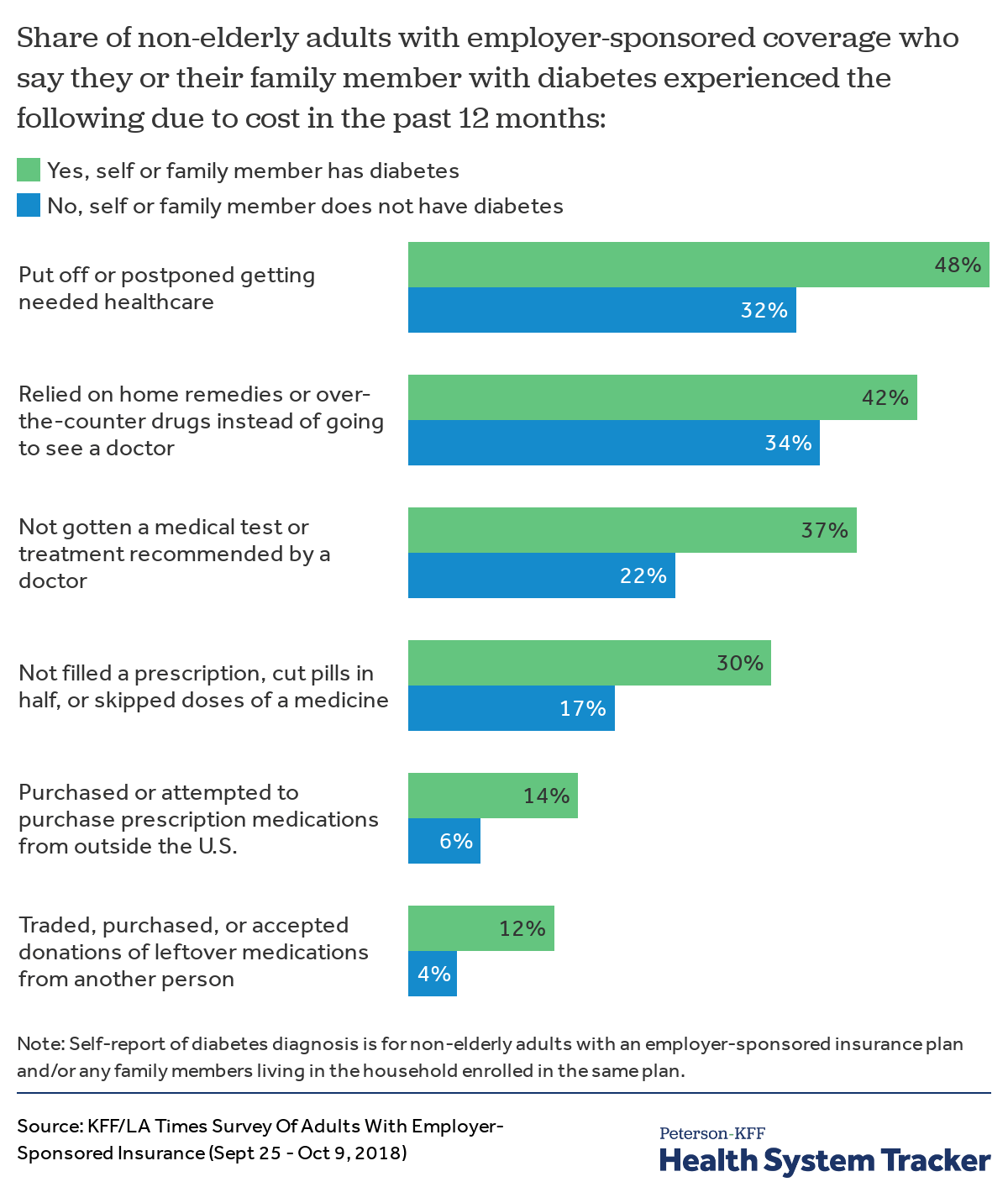 Among those with employer-sponsored health insurance, people with diabetes experience more difficulty affording healthcare than those without diabetes 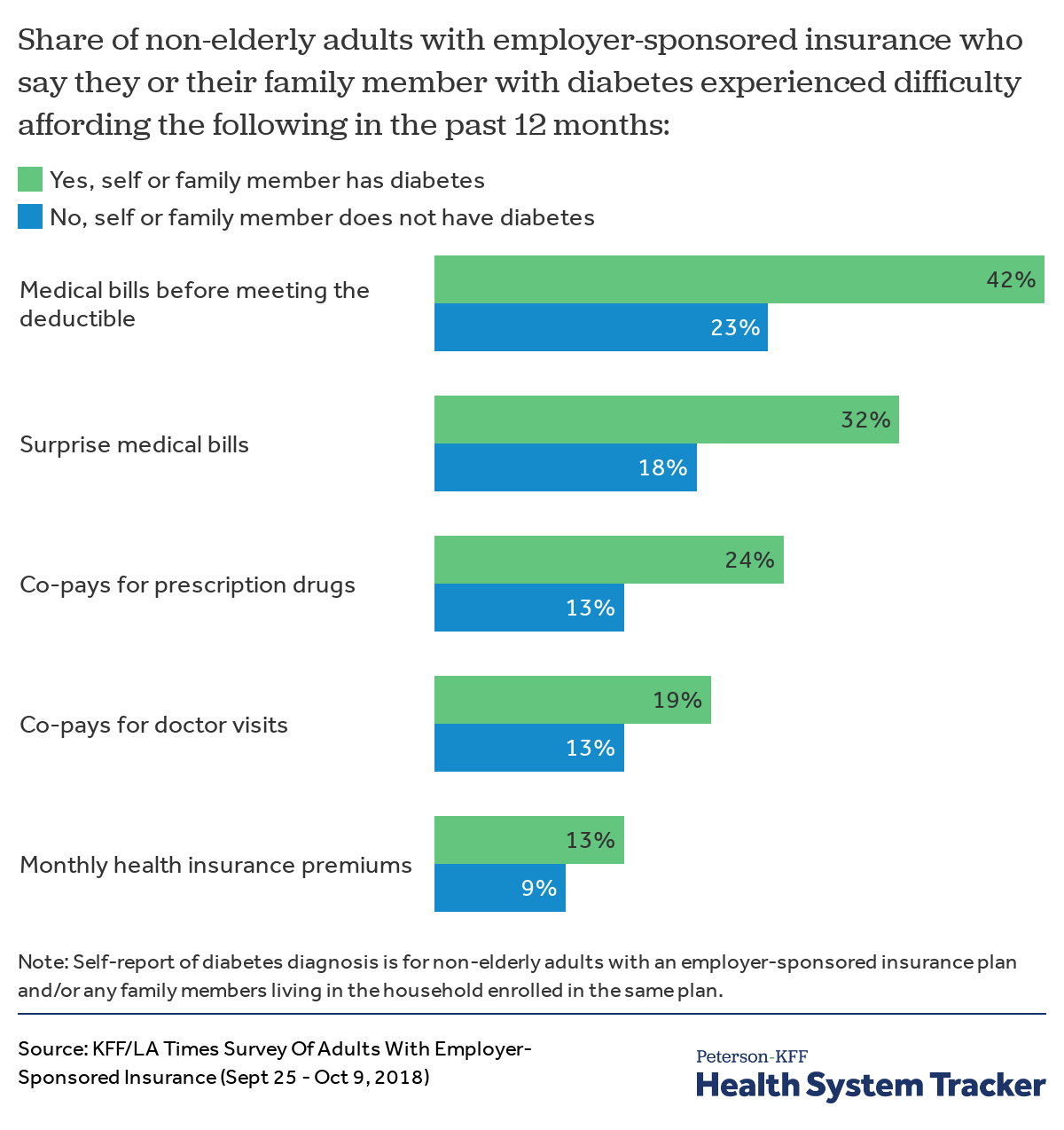 Across the board, people with employer-sponsored insurance who either have diabetes or have a family member with diabetes covered by their plan are more likely to express difficulty affording monthly health insurance premiums and out-of-pocket cost-sharing, including medical bills that must be paid before meeting their deductible, co-pays for treatment as well as prescription drugs, and surprise medical bills. Overall, 58% of people with employer-sponsored coverage who either have diabetes themselves or have a family member with diabetes say they have had difficulty affording any type of healthcare or have any problems paying medical bills (including out-of-pocket payments), compared to 38% of those without a diabetes diagnosis in the household. 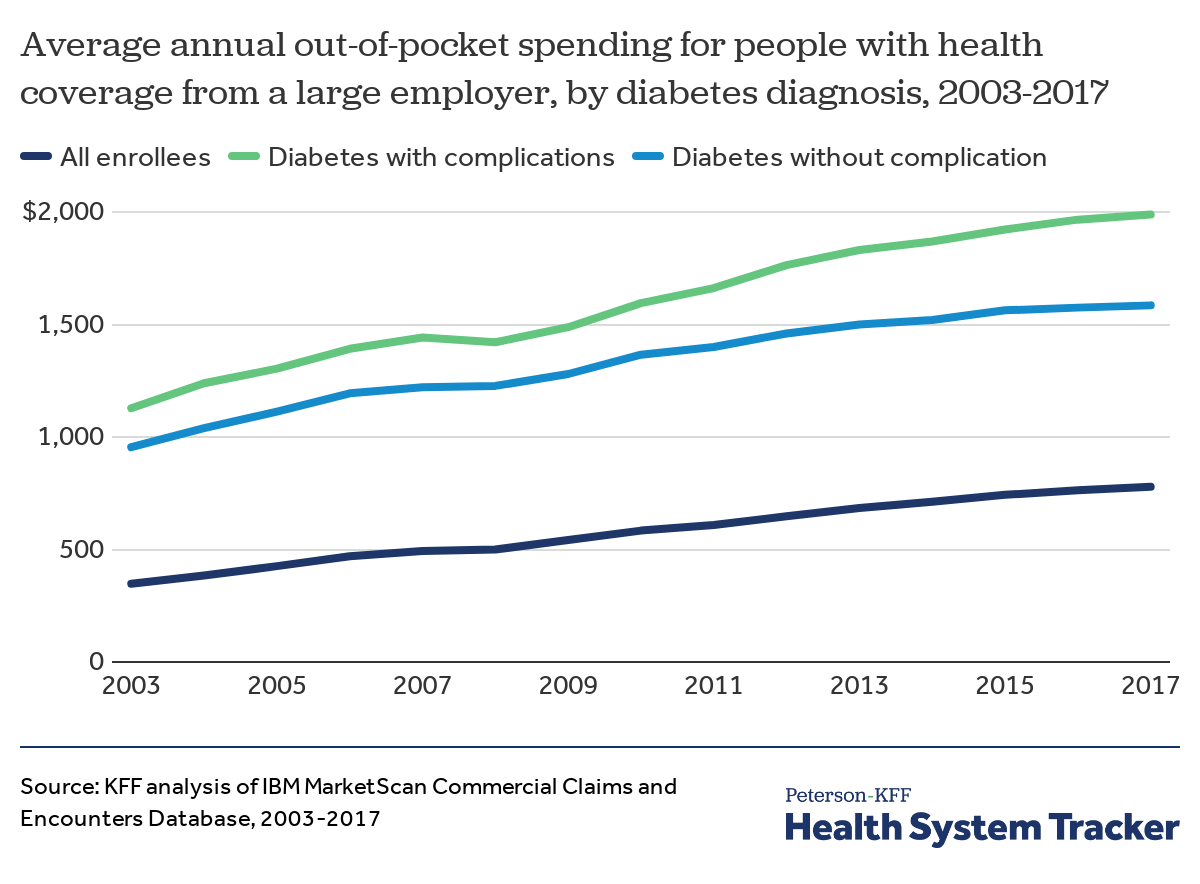 Among people with large employer coverage, spending on healthcare is much higher for enrollees with diabetes than for all enrollees 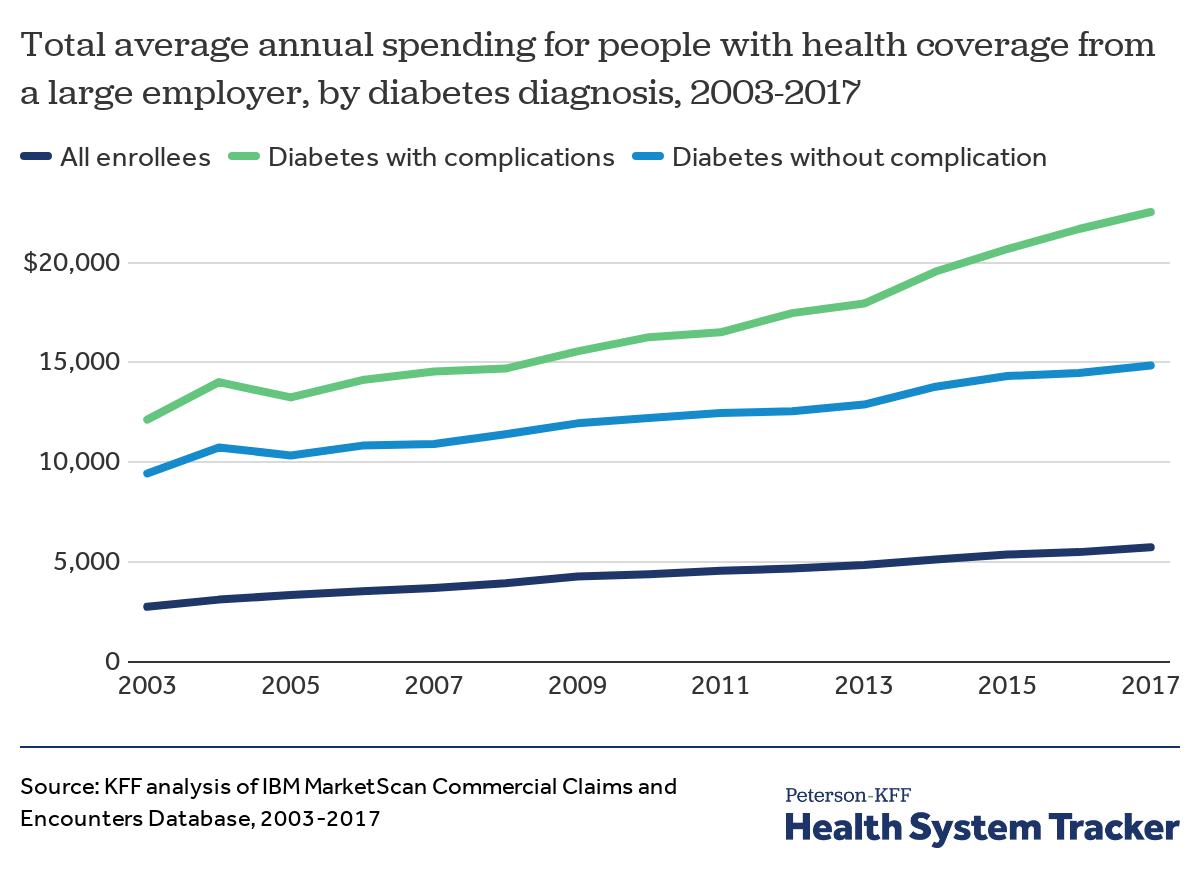 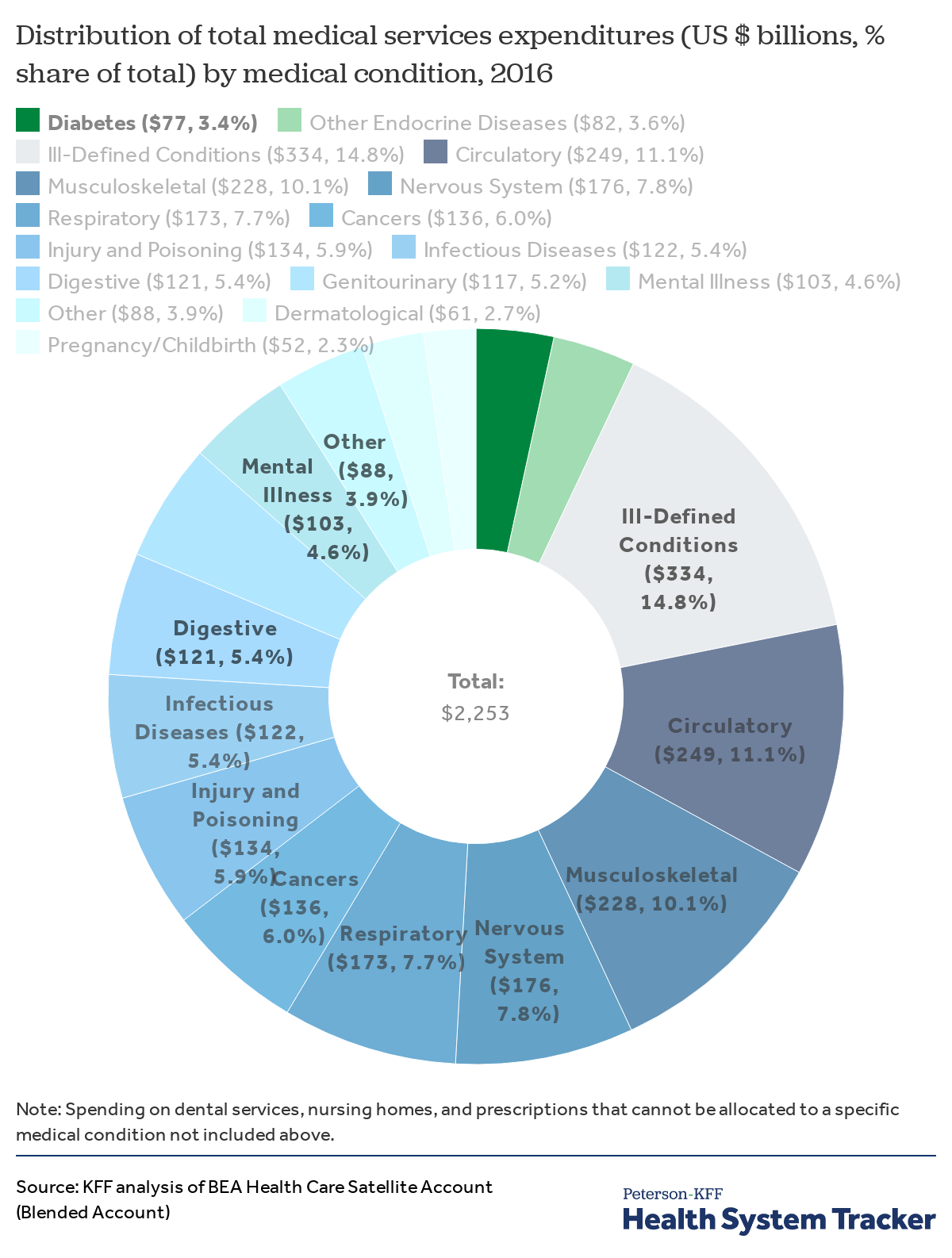 In 2016, the U.S. spent approximately $77 billion on the treatment of diabetes, according to estimates by the Bureau of Economic Analysis. This represents 3.4% of total medical services spending on treatment of diseases and other medical conditions ($2.25 trillion). 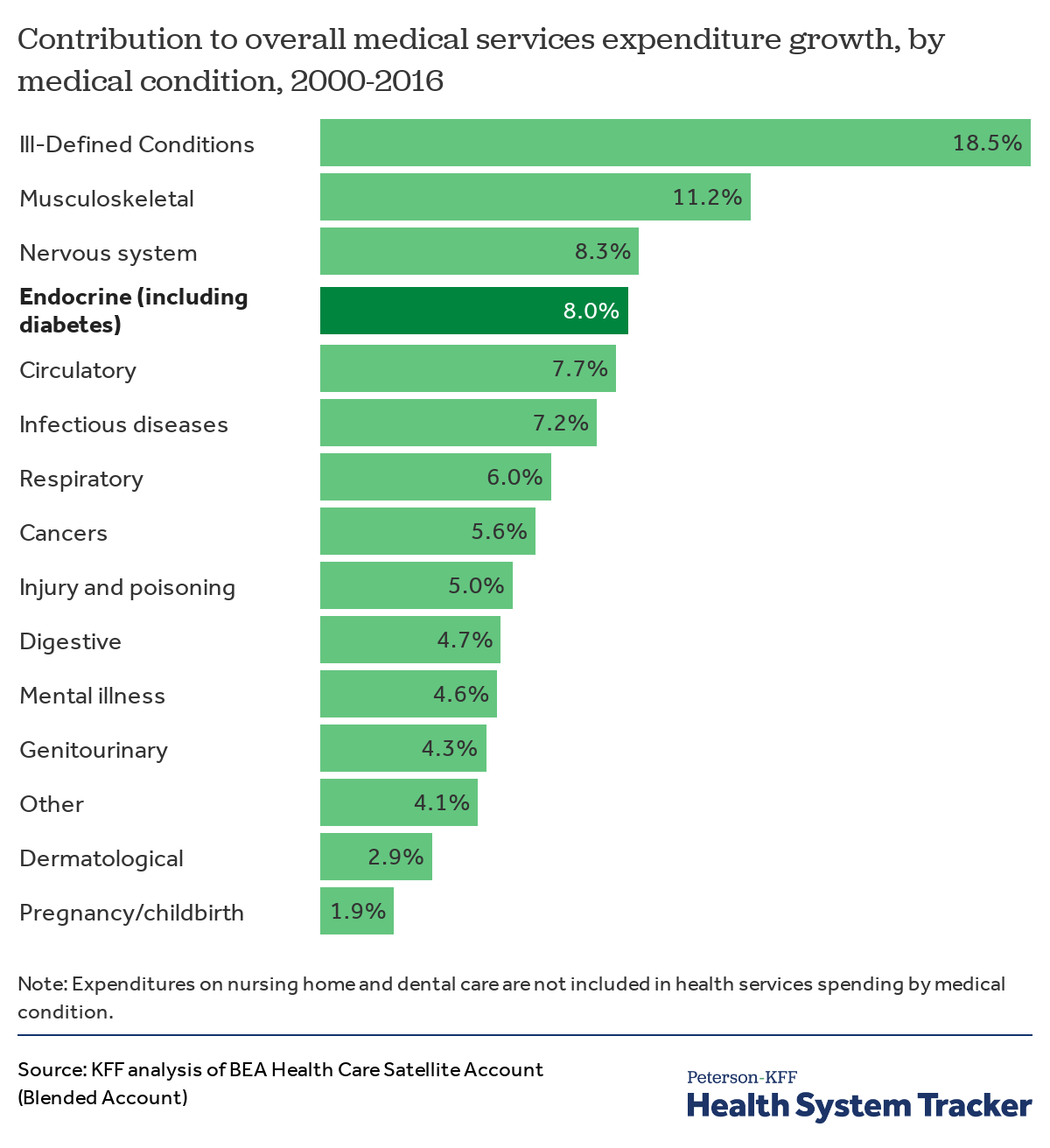 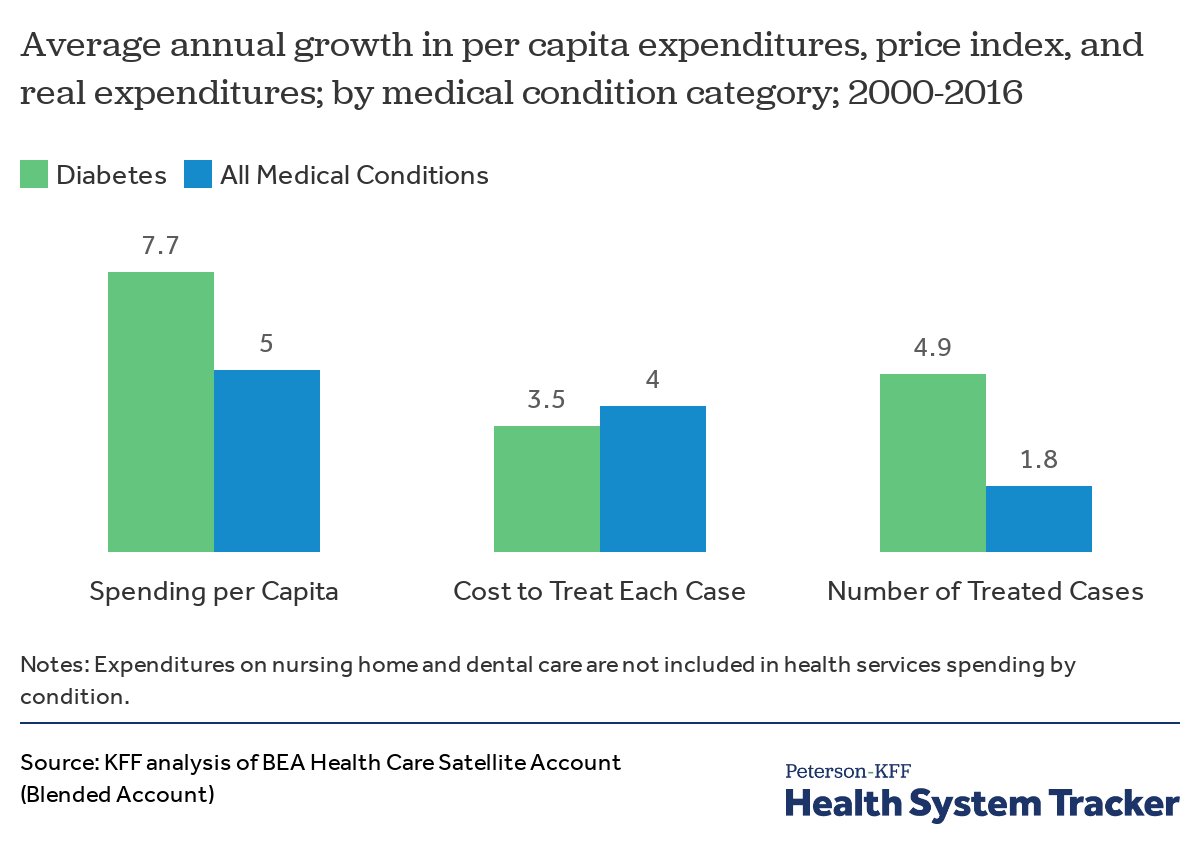 Between 2000 and 2016, the average annual growth in per capita expenditures for diabetes was higher than the average growth in spending on all medical condition categories. In this analysis, spending is calculated for a particular medical condition or disease, rather than by service. Growth in spending on diabetes care over the period was driven by both increases in the number of people being treated for these conditions and increases in the costs of treatment. 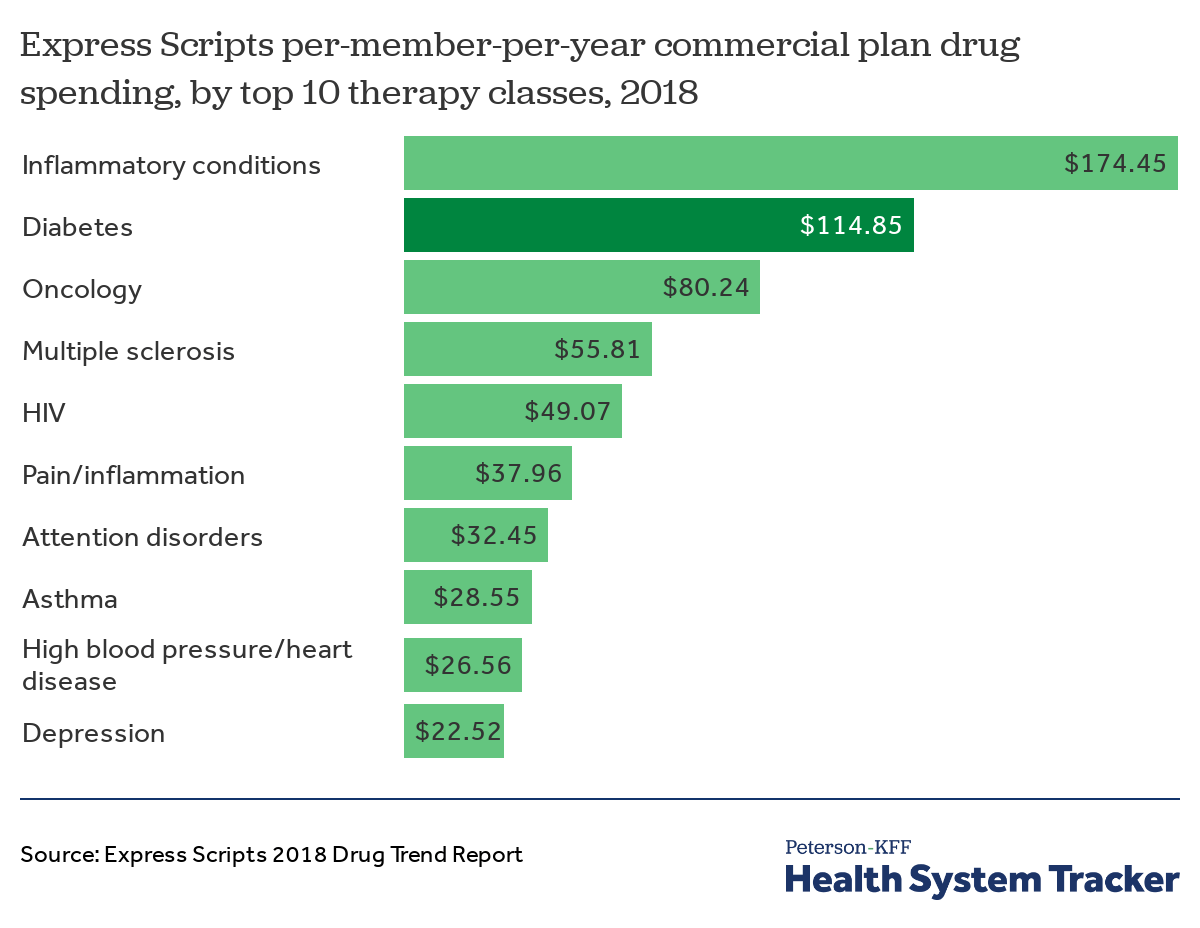 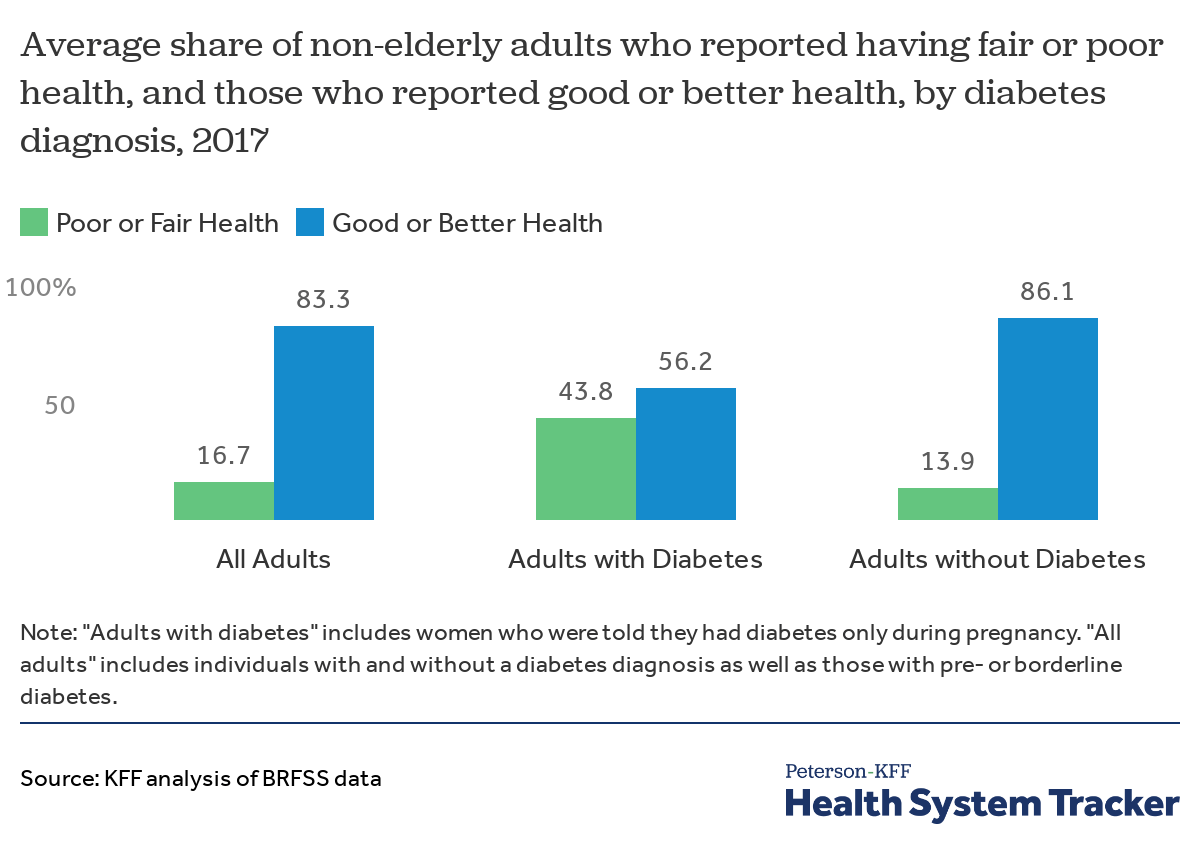 U.S. disease burden for endocrine diseases has increased over the past three decades 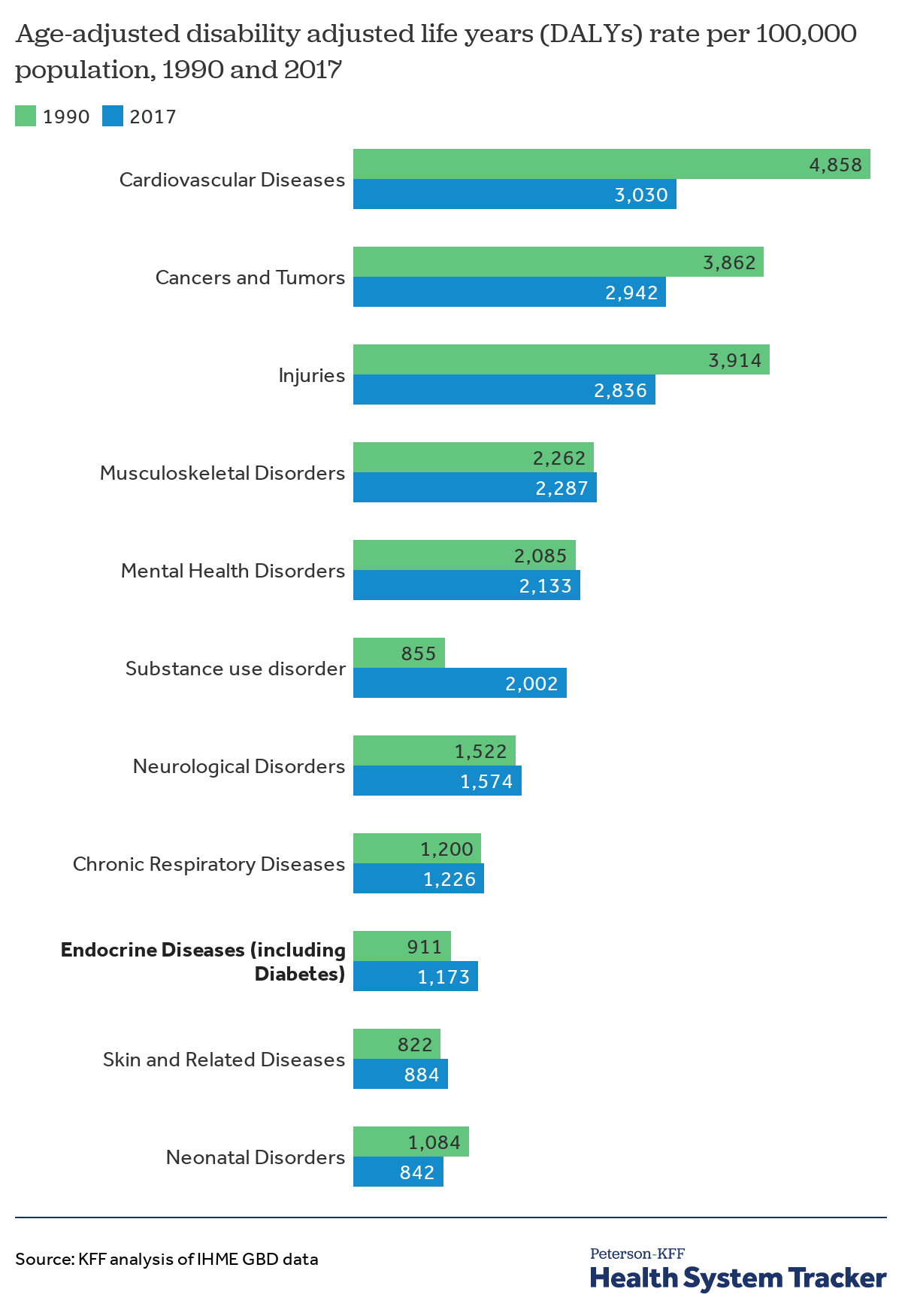 Aside from mortality and diagnosis rates, another way to measure the effect diabetes has on health is to look at the burden of disease, which takes into account both years of life lost due to premature death as well as years of productive life lost to poor health or disability. Using a measure called Disability Adjusted Life Years (DALYs), the Institute for Health Metrics and Evaluation finds that diabetes and kidney diseases were the ninth leading cause of disease burden in the U.S. in 2017. For the diabetes and kidney disease category, the growth in age-standardized DALYs stems from increases in both years of life lost and years lived with disability.

Hospitalization rates for some diabetes complications have declined over time 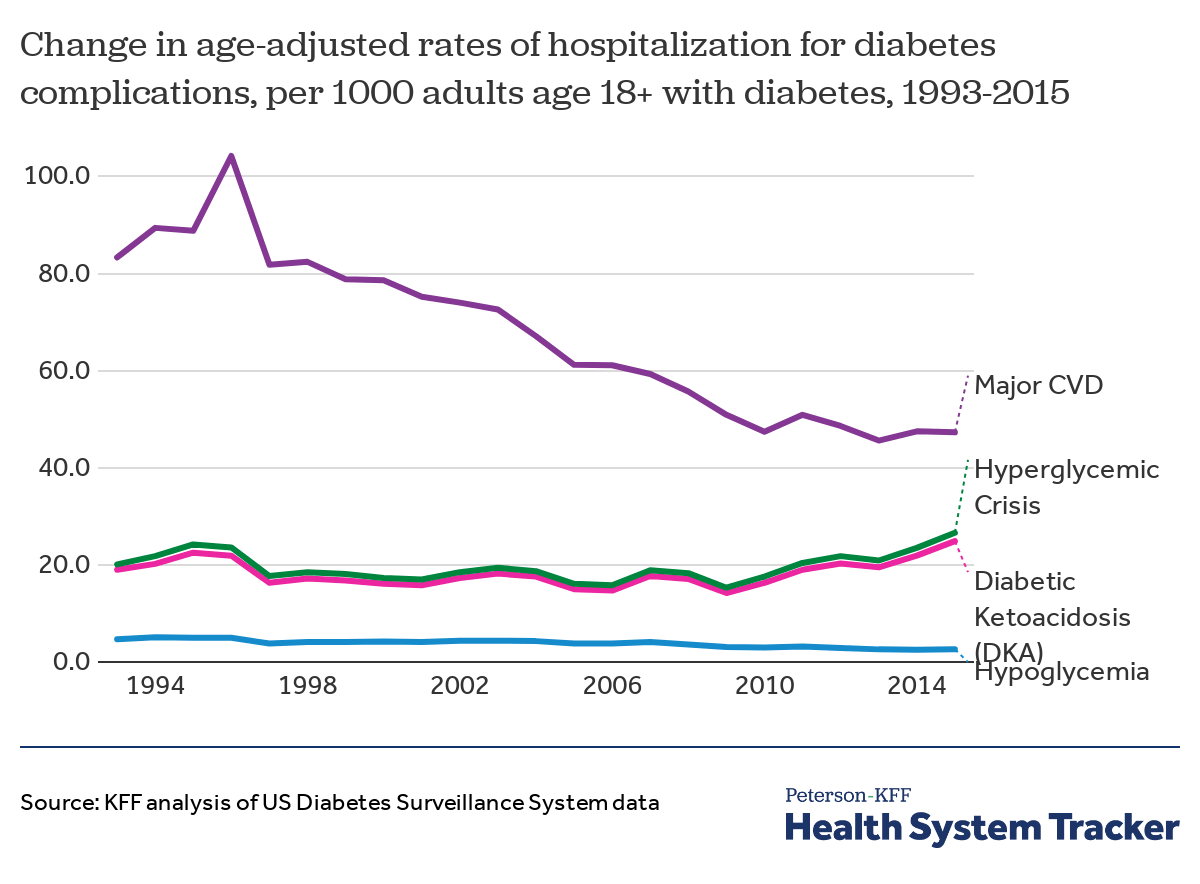 Hospitalizations for diabetes complications differ by age. Diabetic ketoacidosis is an acute, life-threatening condition caused by high blood sugar levels that persist for too long, leading to a build-up of acids in blood. Hyperglycemic crisis is caused by chronically high blood glucose levels and can lead to complications such as, stroke, heart attack, amputation, and kidney disease. Both complications occur most often for patients with type 1 diabetes, who also tend to be younger — thus, adults with diabetes between the ages 18-44 experience most hospitalizations for both diabetic ketoacidosis and hyperglycemic crisis. Meanwhile, those ages 75 and up are most likely to be hospitalized for hypoglycemia (very low blood sugar) or major cardiovascular disease. Preventive health care and management of risk factors are among the primary reasons for a decline in severe diabetes complications. 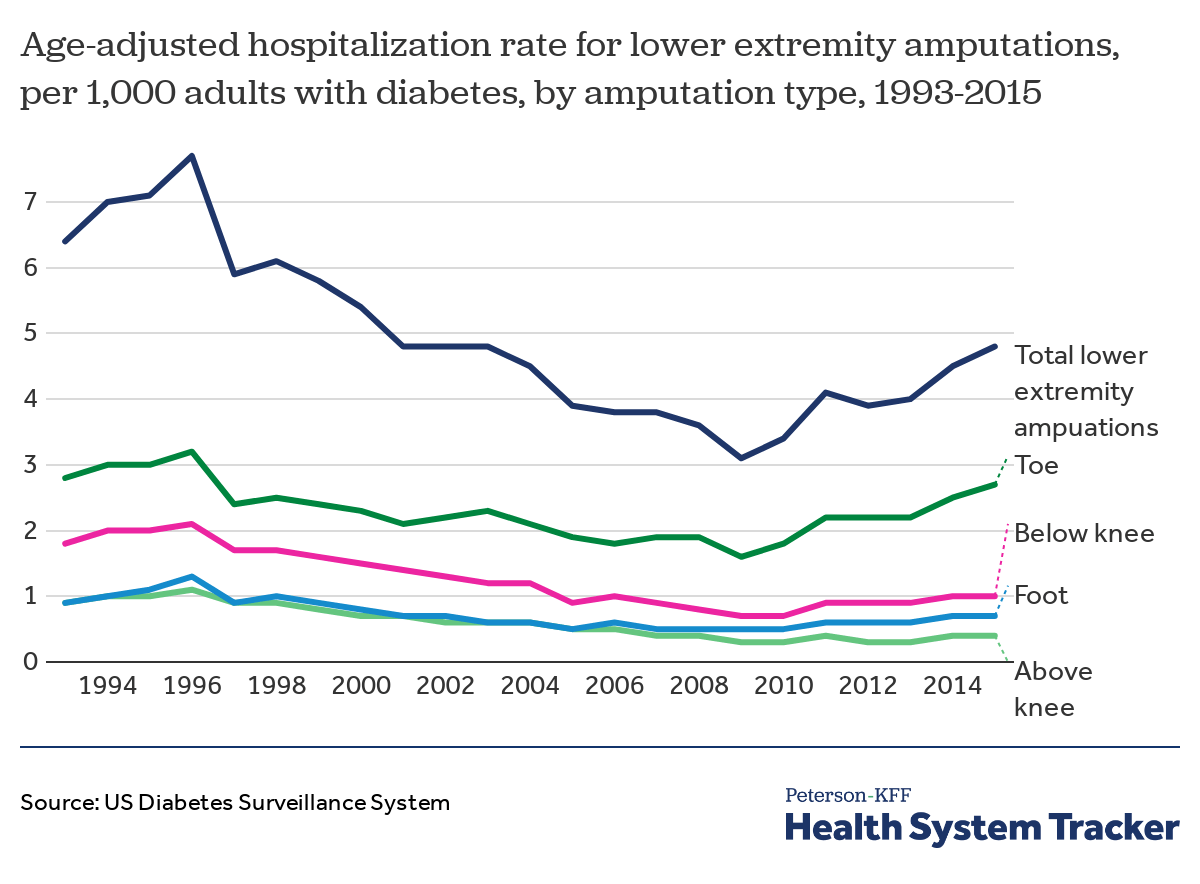 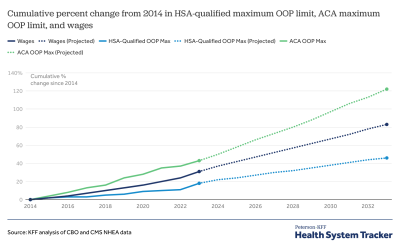