Prescription drug costs are a pressing concern for both consumers and policymakers. Rising drug prices affect patients’ out-of-pocket costs as well as the budgets of private and public payers, though the challenges vary by payer. This analysis compares prescription drug spending and use in large private employer plans, Medicare Part D, and Medicaid, based primarily on claims data by payer, which does not account for rebates. Rebates differ by payer, and are estimated to be larger for Medicaid than Medicare Part D or private employers.

Spending by private health insurers, Medicare, and Medicaid accounts for a majority of prescription drug spending in the U.S., but the types of individuals who receive prescription drug coverage from these three payers varies:

This variation in the types of individuals covered by each payer is reflected in some of the patterns of prescription drug spending and use presented below.

Highlights from this analysis include:

Spending by private health insurance, Medicare, and Medicaid accounts for more than 80% of total retail prescription drug spending in the U.S. 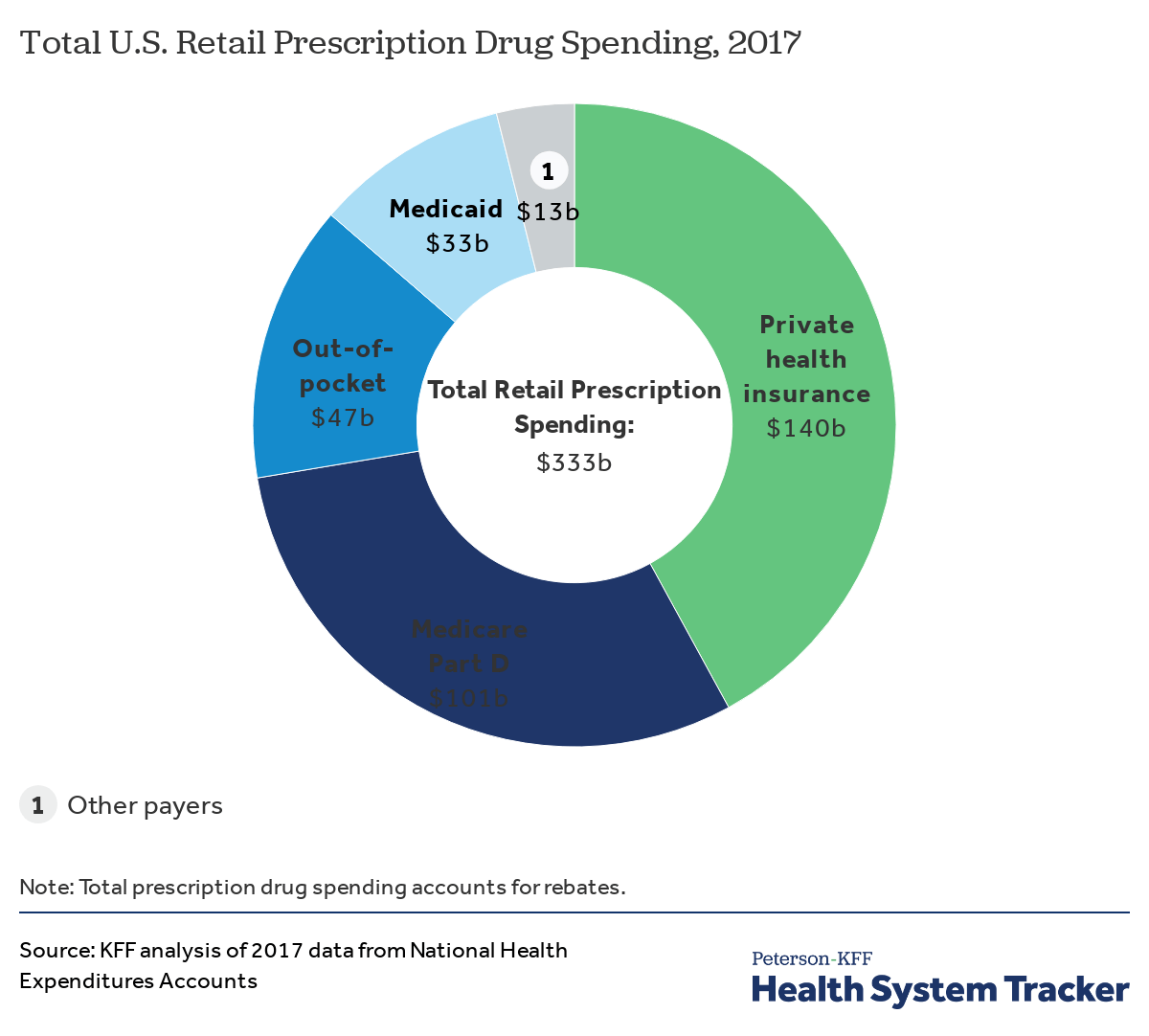 In 2017, total U.S. retail prescription drug spending was $333 billion, after accounting for rebates, with the majority (82%) of spending incurred by the three major sources of payment in the U.S. health system: private health insurance, Medicare, and Medicaid. Among all payers, private health insurance accounted for the largest share of drug spending, at 42%, followed by Medicare at 30%, and Medicaid at 10%. Patient out-of-pocket costs represented 14% of total retail drug spending.

Across payers, a small number of drug products account for a disproportionate amount of total drug spending 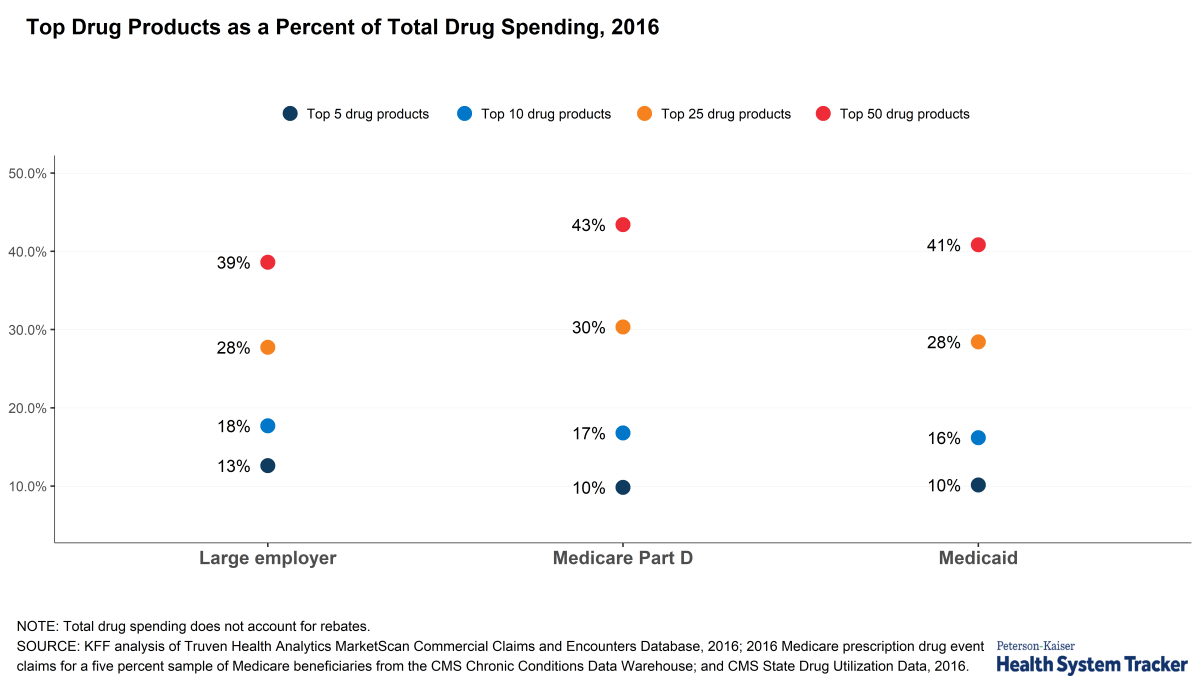 The top 50 drug products by spending account for a large share of total drug spending but a relatively small share of total prescriptions in large employer plans, Medicare Part D, and Medicaid 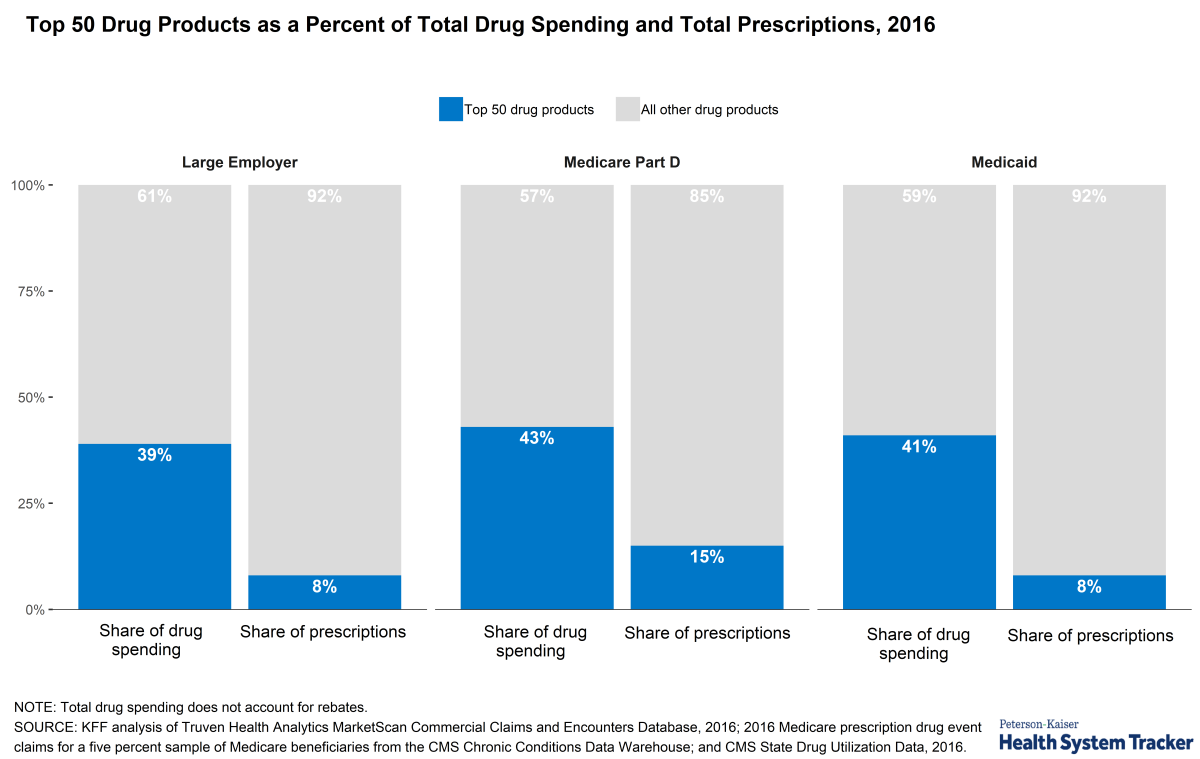 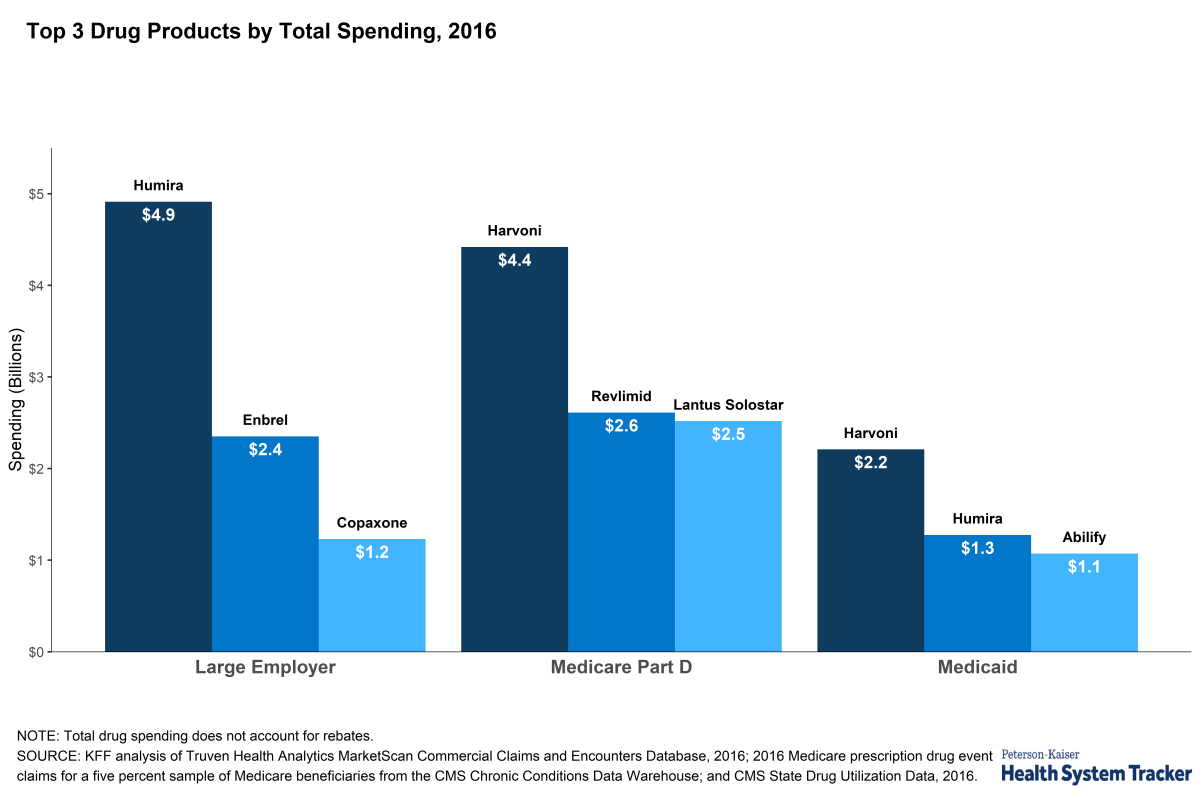 While some of the same drug products appear among the top 10 drug products with the highest total spending in large employer plans, Medicare Part D, and Medicaid, there is also variation that reflects differing covered populations 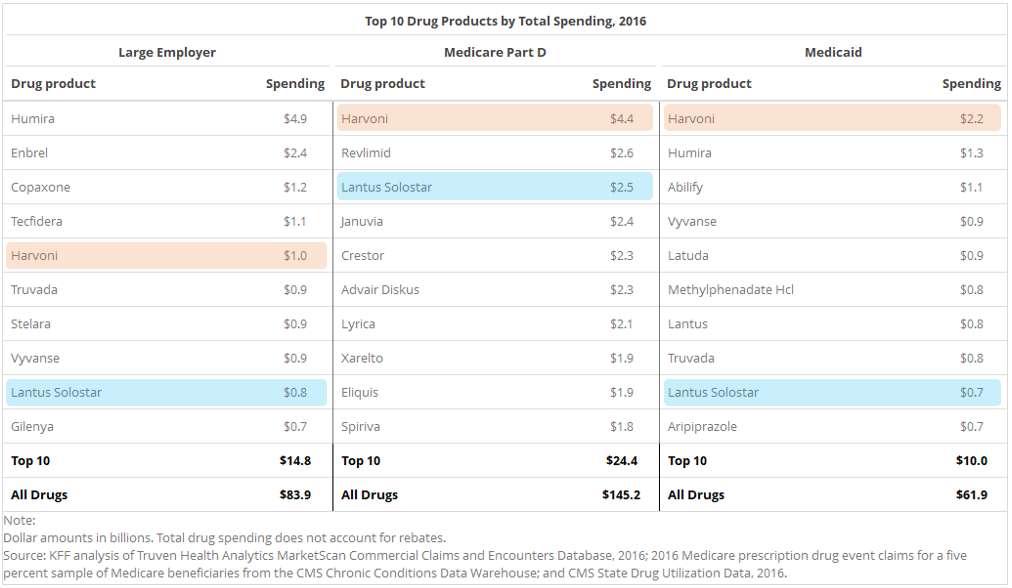 Among the top 10 drug products with the highest total spending in large employer plans, Medicare Part D, and Medicaid, there are two products in common: Harvoni, a treatment for hepatitis C, and Lantus Solostar, an insulin therapy for diabetes. There is additional overlap in the top 10 lists for large employer plans and Medicaid, including treatments for attention-deficit/hyperactivity disorder (ADHD) and HIV. Despite the overlap, the ranking of these drug products generally differs across payers, and there is also variation in which products have the largest total spending for each payer, which reflects the different types of populations covered. In particular, for Medicare Part D, the top 10 list includes treatments for cancer, chronic obstructive pulmonary disease, and high cholesterol which are more commonly used by older adults. For Medicaid, the top 10 list includes several psychotherapeutic medications, reflecting the important role that Medicaid plays in meeting the needs of people with mental illness.

Antibiotics and asthma/allergy drugs are among the most commonly used drugs in large employer plans, while drugs for high blood pressure and high cholesterol are more commonly used in Medicare Part D 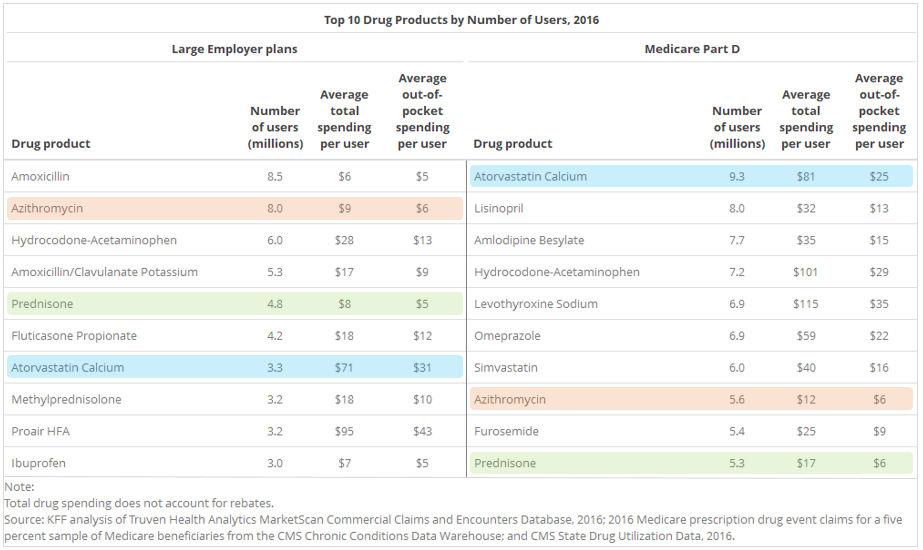 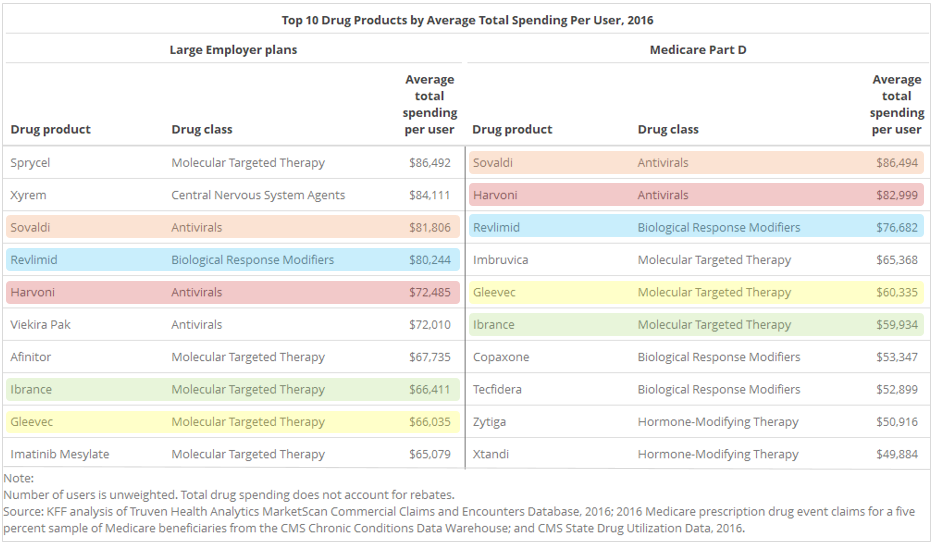 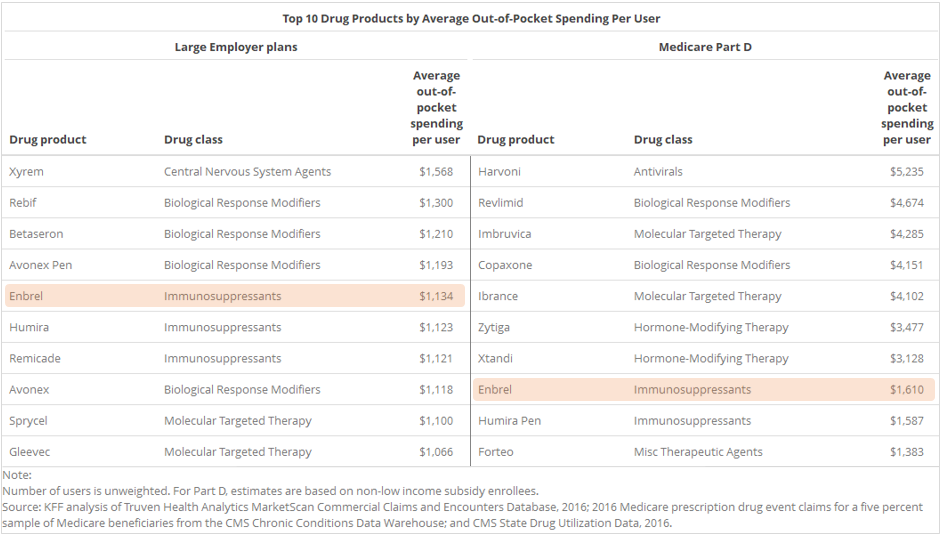 Although there is little overlap in the specific list of top 10 drug products used by people in large employer plans and Medicare Part D in terms of annual average out-of-pocket spending per user, the types of drugs with the highest out-of-pocket costs are similar, and include drug products to treat cancer, multiple sclerosis, and rheumatoid arthritis. In 2016, people in large employer plans paid more out of pocket for Xyrem, a treatment for narcolepsy, than for other drug products—$1,568 on average. In 2016, the hepatitis C treatment Harvoni was the most expensive drug product for Part D enrollees, with $5,235 in average annual out-of-pocket costs per user among those who did not receive low-income subsidies.

Antidiabetic agents, antivirals, and psychotherapeutics are among the top therapeutic classes by total spending in large employer plans, Medicare Part D, and Medicaid 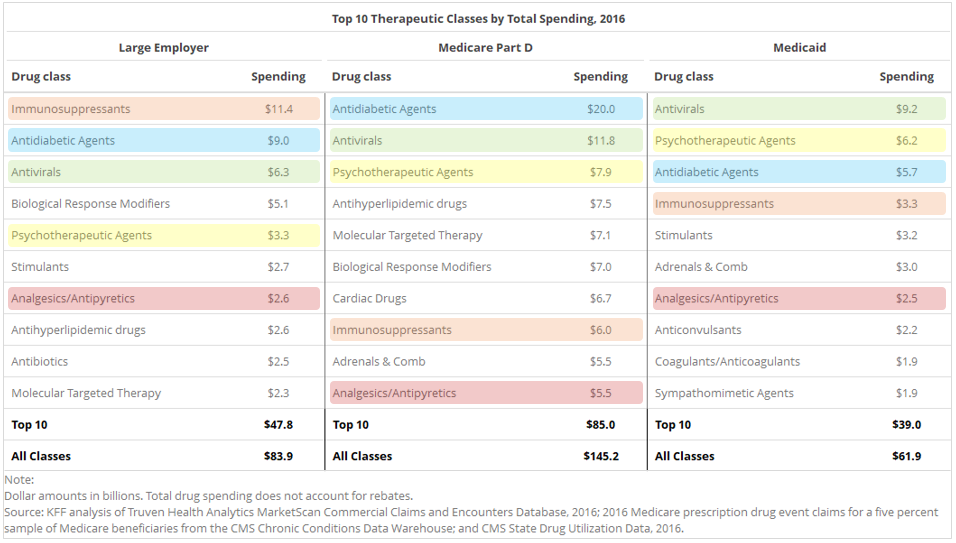 Cardiac drugs, psychotherapeutics, and pain medications are among the top therapeutic classes by volume in large employer plans, Medicare Part D, and Medicaid 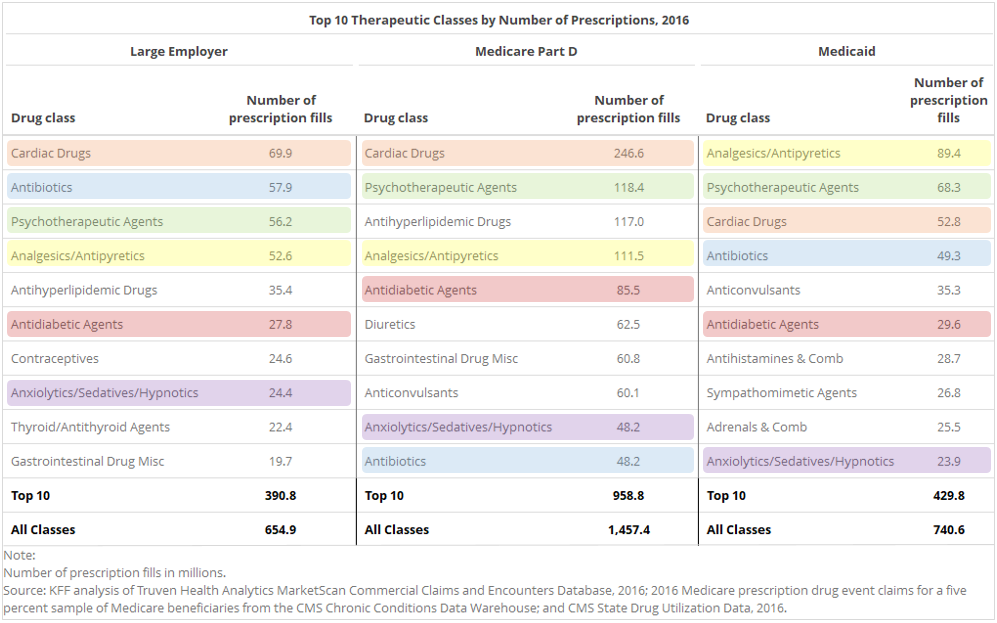 Annual average out-of-pocket spending is higher among people in Medicare Part D plans than those in large employer plans, but spending by both groups was lower in 2016 than in 2007 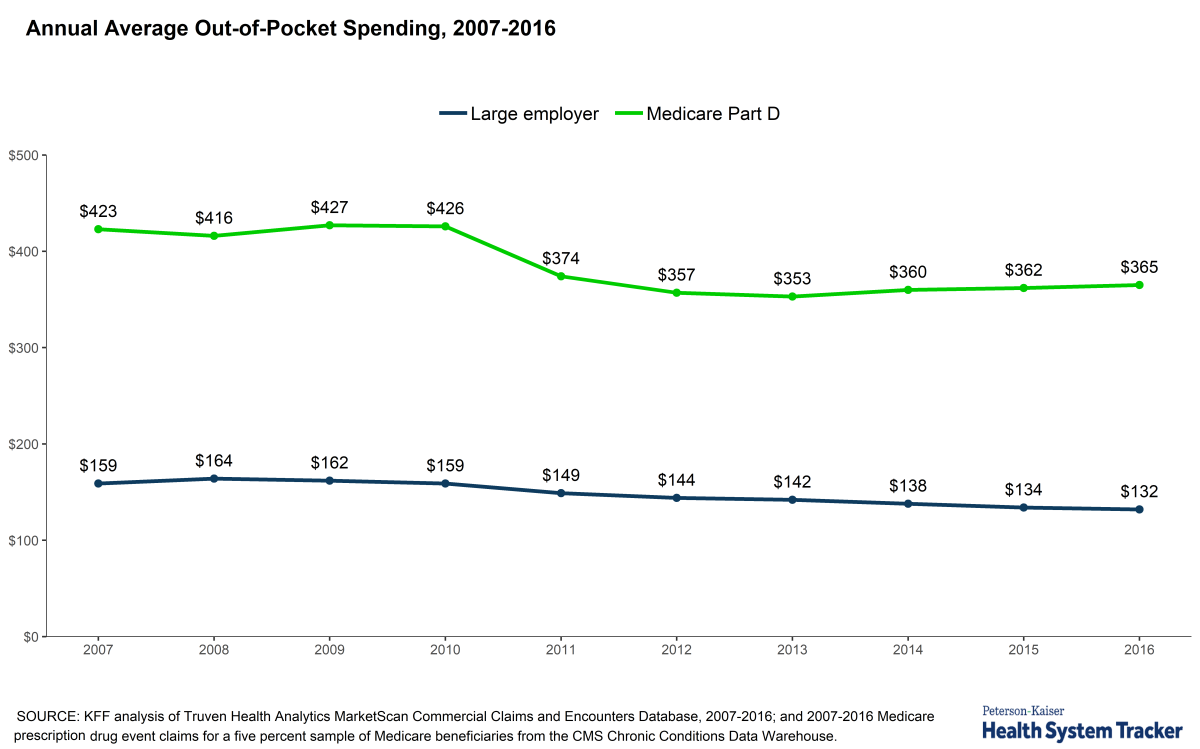 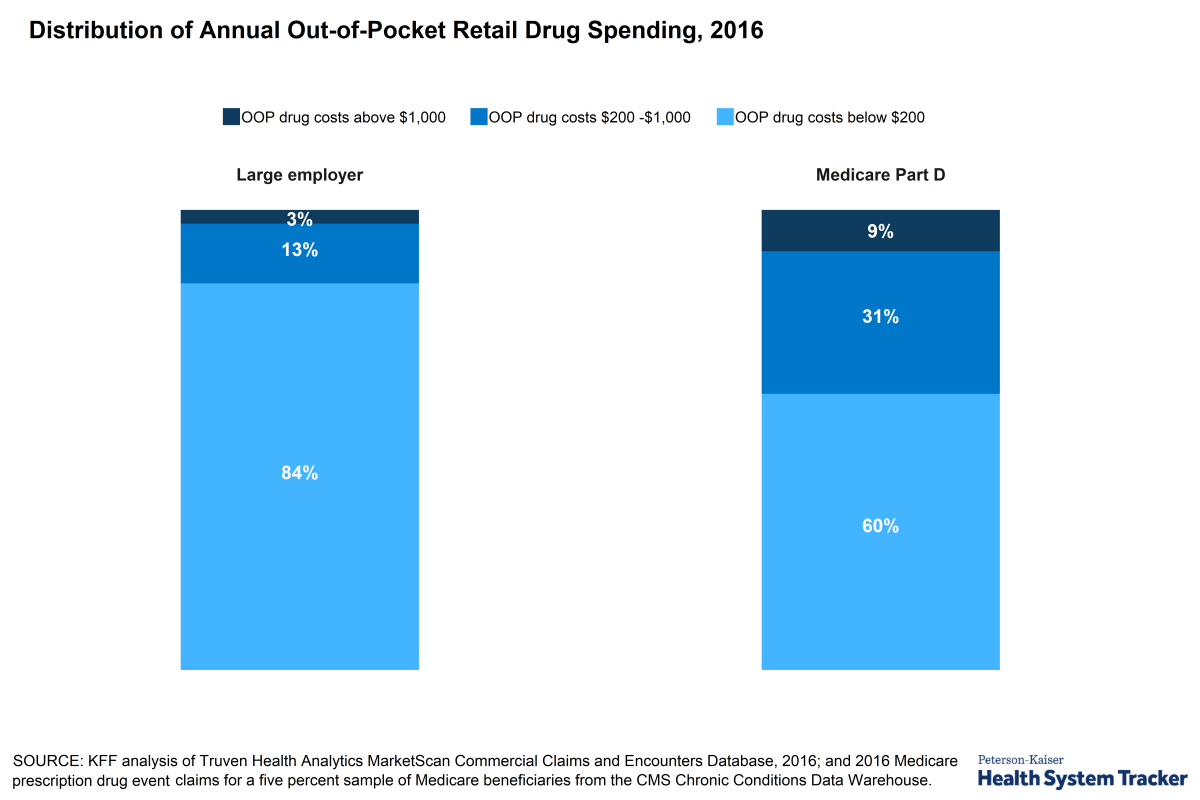 Our analysis of total retail prescription drug spending by payer and as a share of personal health care spending in 2017 is based on analysis of data from the National Health Expenditure Accounts (NHEA). Personal health care includes all medical goods and services that are rendered to treat or prevent a specific disease or condition in a specific person. Prescription drug expenditures in the NHEA include the retail sales of human-use dosage-form drugs, biological drugs, and diagnostic products that are available only by a prescription. Drug spending in the NHEA is adjusted to account for manufacturers’ rebates that reduce payers’ net payments for prescription drugs.

We analyzed a sample of medical claims obtained from the Truven Health Analytics MarketScan Commercial Claims and Encounters Database, which contains claims information provided by large employer plans. We used a subset of claims from the 2016 data. We only included claims for people under the age of 65 and people who were enrolled in a plan for more than half a year. Weights were applied to match counts in the Current Population Survey for enrollees at firms of a thousand or more by sex, age, state and whether the enrollee was a policy holder or dependent. This analysis used claims for almost 17 million people representing about 20% of the 86 million people in the large group market in 2016.

The MarketScan claims database contains information about health benefit claims and encounters for several million individuals each year provided by large employers. The advantage of using claims information to analyze out-of-pocket spending is that we can look beyond plan provisions and focus on actual payment liabilities incurred by enrollees. A limitation of these data is that they reflect cost sharing incurred under the benefit plan and do not include balance-billing payments that beneficiaries may make to health care providers for out-of-network services or out-of-pocket payments for non-covered services. Drug spending paid for by someone other than an enrollee’s insurer, drugs administered in an inpatient setting or not classified under the controlled substance act were excluded.

Each prescription drug claim was counted as a single prescription regardless of the quantity or strength of that prescription. Drugs with the same product name but separate entries in the MarketScan claims database corresponding to products with different delivery mechanisms and/or dosage forms are reported separately. Total spending does not include any rebates that may reduce the cost of the drug. MarketScan’s Red Book was used to classify drugs by the therapeutic/pharmacologic category of the drug product. Analysis of average total and out-of-pocket spending per user by drug (Figures 8 and 9) excludes drugs used by fewer than 500 (unweighted) enrollees.

We used data from the 2016 Medicare Part D prescription drug event (PDE) claims data from the Centers for Medicare & Medicaid Services (CMS) Chronic Conditions Data Warehouse (CCW) for a five percent sample of Medicare beneficiaries. Our five percent sample for 2016 includes 2,149,486 Part D enrollees (42,989,720 weighted) and 1.5 billion prescription drug events. The PDE claims data includes all prescription drug events reported by Part D plans for their enrollees in a given calendar year, and includes detailed data on spending for each event, corresponding to a single prescription drug fill, including how much was paid by plans, low-income subsidy amounts, and beneficiary out-of-pocket payments. The claims data includes spending for Part D covered drugs, but doesn’t include spending on Part D plan premiums, Part B covered drugs (which are typically administered in providers’ offices or hospital outpatient settings), or the cost of drugs purchased outside the Part D plan.

We calculated aggregate and per user average total and out-of-pocket drug spending for Part D enrollees overall, including beneficiaries with and without Part D low-income subsidies, and beneficiaries enrolled in both stand-alone prescription drug plans (PDPs) and Medicare Advantage prescription drug plans. Total spending reflects payments from all payers, including beneficiaries (out-of-pocket cost sharing amounts), but does not include rebates and discounts from pharmacies and manufacturers that are not reflected in prices at the pharmacies. Out-of-pocket costs are those paid directly by beneficiaries, not including amounts that other parties might pay on their behalf and not including the value of the manufacturer discount on brand-name drugs in the coverage gap. Drugs with the same product name but separate entries in the Part D claims data corresponding to products with different delivery mechanisms and/or dosage forms are reported separately. MarketScan’s Red Book was used to classify drugs by the therapeutic/pharmacologic category of the drug product. Analysis of average total and out-of-pocket spending per user by drug (Figures 8 and 9) excludes drugs used by fewer than 500 (unweighted) enrollees.

We used the CMS State Drug Utilization data, provided by states to CMS. These data reflect prescriptions provided through the Medicaid Drug Rebate Program. The data presents Medicaid spending, total spending, and units for each National Drug Code (NDC) in each quarter, for managed care or fee-for-service, at the state or national level. The spending data do not include any rebates, and do not include drugs purchased through 340B. Drugs with the same product name but separate entries in the Medicaid claims data corresponding to products with different delivery mechanisms and/or dosage forms are reported separately. MarketScan’s Red Book was used to classify drugs by the therapeutic/pharmacologic category of the drug product. We are unable to report average total spending per user for Medicaid prescription drug spending because the data do not include per user counts for each drug.