On several indicators of healthcare quality, the U.S. falls short

While there are widely agreed upon ways to measure spending on healthcare, measuring the quality of care delivered is a more difficult undertaking with less consensus on the best metrics and less systematic data available. Simple measures of health outcomes (like life expectancy and mortality rates), while readily available, are complicated by the fact that they are influenced not only by the quality of care patients receive but also by factors outside of the health system like socioeconomic factors and scientific advancements. Another way to measure healthcare quality is to look at provider activities or short-term results following treatment. These “process” indicators are more easily attributable to provider quality, but the data are often spotty and the extent to which a handful of indicators represent overall healthcare quality is not clear.

While data are limited, the OECD makes available several indicators of healthcare quality – both outcomes and process measures – for the U.S. and other member countries. In our latest chart collection (below), we look at these data, as well as data from the Institute for Health Metrics and Evaluation (IHME), academic researchers, and the Commonwealth Fund, to see how healthcare quality in the U.S. compares to that of other wealthy and sizable nations (those with above median GDP and GDP per capita in at least one of the past 10 years).

While the U.S. and comparable countries have seen improvements in several health outcomes in recent years, the U.S. still lags behind other countries on many available measures. The U.S. has higher rates of overall mortality, premature death (Potential Years of Life Lost), and preventable death (or, deaths amenable to health care) than comparable countries do on average. For each of the leading causes of death, the U.S. has higher-than-average mortality rates, with the exception of cancer. (While there is debate over the best way to measure outcomes for cancer, the U.S. typically performs better in both mortality rates and five-year survival rates for breast and colorectal cancer).

Looking beyond mortality, data from the Institute for Health Metrics and Evaluation suggests that the U.S. also has the highest rates of disease burden relative to comparable OECD countries. Disability Adjusted Life Years (DALYs) are a measure of disease burden that accounts for both premature deaths and the number of years lost to disability. The U.S. has the highest rate of age-standardized DALYs of all comparable countries.

The OECD quality database also includes data on shorter-term health outcomes and provider processes. Hospital admissions for preventable diseases – including congestive health failure, asthma, and diabetes complications – are more frequent in the U.S. than in comparable countries, as are foot and leg amputations due to diabetes. These data indicate that the preventive services may not be delivered or adhered to as well as they could be. However, the U.S. has made significant progress at reducing diabetes-related amputations. 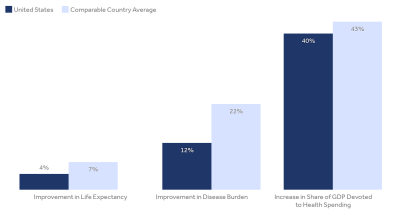 Health outcomes shortly following treatment for heart attack and ischemic stroke appear to be better in the U.S. than in comparable countries, as the U.S. has lower 30-day mortality rates for these types of admissions (among patients 45 and older).  However, the U.S. falls behind on some indicators of surgical quality, having higher rates of problems arising from blood clots (pulmonary embolism and deep vein thrombosis) and retained surgical items than comparable countries. The U.S. also has relatively high rates of trauma during vaginal delivery.

While the U.S. performs relatively poorly on many of the available indicators of healthcare quality, there are signs of improvement.  Trend data are not always available, but where they are available, the trend is generally positive. The U.S. has made notable improvement in rates of mortality, premature death, DALYs, surgical device retention, obstetric trauma, and lower extremity amputations in recent years. 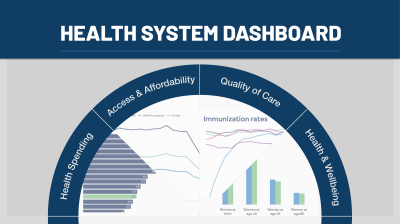