What impact has the coronavirus pandemic had on healthcare employment?

The coronavirus pandemic and subsequent public health response have led to extraordinary job loss in the United States. From February through May 2020, overall employment decreased 13% as roughly 20 million people lost work.

This chart collection examines where changes in healthcare employment have been concentrated and what these changes might tell us about short-term health spending. While the health sector has typically been insulated from job loss during periods of economic recession, the current economic downturn is unique in that it is driven by a pandemic. Out of concern that hospitals would be overwhelmed by COVID-19 cases and that staffing and supplies would be limited, non-emergency, elective, or routine medical services were delayed or cancelled. Additionally, out of concern of contracting the virus, some people went without medical care they might otherwise have received. As a result, healthcare revenue fell sharply in March and April, and more than 1.5 million healthcare jobs were lost from February through April 2020. Health services recovered more than 300,000 jobs in May, mainly in dental offices, but employment in certain healthcare settings continued to decrease.

Employment in healthcare settings decreased drastically from February through April, but rebounded slightly in May 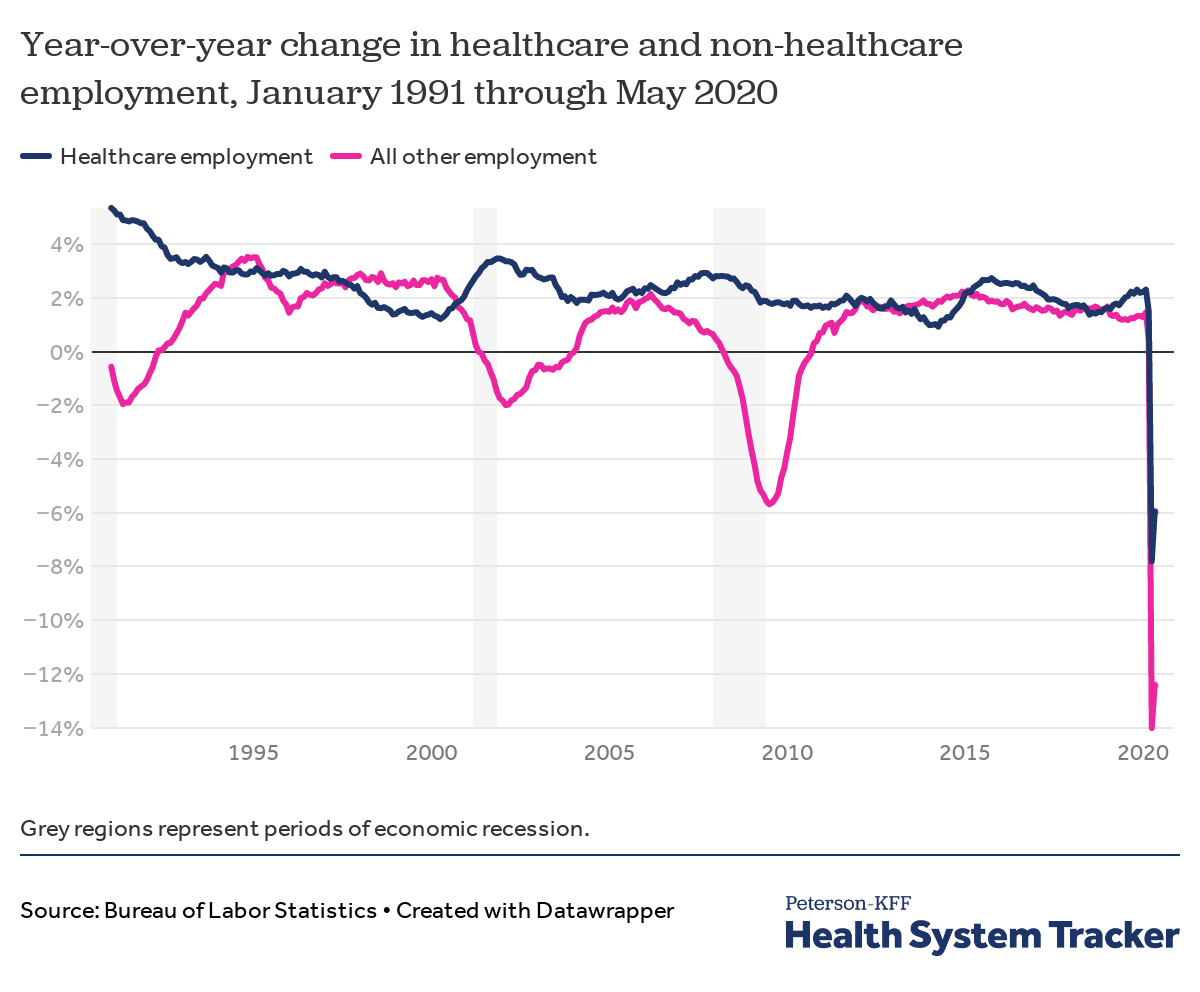 Because health employment has dropped less than employment in other sectors, healthcare workers now account for a larger share of the employed workforce than they did a few months ago (from 10.8% in February up to 11.5% in May). Importantly, these employment numbers do not account for people whose hours were cut or pay decreased, rates of which could differ across sectors.

Ambulatory healthcare settings experienced sharper job losses through April, but were the only settings to begin recovering jobs in May

Pandemic-related job loss among healthcare workers has been primarily concentrated in office-based settings. Of the 1.5 million healthcare jobs lost from February through April, 521,000 (35%) were among staff in dental offices. However, dental offices recovered 245,000 jobs in May, which accounts for roughly half (47%) of the dental jobs lost since the start of the pandemic, 78% of all healthcare jobs added in May, and 10% of total jobs added in May. Dental offices were particularly hard hit since most practices were only seeing emergency patients and many others had closed entirely in order to avoid transmission of COVID-19 and conserve personal protective equipment. In May, many dental offices began to reopen or increase their patient load, however, overall employment at dental offices remained 30% lower than in February.

Combined, workers at physicians’ offices (-11%; -290,000 jobs) and the offices of other healthcare practitioners (-24%; -233,000 jobs) accounted for another third (32%) of total healthcare jobs lost from February through April. However, physicians’ offices experienced a 2% increase in employment in May, and the offices of other health practitioners also saw a 10% increase in employment. Hospitals (-2%; -122,000 jobs) and nursing and residential care facilities (-4%; -123,000 jobs) had relatively fewer job losses through April, but were among the few settings to continue losing jobs in May. 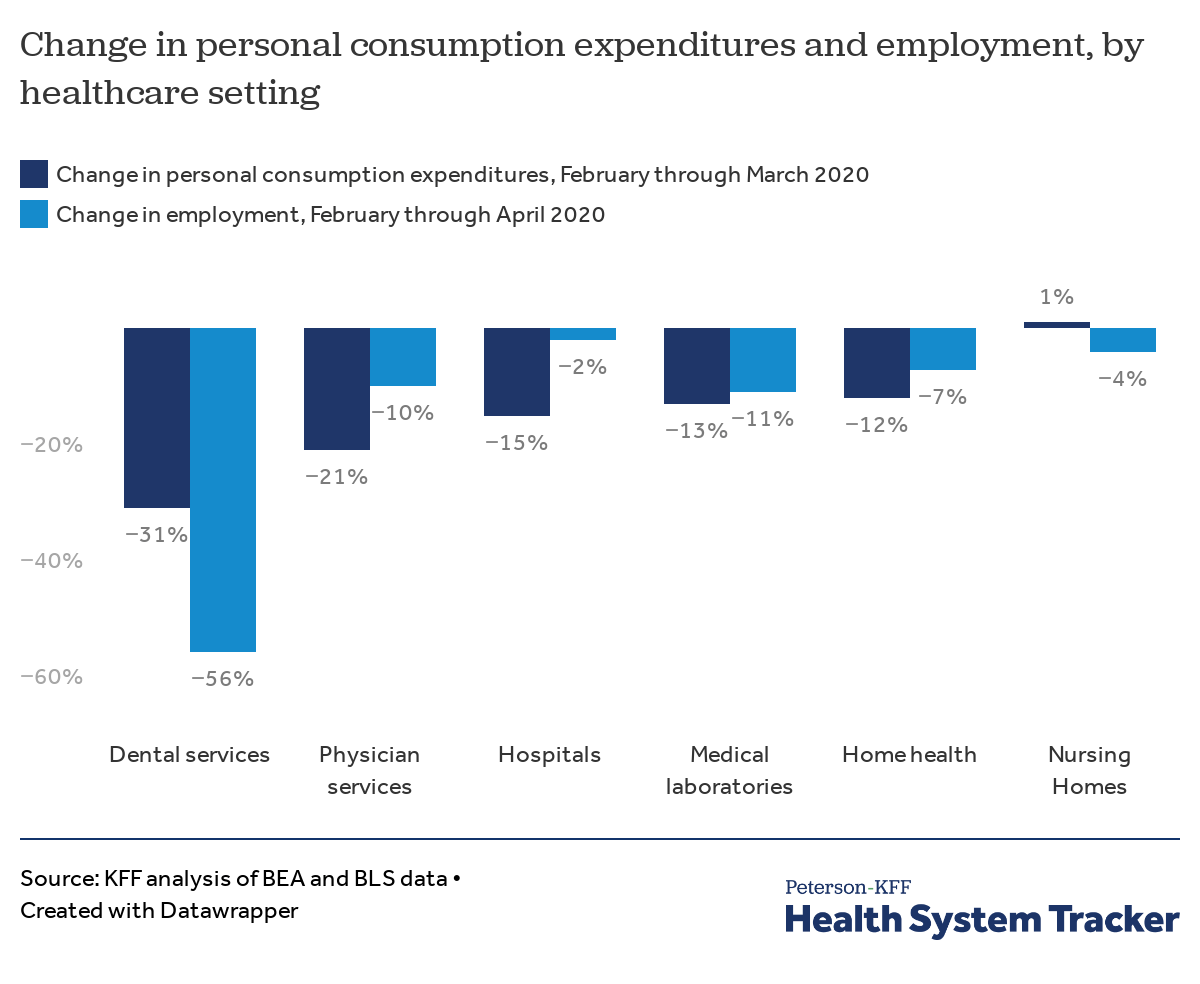 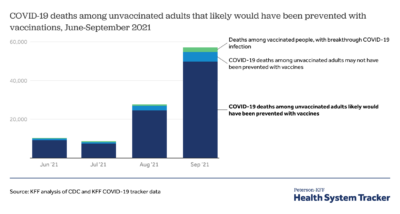 COVID-19 continues to be a leading cause of death in the U.S. in September 2021 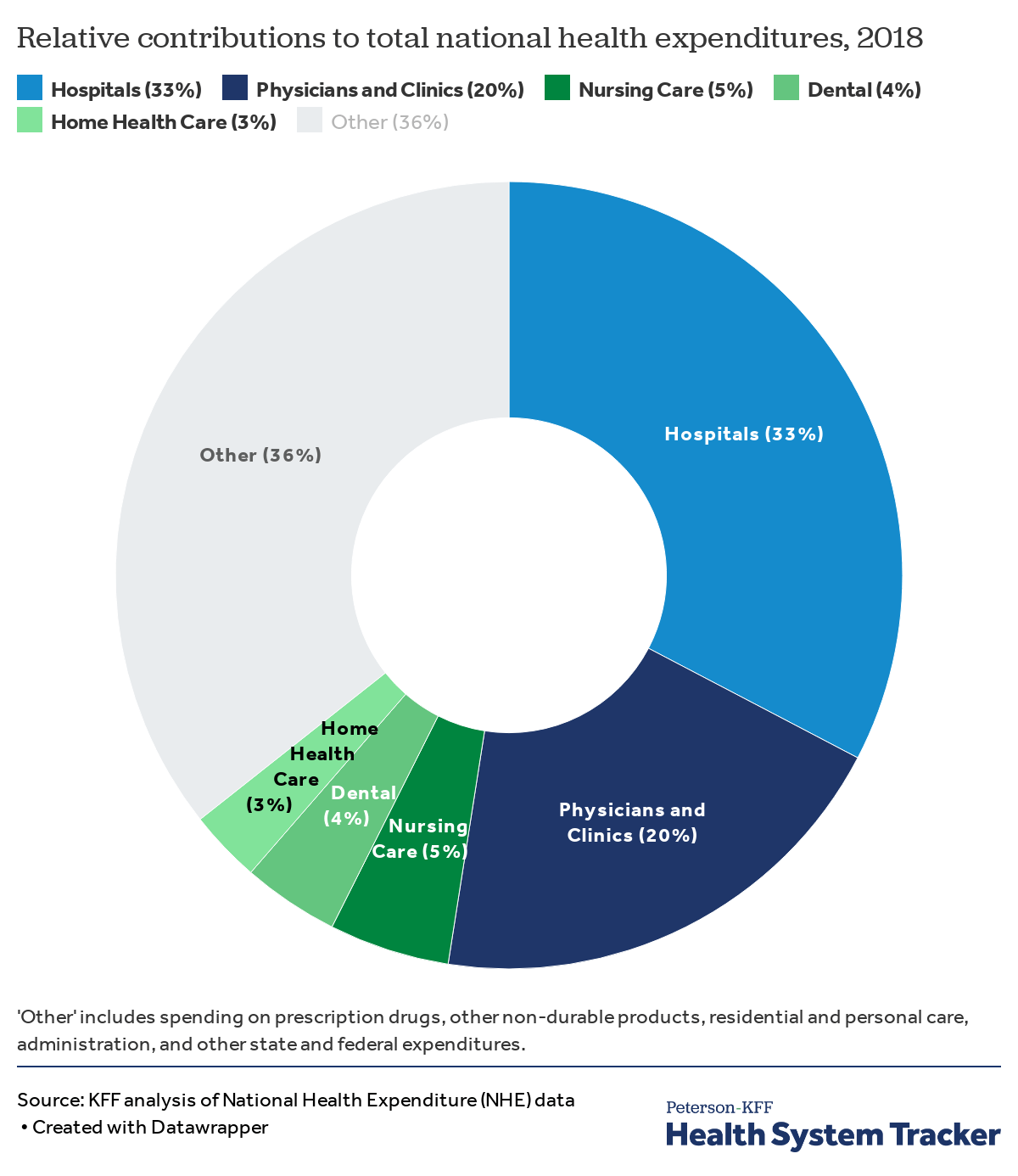 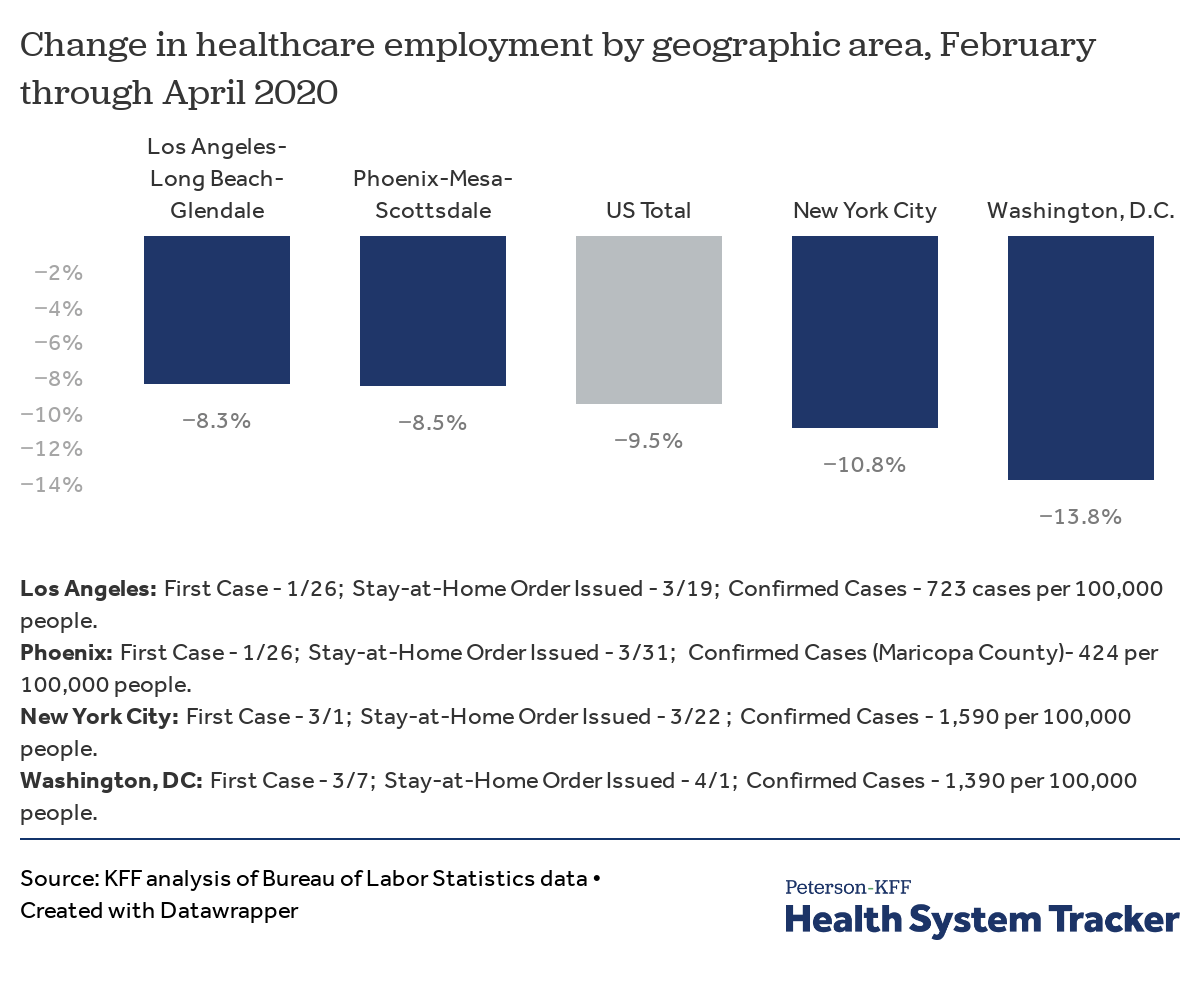 Not all areas of the country have experienced the same degree of healthcare job loss, which could be driven by differences in coronavirus cases, local responses, economic circumstances, and other factors. Local area data for the month of May are not yet available, but healthcare employment in Washington, D.C. decreased 13.8% from February through April. New York City (NYC), the epicenter of the pandemic in the U.S., also experienced a sharper decline (-10.8%) in healthcare employment than the national average (-9.5%). In comparison, healthcare job losses in the Los Angeles (-8.3%) and Phoenix areas (-8.5%) have been a bit lower than the national rate. New York City and Washington, D.C. have much higher rates of COVID-19 cases per capita than Phoenix and Los Angeles, and yet the former two cities have seen steeper drops in healthcare employment so far during the pandemic. 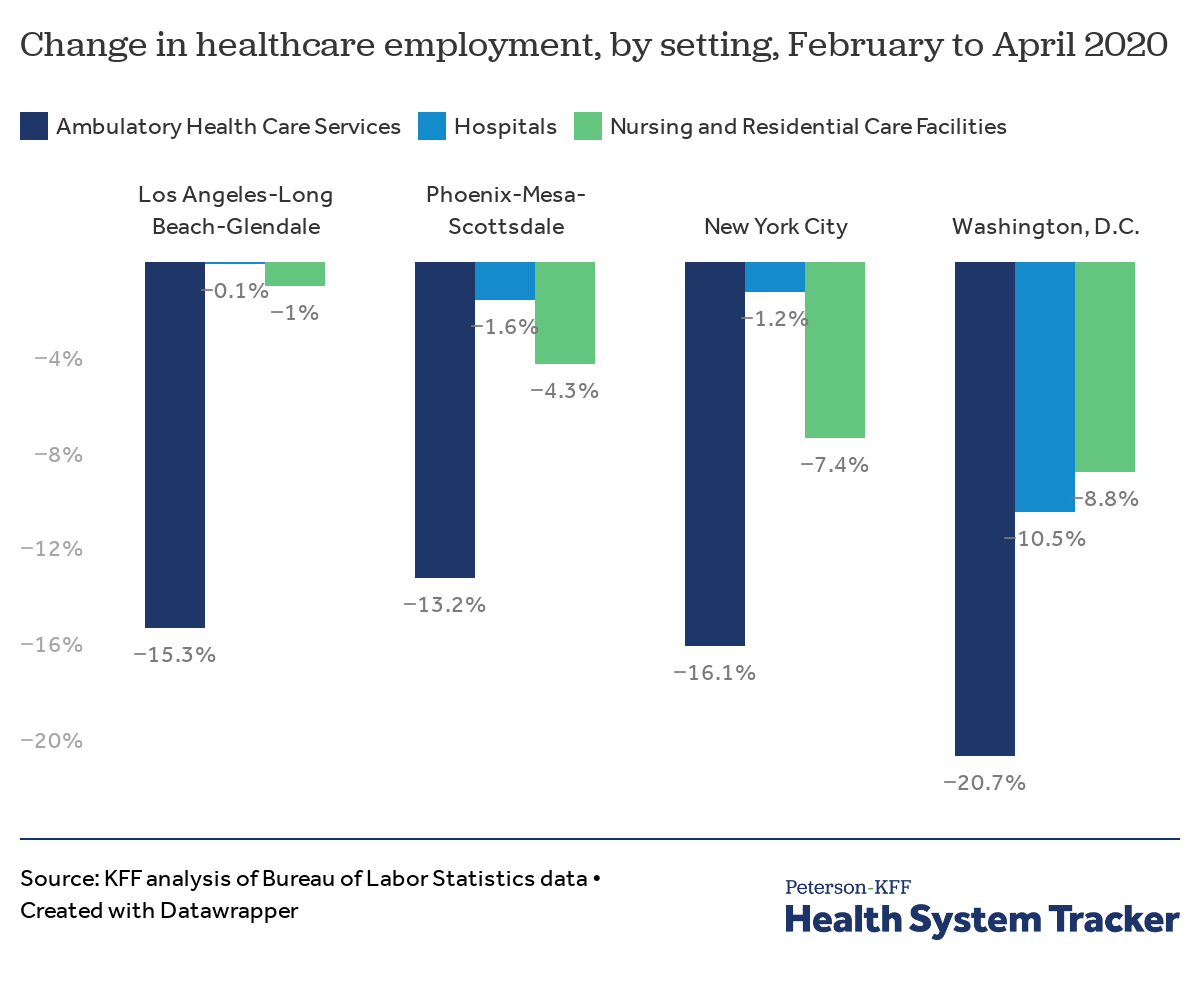 Ambulatory healthcare services, including offices of physicians, dentists, and other health practitioners, saw the steepest drops in employment across all areas. From February through April 2020, employment in ambulatory healthcare settings decreased 20.7% in D.C., 16.1% in NYC, 15.3% in the Los Angeles area, and 13.2% in the Phoenix area. Employment in nursing and residential care facilities fell more sharply in D.C. (-8.8%) and NYC (-7.4%) than the Los Angeles (-1.0%) and Phoenix areas (-4.3%). 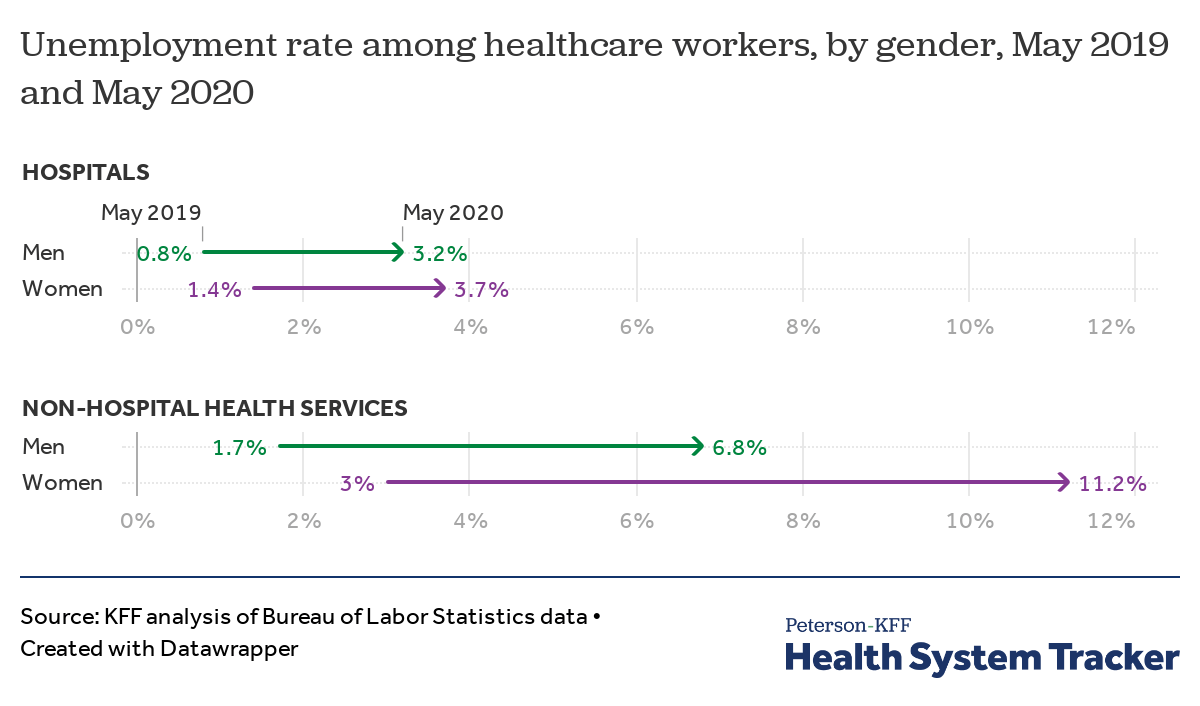 Women have endured more job loss in the healthcare sector since the start of the pandemic. For context, women make up three-quarters of the healthcare workforce and an even greater share of lower-paid positions. From May 2019 to May 2020, the unemployment rate among women who normally work in hospitals increased from 1.4% to 3.7%, which was roughly equivalent to the increase for men over the same period (0.8% to 3.2%). However, the unemployment rate for women who normally work in non-hospital healthcare settings increased from 3.0% to 11.2%, much higher than the rate increase for men (1.7% to 6.8%).

Decreases in healthcare employment during the early months of the pandemic reflect the sizable drop in healthcare utilization and revenue. Dental services and office-based physician and clinical services have been particularly hard-hit by recent job loss, which correspond with sharp decreases in expenditures for these services. These settings, however, were the first to begin recovering jobs in May as social distancing began to ease and their patient loads gradually increased. Notably, nursing care facilities and hospitals continued to lose jobs through May. The long-term impacts on health spending and employment are uncertain, as it remains to be seen when and where healthcare utilization will pick up. 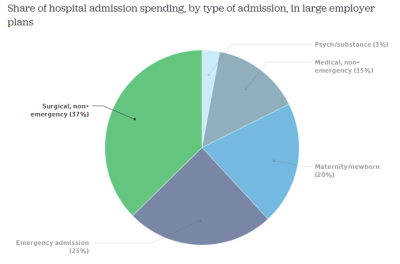